September 10, 2021, Victoria, BC – After Day 2 of the Zack Downey Memorial Baseball Tournament at Layritz Park in Victoria, both the Victoria Eagles and the Victoria Golden Tide remain undefeated with perfect 2-0 records after winning their round robin games Friday.

The teams will now face each other Saturday morning at 9:30 am in a game that will decide the top seed for the tournament heading into Sunday’s semi-final games. 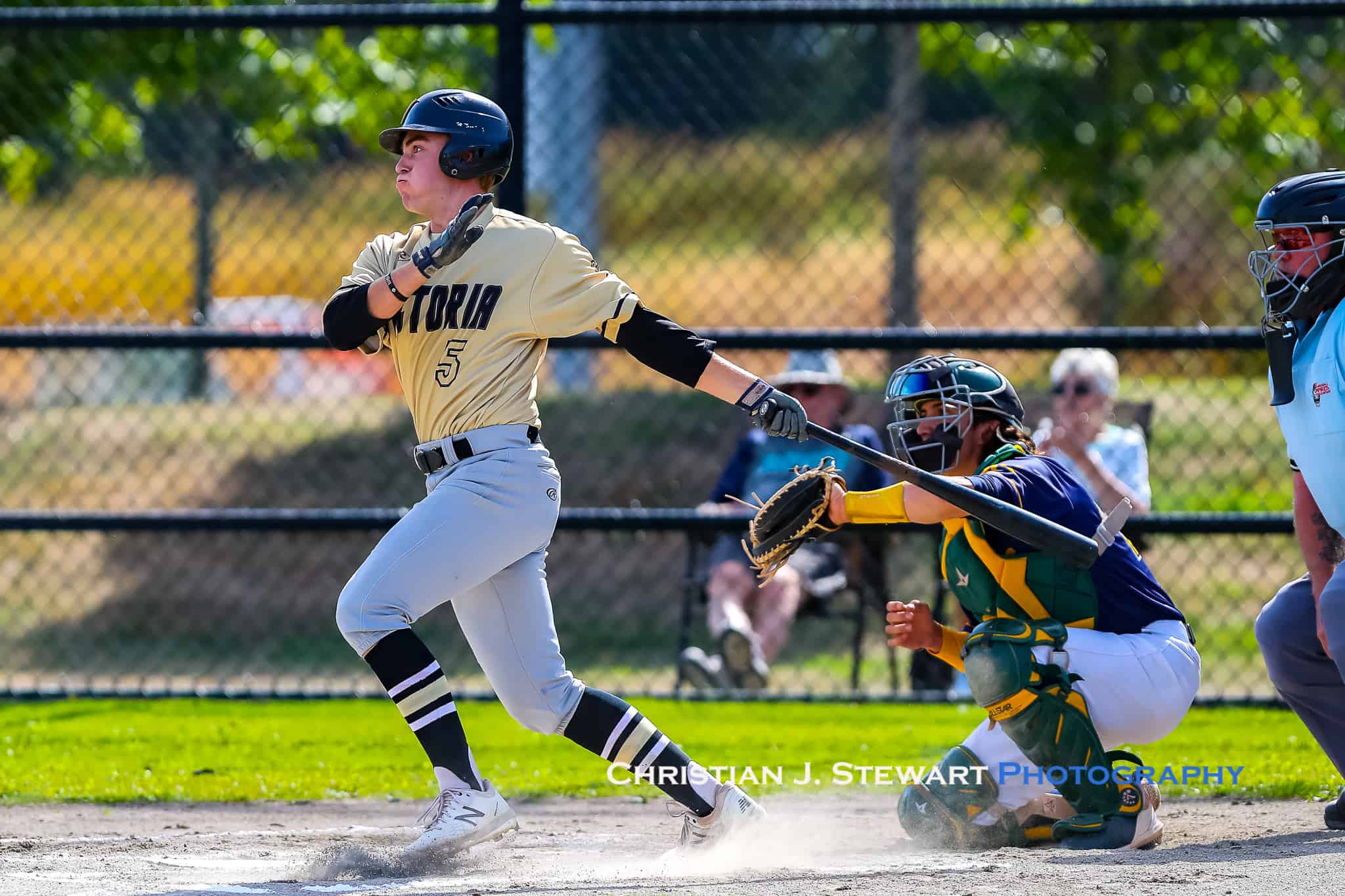 The Golden Tide’s Brandon Green had a triple, two singles, a walk, RBI and run scored to lead the Tide offence to their 8-1 win (Photo: Christian J. Stewart)

The Eagles began the day with a tidy 5-1 win over the Parksville Royals, getting a jump early as a two-RBI triple from Jai Berezowski in the first inning gave them an early lead. They would add two more runs in the third and another in the fourth to put the game away.

Damian Cataldo led the way with a walk, base hit and two runs scored to pace the offence, while Oliver Mabee had an RBI and a run scored.  Quin  Valley and Noah Couch scored the other runs for the Eagles. 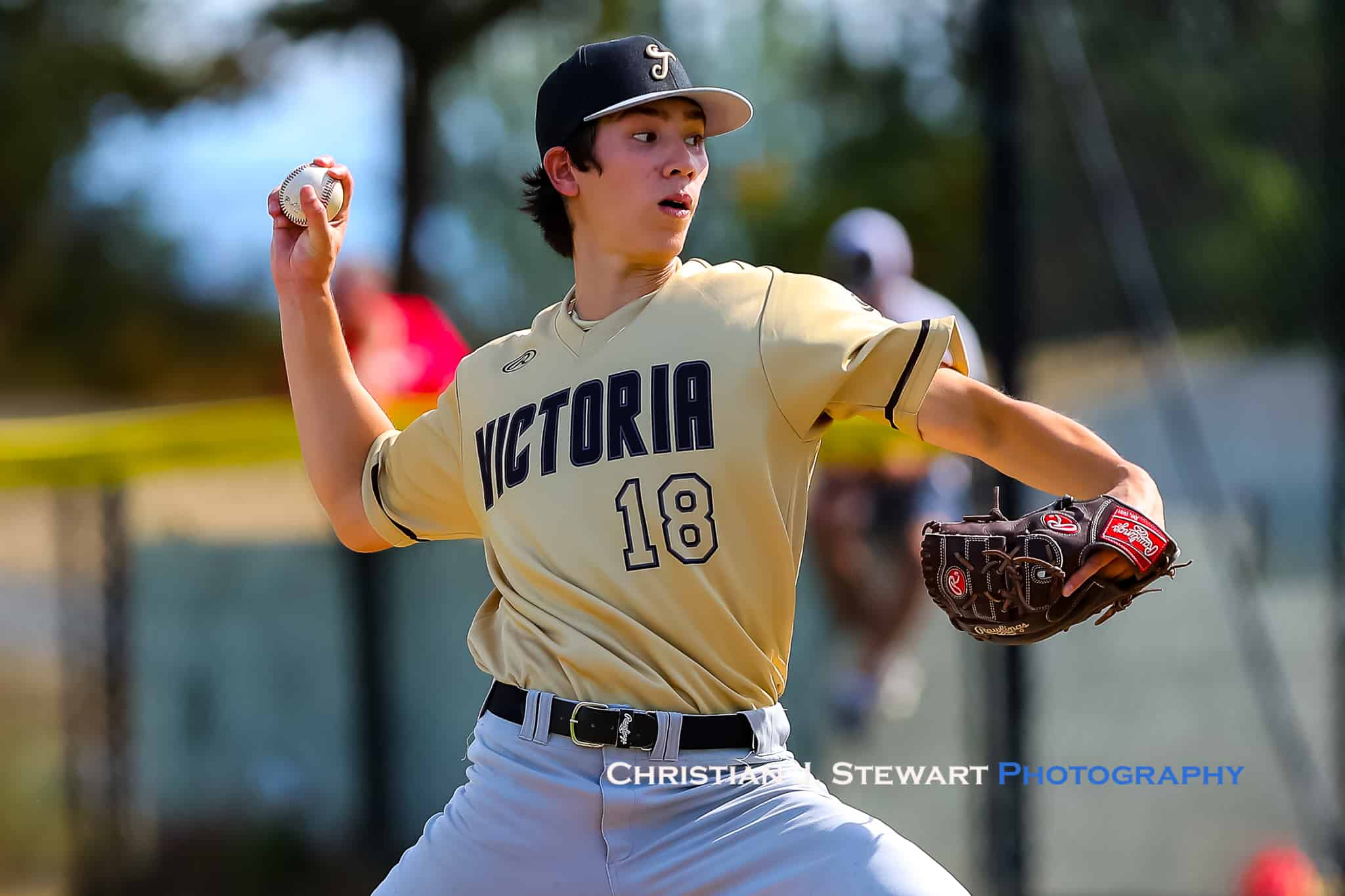 Nick Lee got the start for the Golden Tide against Saskatchewan (Photo: Christian J. Stewart)

Jacob Thompson got the start for the Eagles and he was solid through four innings.  Wyatt MacDonald also saw work in relief.

The Golden Tide kept their record clean with an 8-1 win over the visiting Saskatchewan Grizzlies High Performance team.

Brandon Green was the sparkplug for the Tide, with a pair of singles, a triple, walk, RBI and two runs scored. Chase Thomson also had a pair of hits, an RBI and run scored, while Andrew Baxter walked twice, reached on an error and scored. 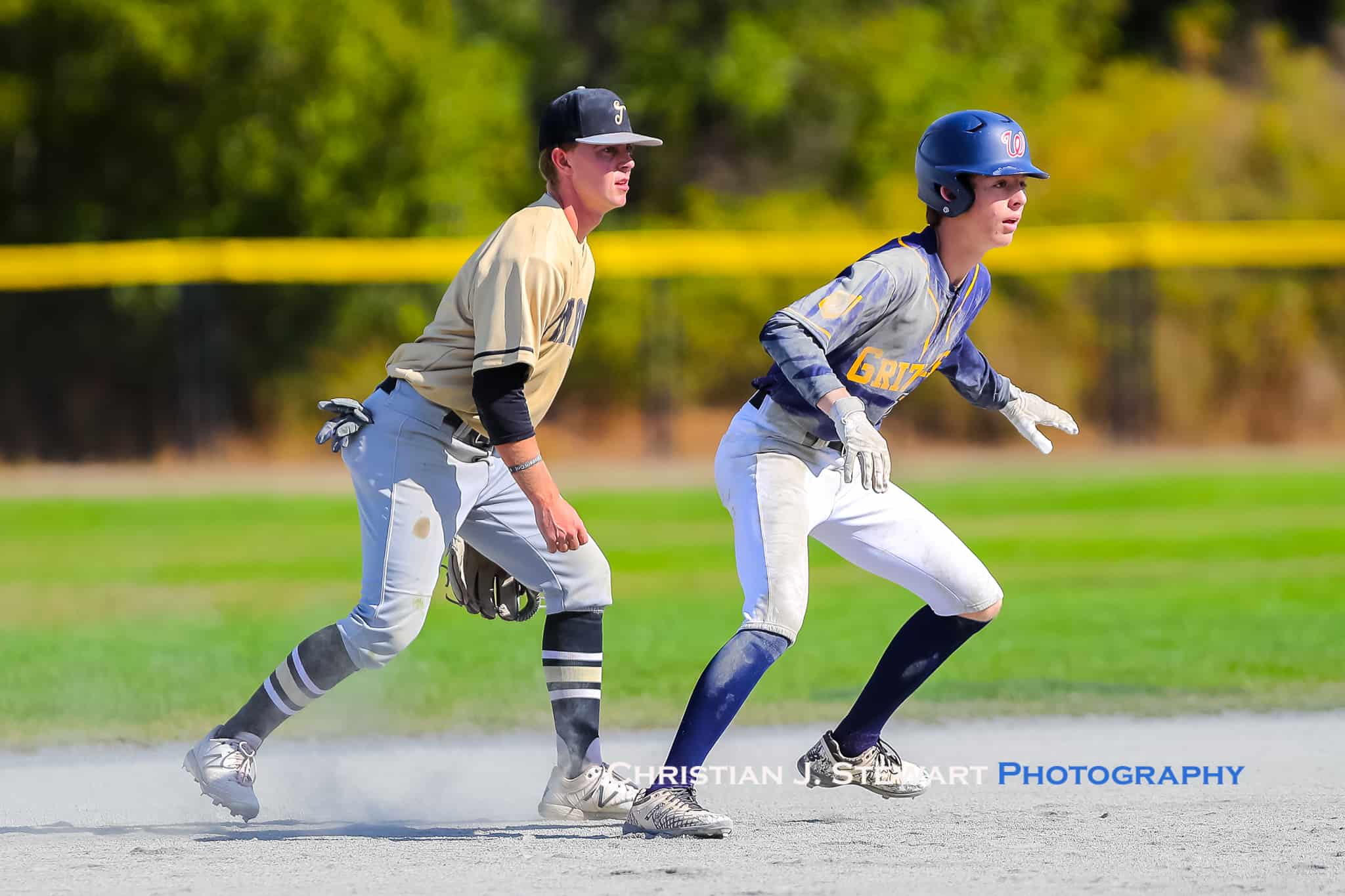 The Tide opened the scoring in the second, taking advantage of an error and then an RBI double from Jackson Cordle that the Grizzly outfielder lost in the sun. Cordle then scored on an RBI single from Green.

The Tide’s Colton O’Brien slides safely into second during the game against the Grizzlies (Photo: Christian J. Stewart)

They would add two more in the third on RBI singles from Thomson and Colton O’Brien, and then put the game away with three more in the fourth and another in the fifth.

Nick Lee got the start on the hill for the Tide and after a shaky first inning, he re-grouped to strikeout three of the last four batters he faced in his two innings of work.  Tristian Seitz and Brett Patterson also pitched two innings of relief each for the Tide. 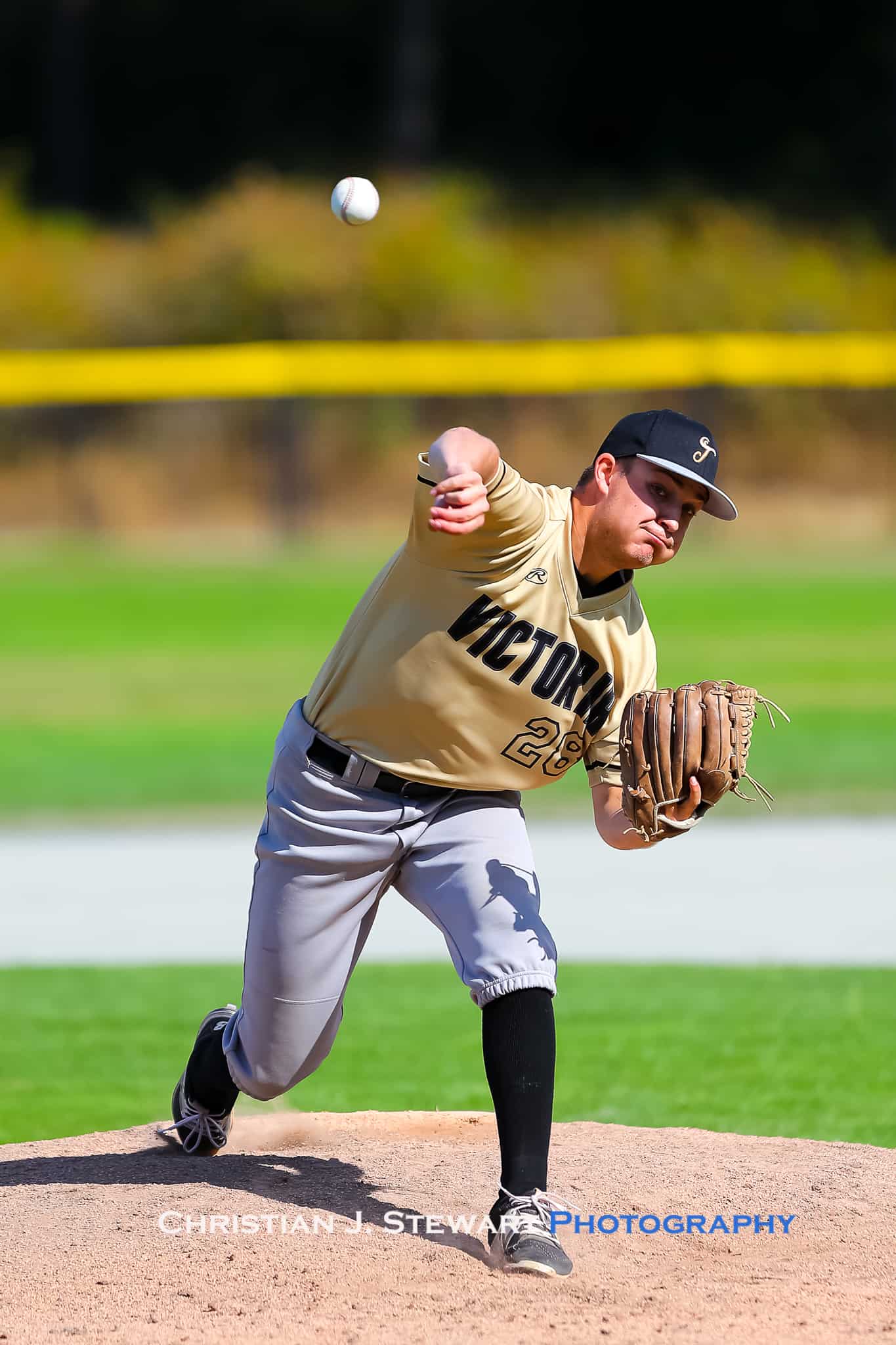 In other games Friday, the Parksville Royals (1-1) handed the Mid-Island Pirates their second loss of the tournament, winning 2-0, while the Victoria Mariners 0-2) dropped a 4-3 decision to the Saskatchewan Grizzlies (1-1) in the final game of the day.

The Tide’s Chase Thomson had a pair of hits against Saskatchewan (Photo: Christian J. Stewart) 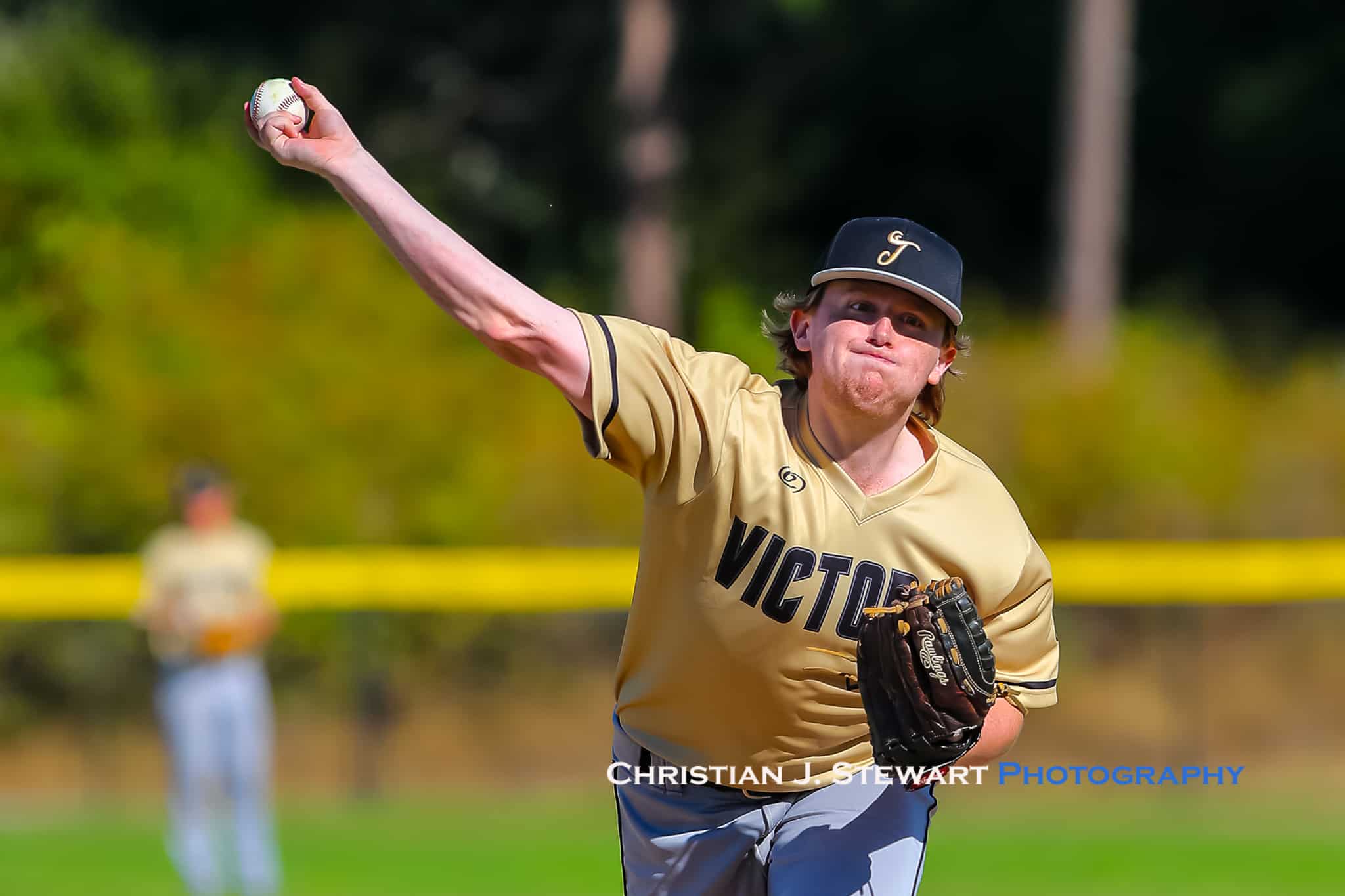 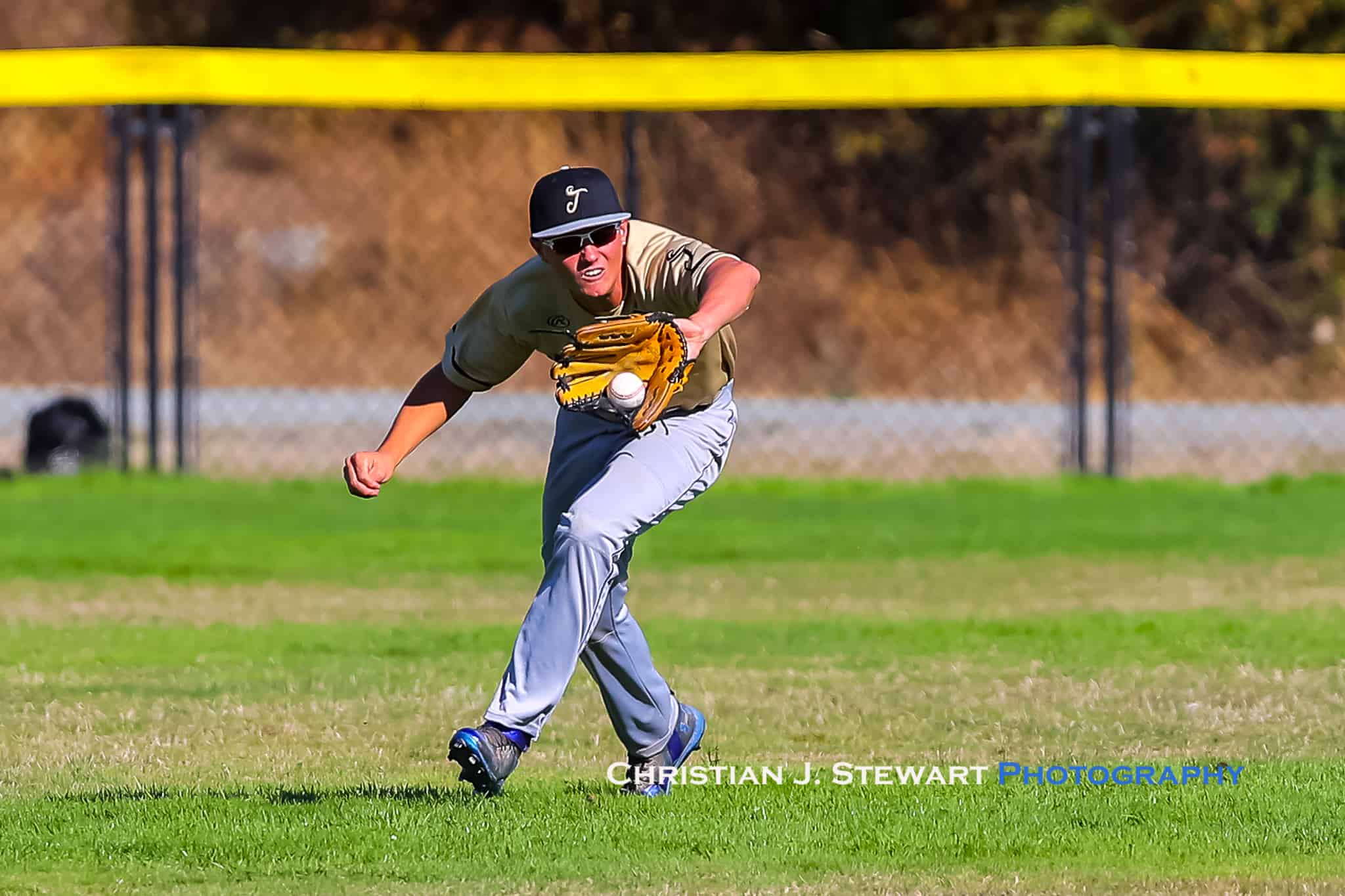 All photos from the Zack Downey Tournament by photographer Christian J. Stewart will eventually be posted following the tournament at https://christianjstewart.zenfolio.com/f925315517