October 2, 2021, Victoria, BC – The Victoria Golden Tide used a six-run eighth inning to overcome a 6-3 deficit and go on to a 9-6 win over the Victoria Mariners in exhibition baseball action Saturday night at Wilson’s Group Stadium at Royal Athletic Park in Victoria.

Nate Horricks got the start for the Tide and he and his defence struggled early, giving up three errors, as the Mariners got to him for three runs in the top of the first inning, without a hit.  The Tide would respond with a pair of runs in the bottom of the inning, as Mariners starter Matt Druin would also struggle to find his control. 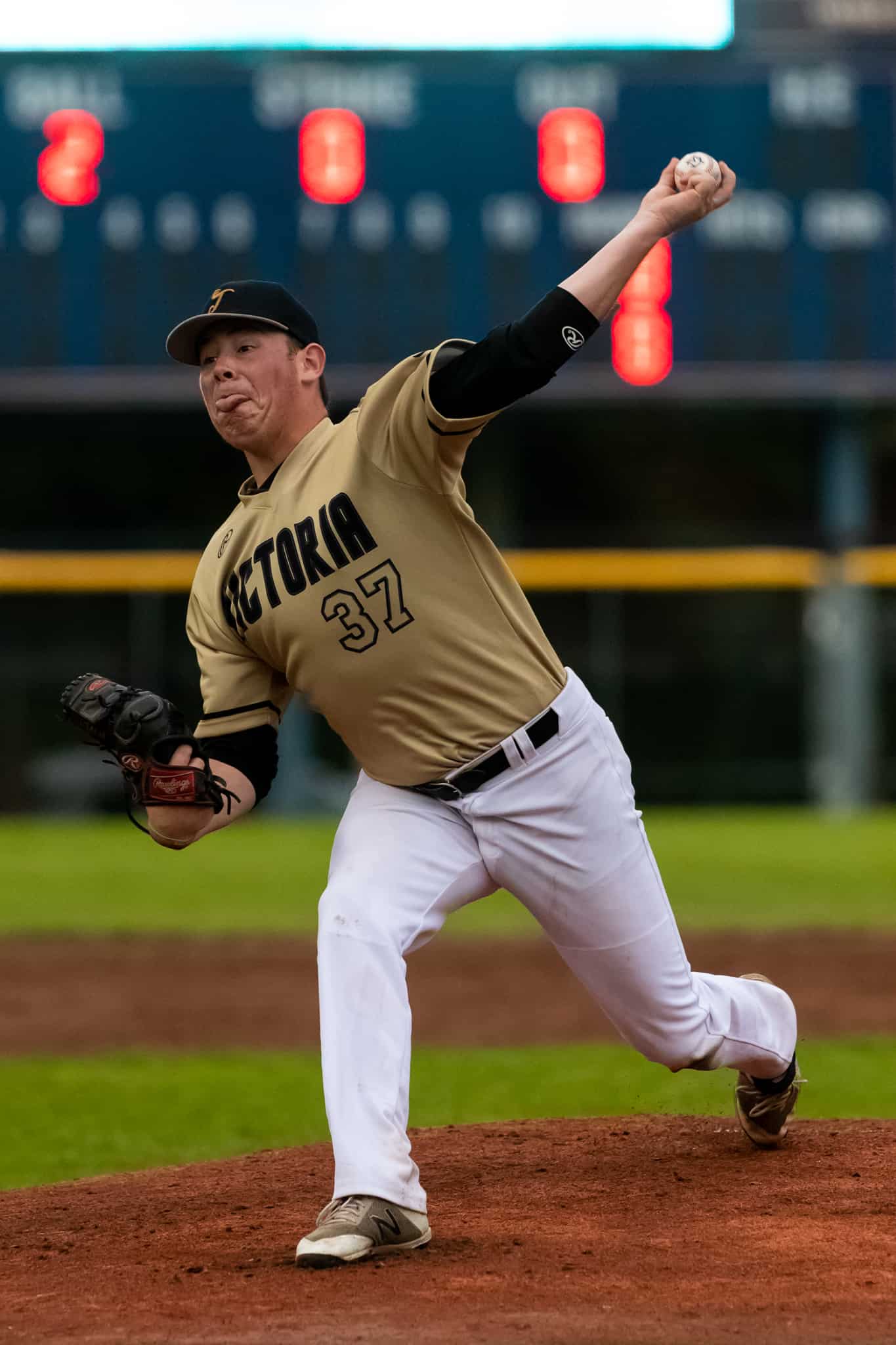 After the half-hour first inning was over, both teams had to take a break as the lights at Royal Athletic Park malfunctioned and had to be rebooted.  This took about 20 minutes, but it served to reset the pitching on both sides, as neither team could mount much in the way of offence for the next few innings. 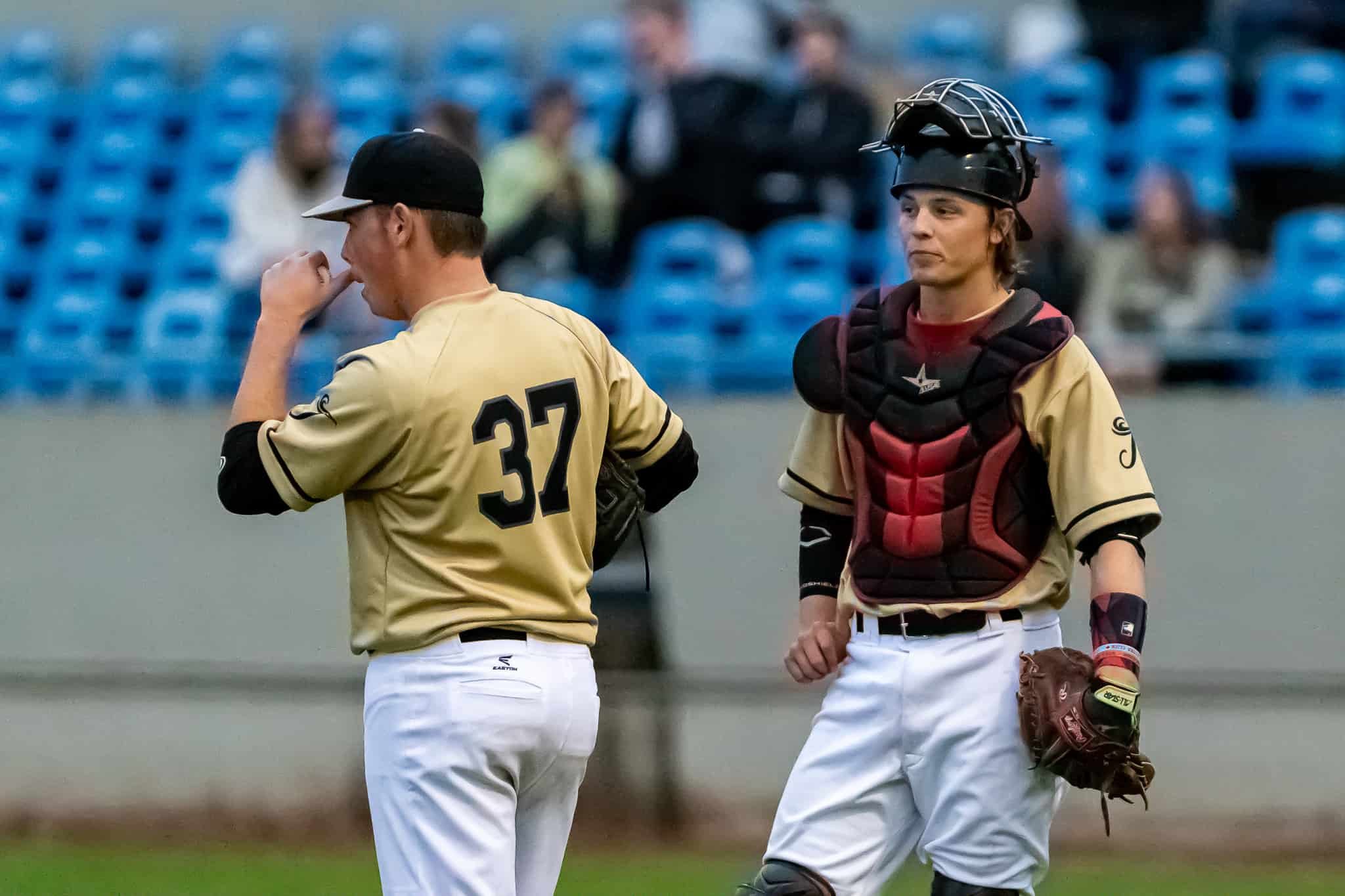 Nate Horricks and Parker Harris wait out a light delay

The Tide would not give up however and a two-RBI single from Daniel  Sawchyn in the bottom of the eighth, and a wild pitch that eventually scored Sawchyn pulled the Tide into a 6-6 tie. After another run scored, to give the Tide their first lead of the game, they would load the bases for Ryan Deagle who stroked a single into right scoring two and giving the Tide a 9-6 win heading to the ninth. 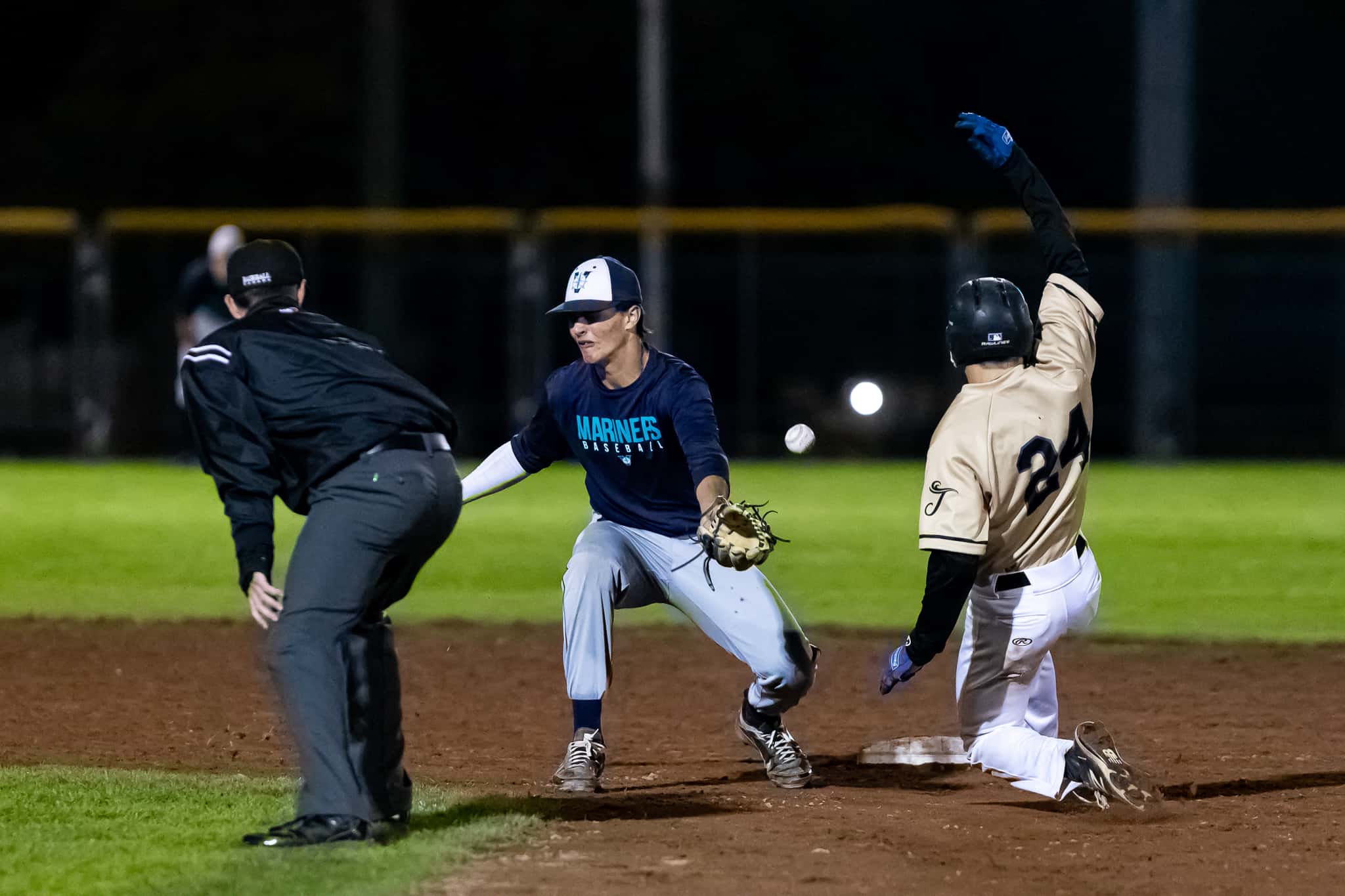 Brady Wilson would throw a 1-2-3 ninth to close things out in regulation time, however given this was an exhibition game, both teams agreed to play the bottom of the ninth with no additional scoring happening.

In other action Saturday, the Golden Tide split-squad travelled to Kamloops to take on the TRU Wolfpack, losing game one 5-4 and then dropping the second game 7-6 as the Wolfpack would walk it off with two runs in the bottom of the ninth. 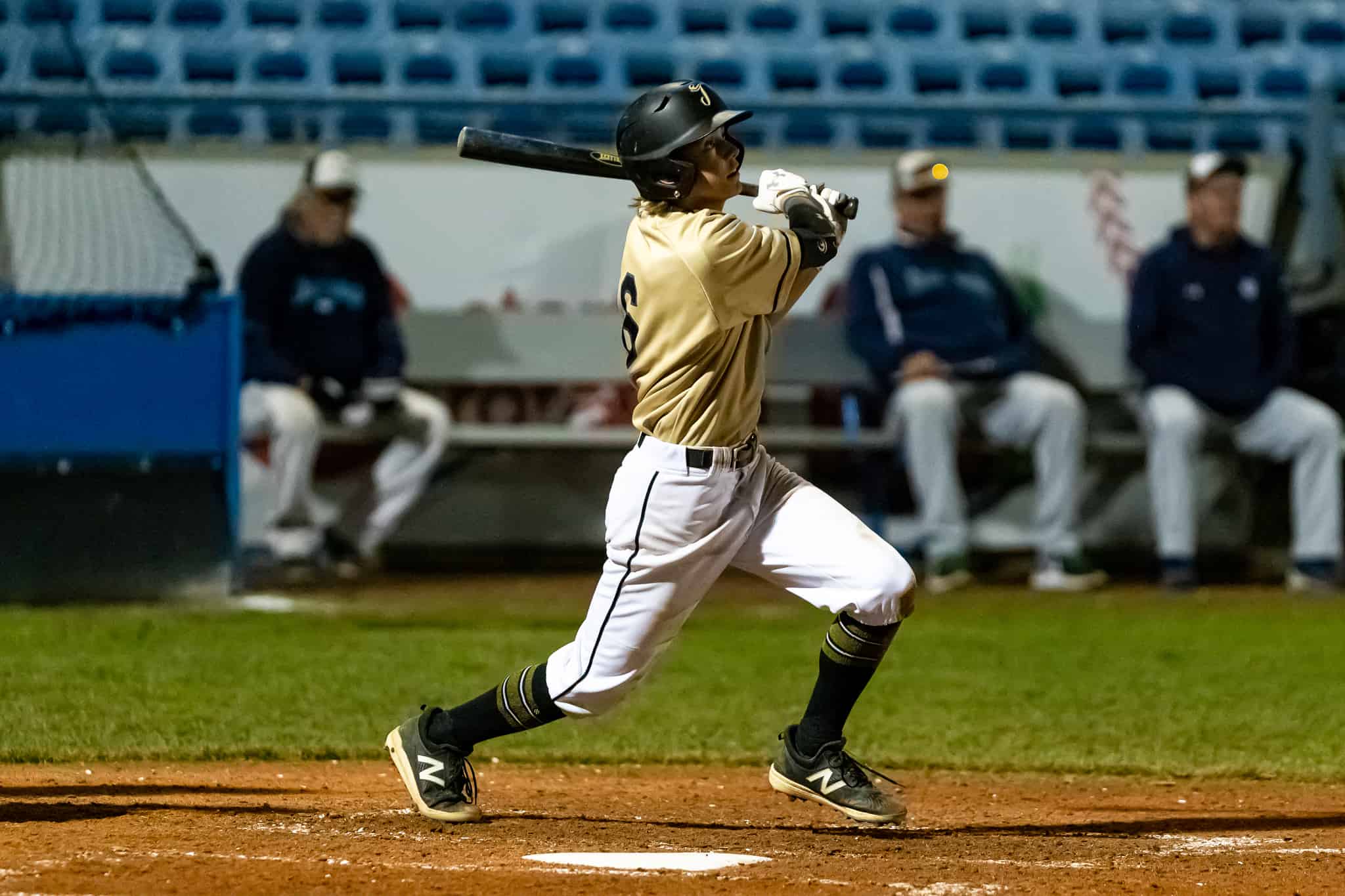 Chase Thompson had a hit early for the Tide (Photo: Christian J. Stewart)

Next action for the Golden Tide is the CCBC Fall Championship tournament in Kelowna over the Thanksgiving weekend.  The Golden Tide will play Calgary on Friday, Fraser Valley on Saturday and the Wolfpack on Sunday in their round robin games and then hope to advance to the semi-finals on Sunday and the final on Monday. 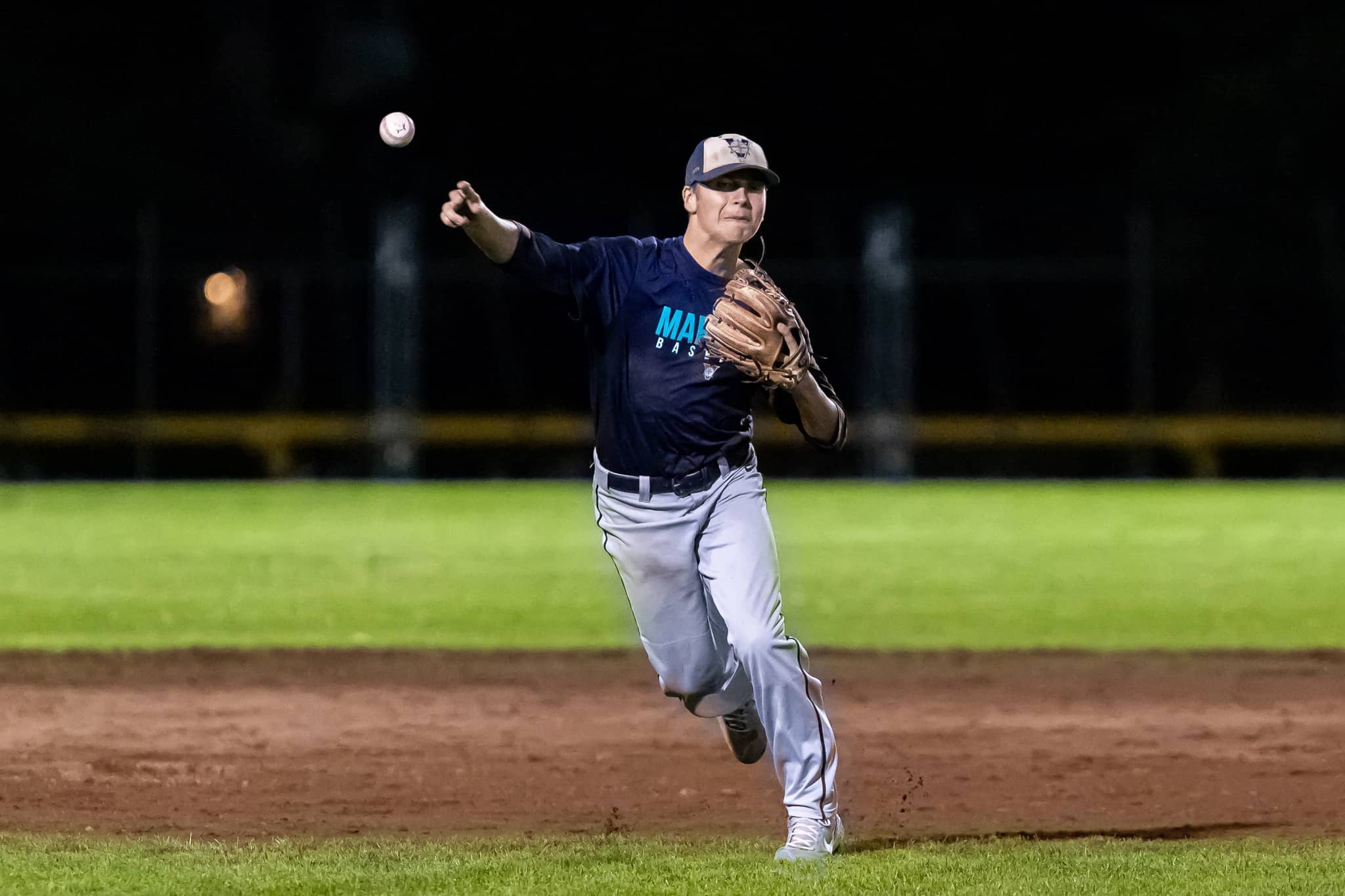 The Tide return to Wilson’s Group Stadium for a Black vs Gold intersquad double-header on Saturday October 16 at 1PM and the will host the UBC Thunderbirds on Sunday the 17th, also a 1PM start.