September 12, 2021, Victoria, BC – The Victoria Golden Tide scored eight runs in the final two innings, but it would not be enough to overcome a 10-1 deficit and the Tide fell to the Saskatchewan Grizzlies in the semi-final of the Zack Downey Memorial Tournament Sunday morning at Layritz Park in Victoria. 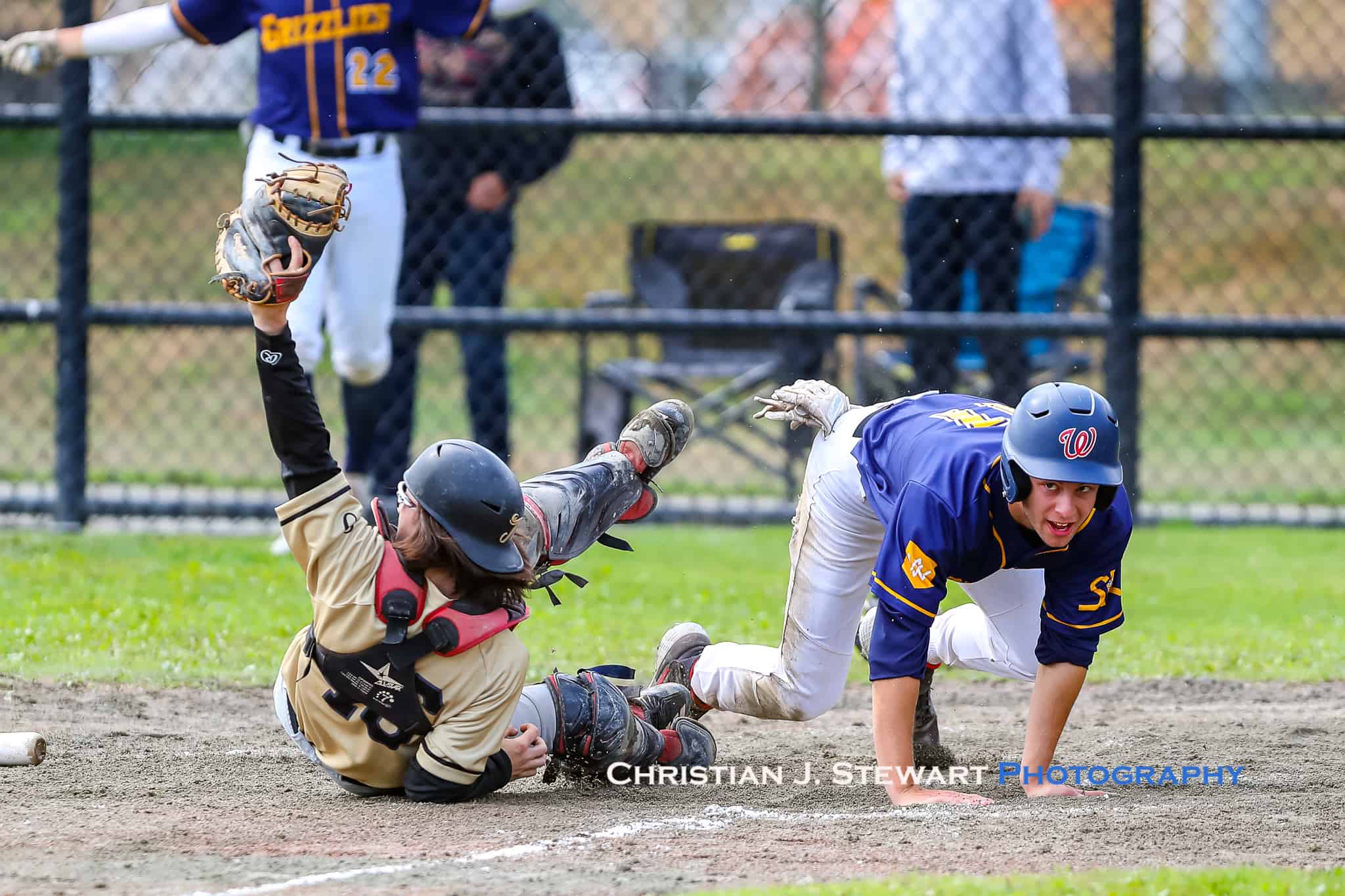 Despite the best efforts of Tide catcher Ryan Whelan (left), the Grizzlies Noah Newman would score one of their 10 runs Sunday on this play at the plate (Photo: Christian J. Stewart)

The Grizzlies would go on to meet the Victoria Eagles in the finals, with the Eagles prevailing 7-0 to take the Premier Division title.  The Eagles defeated Parksville in Sunday’s second semi-final 7-3.

Graeme Glynn got the start for the Tide and he was roughed up early, surrendering three runs to the Gizzlies in the very first inning, on three hits, two walks and an error. 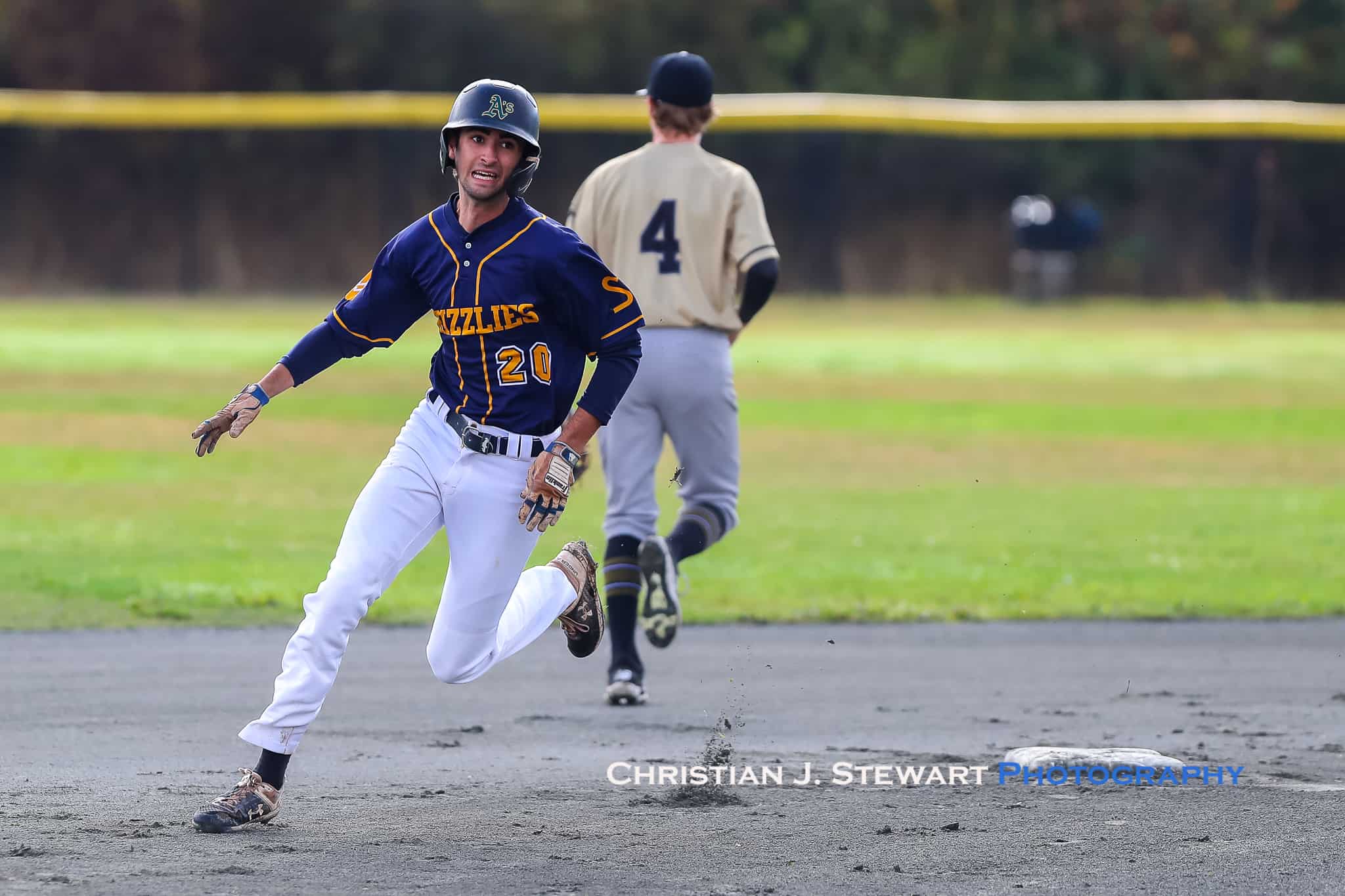 The Grizzly’s Ethan Merk rounds second en route to scoring one of his two runs against the Tide (Photo: Christian J. Stewart)

While the Tide would respond with a run in the bottom of the first, the Grizzlies would continue to stay hot offensively, scoring a run in the second and three more runs in each of the third and fourth innings to run their lead to 10-1.

The Tide would finally shake off the cobwebs in the fifth, taking advantage of three Grizzly walks and two errors to score four and cut the lead to 10-5.  They had a chance to score more, with one out and the bases loaded, but a pop out and strikeout ended the inning. 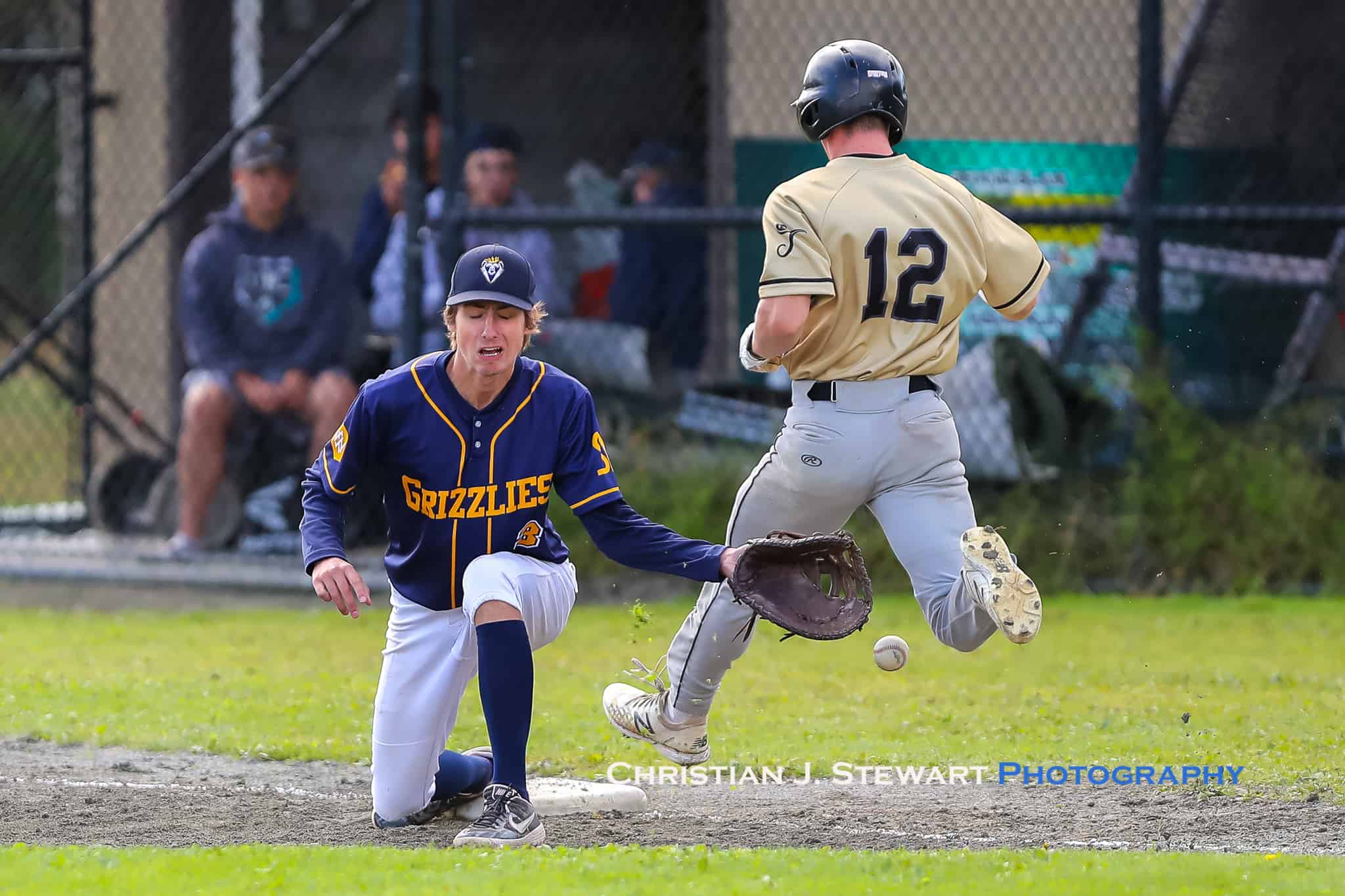 In the bottom of the sixth, the Tide struck again, with a big blow being a two-out, two-run double off the bat of Brendan Morrison. Morrison would then score when Austin Wall would reach on an error and the Tide had cut the lead to 10-9. 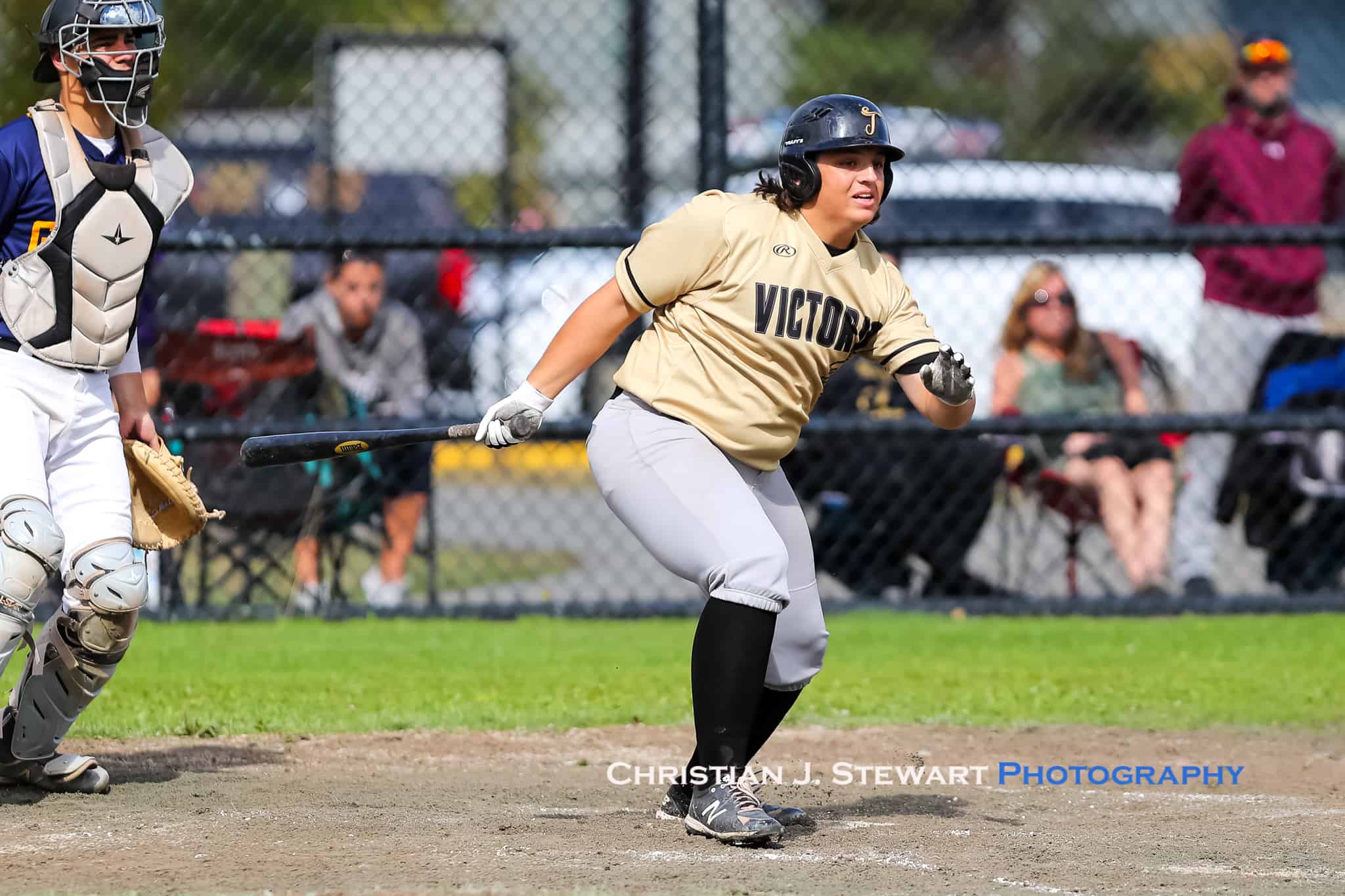 That would be it though, as a fly out to left field ended the game and eliminated the Tide from the tournament.

The Grizzlies were led offensively by Nathan Houston who had a double, two singles, an RBI and a run scored.  Brady Bye also added a two-RBI double and scored, while Noah Newman had two hits, a walk and scored twice. 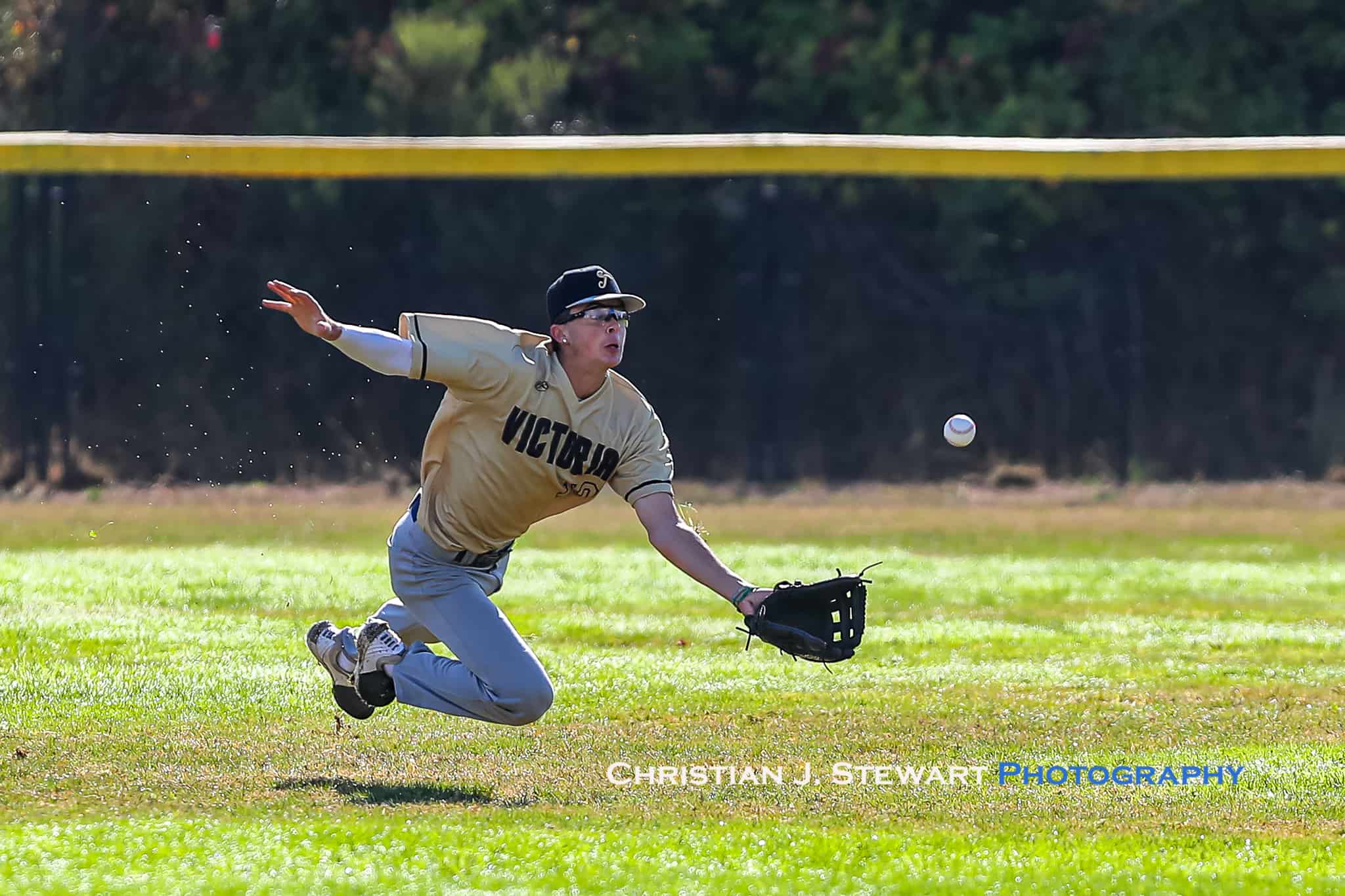 The Golden Tide’s Tristian Bolger would make a great catch of this sinking line drive against the Grizzlies on Sunday morning (Photo: Christian J. Stewart)

On the mound, Joe Stawarz got the start for the Grizzlies and he limited the Tide to just one run on one hit in his four innings of work.  Cooper Ostlund and Adam Newton saw work in relief. 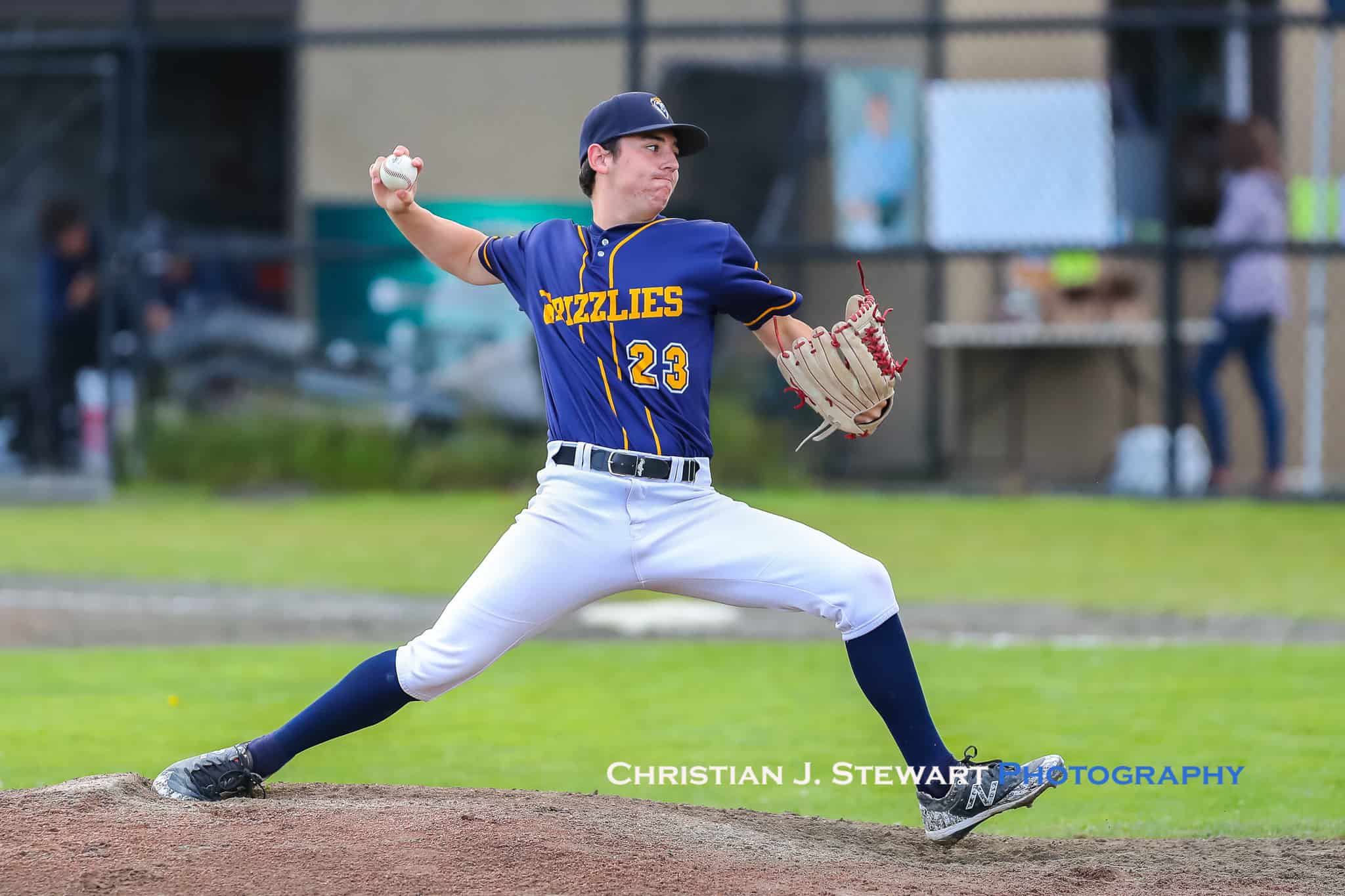 The Grizzlies Joe Stawarz would hold the Tide to one run and one hit through four innings of work (Photo: Christian J. Stewart)

For the Tide, in addition to Morrisons two-RBI double, Chase Thomson had a hit, walk and run scored and Ryan Whelan singled, reached on error, had an RBI and a run scored.  Tyler Burton and Ben Natingor would also score twice in the losing effort.

On the hill, Jayden Puri, Jackson Leatherman and Brett Patterson all saw work in relief, with Patterson tossing two scoreless innings over the final two frames. 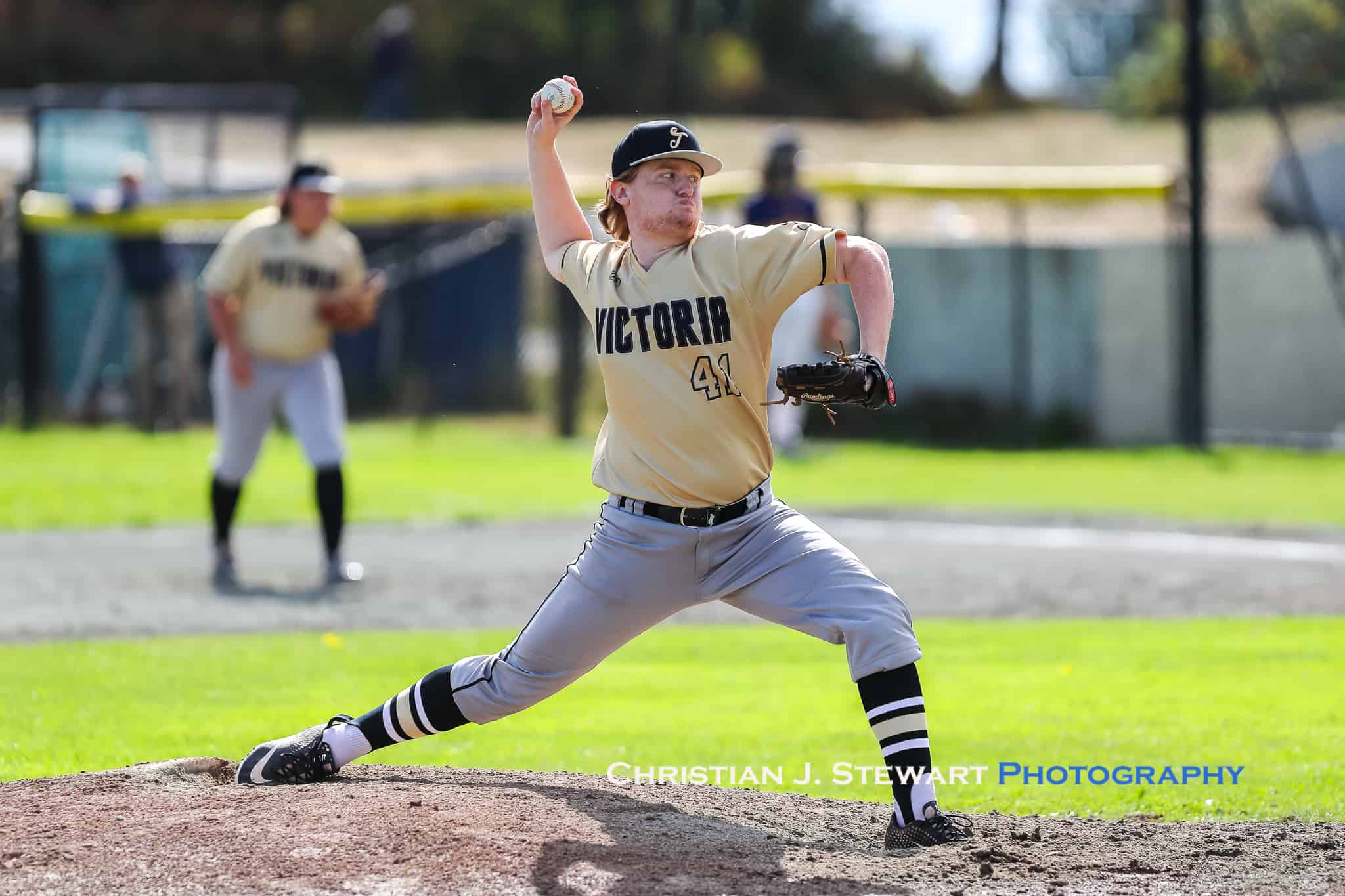 In split-squad action on Sunday, the Golden Tide were also on the road to Nanaimo where they played a pair of games with Vancouver Island University.  Details were not available at the time of writing this, but it sounds like it was a split with a Tide win in game one and a Mariner win in game two.

The Eagles Nick Lee would be safe on this play as Grizzly second baseman Thomas Stawarz could not hang on to the ball (Photo: Christian J. Stewart)

Next action for the Tide is the fall home opener on Friday September 17th at 6:00 pm against Thompson Rivers University.  Tickets are just 5.00 or 10.00 for Grandstand (covered) seating Available at the gates or in advance at the HarbourCats office at 101-1814 Vancouver Street, 778-265-0327.