Above: Team Black’s Zeke Holt celebrates scoring one of six runs in the second inning against Team Gold Wednesday.

October 28, 2021, Victoria, BC – Team Black jumped out to an early 6-0 lead but then had to hang on for an exciting 14-13 win over Team Gold in Game 1 of the Victoria Golden Tide Inter-squad Wold Series on Wednesday afternoon at Wilson’s Group Stadium in Victoria. 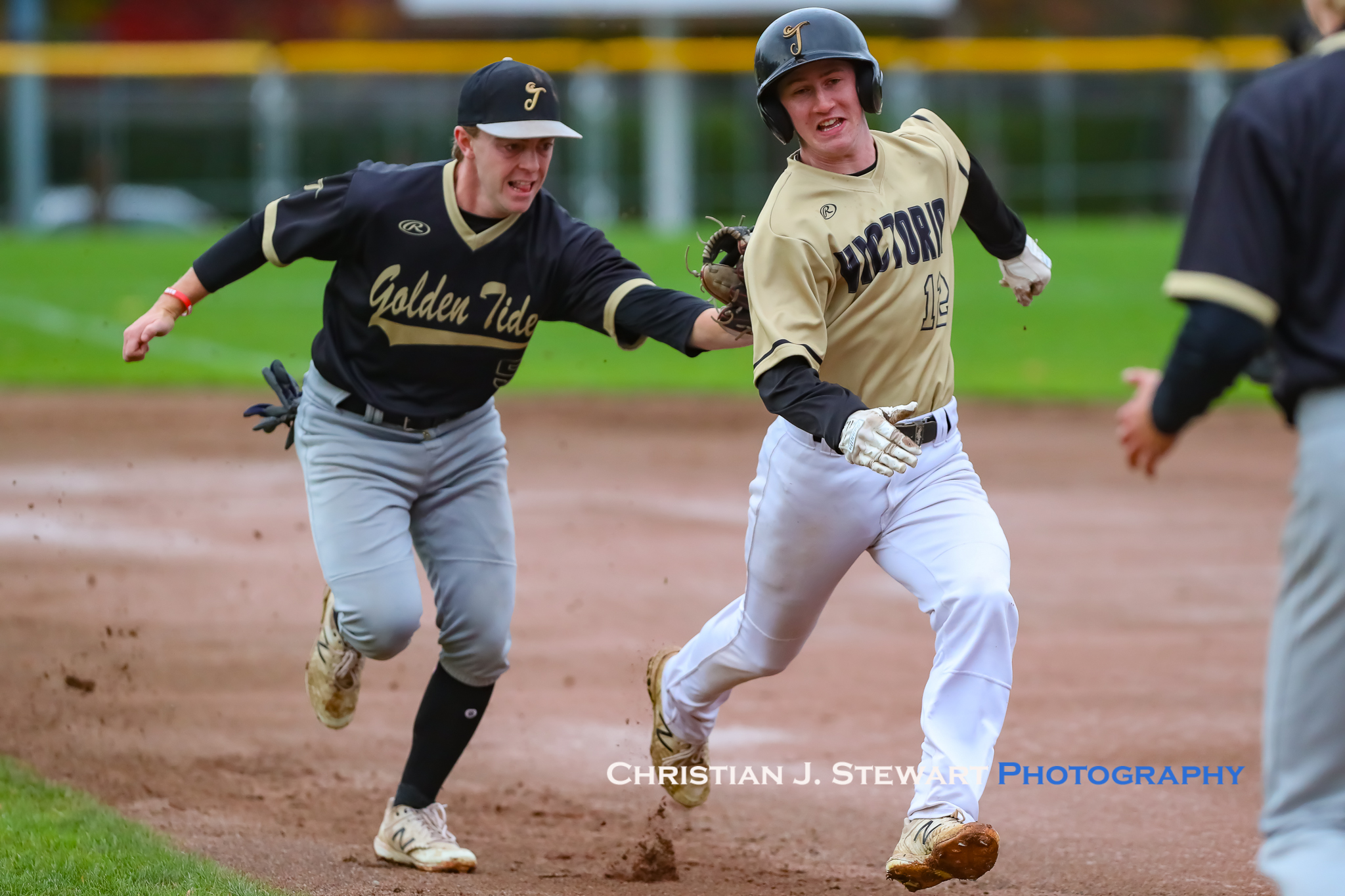 The World Series, the first for the inaugural year of Golden Tide baseball, pits Team Gold (coached by Ethan Fox) against Team Black (coached by Kyle Orr) in a best of three series. The winning team not only gets bragging rights, but will be awarded with a night in the Wilson’s Transportation Group suite at a Victoria Royals game. 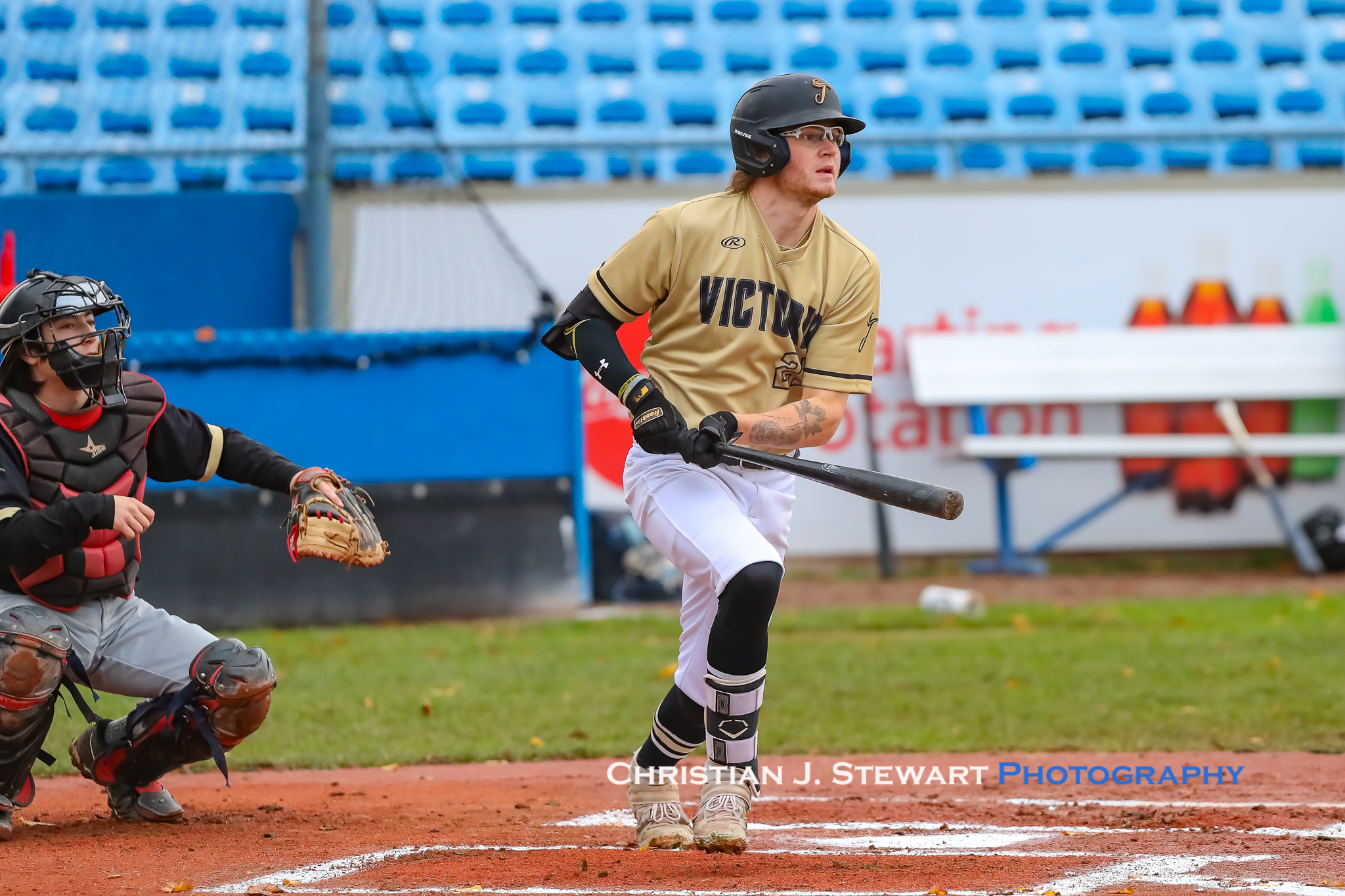 Team Gold’s Brody Alexandre had two hits, a walk and two runs scored in the loss to Team Black Wednesday.

The Series is being played under some unique rules, designed to speed up game play and keep the games exciting, as due to other events scheduled in the evenings at the stadium, games have to be completed by 6:30pm.

As such, pitchers are required to pitch within 10 seconds and teams have to hustle on and off the field between innings. Any delays or infractions will warrant a warning from Head Coach Curtis Pelletier and if a team is notified a second time, a run is granted to their opponents. 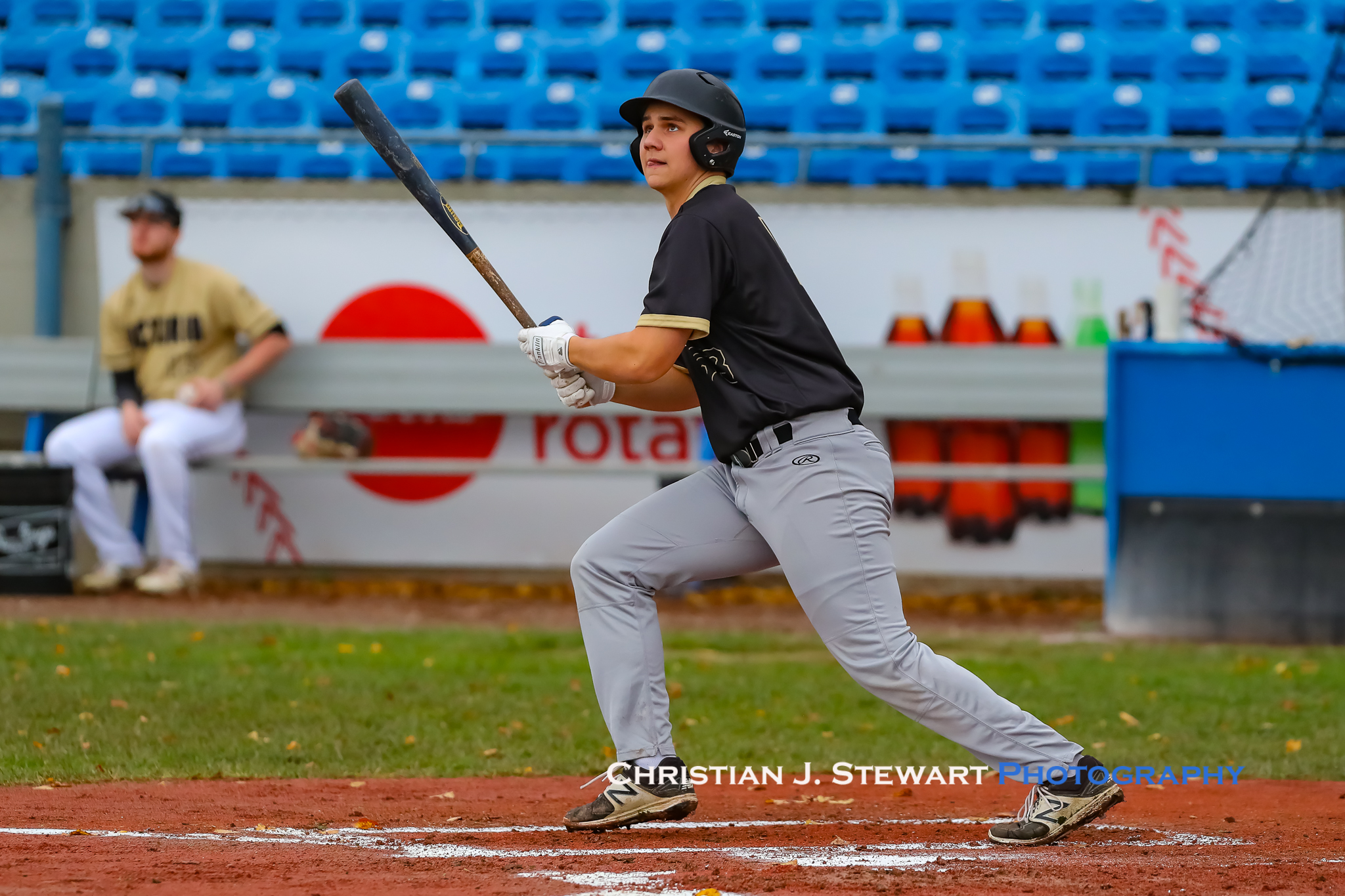 Batters are also not allowed to call time outs, or a strike will be called, catchers have pinch runners at all times and in all the even numbered innings, teams begin the inning with a runner on second base.

While there were a few warnings in Wednesday’s game, there were no penalty runs awarded under the rules, however the runner at second in the even innings had a dramatic impact on the game, with seven of those eight runners ultimately scoring. 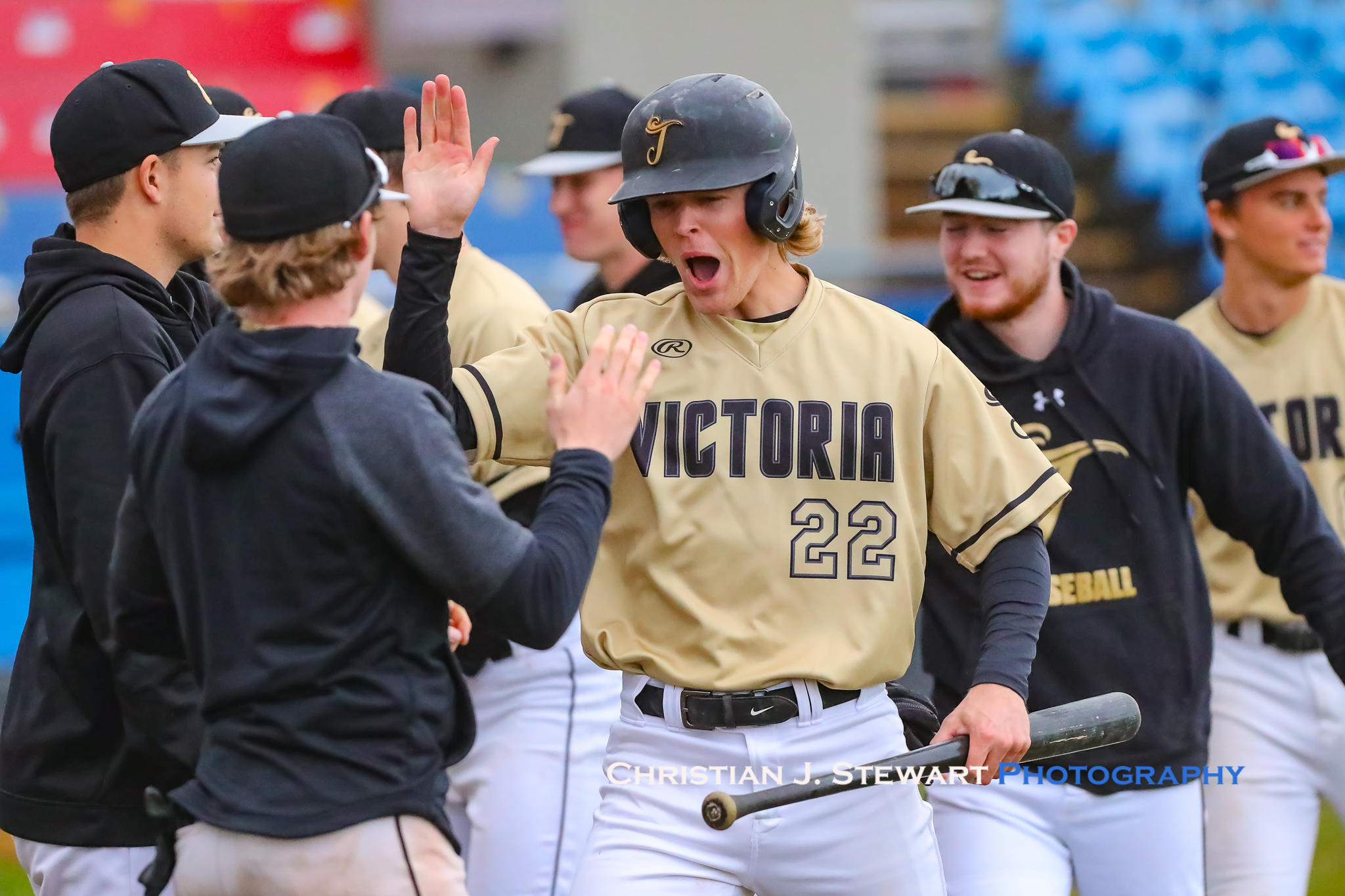 This aspect came into effect immediately Wednesday, as Team Black would jump on Gold starter Brady Wilson for six runs in the top of the second inning, thanks to five five consecutive base hits, one of which, by high schooler Ryan Deagle, scored Alex Mclauchlan, the special runner, with the first run of the game. 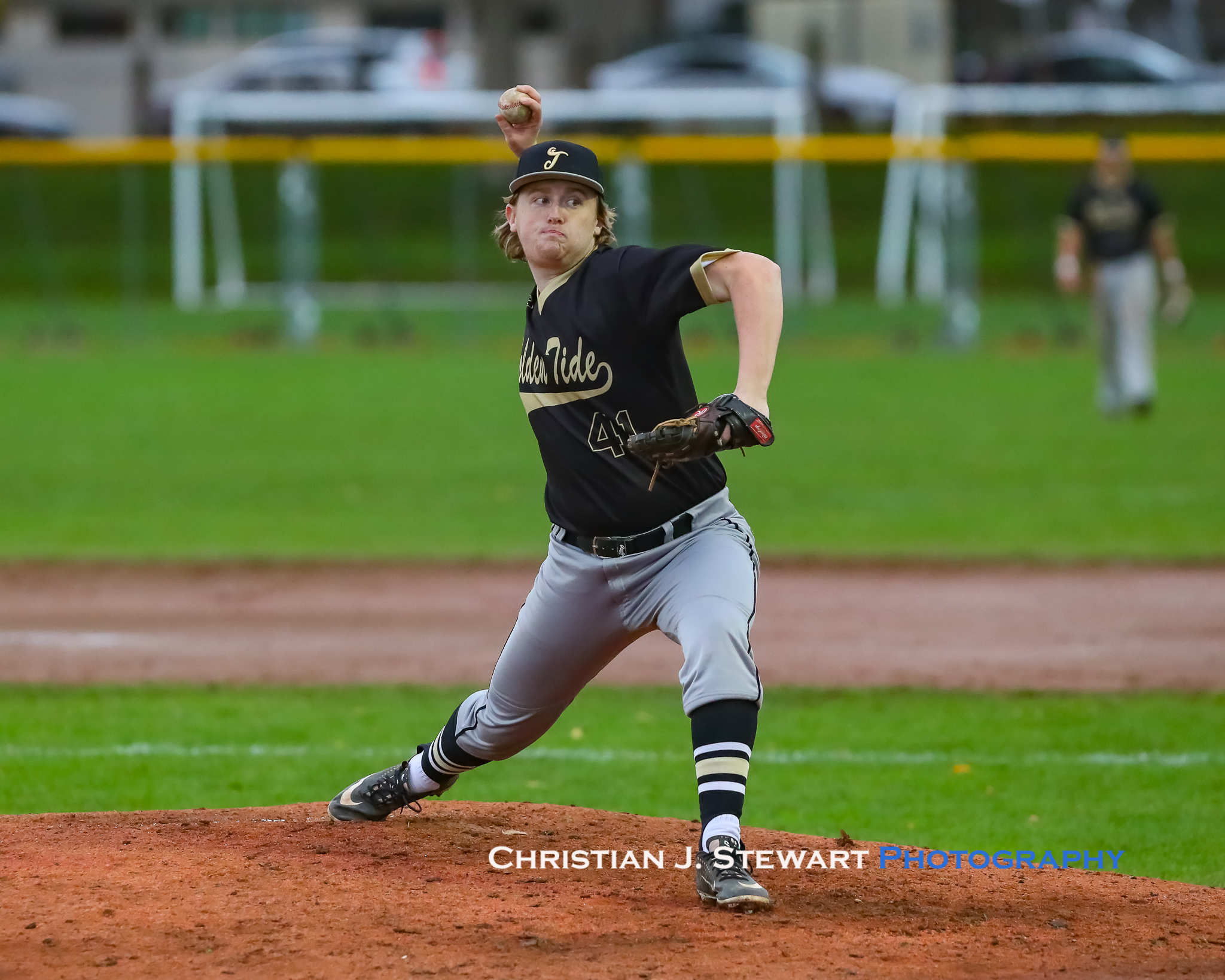 Team Black’s Brett Paterson would be credited with the win in relief on Wednesday.

Team Gold would get one of those runs back in the second, when special runner Brody Alexandre scored despite a 1-2-3 inning and then they would jump into a brief 7-6 lead in the third, when they finally got to Black starter Ethan Dean for six runs on the strength of six hits.

A three-run fourth inning, keyed by an RBI single from Jaxson Cordle, would put Team Black back in front 9-6 and they would extend that lead to 14-9 heading to the bottom of the eighth (the agreed upon final inning due to curfew). 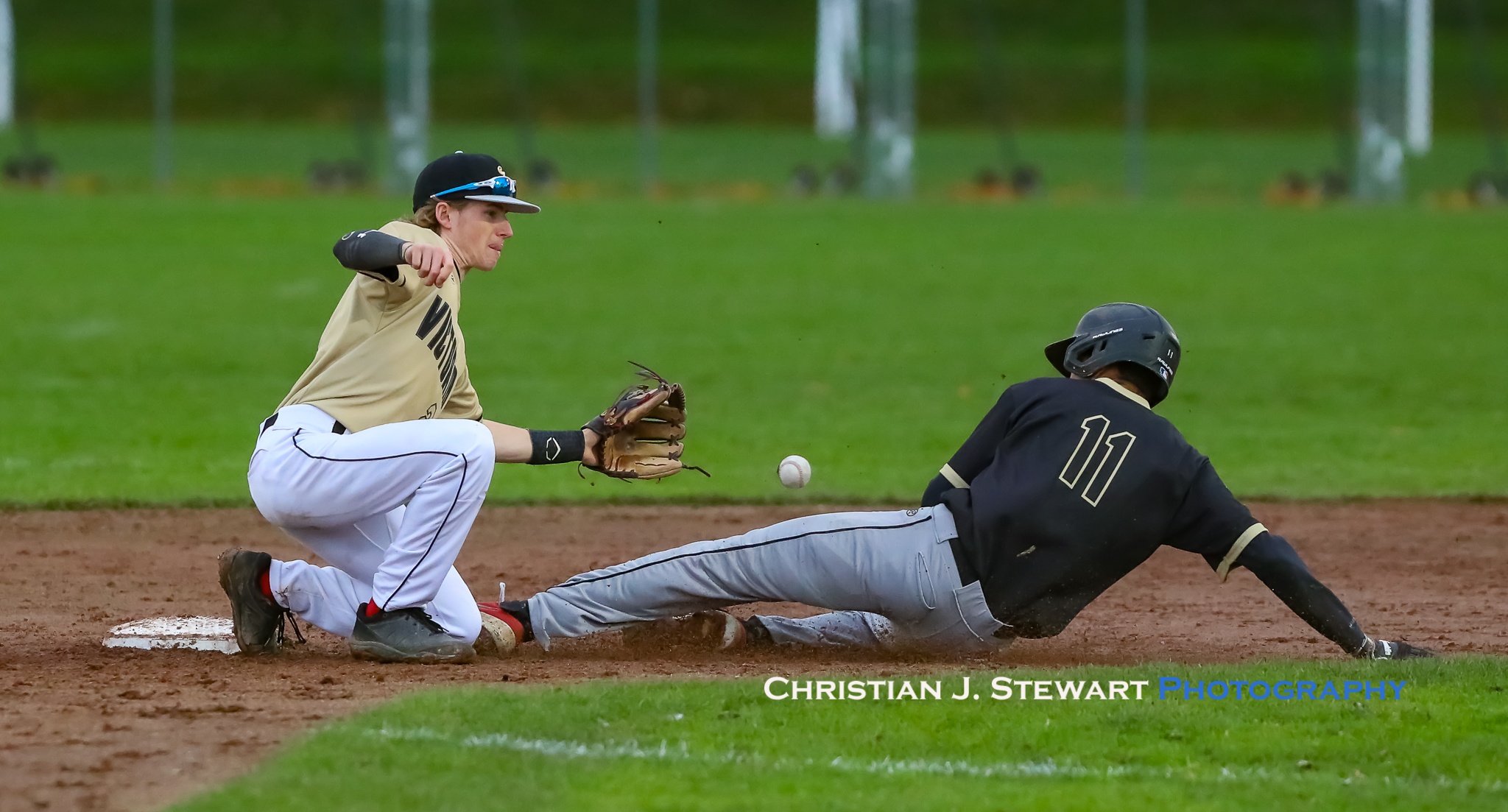 Team Black’s Jaxson Cordle slides safely into second base ahead of the throw to Team Gold second baseman Myles Wall.

Team Gold would not go down without a fight however and after a pair of walks and singles from Parker Harris, Daniel Sawchyn and Alexandre, they had closed the gap to 14-13 with the tying run sitting on second base. Reliever Haldon Craig would not be fazed however and struck out Jordan Bond to end the game and preserve the crucial game one win. 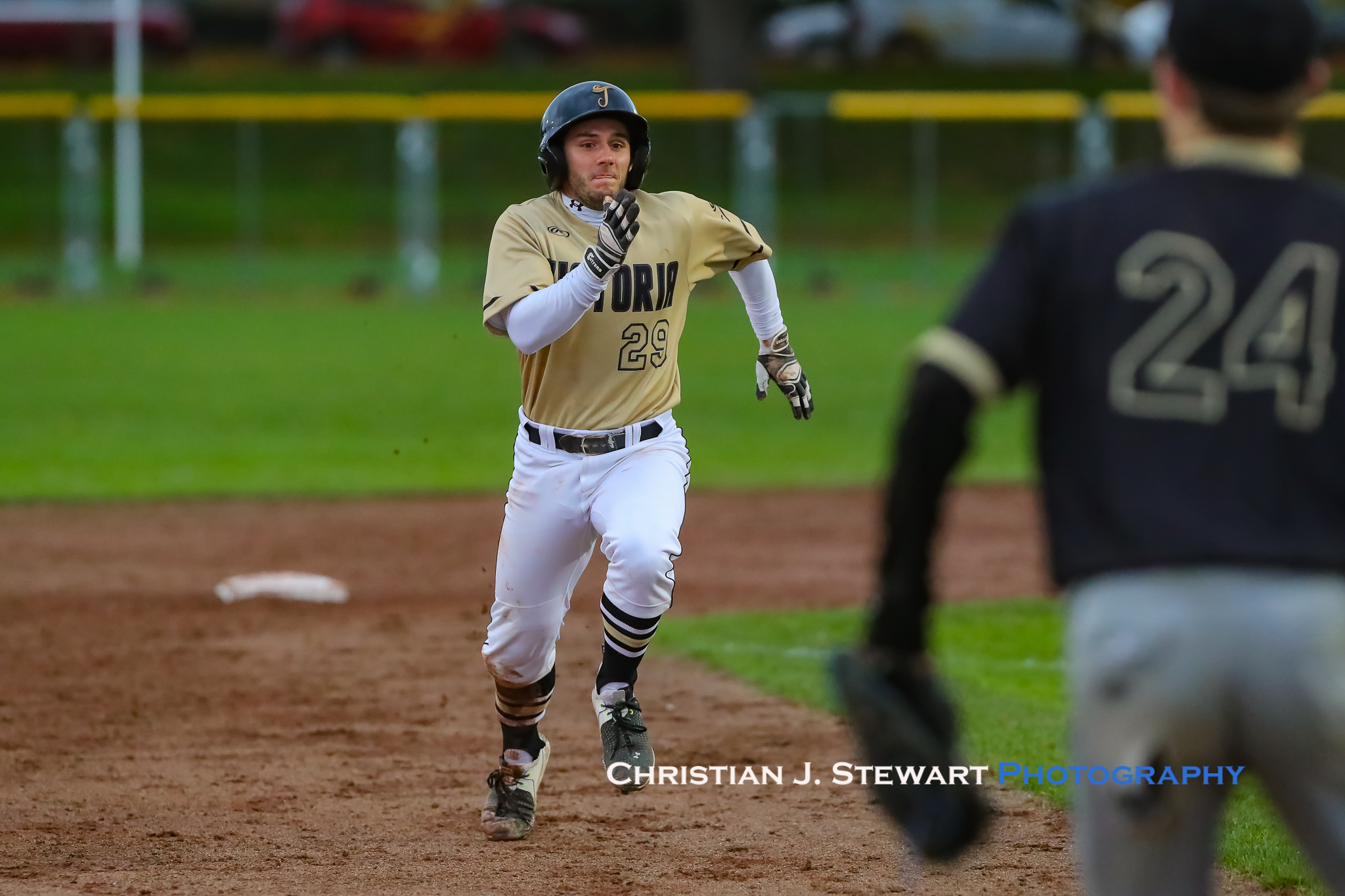 Team Gold’s Will Podmoroff hustles to third base during action Wednesday against Team Black.

For Team Black at the plate, Parksville Royal product Deagle had a great night, slashing two singles, a double, two RBI and scoring twice. Zeke Holt also had a three hit night with two runs scored, while Cordle, Ryan Whelan and Witt Nevins all had RBI base hits.

On the hill, Dean was picked up with some solid middle-inning relief by Brett Paterson, who gets credit for the win, going three innings and surrendering two runs on one hit and two walks. Nate Major pitched the seventh and part of the eighth innings and Craig would get the save. 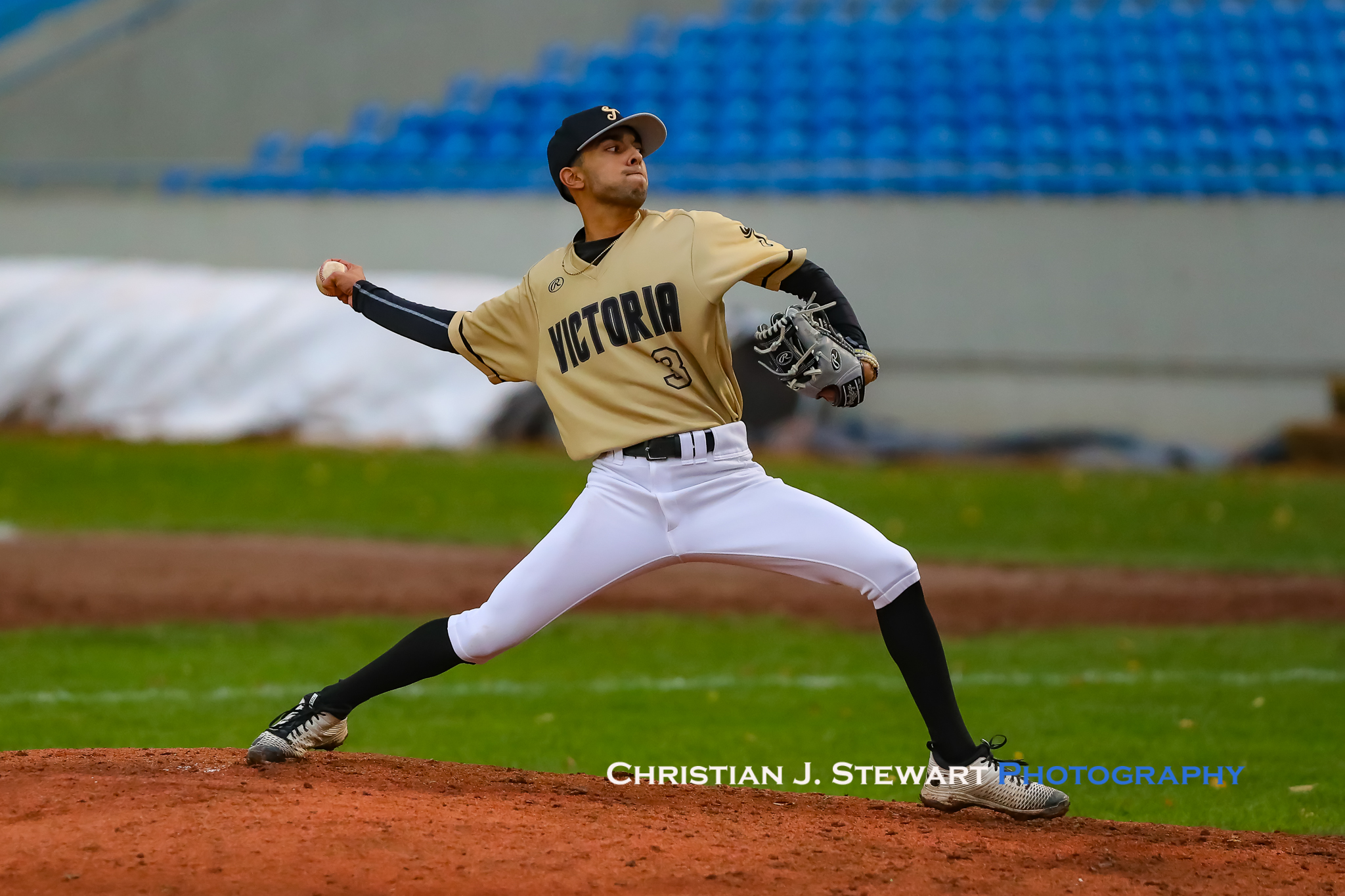 For Team Gold, Sawchyn would lead the offence with three hits, two RBI and a run scored, while Alexandre would chip in with two hits a walk and two runs scored. Tyler Burton was his usual instigator in the leadoff spot, with a single, walking three times and scoring twice, while Victoria Eagle product Ryder Green would single, walk and score three times in the losing effort. 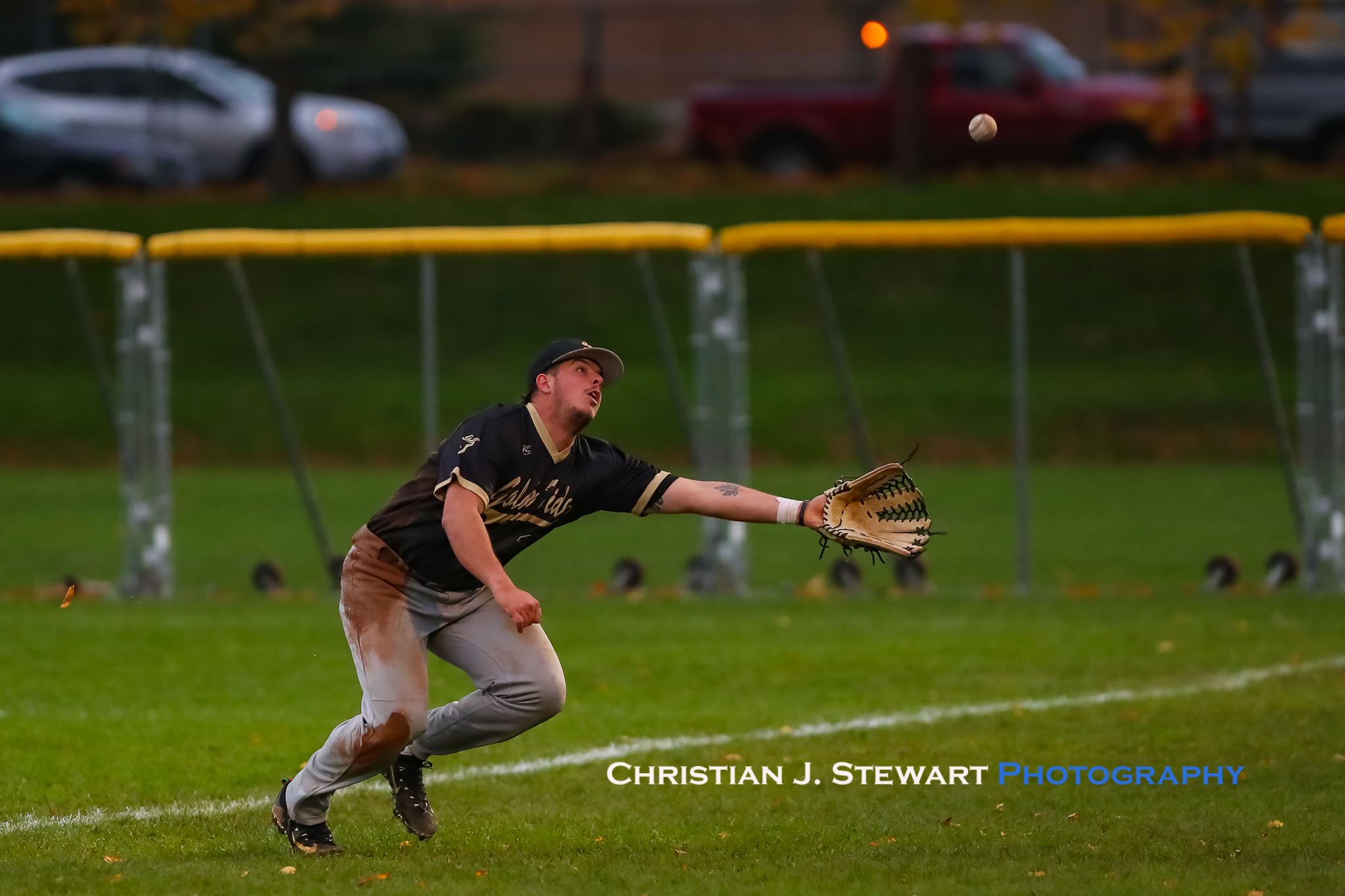 On the mound, Wilson would pitch through the fourth, taking the loss. Jayden Puri would take over in relief, finishing the game and giving up five runs on five hits and three walks in his four innings of work.

Game two in the series was scheduled for 4:00 pm on Thursday afternoon, but has now been cancelled because of extreme rain and weather. It will now be played Friday at 4:00 pm. Game three then (if needed), would likely then be held Sunday afternoon, with a time to be determined. 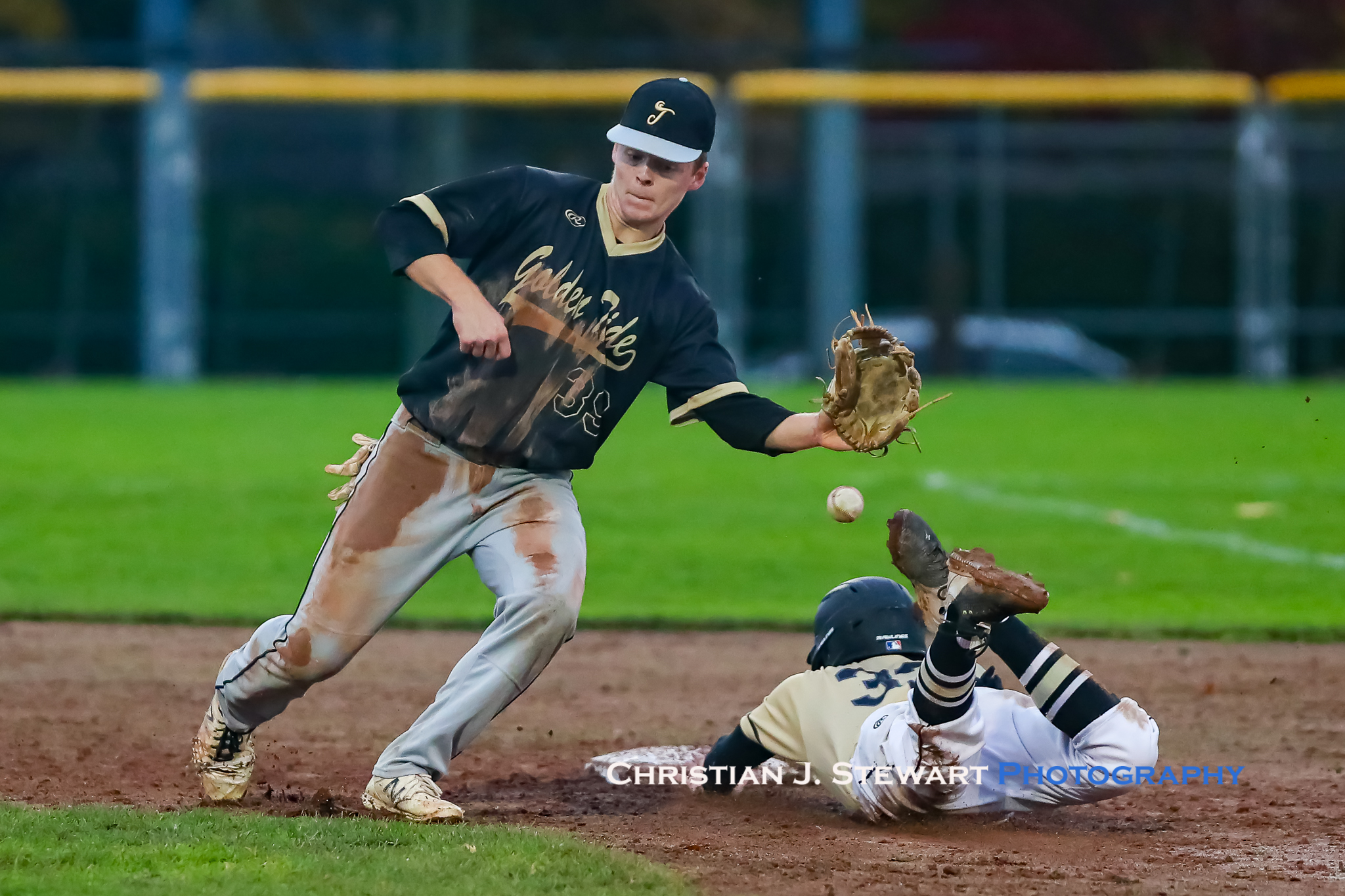 The Golden Tide will also be in action on Saturday for their last formal game of the fall season, when they take on the Ontario Giants at 3:00 pm at Wilson’s Group Stadium in a single nine-inning game. Tickets are available at the gate. That game will be preceded by a game at 12 noon between the HarbourCats Players Development Club and the Giants U16 club. That game is included with the ticket for the Tide game at 3:00pm. 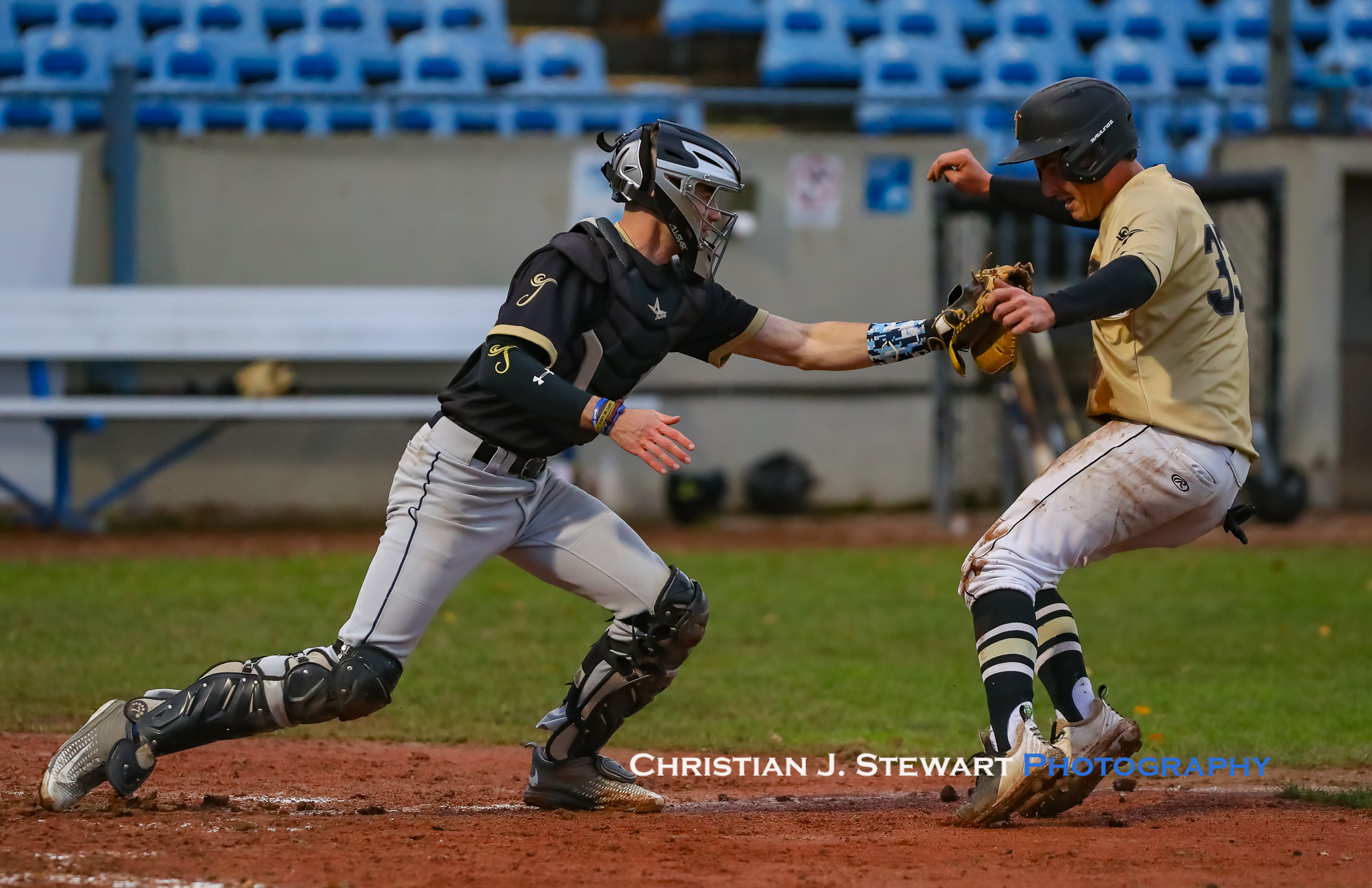 Team Black catcher Andrew Baxter puts the tag on Team Gold’s Jordan Bond on this play at the plate Wednesday.