Coquitlam Angels pitcher Shawn Schaeffer delivers a pitch against Red Deer on Thursday. The Angels (Team BC) would open the tournament with a 7-2 win over Alberta (Photo: Christian J. Stewart)

August 23, 2018, Victoria, BC – Team New Brunswick capped off a busy day of baseball on the opening day of the 2018 Senior Men’s Nationals by exploding for 20 hits and six home runs in a 15-1 victory over the host Victoria Mavericks Thursday evening at Wilson’s Group Stadium at Royal Athletic Park. 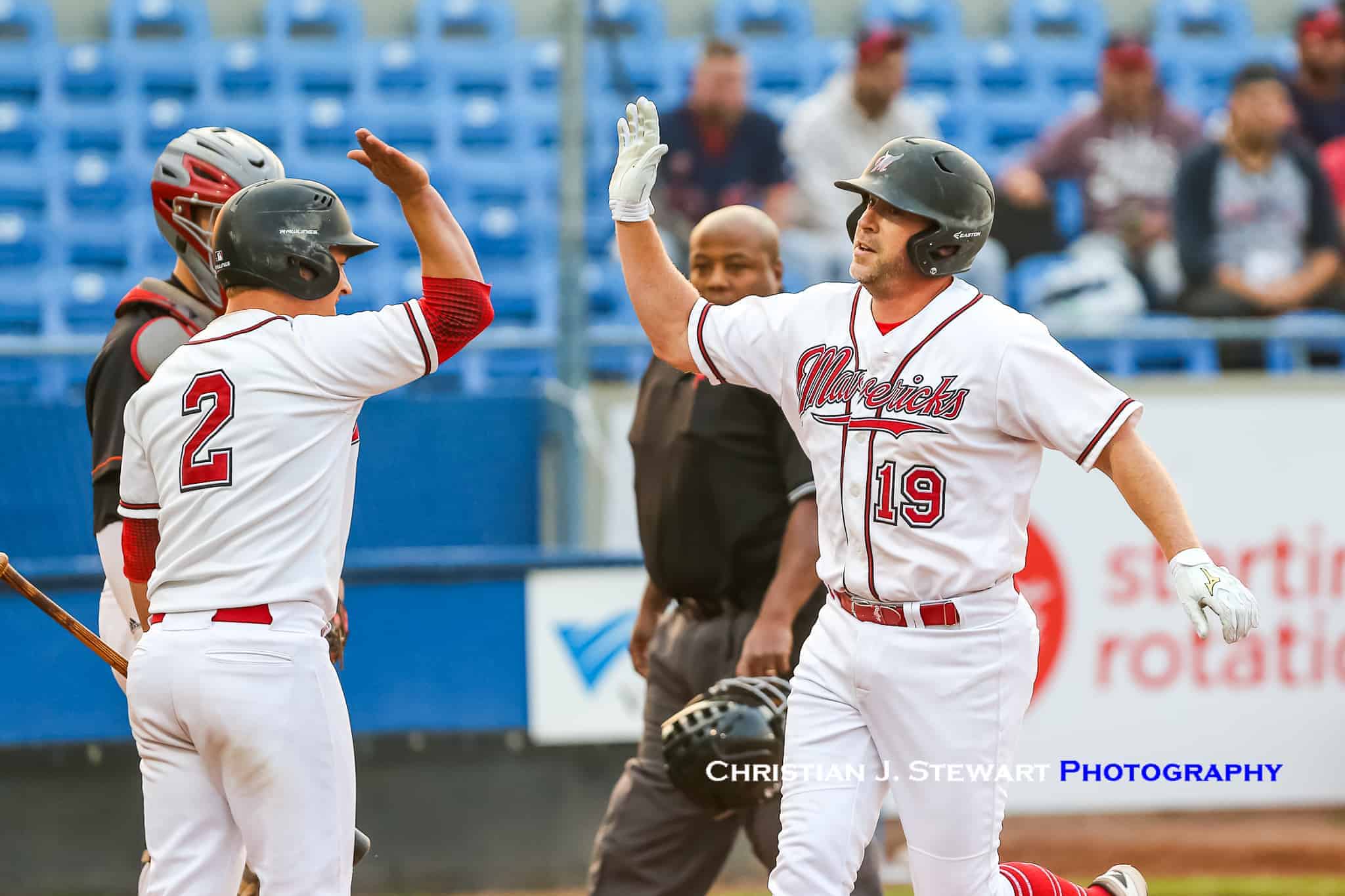 On a day which featured seven total games spread across Wilson’s Group Stadium and Lambrick Park across town in Saanich, team Quebec distanced themselves from the pack early on with a couple of victories over Newfoundland and New Brunswick to stand alone atop the standings at 2-0. 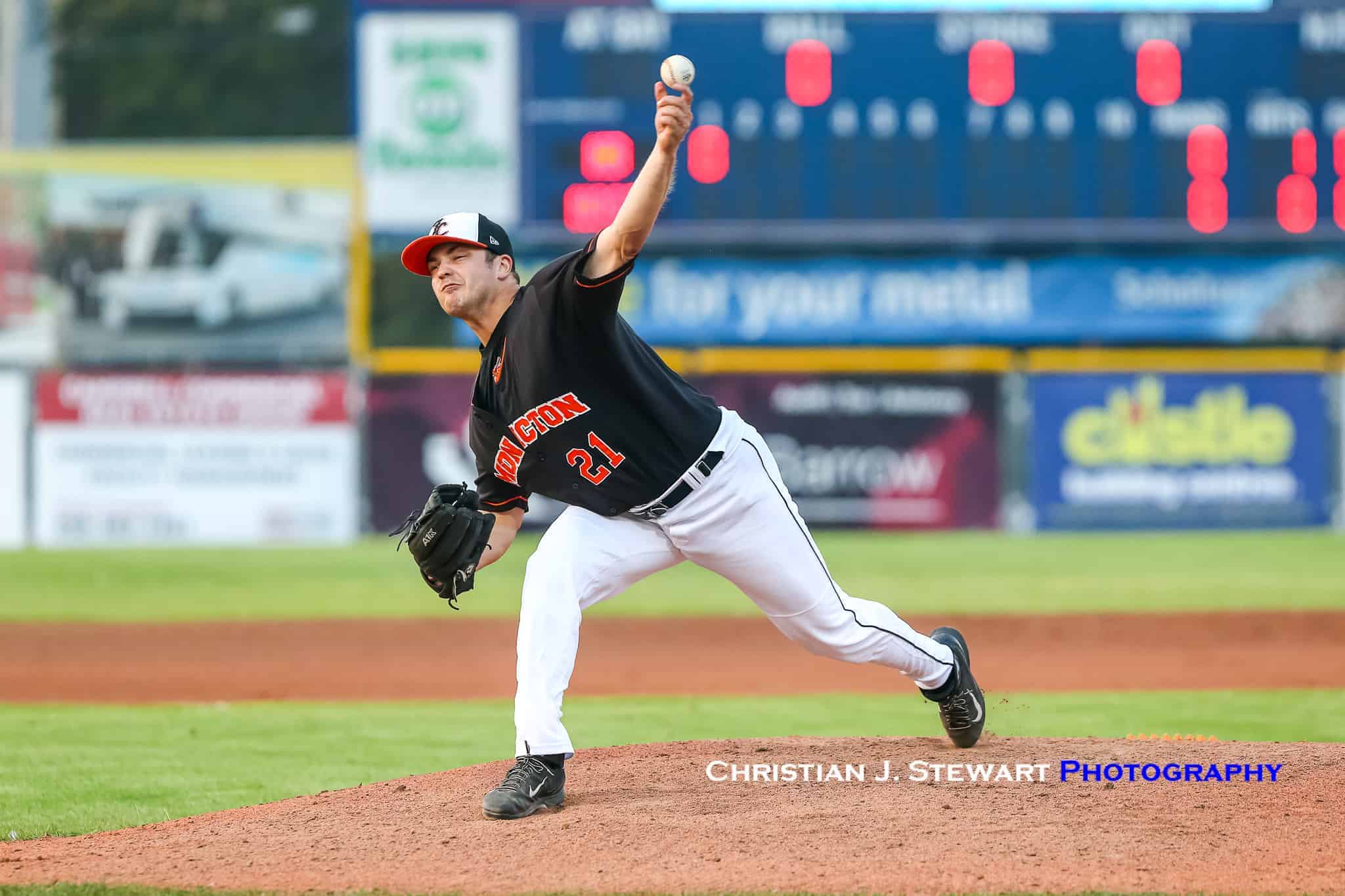 New Brunswick’s Shane Kraemer had an effective start for the FisherCats, shutting down the Mavericks for four innings after giving up a first inning home run (Photo: Christian J. Stewart)

In In the marquee event of the night, the Mavericks took the field behind the right arm of 2014 Victoria HarbourCats Player of the Year Alex Rogers, but struggled to keep the ball in the yard against a scrappy Maritimes team. 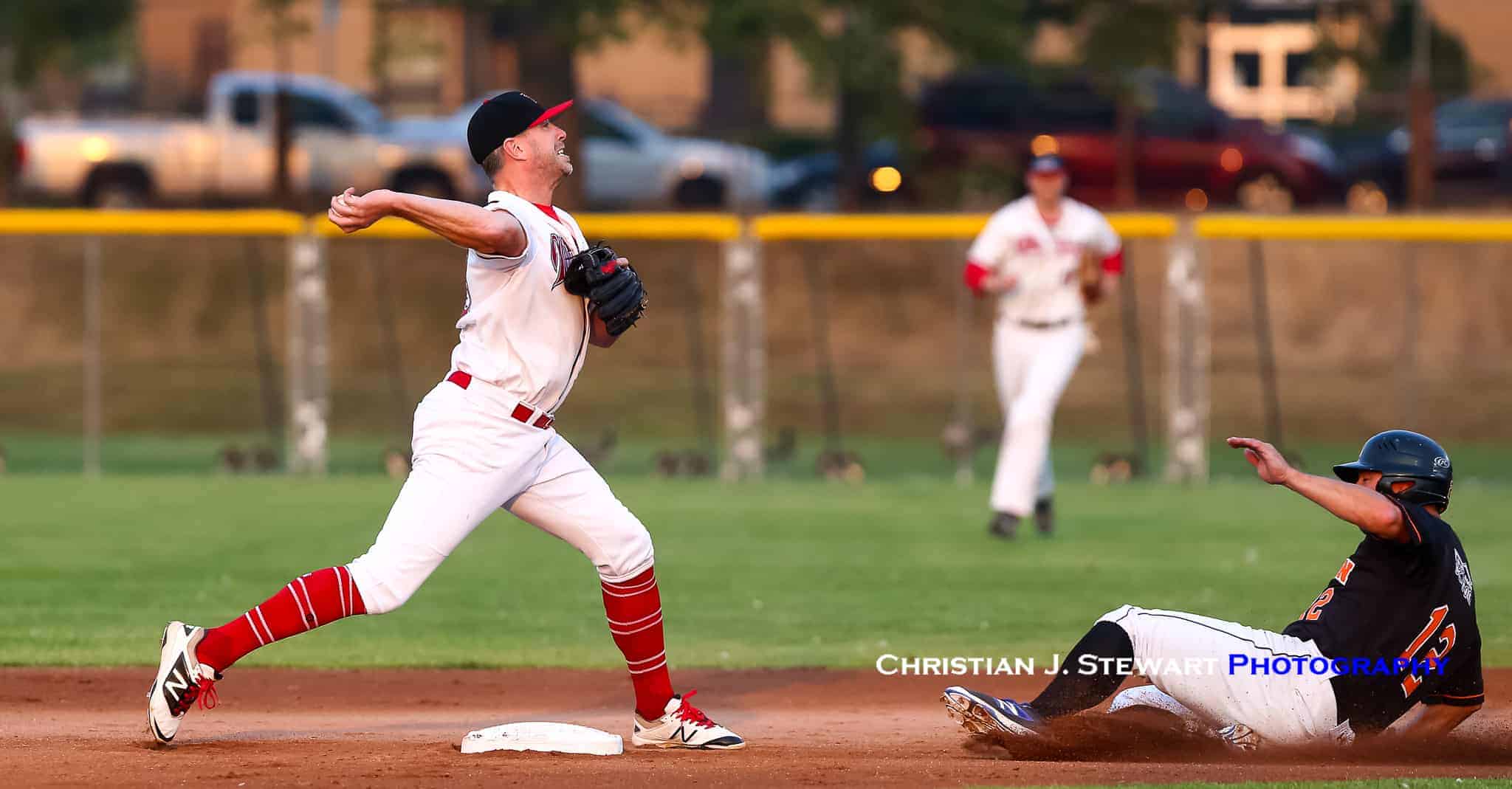 However, the Mavericks were the ones to draw first blood in the home half of the first, as Lanny Burrows opened the scoring with a solo shot over the left field fence to make it a 1-0 game.

After Rogers escaped the first with an inning ending double play, the North Dakota State alum would be taken deep by the hot bat of Serge Vautour. Fresh off winning the 2018 Home Run derby last night, and racking up three hits earlier in the day against Manitoba, Vautor hit a no-doubter to left field evening the score at one apiece. 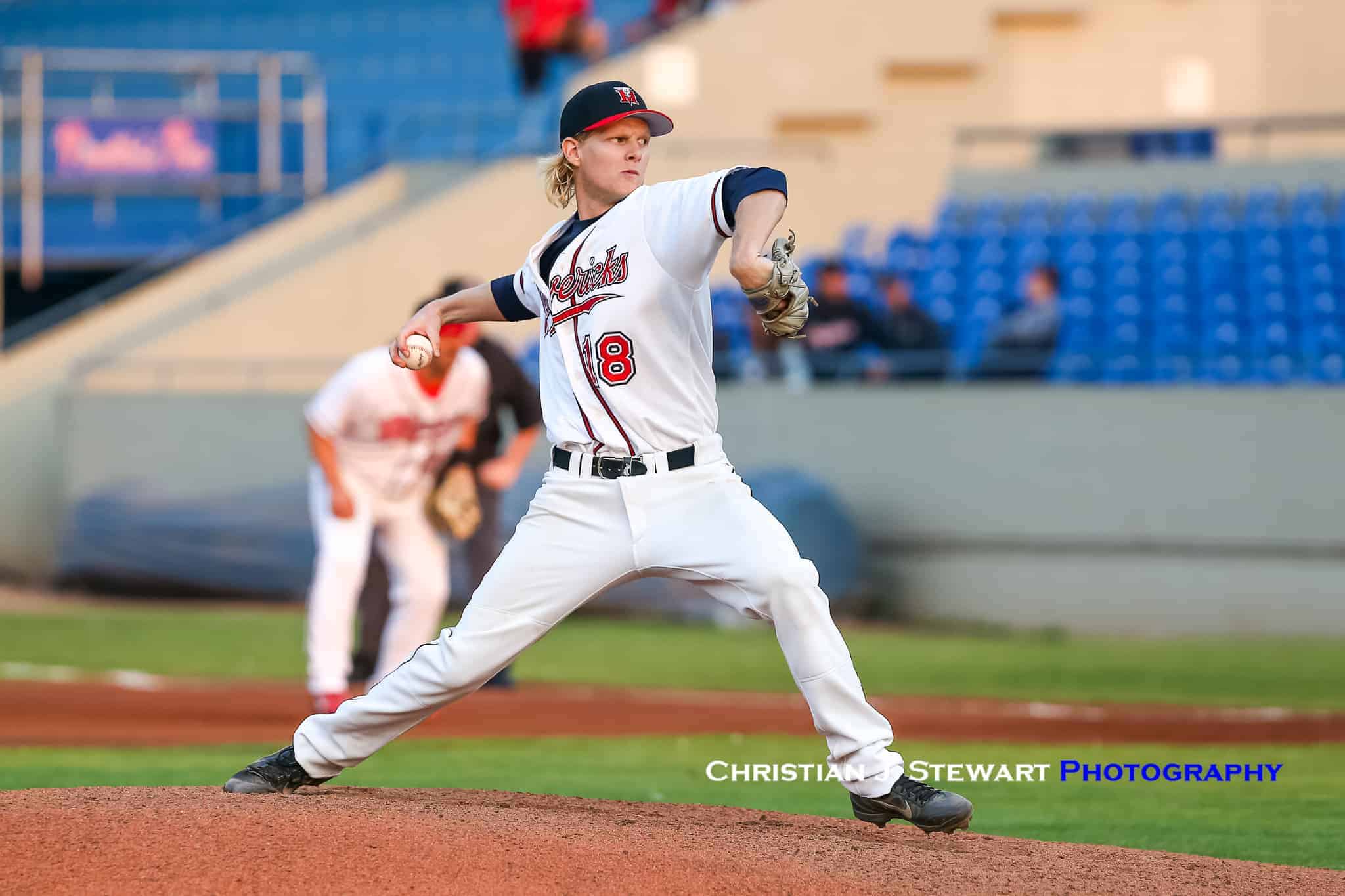 Former Victoria HarbourCat Alex Rogers got the start against New Brunswick Thursday, but was roughed up for five runs on nine hits in just 2.1 innings of work (Photo: Christian J. Stewart)

Rogers would then yield a couple of singles before Josh Dennis’ RBI single gave New Brunswick a one run advantage. The righty would escape the jam with the help of his defence in the field, as Duncan Blades and Burrows would combine to produce the second straight inning ending double play. 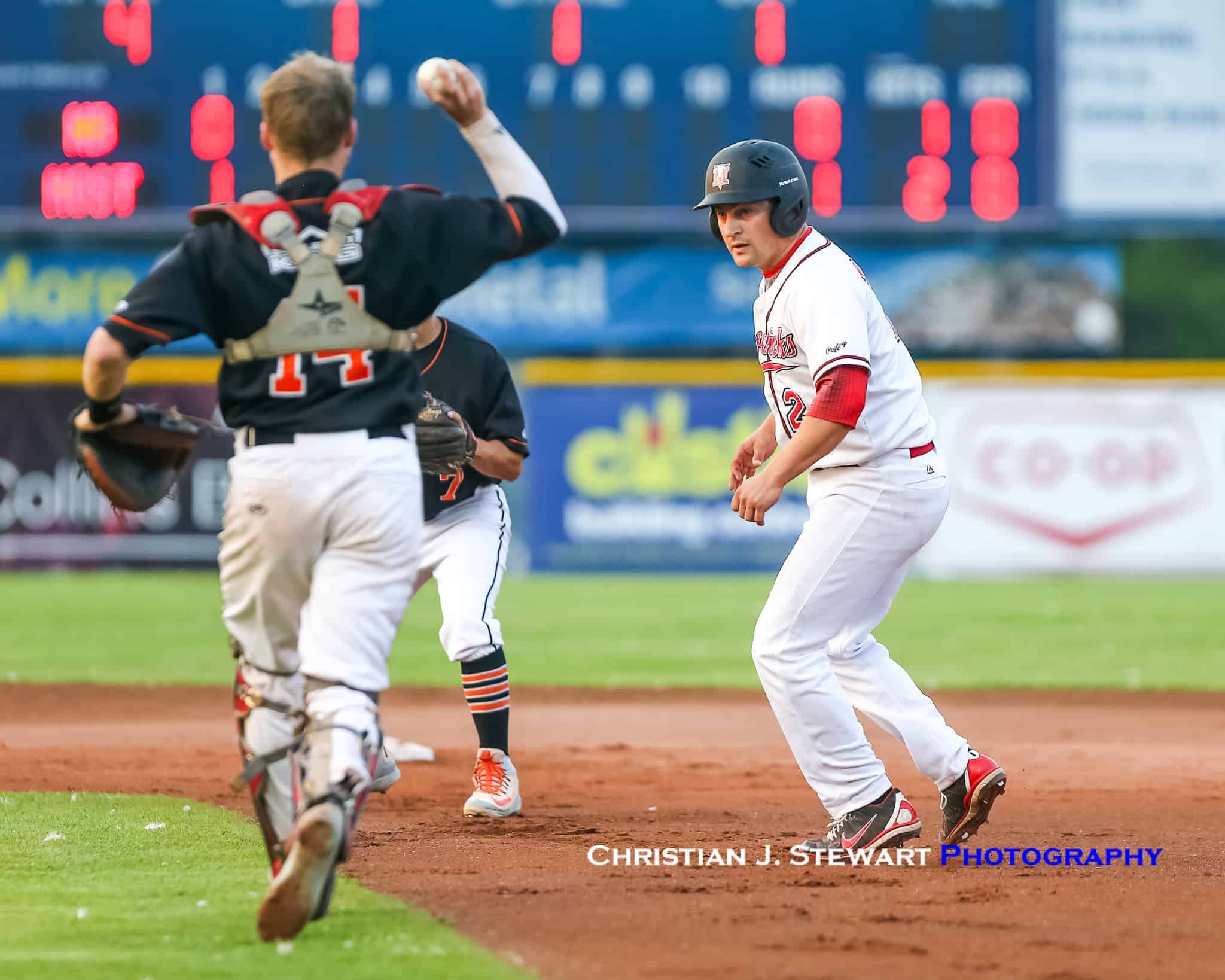 Victoria’s Duncan Blades was tagged out in this run down after leading too far off first (Photo: Christian J. Stewart)

Returning for the third, Jeff Watkin would launch a two-run homer to increase New Brunswick’s lead to three, while Vautour followed his teammate up with his second homer of the night to chase Rogers and make it a 5-1 game.

Meanwhile, Shane Kraemer was cruising on the bump for New Brunswick, scattering five hits and allowing only a single run in four strong innings pitched. 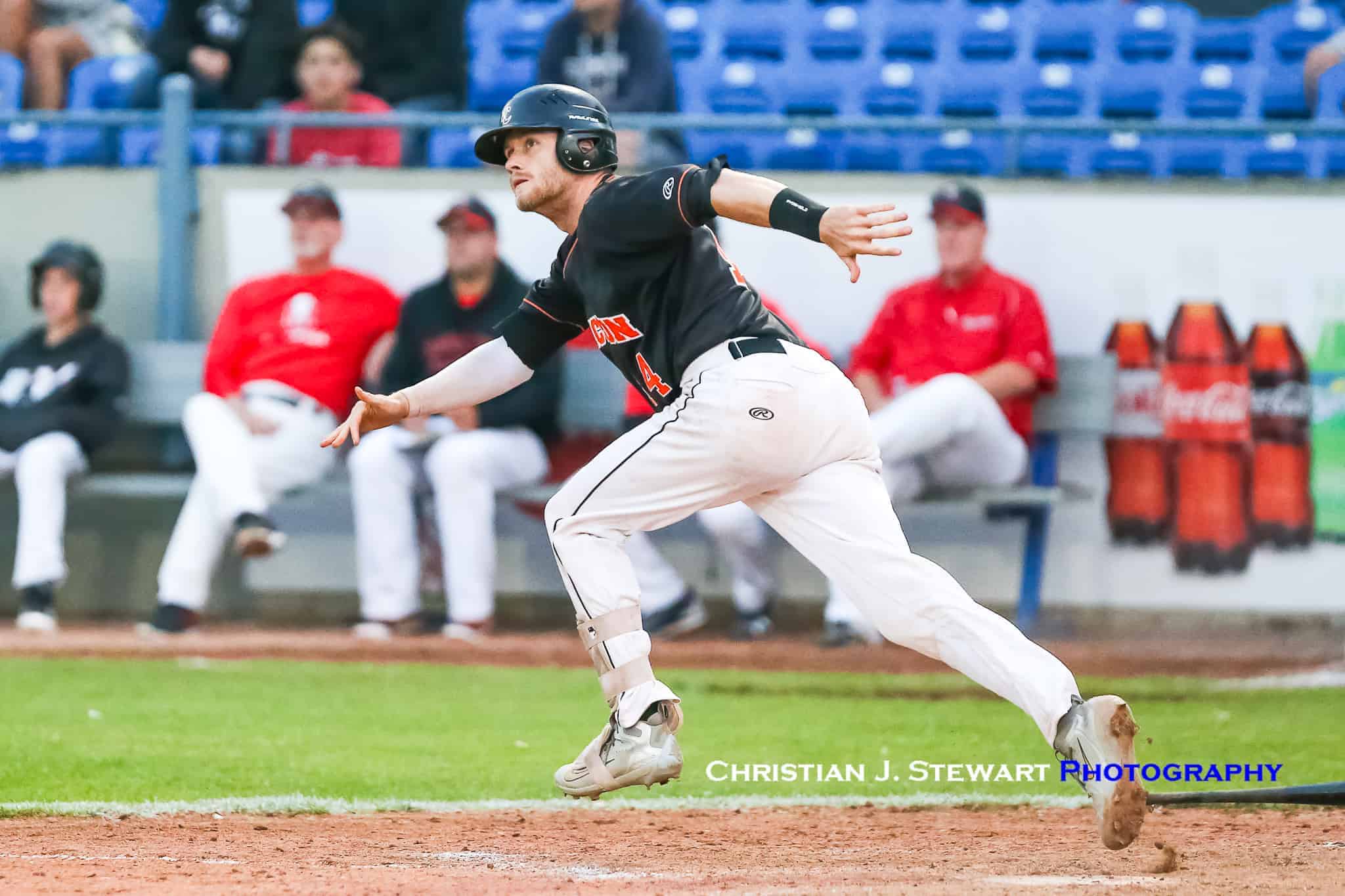 The New Brunswick power bats came up to the plate again in the top half of the fifth, as Dave Barr crushed a pitch from Mitch Davidoff pitching in relief over the fence to make it a 9-1 game, while Watkin smacked his second homer of the game right to up their lead to nine.

In the top half of the sixth, Tyler Walchuck’s bases clearing two-run double made it a 12-1 game, and brought the 10 run ‘mercy’ rule in effect. Since New Brunswick held a 10 run or more lead past five innings, the game was called early after Victoria couldn’t climb to within 10 runs of the lead in the home half the fifth. 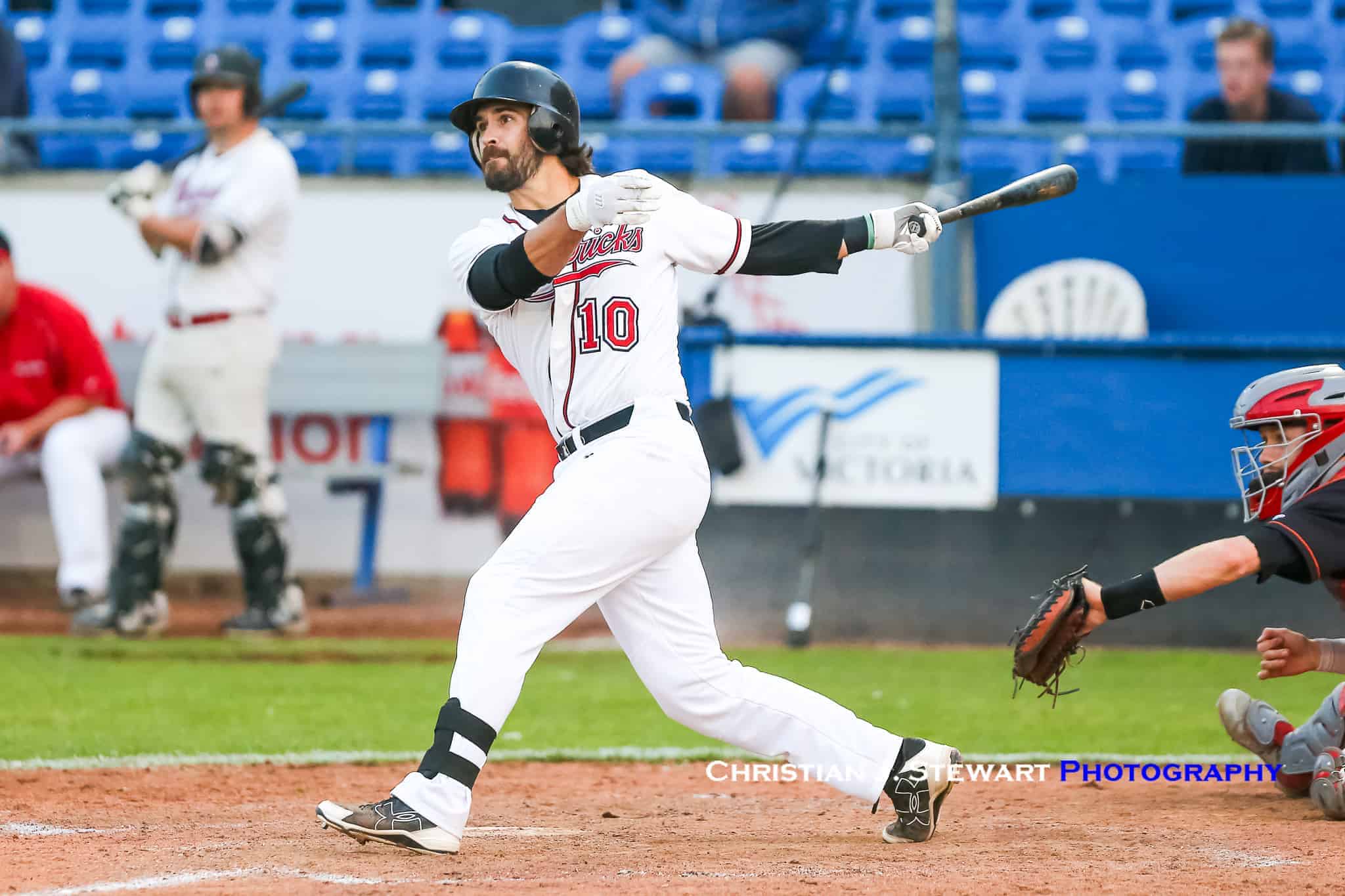 The Mavericks will look to avenge their opening loss at 12:00pm tomorrow against Ontario 1 (Tecumseh), while the rest of the action for day two will kick off at 9:00am with team BC taking on Quebec at Wilson’s Group Stadium.

Thursday’s game against Manitoba was a heartbreaker for New Brunswick, as they lost the lead late in an 8-6 defeat. The game was tied at five with Manitoba batting in the top of the eighth when Riley Shamray doubled on a 1-1 count, scoring three runs.

Despite the loss, New Brunswick did collect eight hits in the high-scoring affair. Unfortunately, Manitoba had 14 hits on the way to victory.

Manitoba took an early lead in the second inning when Ty Paddock singled on a 0-1 count, scoring two runs.  After Manitoba scored one run in the top of the fifth, New Brunswick answered with one of their own. Manitoba scored when Colby Lyle induced Shawn Anderson to hit into a fielder’s choice, but one run scored. New Brunswick then answered when Markus Coates was struck by a pitch, driving in a run.

In the bottom of the seventh inning, New Brunswick tied things up at five. An error scored one run for New Brunswick.

Anthony Friessen earned the win for Manitoba. He allowed two hits and one run over one and one-third innings, walking one. Scott Beever and Garrett Virtue entered the game out of the bullpen and helped to close out the game in relief.  Jackson Dekker took the loss for New Brunswick. He went one and two-thirds innings, allowing three runs on three hits and striking out one.

Serge Vautour – the 2018 Home Run Derby Champion – went 3-for-5 at the plate to lead New Brunswick in hits.  For Manitoba, Anderson, Kyle Turner, Dunc Paddock, Mitch Olson, and Shamray each racked up multiple hits on the day.

Team British Columbia, the Coquitlam Angels, scored four runs in the first inning and then rode the fine starting pitching of Shawn Schaefer to the win over the Red Deer Riggers from Alberta.

Schaefer surrendered one run on three hits over four and a third innings, striking out four and walking one. Shawn Hetherington and Dan Britton Foster entered the game out of the bullpen and helped to close out the game for the Angels in relief. 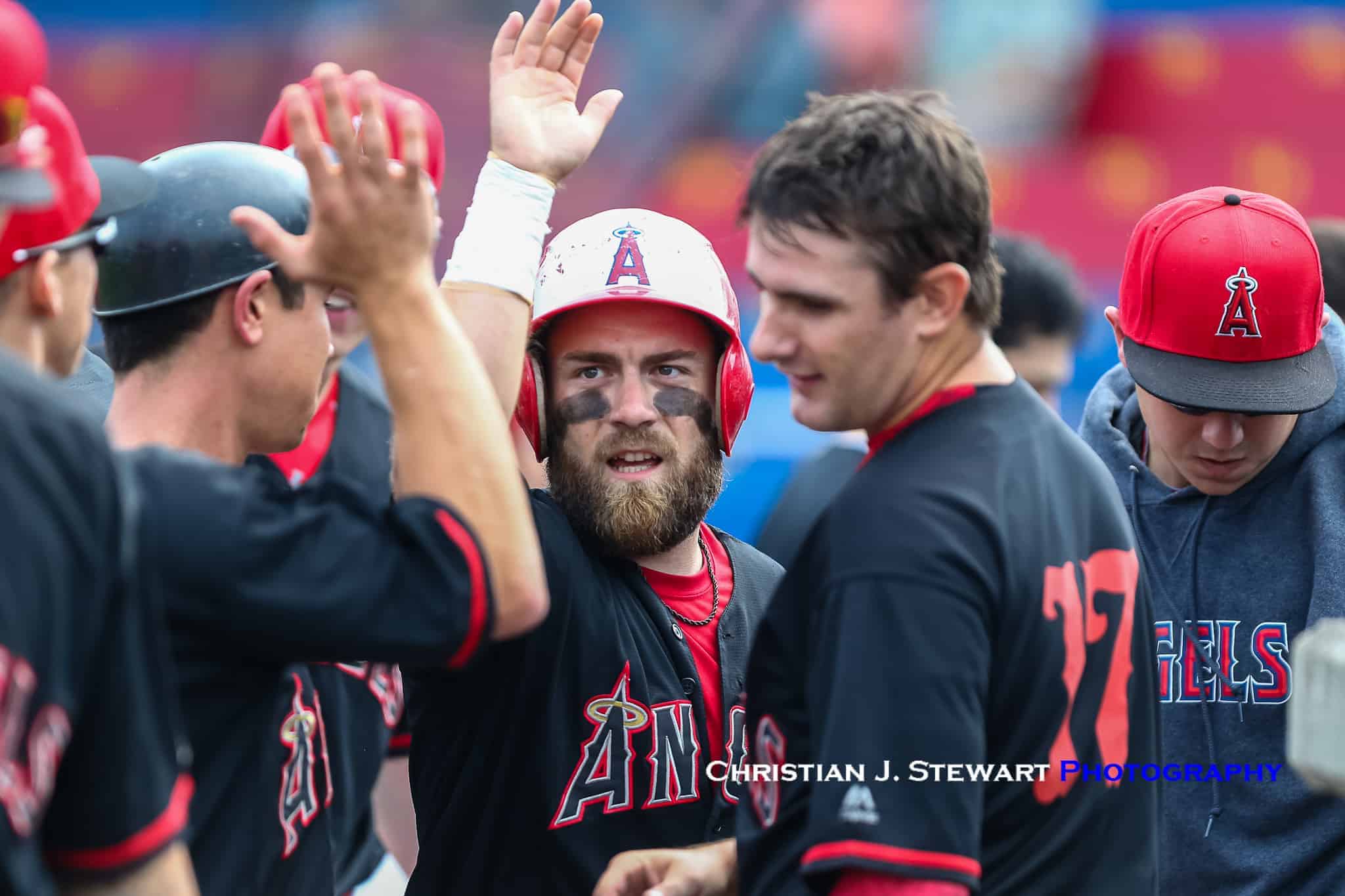 BC’s Jeff Bouchard is congratulated after scoring the first run for Team BC against Alberta Thursday (Photo: Christian J. Stewart)

Matthew Hammond took the loss for Alberta. He surrendered seven runs on 11 hits over four and two-thirds innings, striking out six and walking zero.

British Columbia totaled 12 hits in the game. Darren Honeysett, Alex Graham, Jeff Bouchard, and Thompson all had multiple hits for the Angels while six different players had hits for the Riggers. 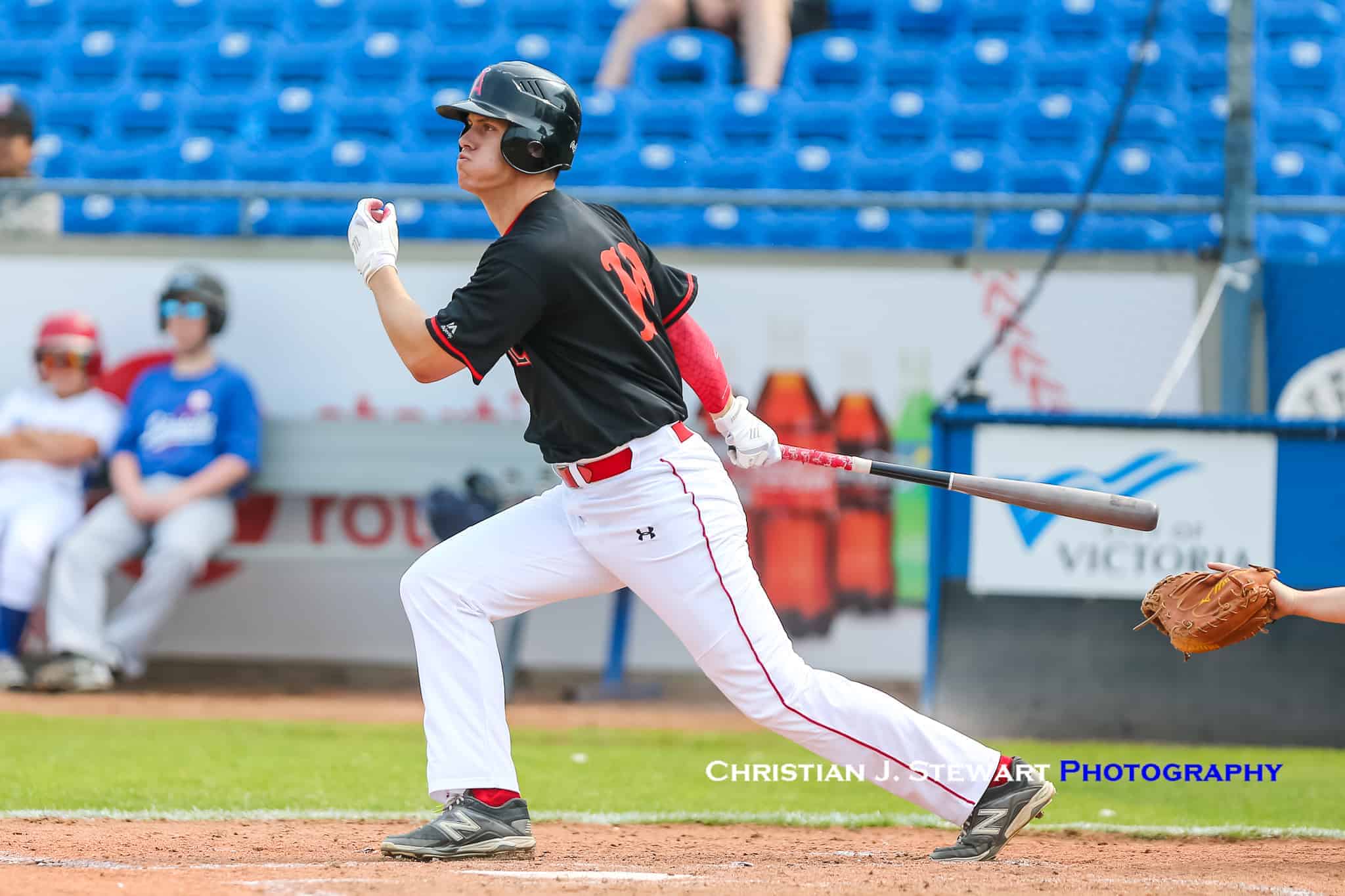 Quebec scored three runs in the first inning and that would be all the runs they would need as they used the shut-out pitching of Francois Lafreniere and Philipe Saad to cruise to the 4-0 win.

Lafreniere allowed six hits and zero runs over five innings, striking out six and walking zero. Saad threw two innings in relief out of the bullpen.  Adam Paish took the loss for Ilderton (ON2). He lasted six innings, allowing eight hits and four runs while striking out two.

Quebec racked up eight hits in the game. Emmanuel Forcier and Nicolas Loiseau each managed two hits to lead (B) Quebec.  Ryan Hartig had a pair of hits for Ilderton in the losing effort, their second loss of the day.