Victoria’s Duncan Blades would have a three-hit night including a walk-off RBI single to give the Mavericks a 4-3 win over the Red Deer Riggers in National action Friday night in Victoria (Photo: Christian J. Stewart)

August 25, 2017, Victoria, BC – A Duncan Blades RBI single in the bottom of the seventh inning gave the Victoria Mavericks (Host) a walk-off 4-3 win over the Red Deer Riggers (Alberta 2) in the feature game Friday night at the 2017 Baseball Canada Senior Men’s National Championships being played at Royal Athletic Park in Victoria. 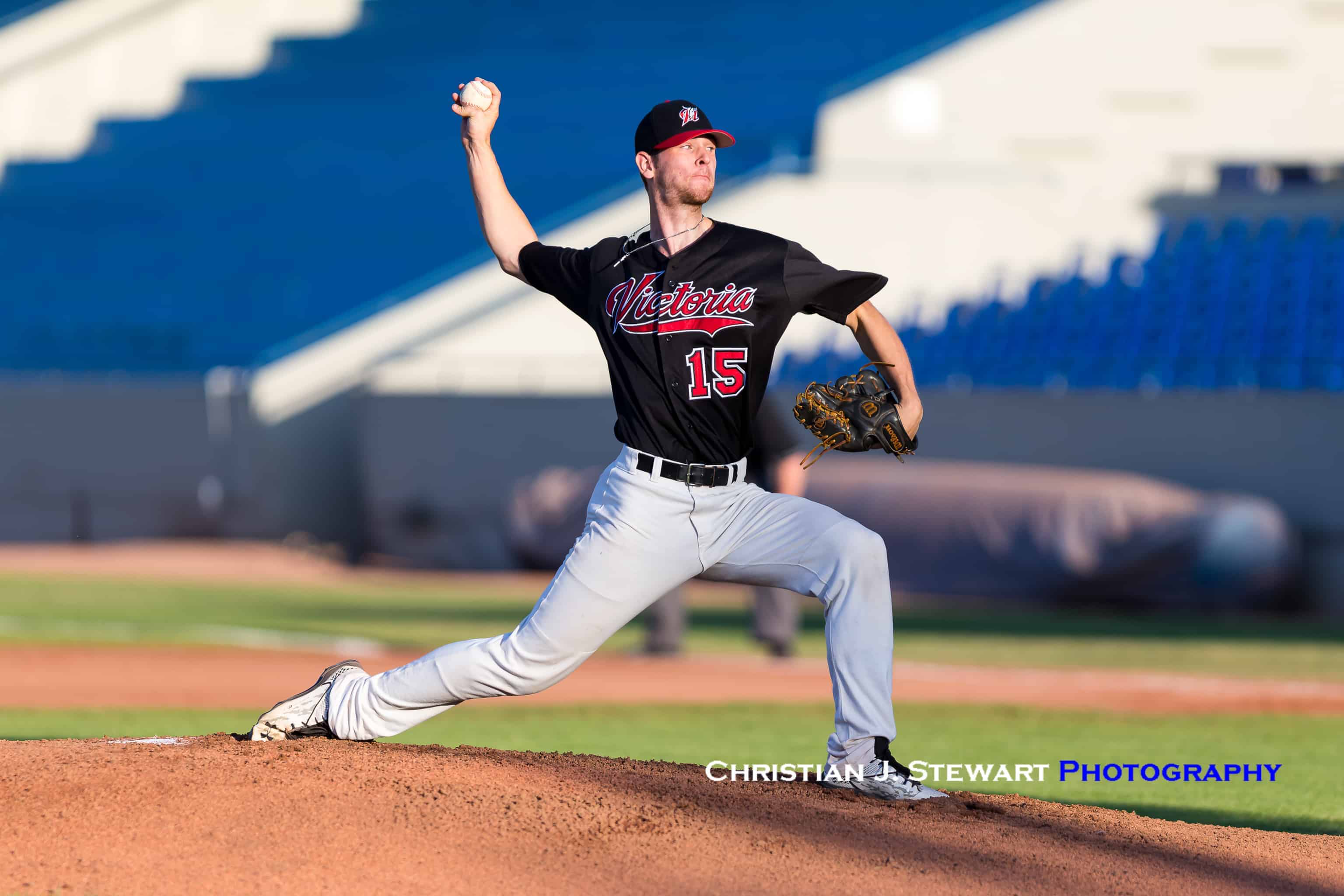 The win was the first for the Mavericks and keeps their tournament playoff hopes alive, as they are now tied with Tecumseh (Ontario 1) for third in Pool A with a record of 1-2. The top three teams in each pool advance to playoff action. 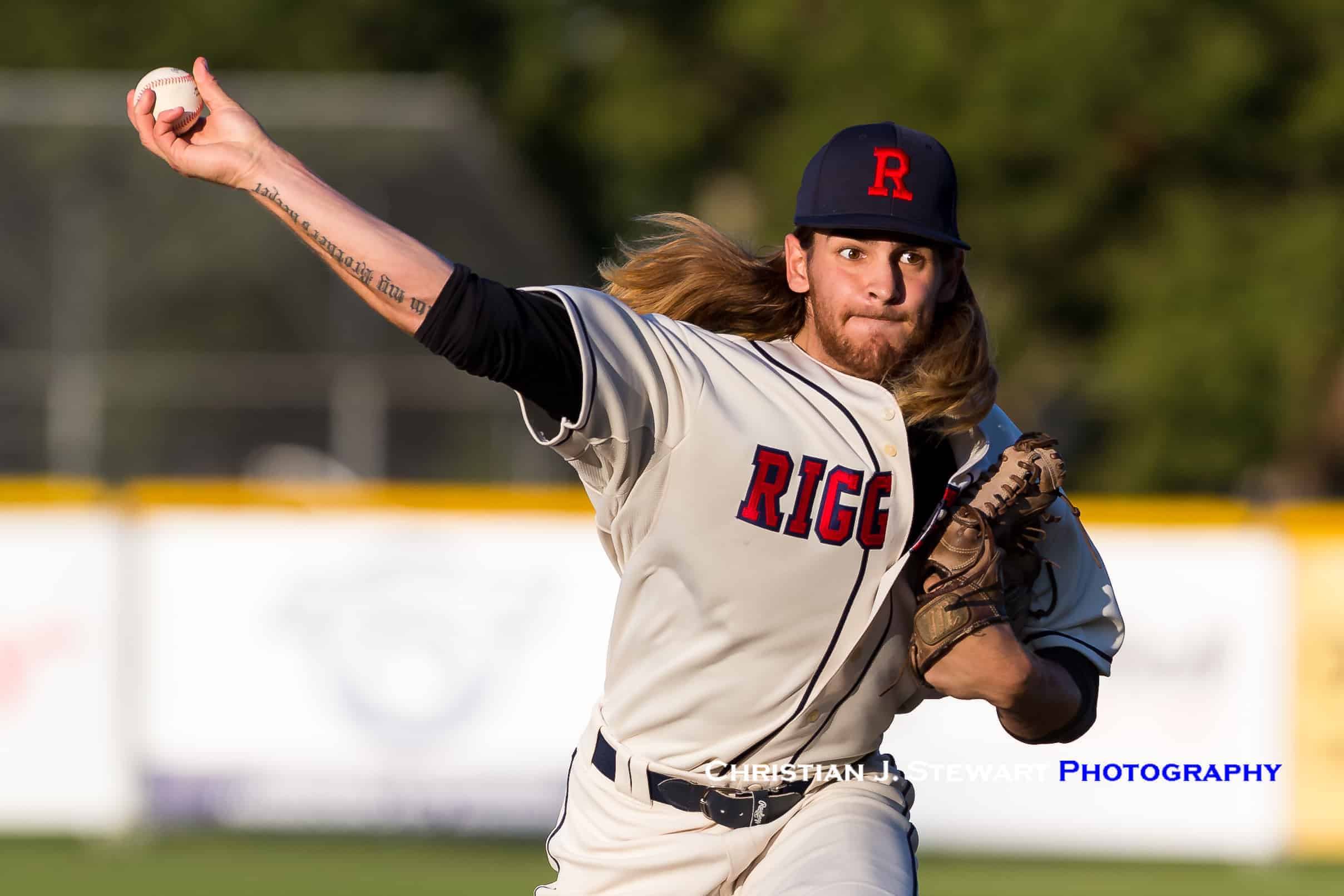 The Riggers, who earlier in the day defeated Manitoba 4-2 in a game at Lambrick Park, were looking to join the Sherwood Park A’s (Alberta 1) and Fredericton Royals (New Brunswick) with perfect 3-0 records after two days of action, but now at 2-1, sit second in Pool A, just behind Fredericton. 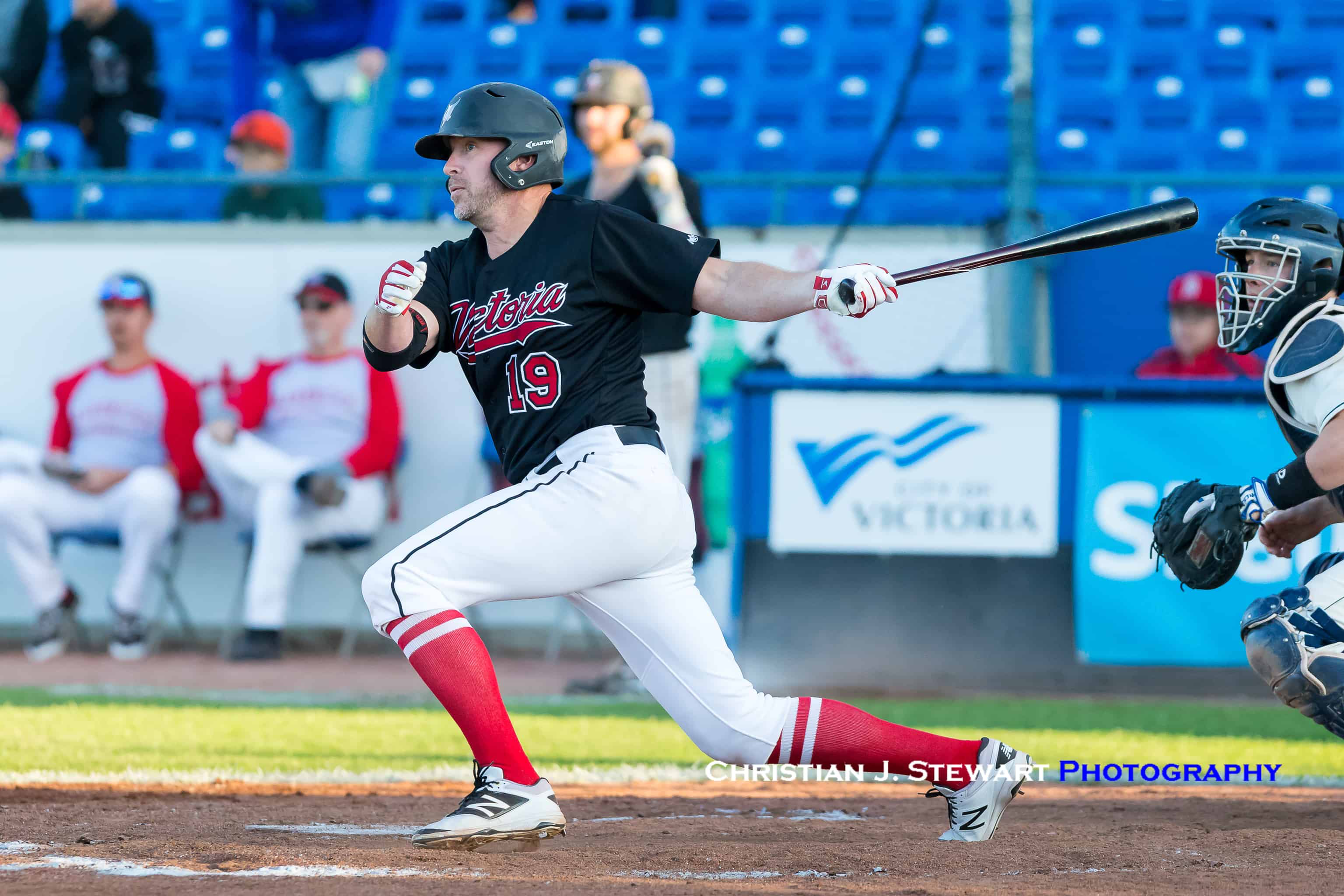 Lanny Burrows would have a pair of hits for Victoria on Friday against Red Deer, including an RBI single in the first inning (Photo: Christian J. Stewart)

Sherwood Park, who jumped out to two wins on Thursday, won again Friday, narrowly defeating Newfoundland 7-6 in a game at Lambrick Park, while the Royals, who also won twice Thursday, thumped the Tecumseh Thunder (Ontario 1) 18-4 at Lambrick Park on Friday night. 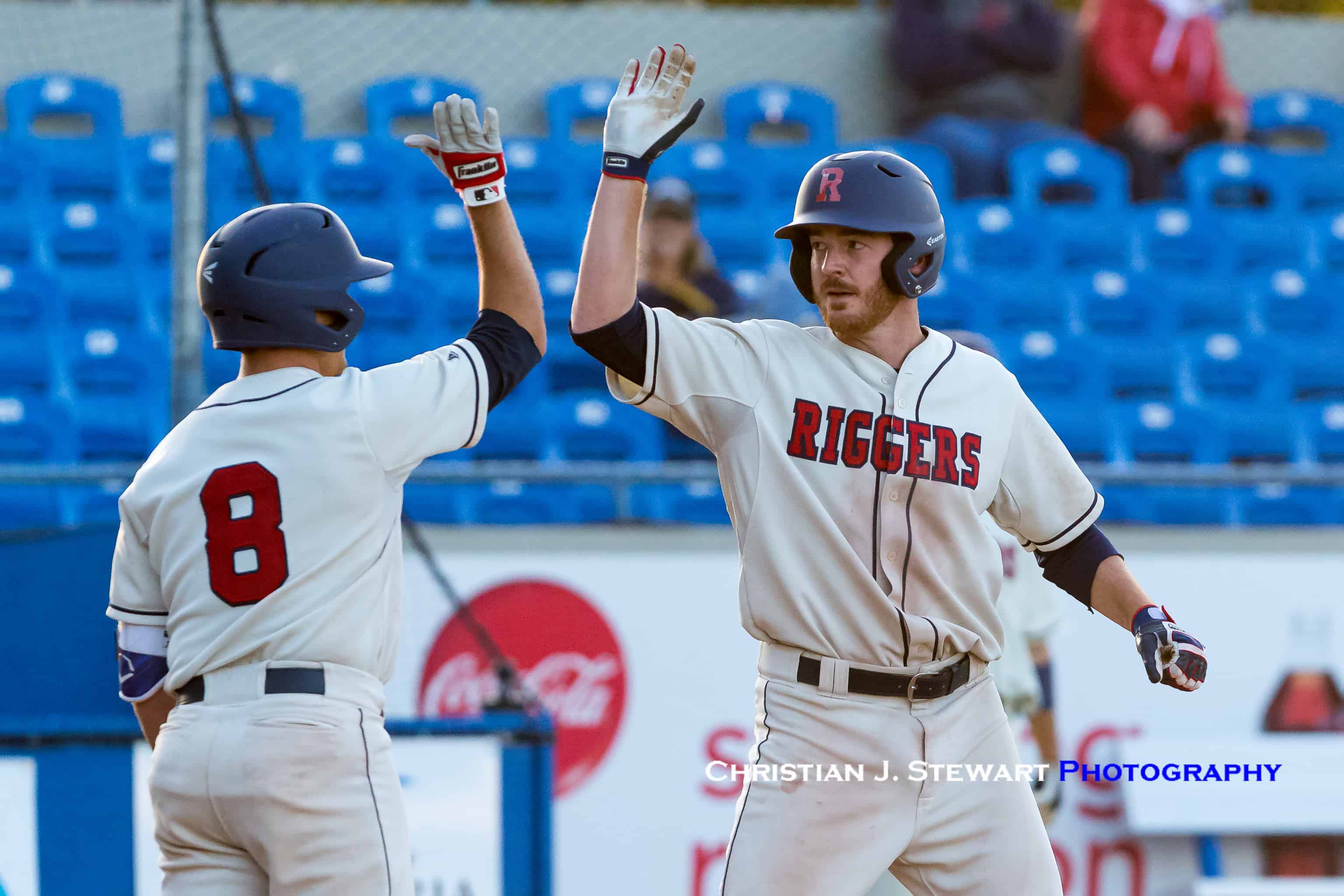 Fredericton sits atop the Pool A standings, while Sherwood Park is on top on Pool B, with the Burnaby Bulldogs (British Columbia) sitting in second in Pool B at 2-1.  The Bulldogs won twice Friday, defeating Dartmouth (Nova Scotia) 8-6 and the Mississauga Twins (Ontario 2) 10-0 to rebound after their loss to Sherwood Park on Thursday. 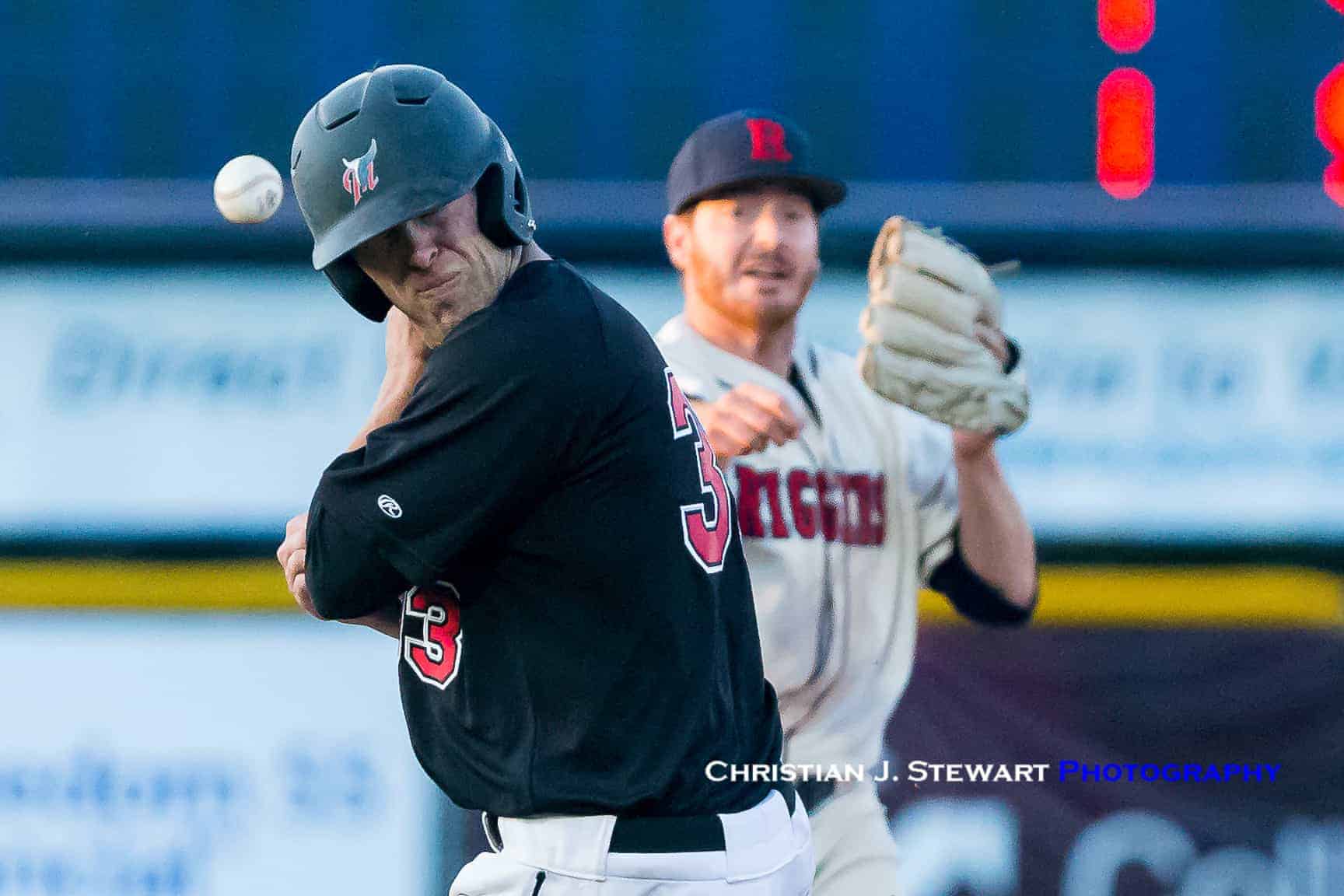 In Friday’s feature game between the Riggers and Mavericks, it was a tight pitching affair early between the Mavericks Luke Manuel and the Riggers CJ Lewington who battled to a 2-2 tie through four and one-half innings of play.

The Mavericks did have plenty of chances to break the game wide open in that span and were almost left wondering what could have been, as they had the bases loaded four times in the first five innings, but manged just three runs for their efforts.  The first came on a Lanny Burrows RBI single in the first, the second run on a Connor Moughtin RBI single in the fourth and the third on a bases loaded fielders choice in the fifth that put the Mavericks briefly in the lead 3-2 after five complete. 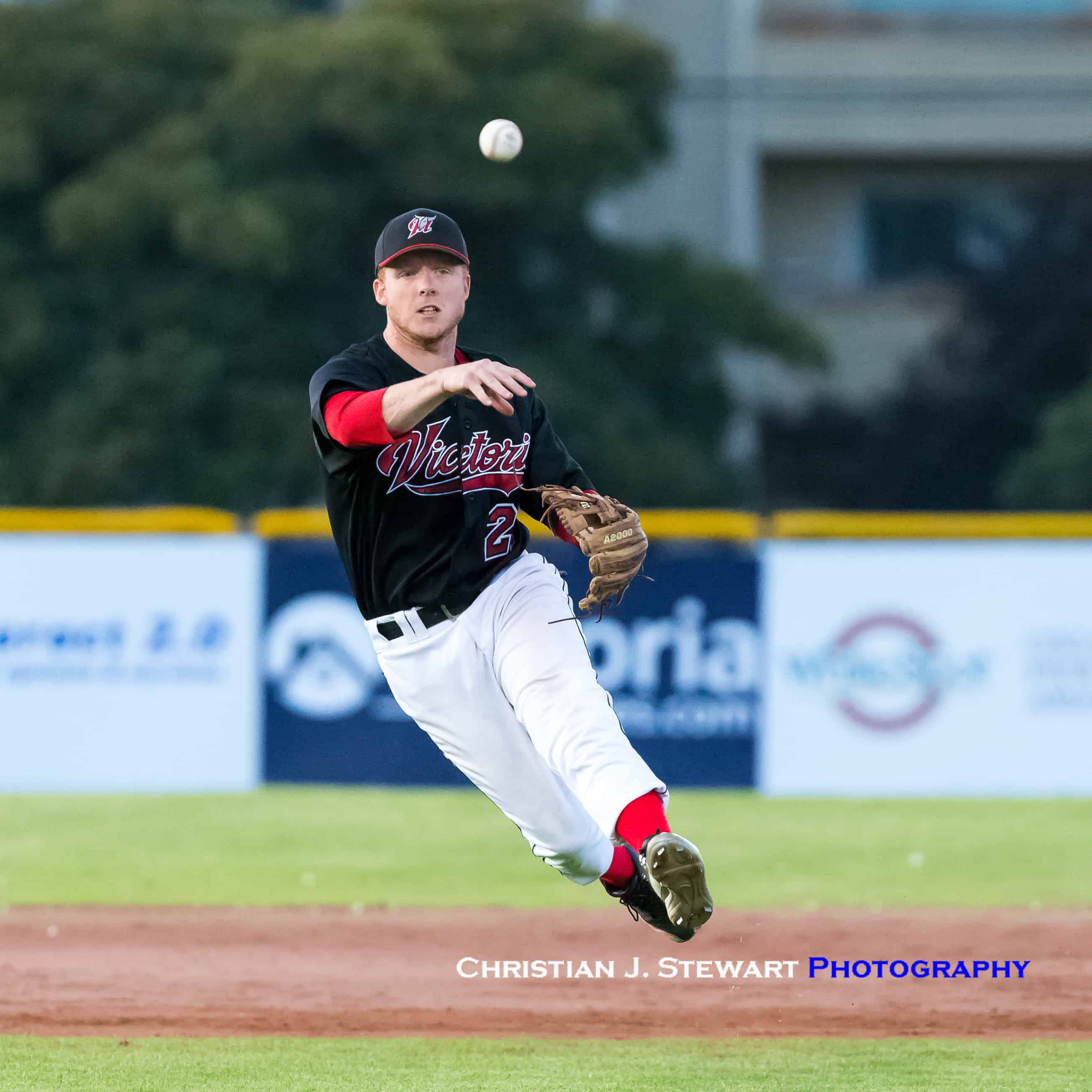 The Mavericks lead did not last long, as the Rigger’s Jarett Chatwood launched a solo, two-out home run off Manuel in the top of the sixth to tie the score 3-3. 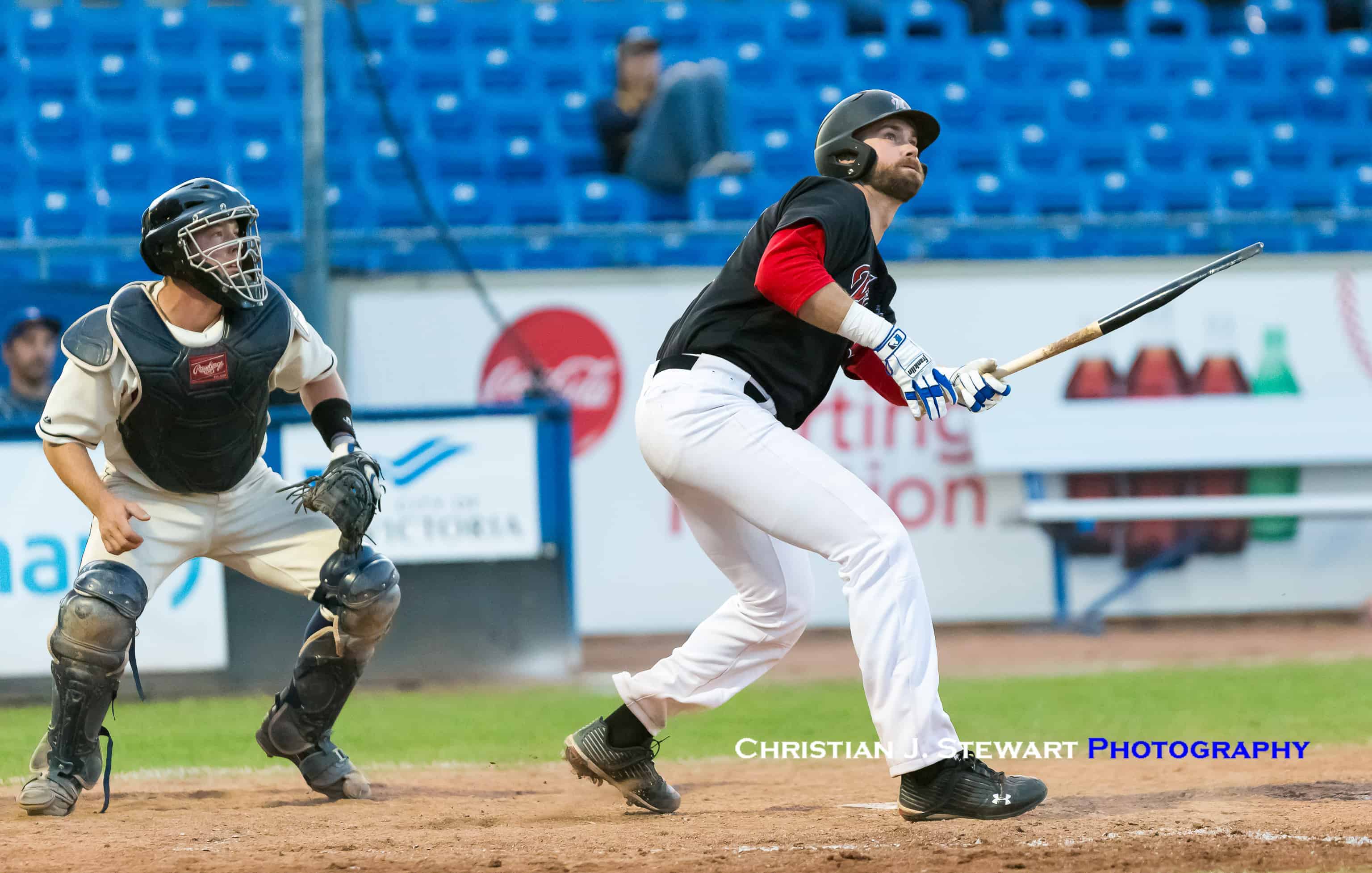 There was not much left of his bat, but Victoria’s Kyle Orr would get enough on the ball for this to end up as a double against Red Deer Friday (Photo: Christian J. Stewart)

That set the stage for Blades, who stroked his third hit of the night into centre field, scoring Biro and sending the Mavericks off the bench in celebration.

Gibson gets the win in relief for the Mavericks, while Petermen takes the loss.

Game capsules from the other six games played on Friday can be found below.

Game 8 – Burnaby Bulldogs (BC) – 8 Dartmouth Moosehead Dry (NS) – 6
The Burnaby Bulldogs (British Columbia) scored three runs in the first inning and received solo home runs from Braeden Alleman and Jon Thomas to hang on to an 8-6 win over the Dartmouth Moosehead Dry (Nova Scotia) in opening action of Day 2 of the 2017 Baseball Canada Senior Men’s Nationals at Royal Athletic Park in Victoria. Burnaby’s first inning outburst came courtesy of two Dartmouth errors and gave Bulldogs starter Josh Larson all the support he would need, until the sixth, when Dartmouth got to him for three runs to cut a 5-1 lead to 5-4 and send Larson out of the game. The Bulldogs would then respond with three in the bottom of the sixth to increase the lead to 8-4. Dartmouth got a two-run, one-out homer from Anthony McKinley – his third hit of the day – to make things close in the ninth, but Bulldogs closer Brandon Chernoff would limit the damage to that and close out the 8-6 win. Jaxon Valke would contribute to the Bulldogs attack with a pair of hits and an RBI, while Larson gets the win with Chernoff getting the save in relief. Justin Davies takes the loss for Dartmouth going five complete, with Liam Logan seeing action in relief. 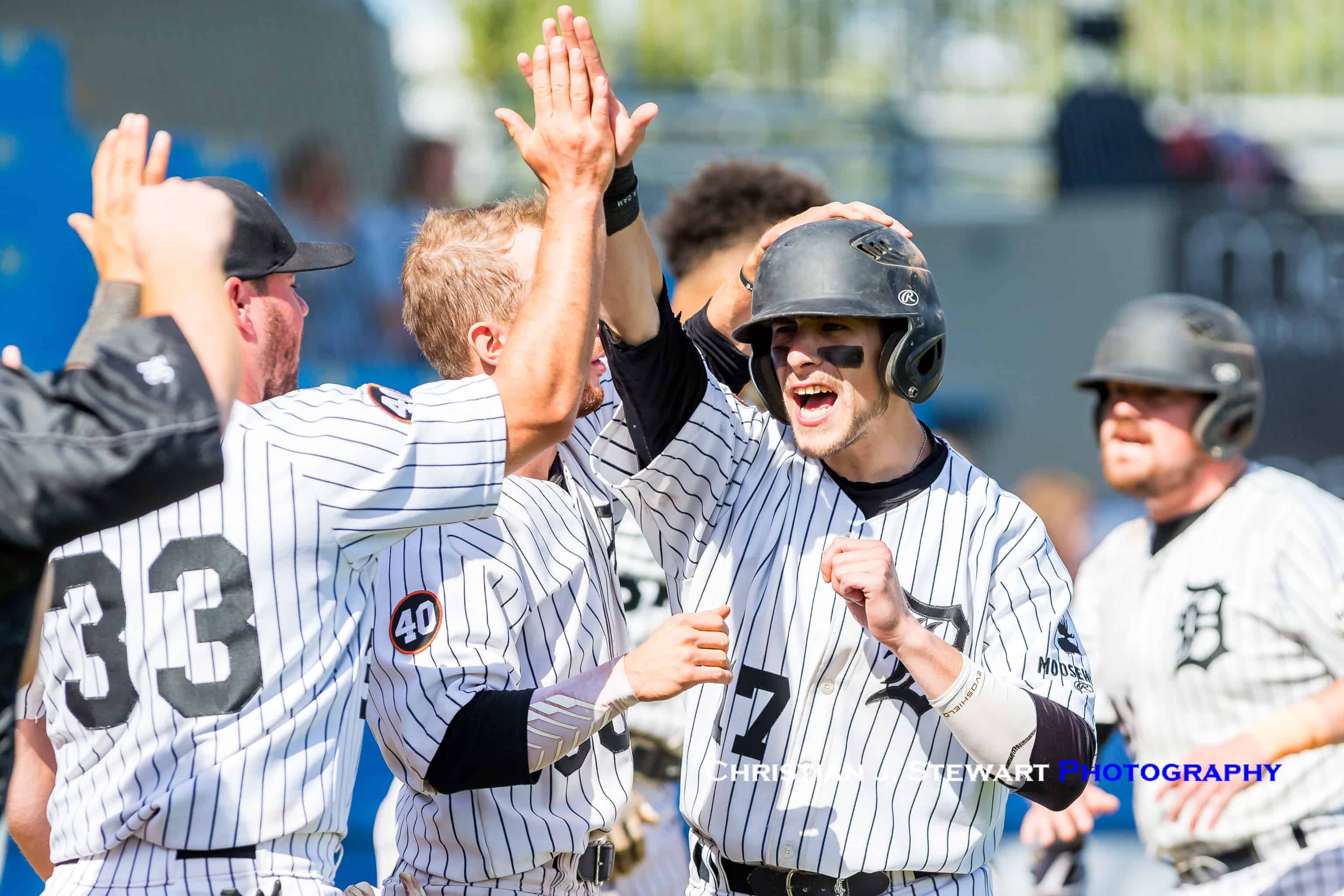 Dartmouth’s Billy Hartley (17) shares high fives with his team after scoring a run against the Burnaby Bulldogs in Friday morning action. Dartmouth would drop an 8-6 decision to the Bulldogs (Photo: Christian J. Stewart)

Game 9 Tecumseh Thunder (ON1) – 6 Victoria Mavericks (Host) – 1
Friday’s second game of the day at Royal Athletic Park was a classic pitching duel early on between Tecumseh’s Kyle Breitner and Victoria’s Jordan Broatch, who both took one hitters into the sixth inning of a quickly played affair. Broatch’s only mistake to that point was a first inning, two-run homer to Tecumseh’s Eric Cunningham, while Breitner took a no-hitter into the fourth before giving up a double to Griffin Andreychuk. Andreychuck would get to Breitner again in the sixth with a one out triple and then come in to score on a Duncan Blades single to put Victoria on the board. 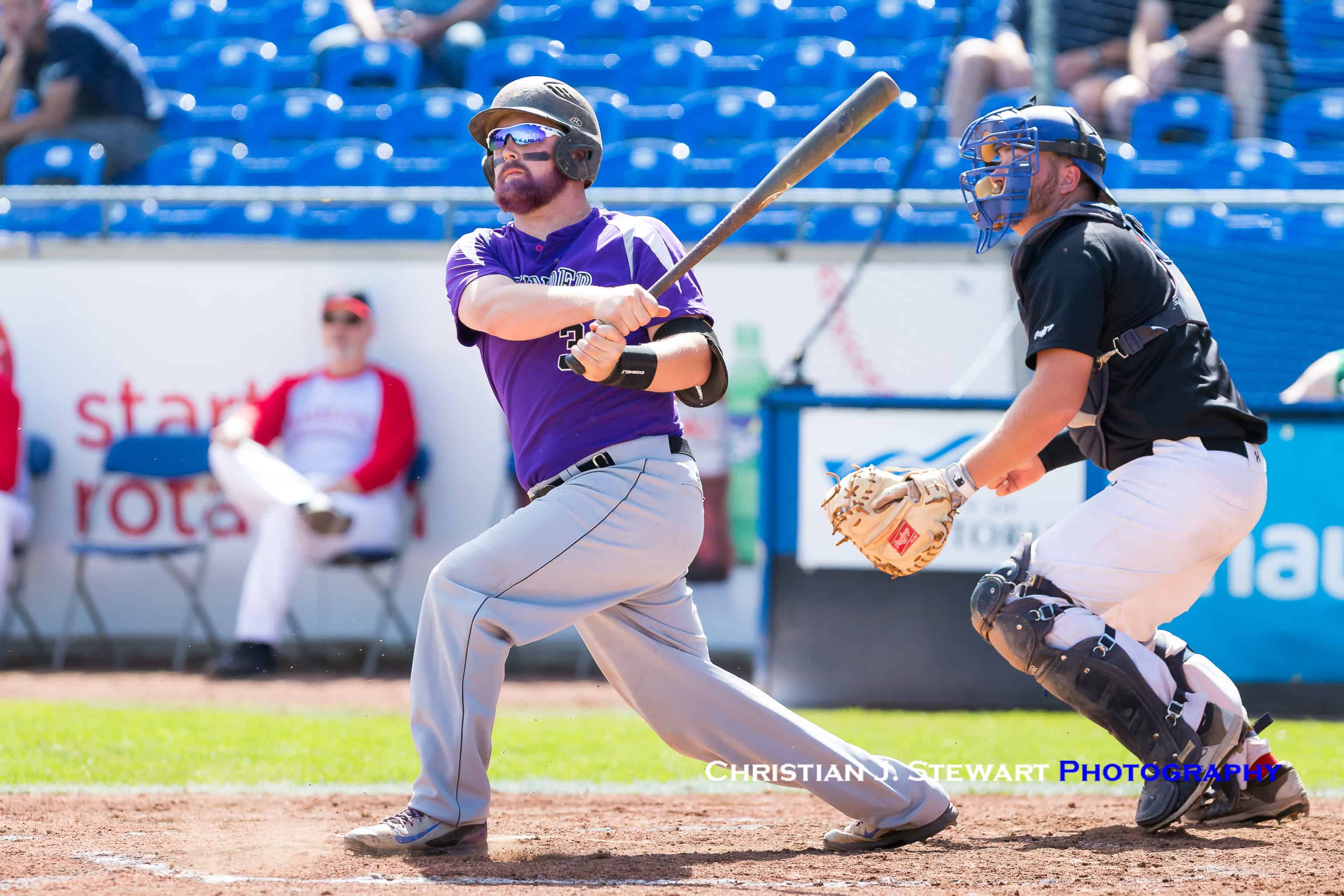 Tecumseh would get that right back in the bottom of the sixth when Brandon Gignac would lead off with a triple and then score on a Curtis Lambkin single. A three-run home run by Tecumseh’s Keifer Quick then put the game out of reach for the Mavericks and ended Broatch’s day. Breitner would finish the complete game win, giving up just the one run on three hits, while walking two and striking out four. Broatch takes the loss, giving up six runs on four hits, while walking two over 5.2 innings of work. Matt Campbell cleaned up in relief for the Mavericks, who fall to 0-2 on the tournament. 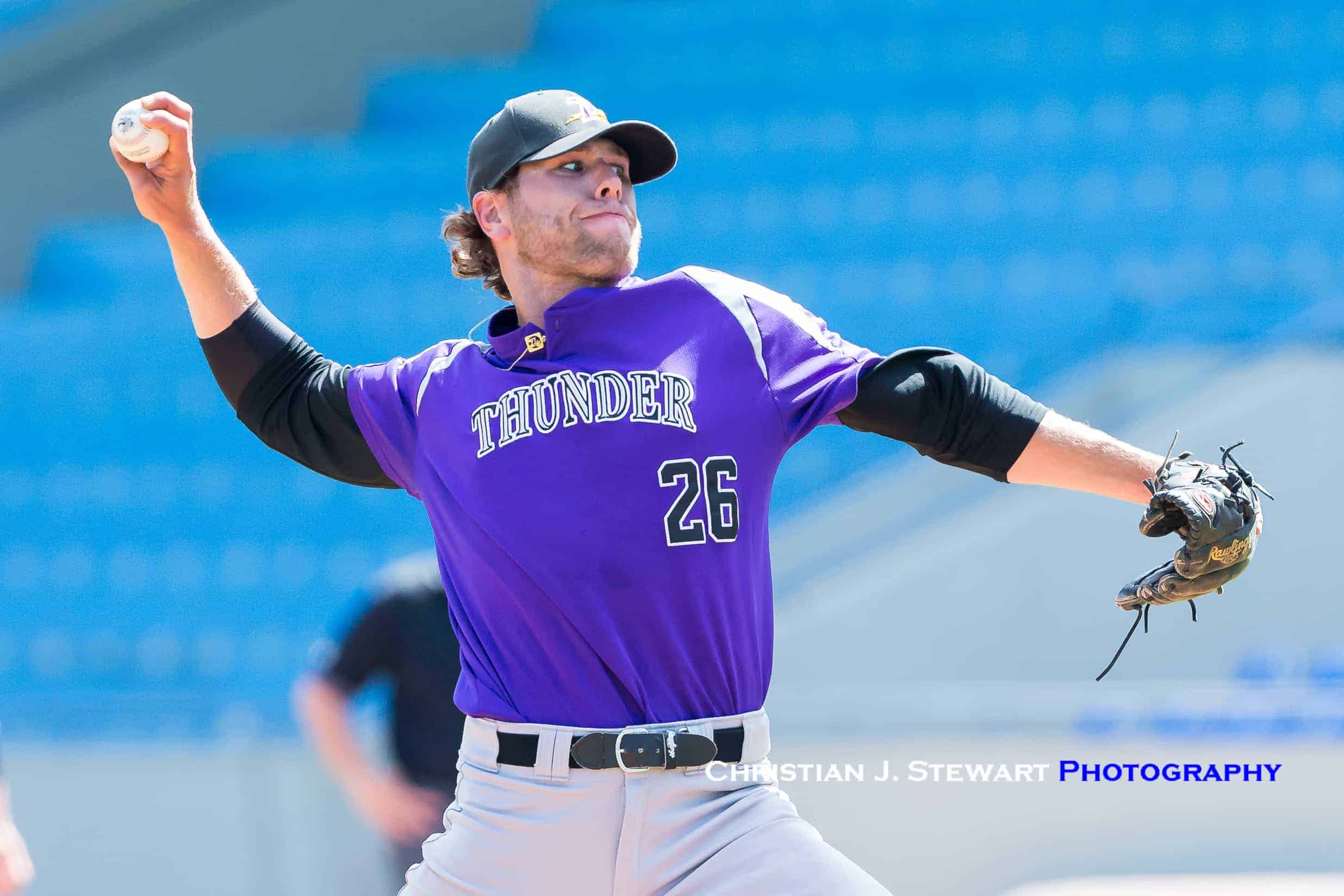 Game 10 Red Deer (AB2) – 4 Manitoba -2
The Red Deer Riggers (AB2) moved to 2-0 on the tournament with a 4-2 win over Manitoba at Lambrick Park on Friday. The Rebels, who scored three of their runs in their very first at bats, were led by designated hitter Kerry Boon, who went three for three with three RBIs, as well as JP Willner who walked twice and scored a pair of runs. Manitoba starter Davin Gulbransen gets the win, going six innings and giving up two runs on five hits, while walking just one. Willner came on for an inning of scoreless relief. For Manitoba, starter Elliot Desilets gets the loss, going just three innings and giving up all four Alberta runs on three hits, while walking four and striking out two.

Game 11 – Burnaby Bulldogs (BC) – 10 Mississauga Twins (ON2) – 0
Scott Webster had a three-run home run and Kyle McComb had three hits, including a double and three runs scored to lead the Burnaby Bulldogs (BC) to a 10-0 mercy-rule shortened win over the Mississauga SW Twins (ON2) in 3:00 pm game action at Royal Athletic Park. The win was the second of the day for the Bulldogs and keeps them in the hunt in Pool B with a record of 2-1. 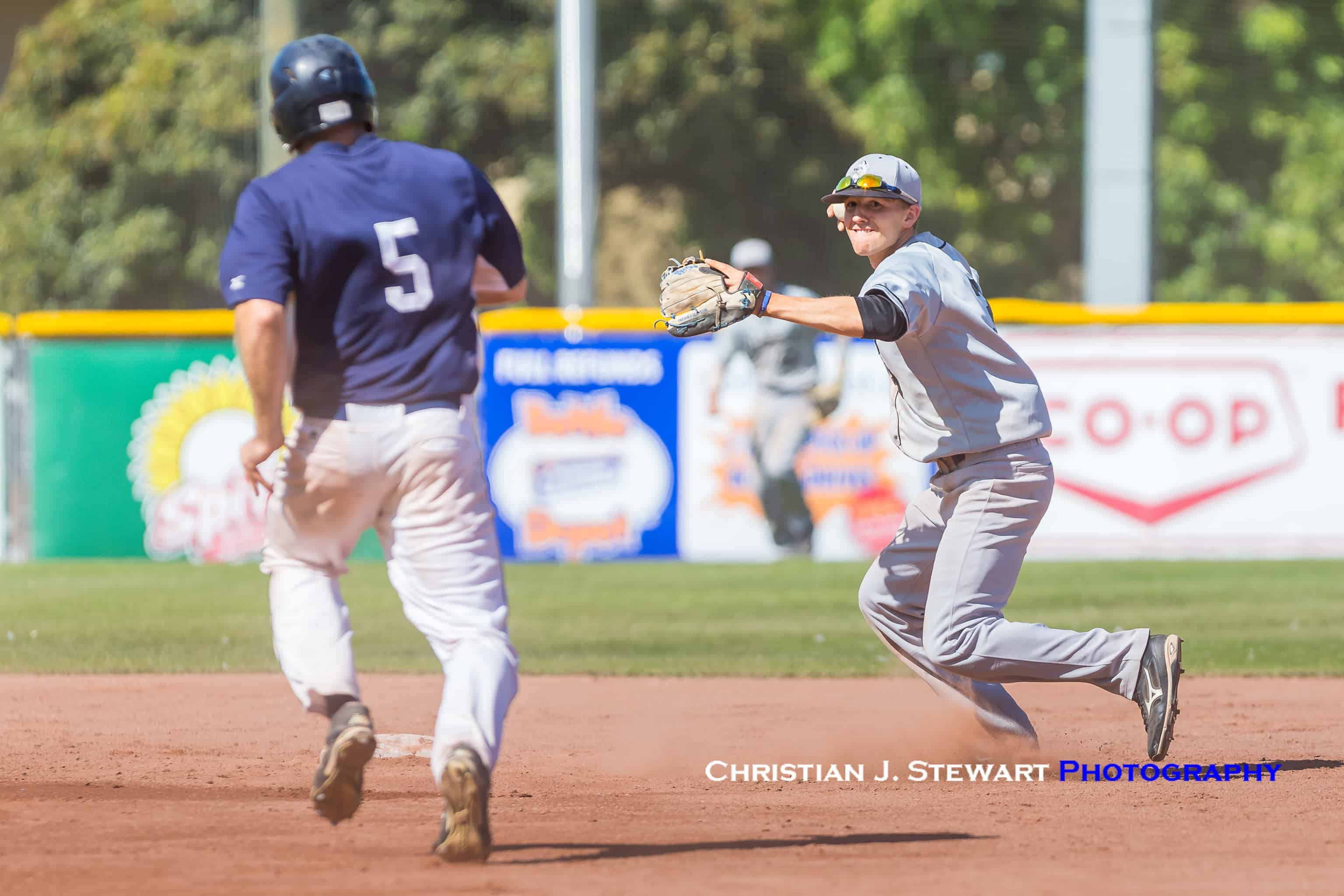 Helping the Bulldogs cause Friday afternoon was starting pitcher Shawn Andersen who pitched a complete game two-hitter, his only damage being a second inning single by Mississauga’s Jordan Grant and a fifth inning single from John Broll. Mississauga’s Jordan Petruska takes the loss, going just 2.2 innings, giving up six runs on four hits, while walking three and striking out one. Tomas Rincon and Adam Banski saw action in relief. The Bulldogs will wrap up their round robin Saturday at 2:00 pm against Newfoundland, in a game at Lambrick Park. 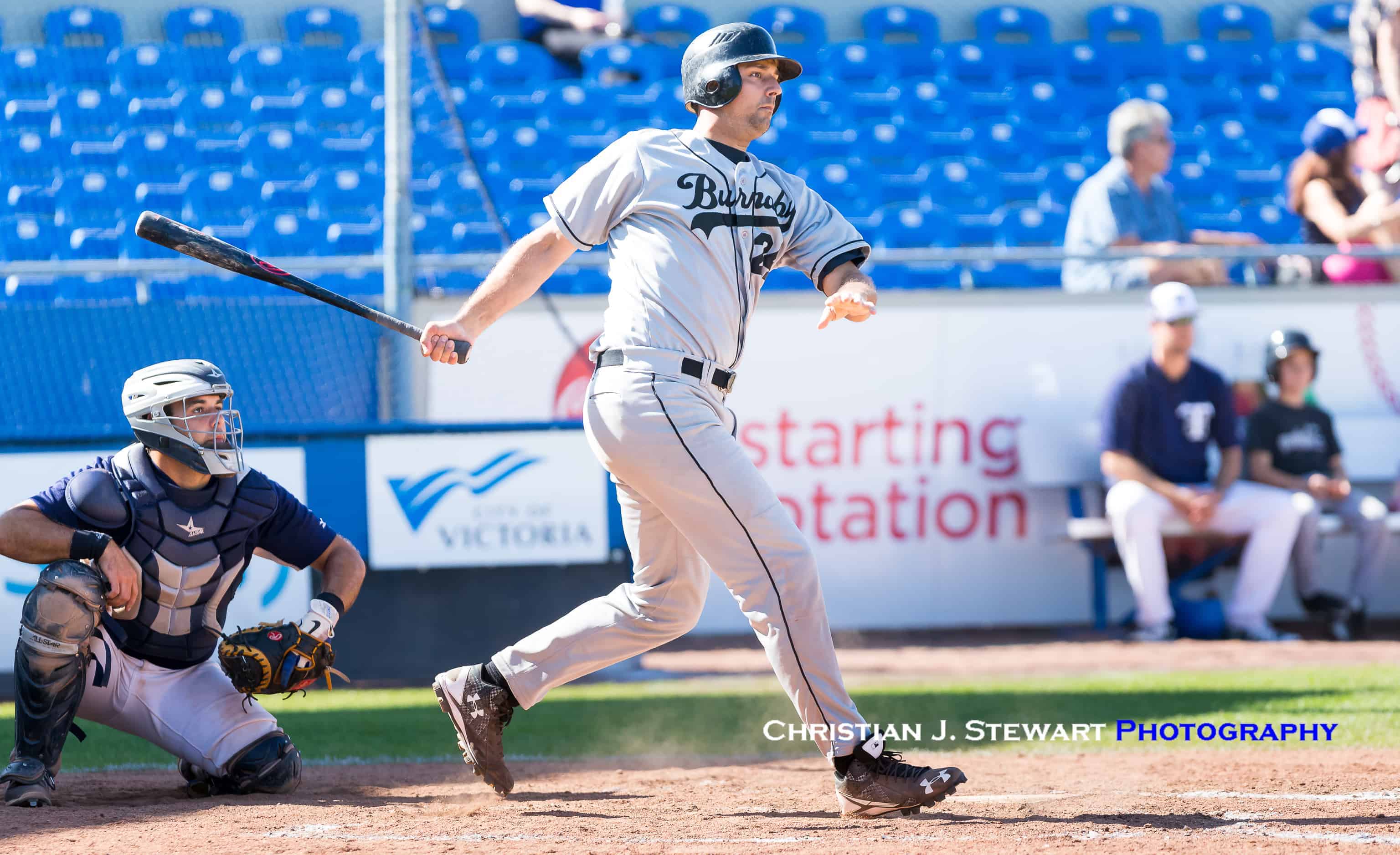 Burnaby’s Scott Webster had a three-run home run and one other RBI to lead the Burnaby Bulldogs (BC) to a 10-0 mercy-rule shortened win over the Mississauga SW Twins (ON2) on Friday, their second win of the day (Photo: Christian J. Stewart) 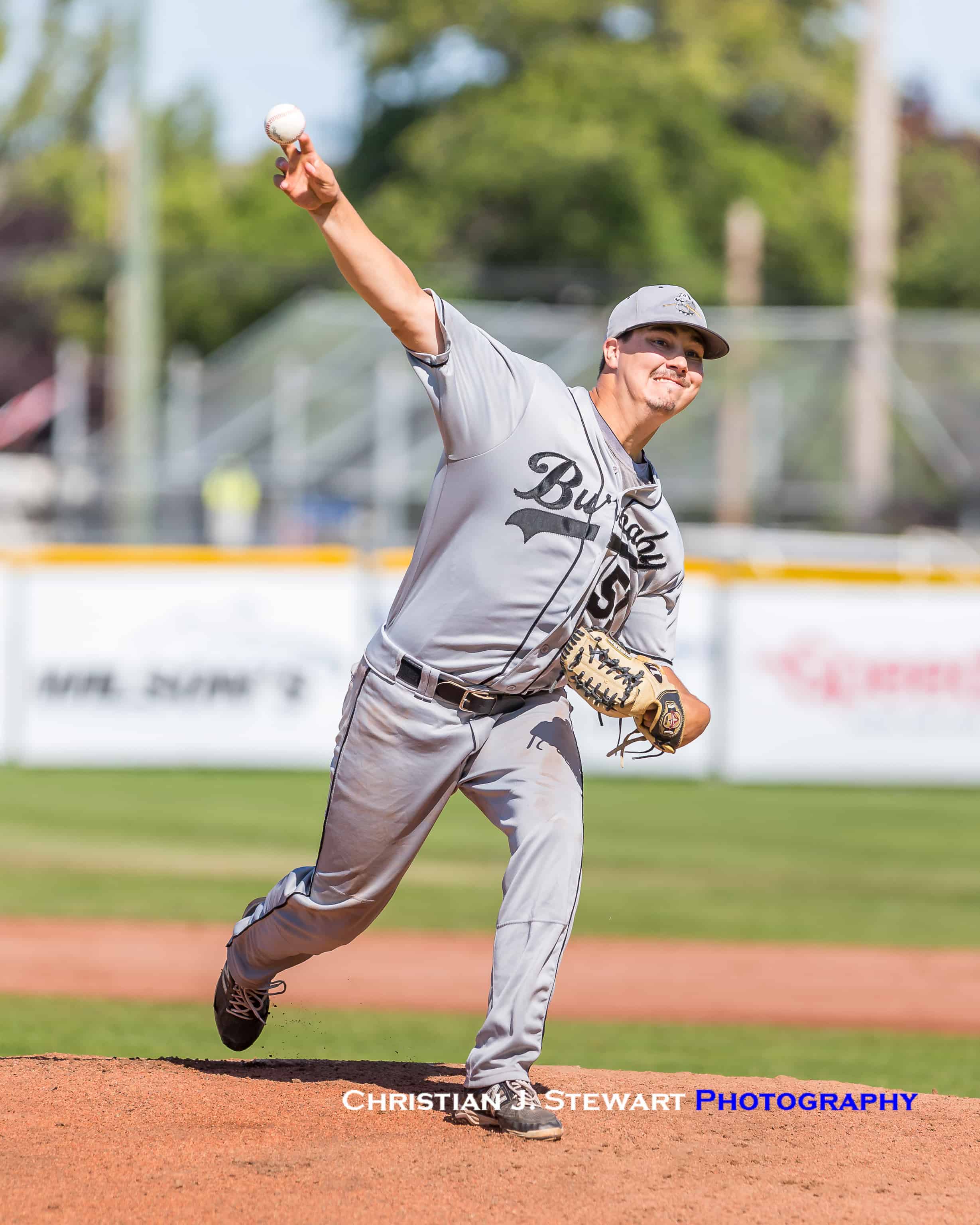 Game 12 Sherwood Park A’s (AB1) – 7 RMM Gonzaga Vikings (NFLD) – 6
The RMM Gonzaga Vikings (NFLD) scored a pair of runs in each of the fifth and sixth innings to overcome a 6-2 deficit, only to give up a run to the Sherwood Park A’s in the bottom of the sixth and drop a 7-6 decision in the 3:00 pm game at Lambrick Park. Playing hero for the A’s was Cole Schneider with an RBI single in the sixth, his second hit and second RBI of the game. The A’s also had two hit games from Drew Miller and Cody Pendergast and a triple from Cory Scammell in the nine-hit attack. Pacing the 11-hit Newfoundland offence were Troy Croft, Aaron Flood and James Walsh with two hits each, incluidng doubles from Croft and Walsh. Sherwood Park’s Matthew Hammond gets the win with 1.2 innings of scoreless and hitless relief, while the Viking’s Matt Colbourne takes the complete game loss, giving up nine hits, while walking six and striing out four. With the win the A’s become the first team in the tournament to hold a 3-0 record and now occupy top spot in Pool B. They will complete their round robin against Nova Scotia in an 11:00 am game Saturday at Royal Athletic Park.

Game 13 – Fredericton Royals (New Brunswick) – 18    Tecumseh Thunder (Ontario 1) – 4
The Fredericton Royals (New Brunswick) scored 14 runs in their final two at bats to soar to a complete seven-inning 18-4 win over the Tecumseh Thunder (Ontario 1) in final Friday game action at Lambrick Park. The Royals were led by Dave Barr and Mark Phillips who combined for six RBI each, with Phillips clubbing two three-run home runs, while Barr added his own three-run homer to go with an RBI single and two-RBI double. Fredericton’s Sam Lund went the complete game for the win, giving up four runs on seven hits, while walking two and striking out six.  Brandon Lindquist takes the loss for the Thunder who now fall to 1-2 on the tournament.  Fredericton moves to 3-0 and sits in first in Pool A.