July 27, 2017, Victoria, BC –    It was “get away” day and a special daytime business person’s promotion Thursday, as the Victoria HarbourCats and Kelowna Falcons played the rubber match of their three-game West Coast League series, with the Falcons scoring three runs in the top of the ninth inning to come away with a 9-7 victory at Royal Athletic Park in Victoria. 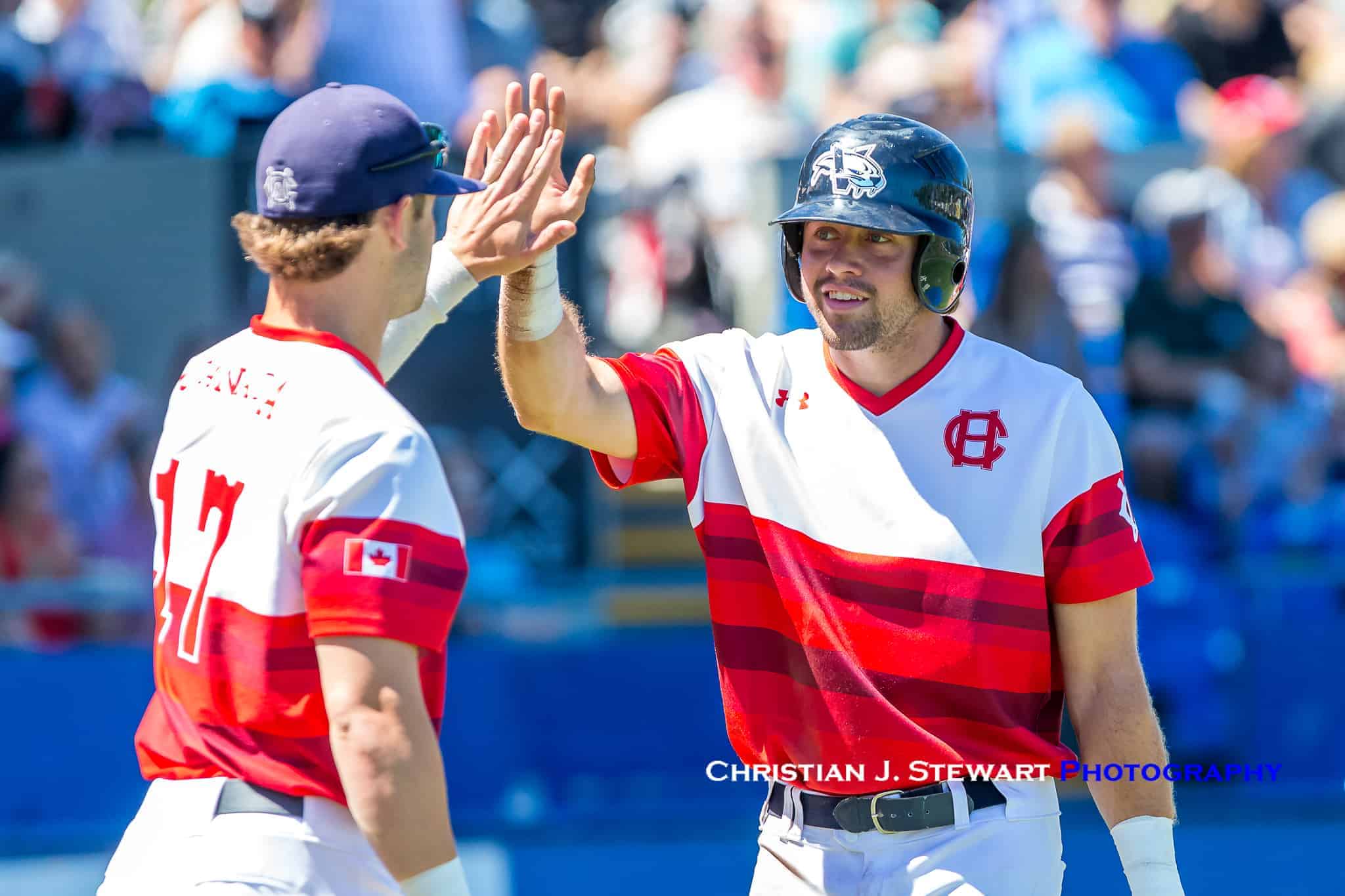 The Falcons used two big innings to propel themselves to victory, including a four-run inning off Victoria starter Taylor Prokopis in the sixth, capped by a monster home run from Kade Hall that erased a 3-1 Victoria lead and then a three-run inning in the ninth, off the normally reliable Victoria closer Travis Kuhn, to erase a 7-6 HarbourCats lead and put the game away.

The big blow in that inning was a two-run home run from Logan Steinberg that took the sails out of the HarbourCats and the 1,802 fans who snuck away from work to come watch the game. 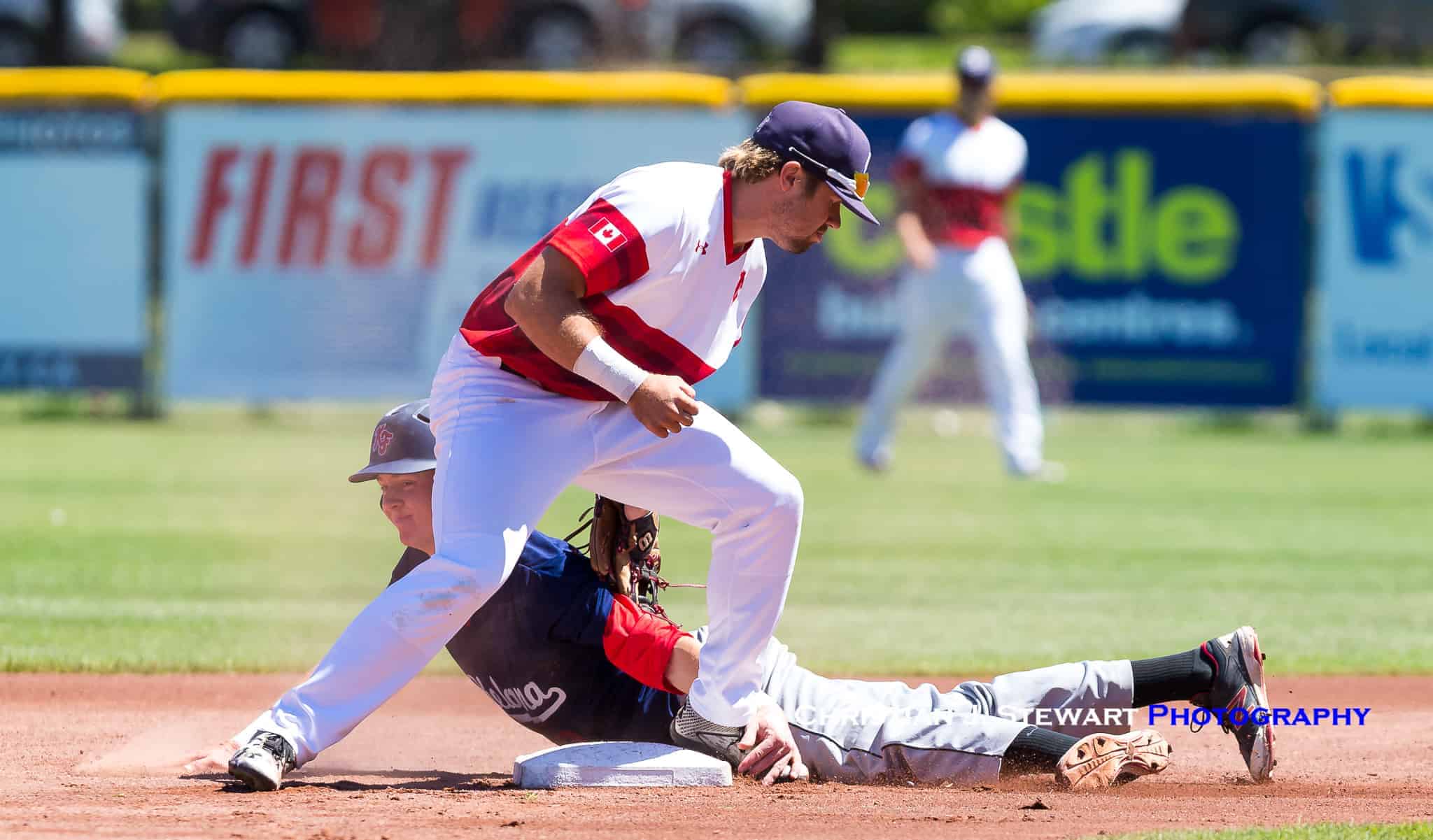 Kelowna’s Taylor Wright was ruled safe on this stolen base attempt despite not having a hand on the bag and being tagged by Victoria second baseman Tucker Johnson (Photo: Christian J. Stewart)

The Kelowna last inning heroics erased what would have been a thrilling HarbourCats comeback, as following the Kelowna four-run sixth, Victoria would score three of their own to jump into a 6-5 lead.  Kelowna would score one in the eighth, as would Victoria, to set up the 7-6 lead and the save opportunity for Kuhn in the ninth. 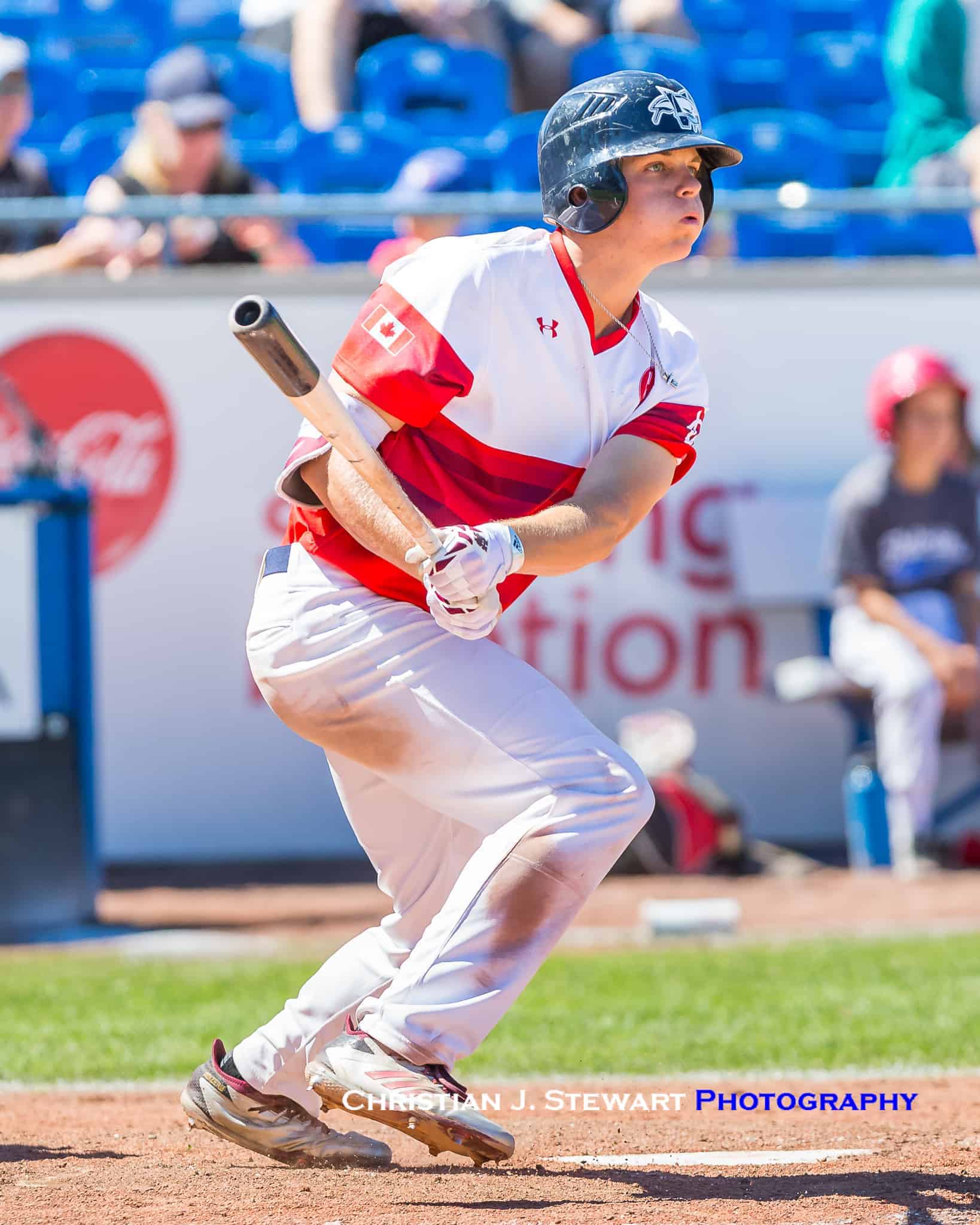 Hunter Vansau had a great day at the plate for the HarbourCats, notching three hits and a walk in the loss to Kelowna (Photo: Christian J. Stewart)

It was not to be, as Kuhn began the inning by hitting lead-off hitter JT Williams and then giving up an RBI double to the gap to Trent Tinglestad, his third hit of the day.  Steinberg then followed with his one-out homer to put the Falcons into the lead. 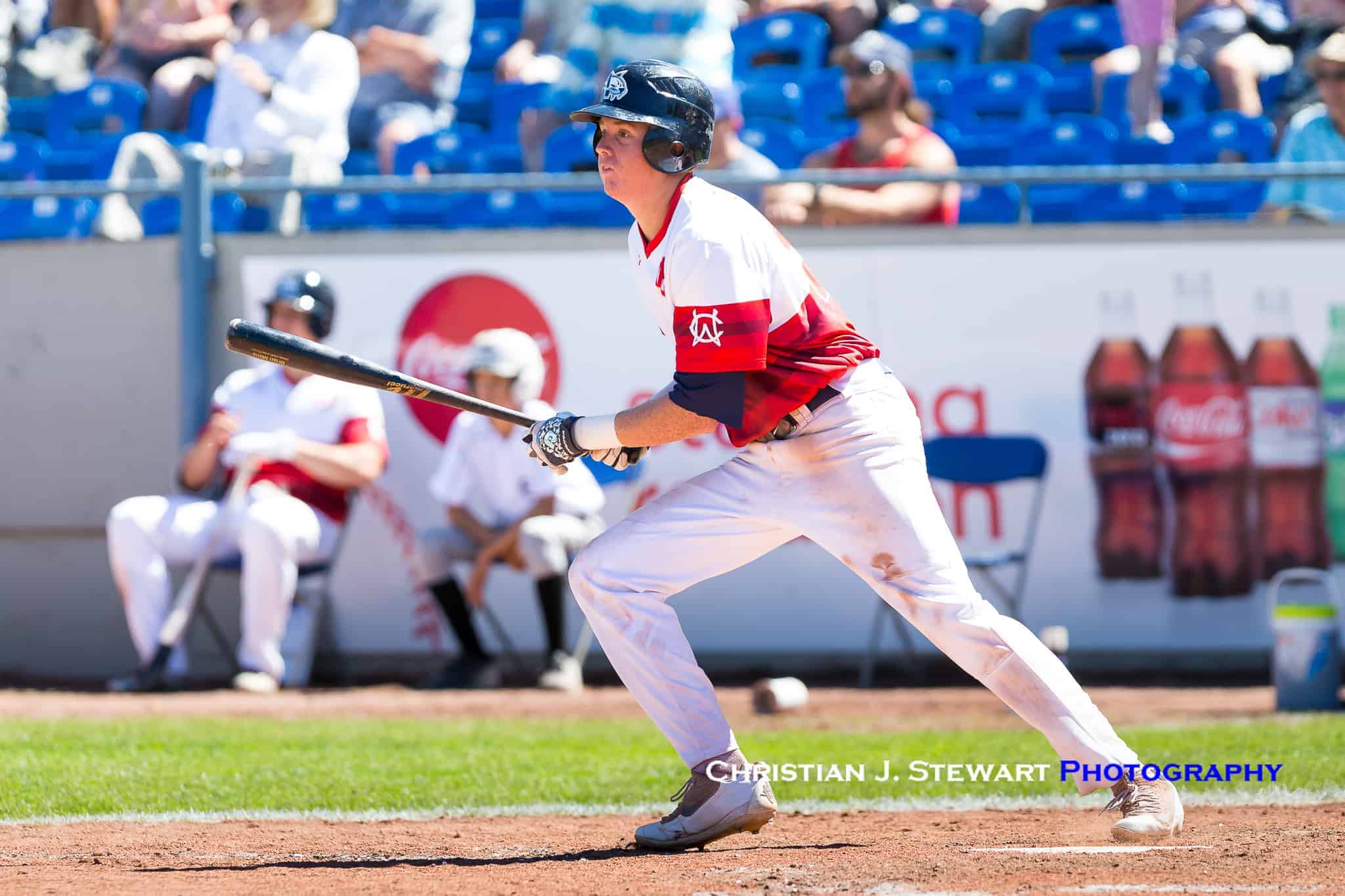 For Victoria, Hunter Vansau and Cole Weiss would each have three of the HarbourCats 14 hits, while Harry Shipley and Noah Prewett contributed a pair of hits each.  Andrew Shaps, with a single and Riley Guntrip, with a double, also chipped in a pair of RBIs each. 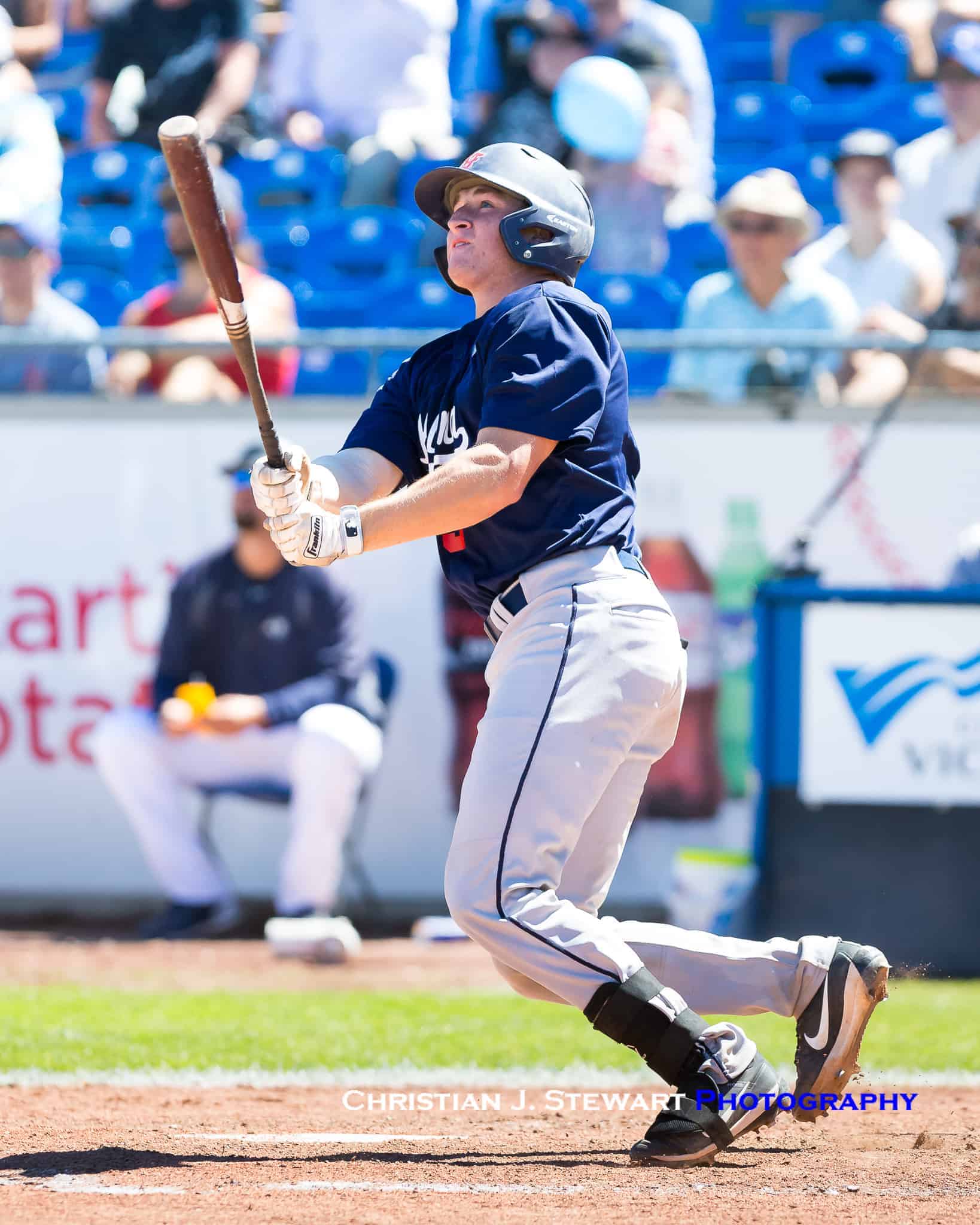 Kelowna starter Carson Dwyre would go four complete innings, giving up a pair of runs on five hits, while striking out one.  Reliever Ryan Smith would get touched for four runs and six hits in his 2.2 innings of work, while Jake Roes, with 1.1 innings of one-hit, one-run relief would get credit for the win. 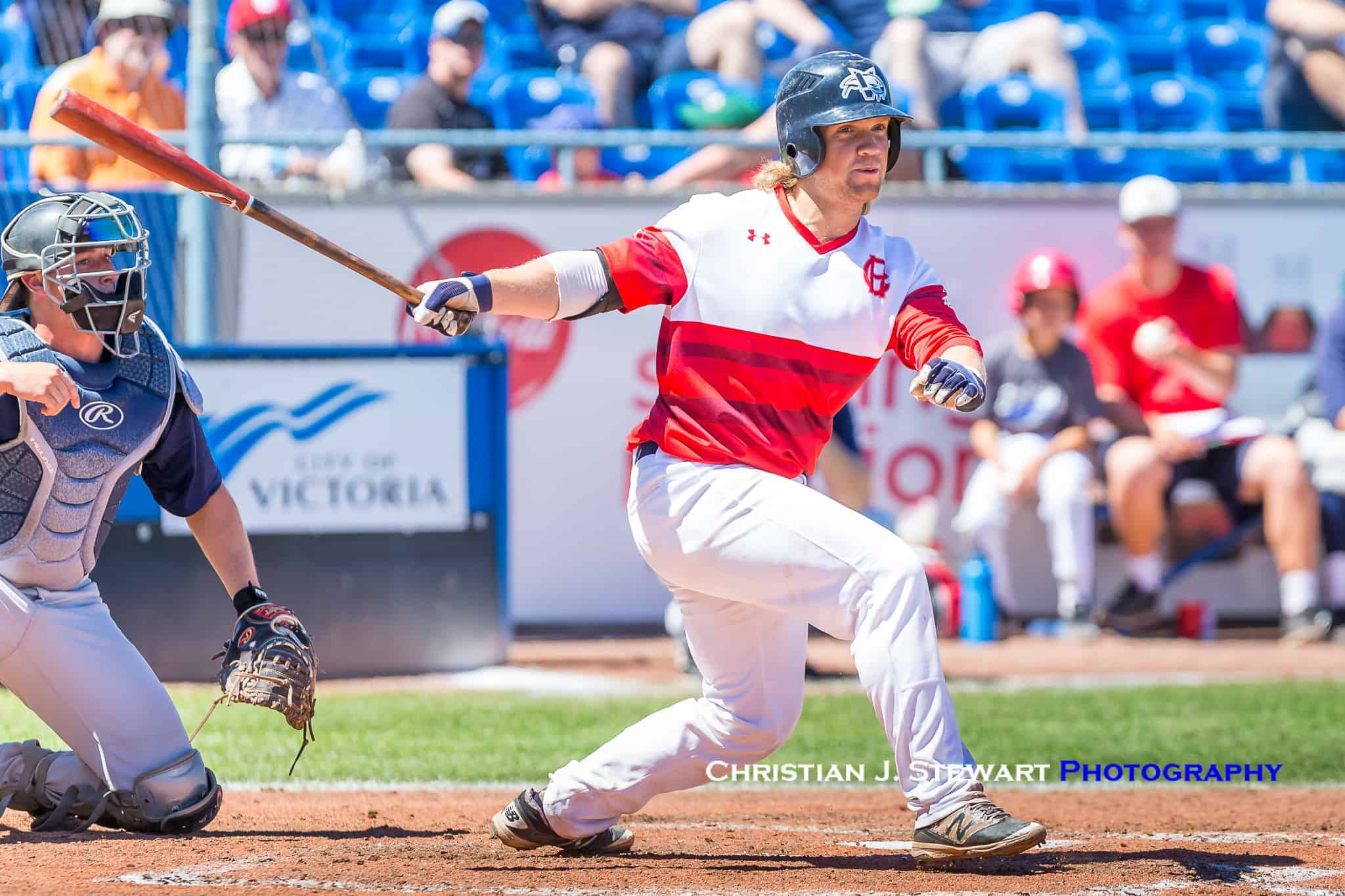 A Riley Guntrip 2-RBI double in the bottom of the seventh put Victoria ahead 6-5 (Photo: Christian J. Stewart)

For Victoria, Prokopis goes 5.2 innings, allowing five runs on eight hits, while walking one and striking out three.  Garinder Sarana made an impressive HarbourCats debut, striking out four batters in 1.1 innings of work, while Kuhn, who gave up the three runs on two hits, gets tagged with the loss.

With the loss, a critical one in a tight North Division pennant race, the now 11-8 HarbourCats lead over both Bellingham and Wenatchee, who both play later tonight, falls to just a single game. 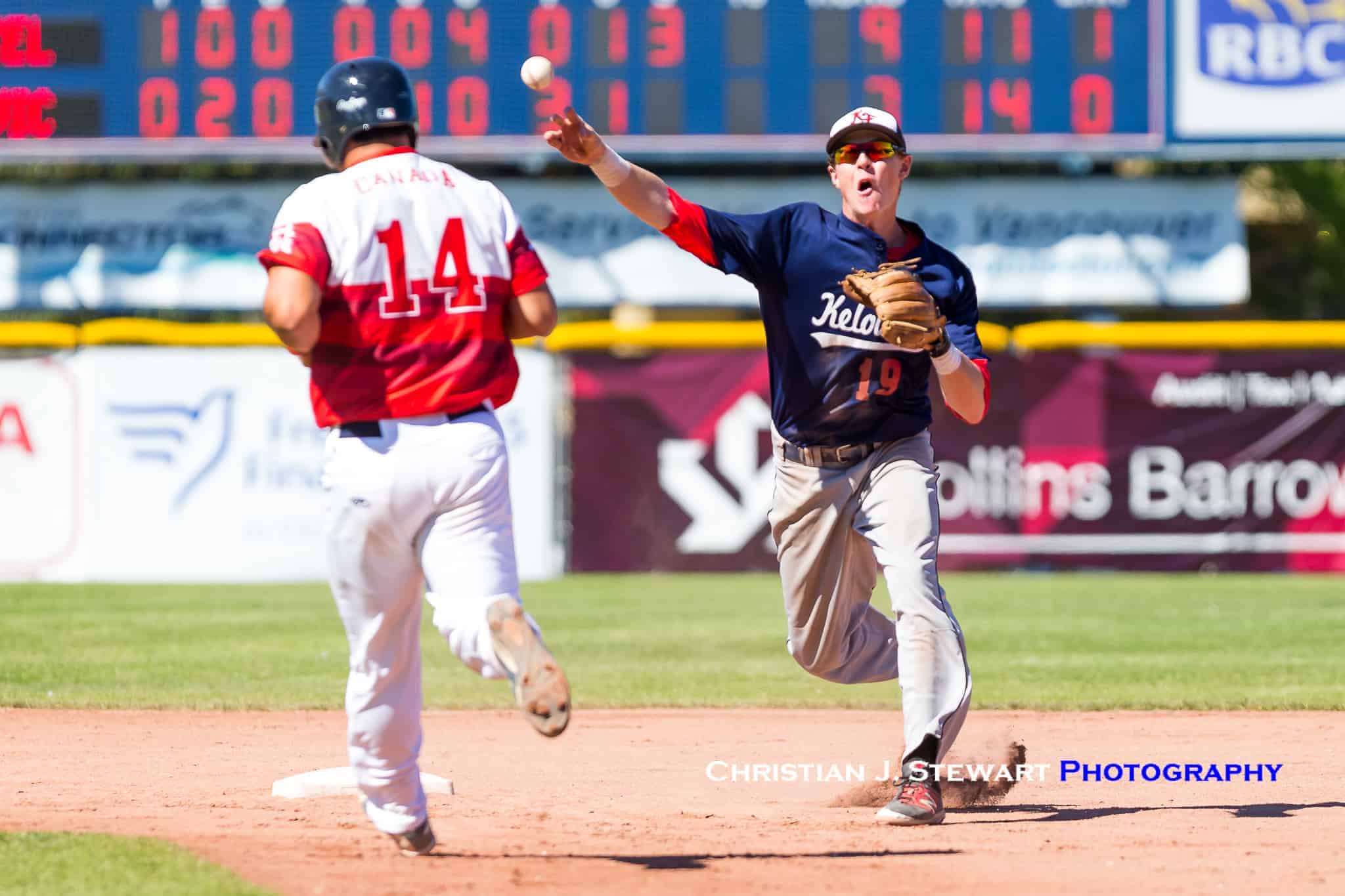 This double-play by Kelowna’s Taylor Wright in the bottom of the ninth inning, snuffed out any hope of a Victoria comeback (Photo: Christian J. Stewart)

Victoria now hits the road for a crucial three game series with the South Division leading Cowlitz Black Bears (12-5, 23-21 overall) before returning home on Monday July 31st to begin what may be an even more critical series with the Bellingham Bells.

Game Notes:  Today was the final game for HarbourCats pitcher Claire Eccles who will be leaving to join the Canadian National Women’s team. One lucky fan received the jersey off her back at the end of the game in a special promotion.  Eccles finished her HarbourCats season with seven League appearances, winning once, giving up 15 runs on 16 hits, with 4 walks and 2 strikeouts.