Charles B. Walker Stadium at Lents Park, Portland, OR (3 games)

Following a sweep of the Bend Elks that propelled the Victoria HarbourCats (9-5) to a first place tie atop the WCL North division, Victoria will hit the road for a four-game road trip in Yakima and Portland. Victoria split two games in Yakima last week, and will conclude the series tonight in central Washington. The Pippins came into the series against the HarbourCats at 5-1, but have dropped five of their past eight games to fall a game behind Victoria in the division standings.

The final three games of the trip will be contested in the City of Roses, Portland, Oregon. The Pickles had a phenomenal inaugural season in the WCL last year, winning the first half South division title and finishing with the best record in the league at 37-17. Pickles Head Coach Justin Barchus went on to win co-Coach of the Year with Kelowna manager Brian Donohue, but the Pickles were swept in the first round by the eventual league champion Corvallis Knights.

Last season, Victoria met Portland with a chance to sneak into the playoffs in the final home series of the year, but had their hearts broken in the season finale. The HarbourCats needed a series sweep to clinch a playoff spot, and after handily winning the first two games of the series, it seemed like the HarbourCats would advance to the playoffs for a third straight season. However, the expansion Pickles spoiled the HarbourCats postseason hopes with a 6-5 victory that sent Victoria home early in 2018.

The Pickles are off to a rocky start in 2019, however, losing nine of their first 14 games to begin this season, and find themselves a game outside the basement of the South division. 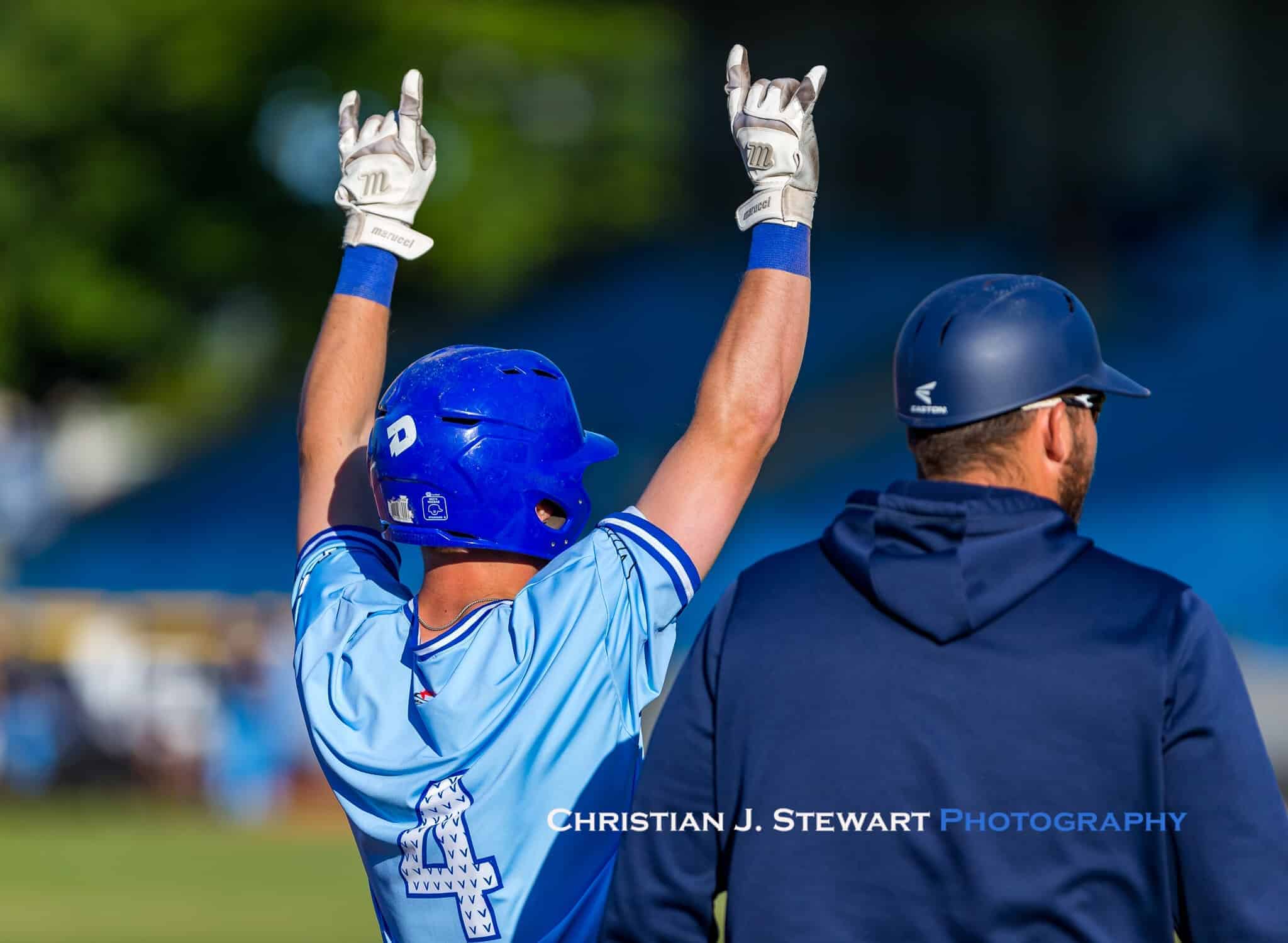 Trevor Paro throws his hands up in celebration from third base after hitting a triple in the first inning of Tuesday’s game against Bend. (Photo by Christian J. Stewart)

Victoria comes into the road trip on a roll, having won six of their past seven games and scoring 76 total runs in that span. The HarbourCats offence scored 34 runs in their final two games of the series against the Elks, and it’s been a team effort at the dish that has led this recent offensive outburst. Frankie Niemann led Victoria with eight RBI’s in the series, but Chase Wehenser added in seven RBI in the three game set and 2018 Player of the Year Nick Plaia raised his batting average by nearly 70 points in the series by collecting four hits and five RBI.

The Pickles were founding members of the Great West League in 2015, but joined the West Coast League in 2018. One year before the joined the league, it was announced that ex-Seattle Seahawks punter Jon Ryan would join the Pickles ownership group. Portland plays in historic Charles B. Walker Stadium, which was constructed in 1956, but renovated in 2016 to host the Pickles.

Kyle Manzardo (IF) — The infielder from Washington State leads the Pickles in RBI with eight, and has also shown great patience at the plate this year with 13 walks. Heading into Thursday’s games, the slugger has notched a hit in all but two of Portland’s 14 games this season.

Michael Newstrom (RHP) — Another Washington State Cougar has led the way for Portland in 2019, but this time on the mound. Newstrom has a team-high 15 strikeouts in just three starts this year, highlighted by back to back six strikeouts performances in his first two outings of the year.