Quebec’s Pierre-Olivier Dostaler is congratulated after scoring a run for Quebec in their win over Alberta Saturday afternoon (Photo: Christian J. Stewart)

The Thunder advanced directly to Sunday’s semi-final thanks to their 7-1 win over the Dodgers  in the Thunder’s final game of the round robin at Lambrick Park in Victoria. 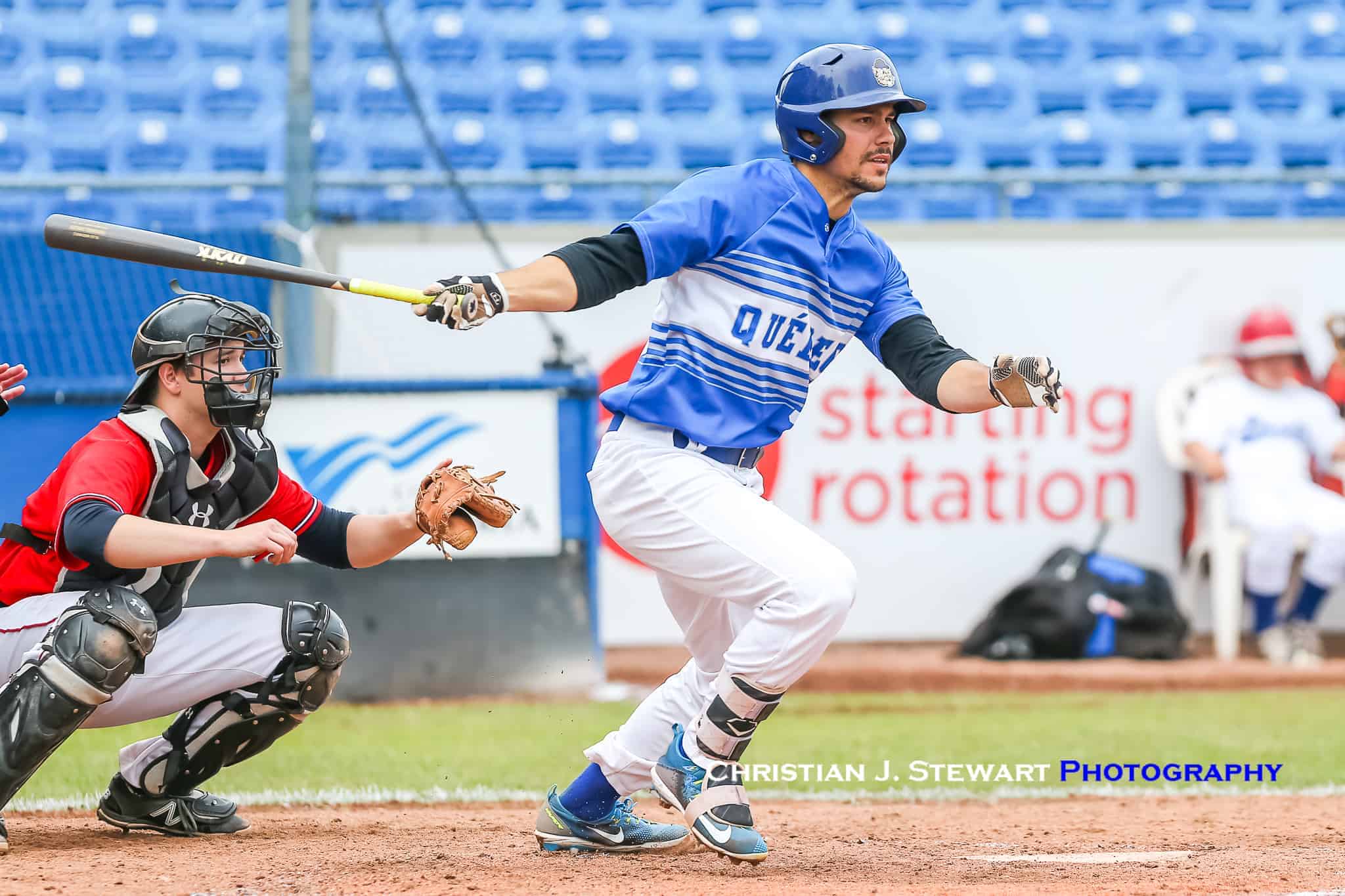 Quebec’s Emmanuel Forcier would have a hit and an RBI in the win against Alberta Saturday (Photo: Christian J. Stewart)

The win improves the Thunder’s record to 4-0 and secures first place in Pool A, while Manitoba falls to 1-2 and now needs a win against Victoria in their final game of the round robin (2:00 pm Saturday) to have  a chance to advance.  In fact, that game now becomes a “win and in” game, with the winner advancing to Saturday night’s playoff round at Wilson’s Group Stadium. 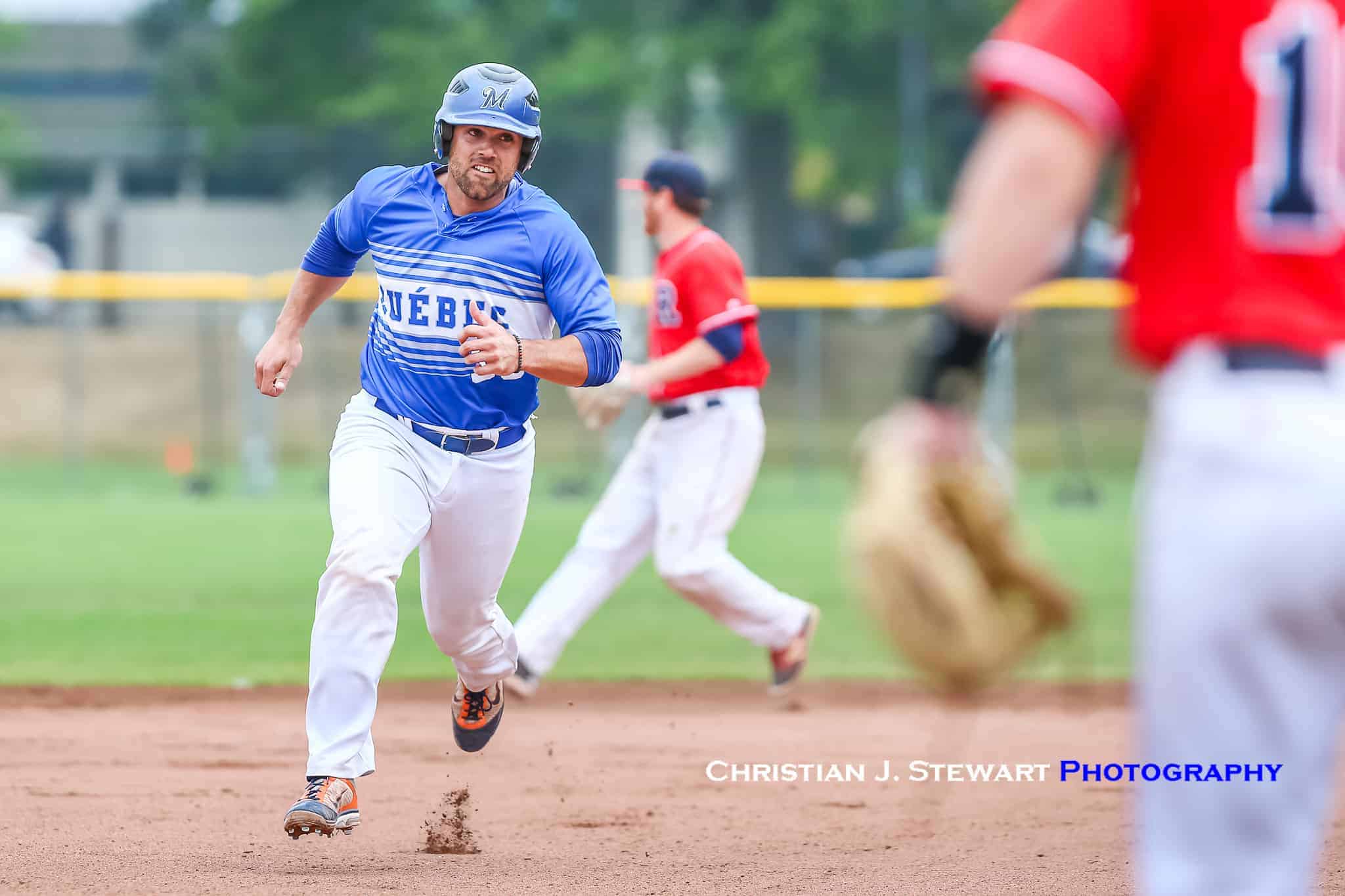 Team Quebec, by virtue of their 8-7  extra-inning win over the Riggers, moved their record to 3-1 and thereby clinched at least first or second in Pool B, pending the outcome of the British Columbia vs. Newfoundland game later Saturday.  A BC win in that game would also give BC a 3-1 record and first place in the pool thanks to their previous 8-2 win over Quebec on Friday.

New Brunswick, in second game action at Lambrick Park, advanced into the playoff round with a 3-1 win over Nova Scotia.  The win improved their record to 2-2 and gave them either second or third place in Pool A behind Ontario 2 pending the outcome of the Victoria and Manitoba game at 2:00 pm. 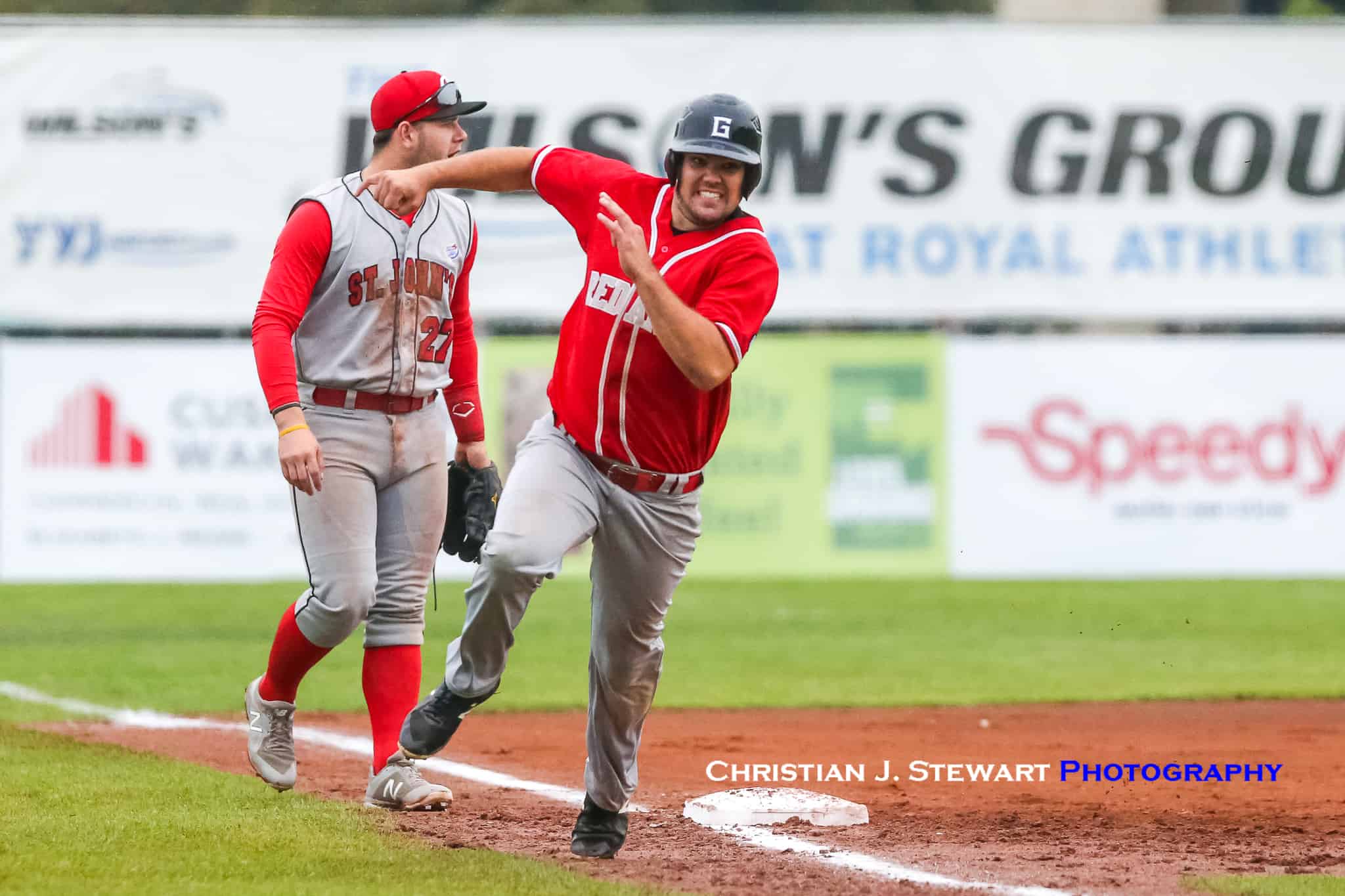 Ilderton’s Ryan Hartig heads around third base to score one of the Red Army’s 16 runs against Newfoundland Saturday morning (Photo: Christian J. Stewart)

At Lambrick Park early Saturday morning, Manitoba kept things close until the fourth inning, when the Thunder exploded for four runs, then adding another two in the fifth to put the game away.  Leading the way offensively for Tecumseh (ON1) was led by MATT SYKES, ERIC CUNNINGHAM, and CAM GODDARD, all driving in runs in the frame, with Sykes finishing with three RBI on the day. 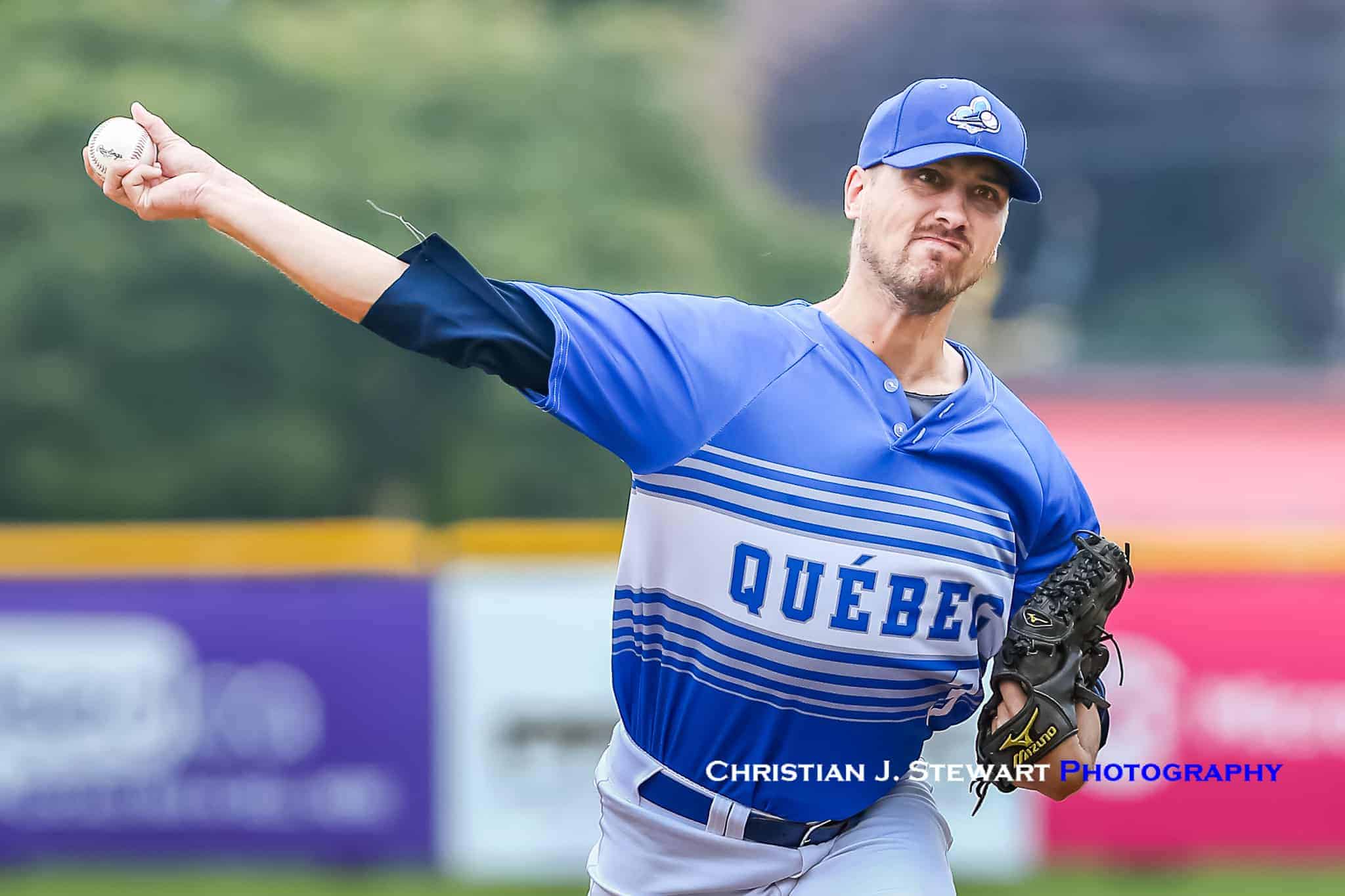 Quebec starter Mathieu Poirier would get the

CHRIS HORVATH led Tecumseh  to victory on the pitcher’s mound. He surrendered one run on five hits over six innings, striking out four. ERIC CARDUCCI threw one inning in relief out of the bullpen.

Scott Beever took the loss for Manitoba. He allowed four hits and five runs over three and two-thirds innings, striking out three.

Over at Wilsons Group Stadium, the Ilderton Red Army (Ontario 2) scored runs in each of their seven innings at bat en route to a 16-6 win over the St. John’s Capitals (Newfoundland and Labrador). 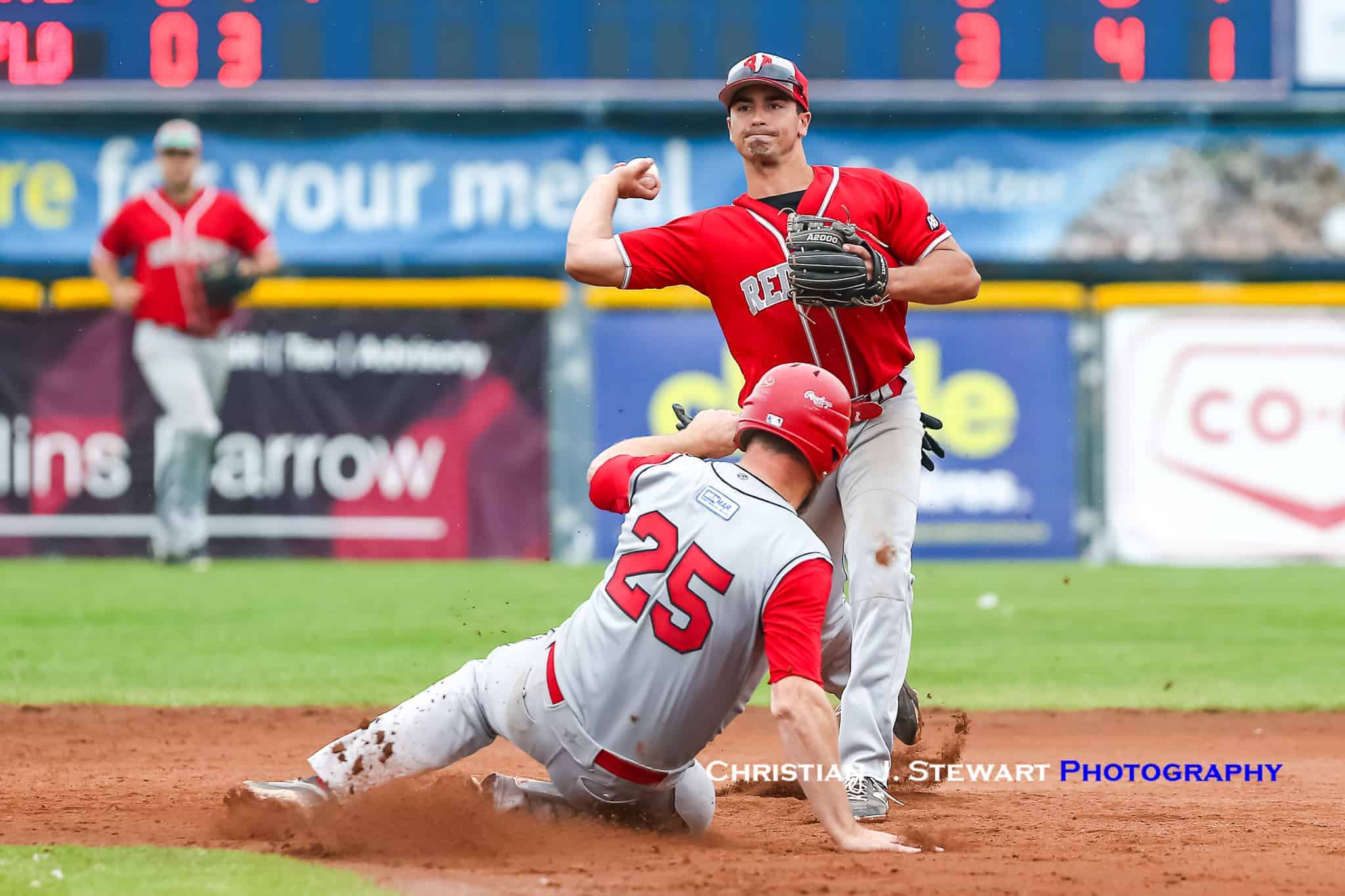 The win moves the Red Army to 2-2 for the tournament and keeps their playoff hopes alive pending the outcome of other games Saturday.  Newfoundland drops to 1-2 and must win their final game against British Columbia later Saturday to have a chance to advance.

In game two action at Wilson’s Group Stadium, Quebec held a 6-3 lead heading into the bottom of the seventh inning, but a three run homer from Alberta’s Ty Russell tied the game up to send it to extra innings. An RBI double by Quebec’s Jean Luc Blaquiere, his third hit and third RBI of the game, in the top of the ninth, then put Quebec ahead 7-6, while Fracois Lafreniere then followed with another double to score Blaquiere and increase the lead to 8-6.

Quebec reliever Mathieu Boutin  would then get the first two batters in the bottom of the inning out before allowing a single to Jason Chatwood and then a double to JP Wilner to make the score 8-7.  Jaret Chatwood would then pop out to end the game and put the 1-3 Riggers out of playoff contention

Quebec starter Matthew Poirer was excellent in the win, going 5.2 innings and allowing the two Red Deer runs on seven hits. He was relieved by Jonathan Raftus who would get Quebec out of trouble in the bottom of the sixth when Red Deer loaded the bases with two outs.

Finally in second game action at Lambrick Park, New Brunswick scored once in the first, once in the third and then added a big insurance run in the bottom of the sixth to advance into the playoff round with a 3-1 win over Nova Scotia. Nova Scotia threatened with the tying runs at second and third in the top of the seventh but could not get anything across.

Sam Lund led the way for New Brunswick with three hits, an RBI and two runs scored, while pitcher Shaun OToole earned the victory on the hill for. He went five and a third innings, allowing one run on five hits and striking out three. Colby Lyle threw one and two-thirds innings in relief out of the bullpen. Lyle recorded the last five outs to earn the save.