Victoria’s Kevin Collard would have a three-hit and two-RBI night in leading the HarbourCats to a 6-4 win over the Lefties in Port Angeles on Saturday (Photo: Christian J. Stewart)

The Victoria HarbourCats (29-24, 15-11) began a season-ending two-game series in Port Angeles against the Lefties (8-17, 18-34) on Saturday night. With the West Coast League North Division second half pennant still hanging in the balance, the HarbourCats benefitted from a big inning and outstanding bullpen work, in a 6-4 win.

Right-hander Blake Hannah (UC Davis) made his third start of the season for the HarbourCats. Port Angeles found success early, scoring a run in each of the first two innings to lead by a pair. 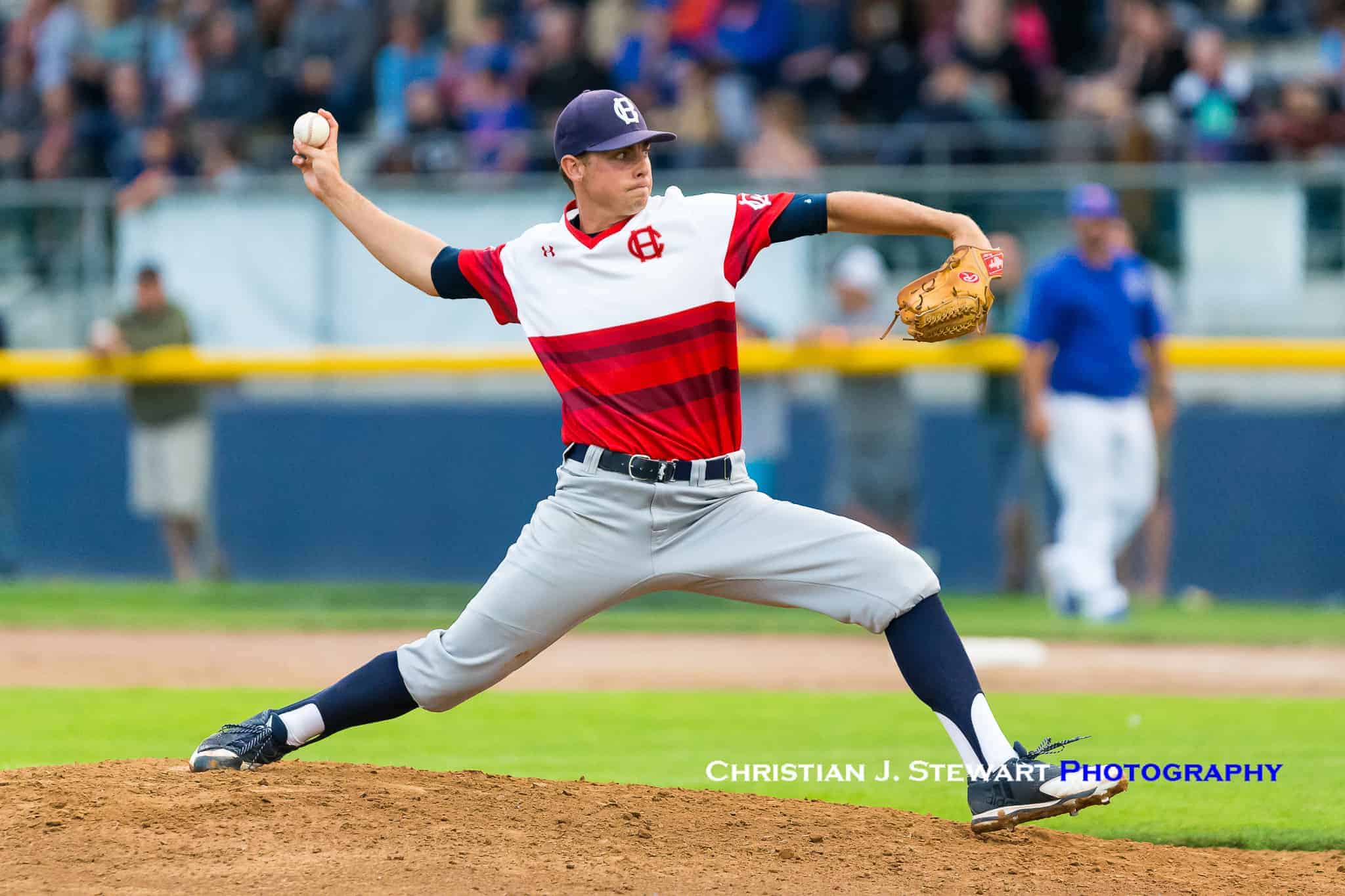 Victoria’s Blake Hannah started Saturday and made it through four innings of the win over Port Angeles (Photo: Christian J. Stewart)

The HarbourCats took the lead with a four-run third inning, highlighted by a two-run double by left-fielder Kevin Collard (San Diego), but Port Angeles responded with two runs in the bottom of the inning, tying the game at four.

Right-fielder Hunter Vansau (Mississippi State) regained the lead for Victoria with a sacrifice fly in the fourth, scoring DJ Porter (Cal Baptist) who had reached on a leadoff double. 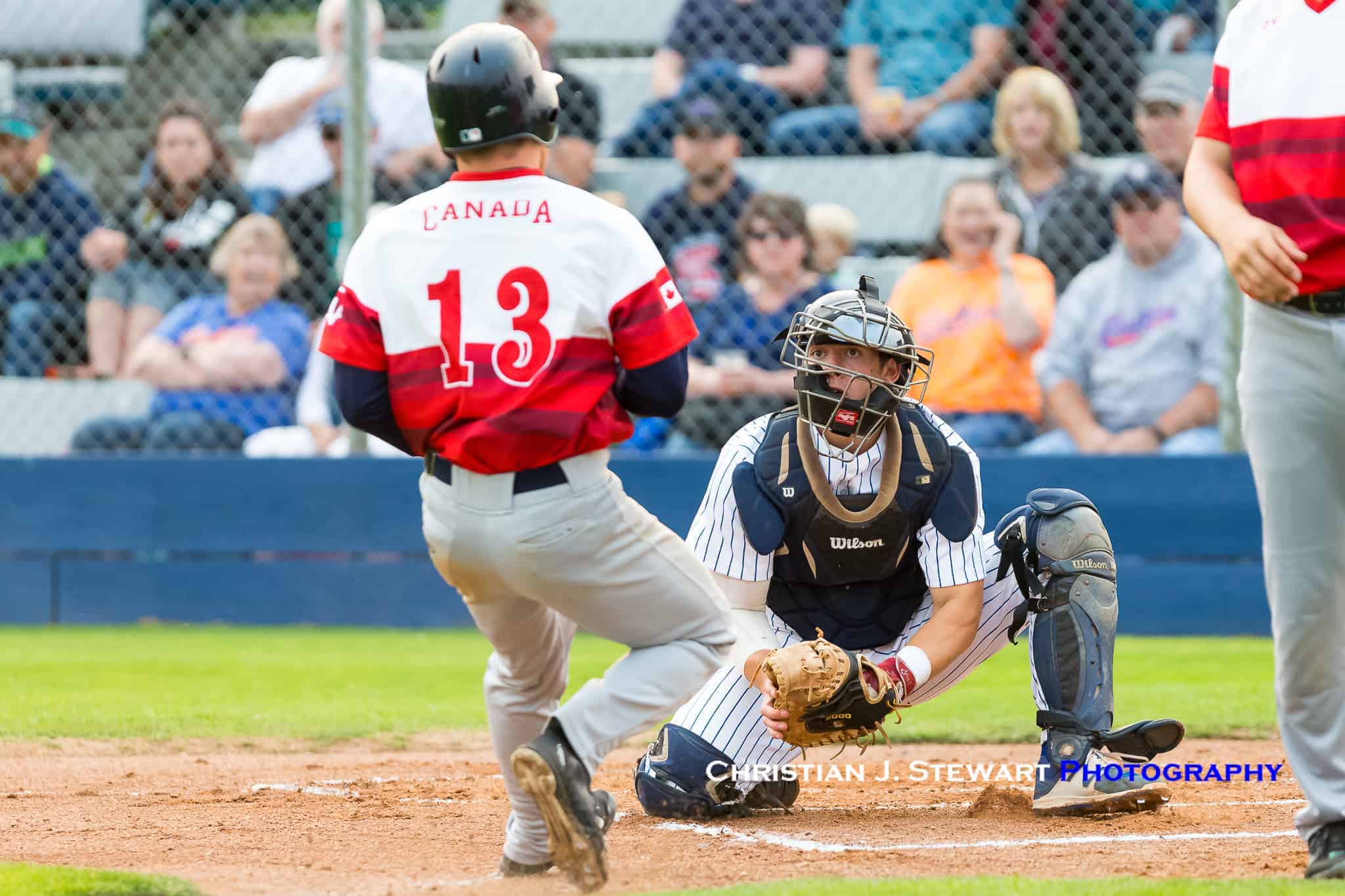 Victoria base runner Harry Shipley is a dead duck at home plate at Lefties catcher Benny Kaleiwahea waits with plenty of time to apply the tag during the first inning Saturday (Photo: Christian J. Stewart)

From there, the HarbourCats received five scoreless innings from five different relievers, including ultimate game winner Taylor Prokopis, on the way to the 6-4 victory.

Andrew Shaps (Chico State) drove in a run on an eighth inning single for the insurance run.

The win, combined with a Wenatchee win on Saturday night, means that the HarbourCats lead the AppleSox by a half game entering play on Sunday. Victoria must finish a game ahead of Wenatchee, as they do not own the tiebreaker. 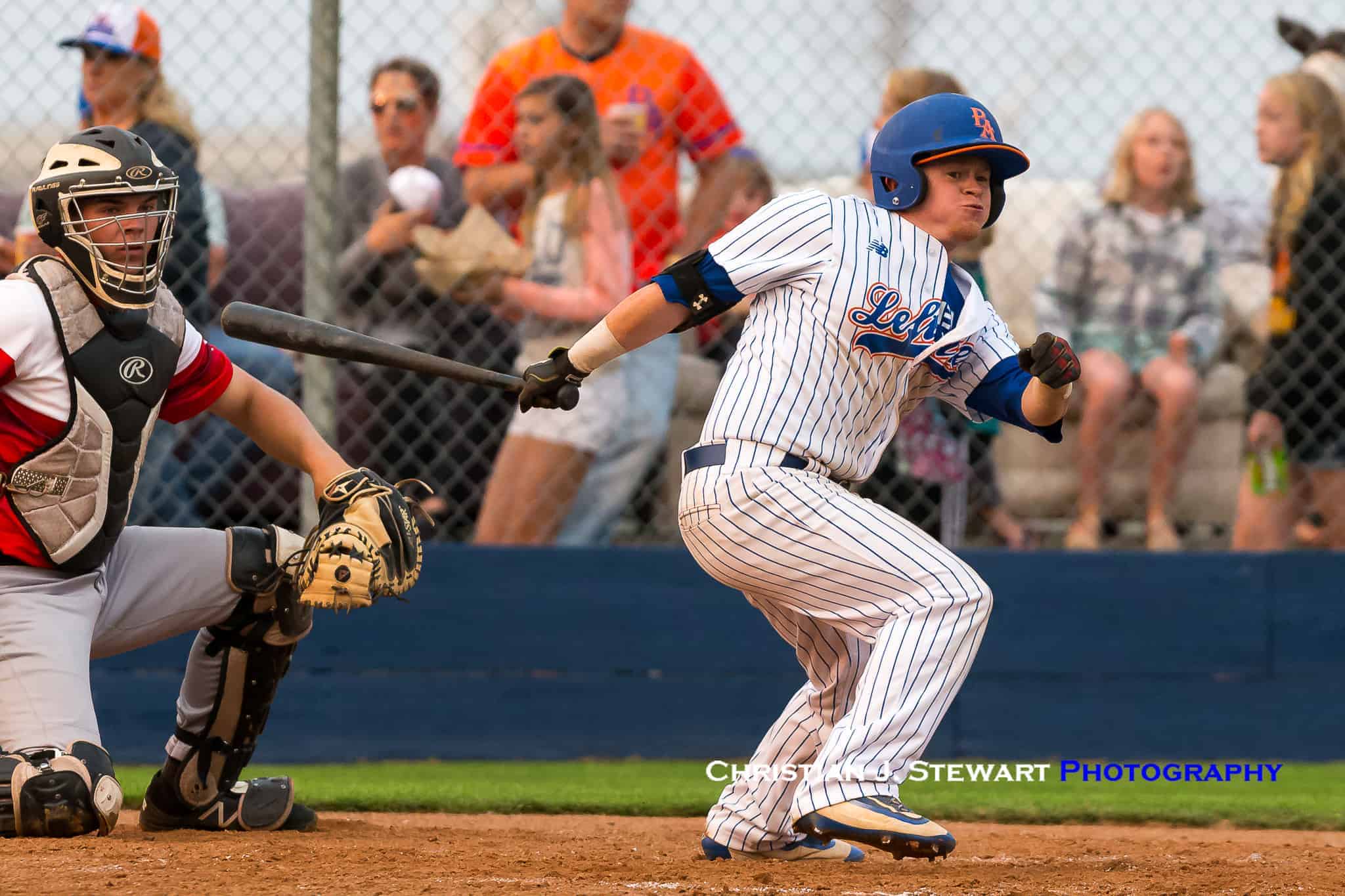 This means that if the HarbourCats win on Sunday, OR Wenatchee loses, then the AppleSox would need to play a makeup game against Corvallis on Monday.

If Victoria wins AND the AppleSox lose, then the HarbourCats would win the WCL North second half pennant.

If the HarbourCats lose AND Wenatchee wins, then the AppleSox would win the WCL North second half pennant.

The HarbourCats and Lefties conclude the regular season Sunday afternoon at 1:05 at Civic Field. 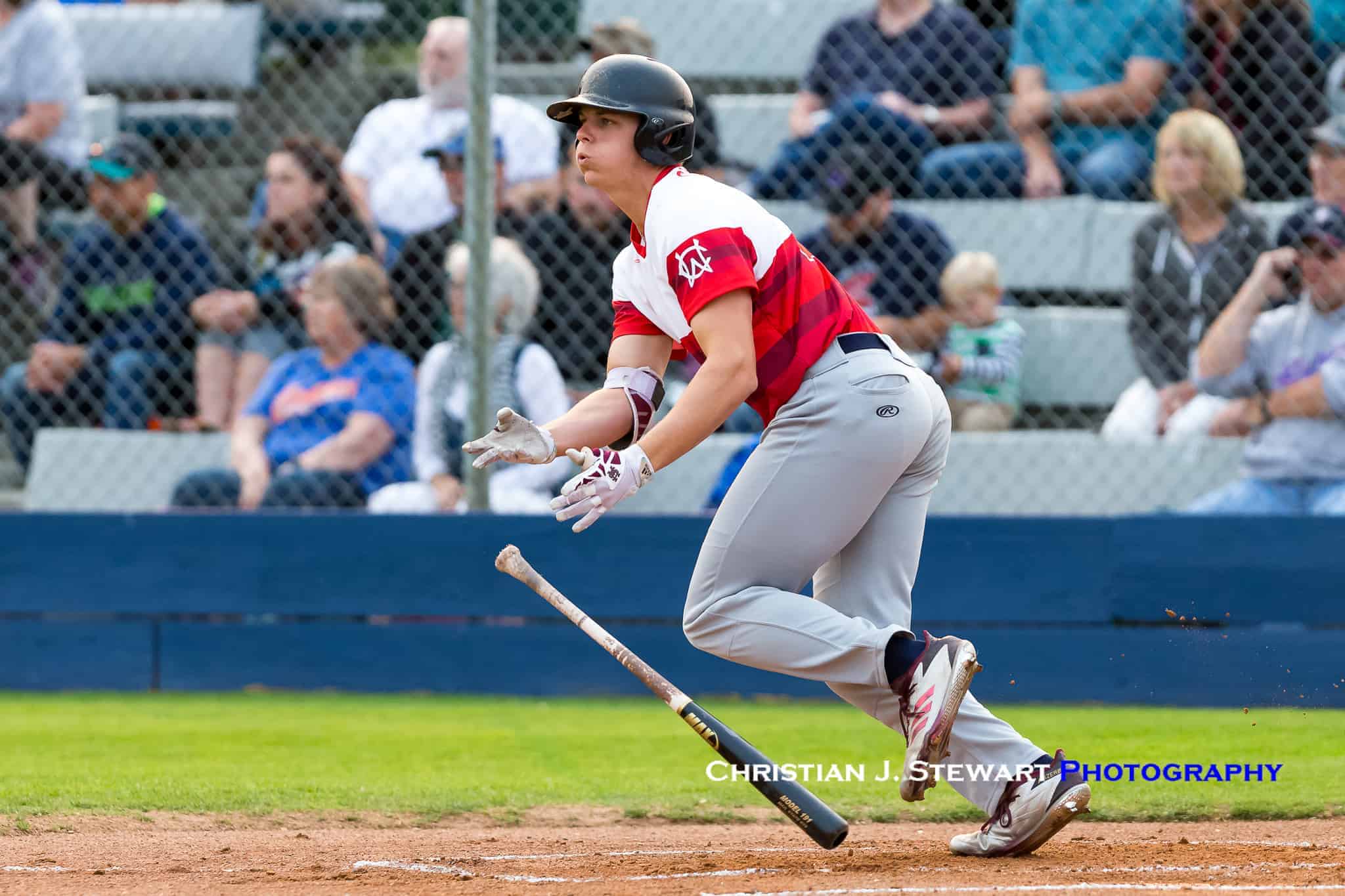 Hunter Vansau was one of five HarbourCats with multi-hit evenings on Saturday in the win over Port Angeles (Photo: Christian J. Stewart)

Tickets sales plans are in place in preparation for a possible playoff game in Victoria.

If the HarbourCats qualify for the playoffs, they would host game one at Royal Athletic Park on Tuesday, August 8 at 6:35pm.

Tickets would be made available online through Ticket Rocket, should the HarbourCats clinch their playoff berth.

Further updates will be provided. 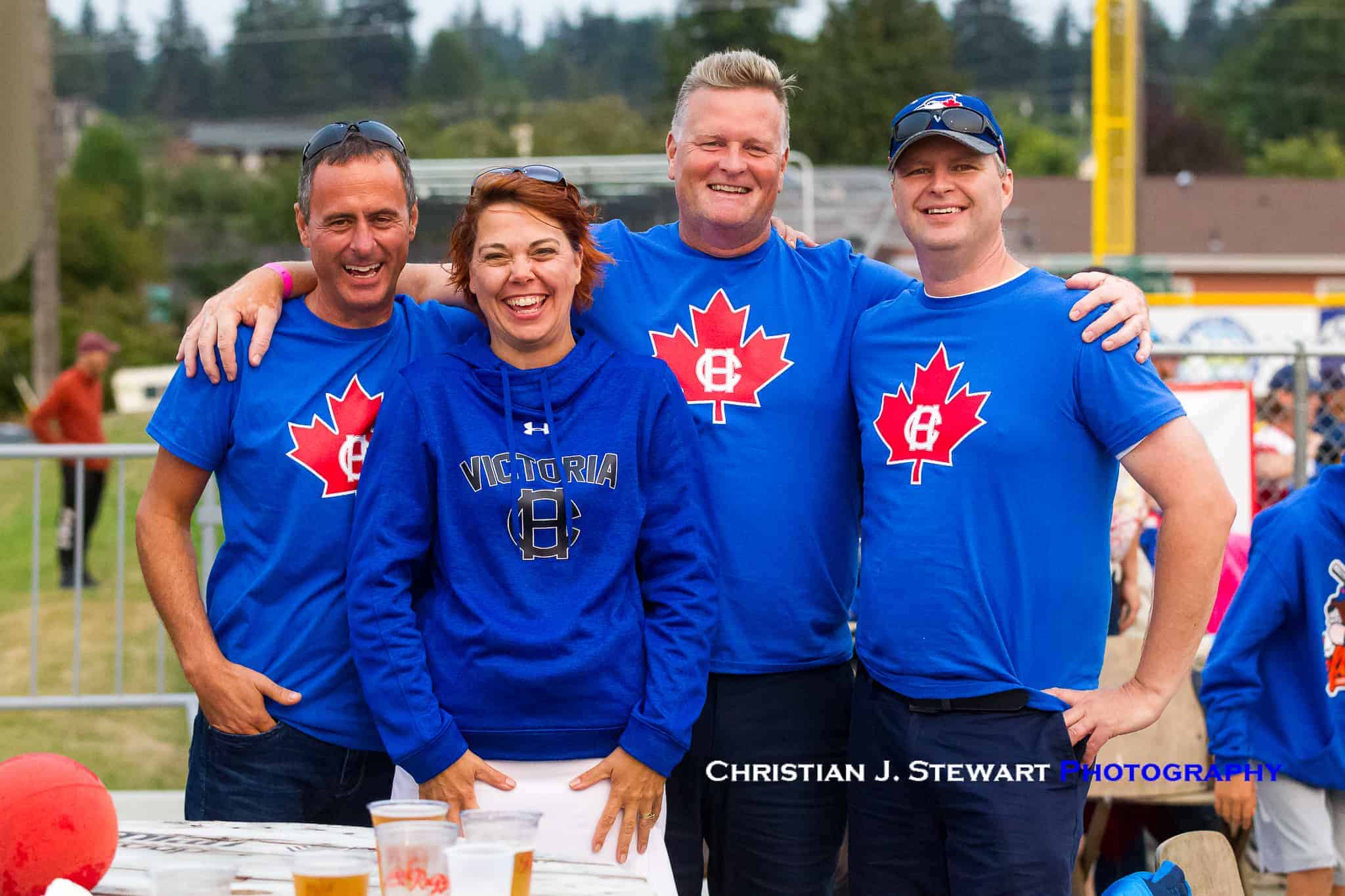 The HarbourCats were buoyed Saturday by a strong fan base that made the trip from Victoria to come and watch the game (Photo: Christian J. Stewart)

2018 season tickets will go on sale in July including the highly popular Campbell Real Estate Club. Tentative plans are in the works to expand the new home plate seating section from two to four rows of padded seating.

Waiting lists will be taken for season tickets in the Diamond Club seats. 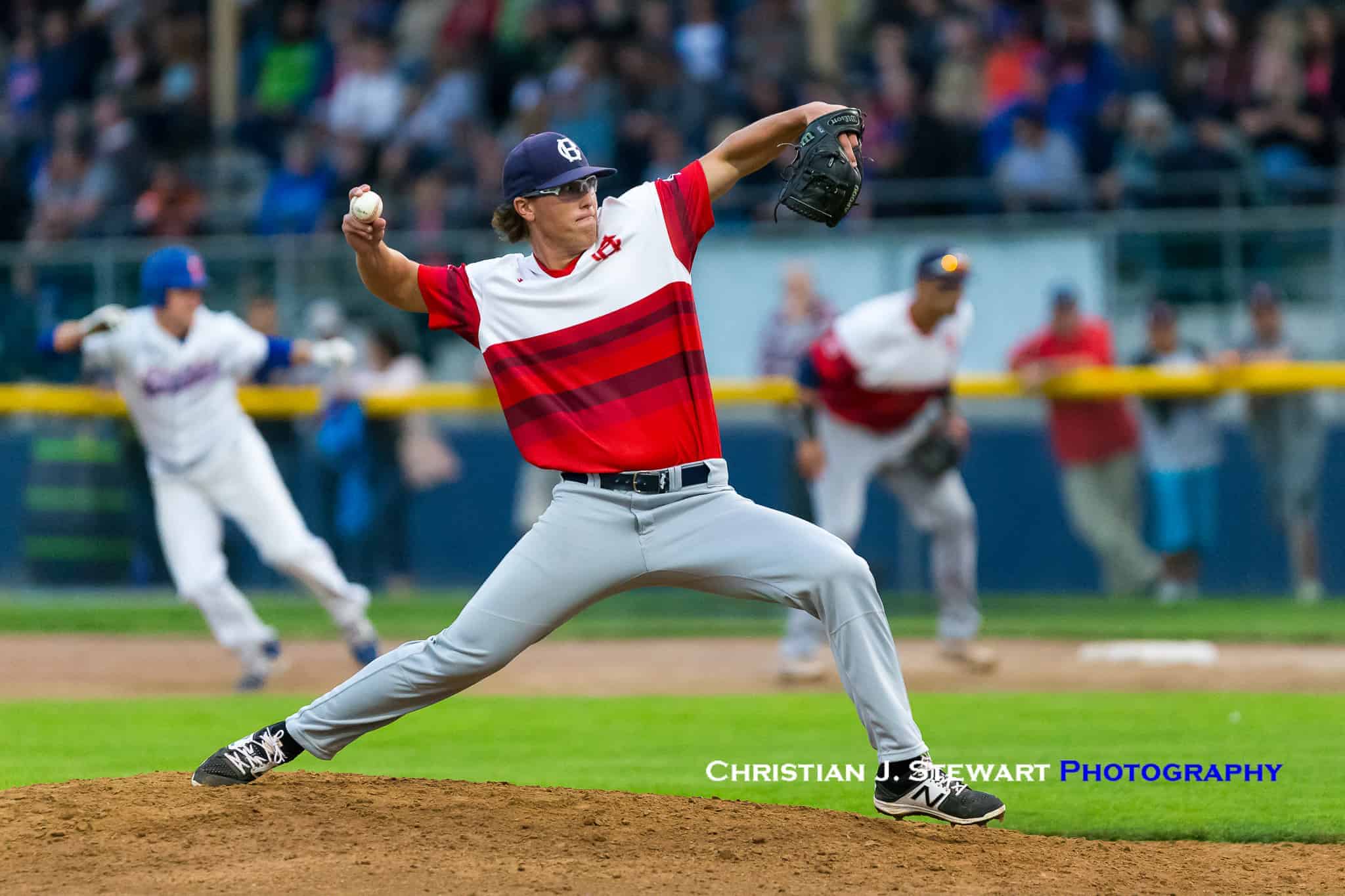 Taylor Prokopis was one of five Victoria relievers to keep the Lefties off the board on Saturday. He would get credit for the 6-4 win (Photo: Christian J. Stewart)