Above: A packed Serauxmen Stadium enjoys an exhibition game between the Nanaimo Selects and Victoria HarbourCats in 2018 (Photo: Greg Sakaki, Nanaimo News Bulletin).

Victoria HarbourCats to have Island Rival, as expansion team added

The summer collegiate baseball league, which currently has 12 teams including Canadian entries in Victoria and Kelowna, will see Nanaimo become the 13th WCL team when the to-be-named club starts calling Serauxmen Stadium home beginning in June of 2021.

The team will be owned by the same company that has successfully operated the Victoria HarbourCats at Wilson’s Group Stadium at Royal Athletic Park in Victoria. That group took over the team, which debuted in the WCL in 2013, in the late spring of 2015, with ownership including John Wilson (of Wilson’s Transportation), Richard Harder, and brothers Ken and Jim Swanson. Jim Swanson is the Managing Partner and will oversee operations in both Nanaimo and Victoria.

“This is an exciting day for us all. This has been in the works for a few years and it’s going to be a great new addition to the Nanaimo sports scene,” said John Wilson, the team’s Vice-President/Business, whose Wilson’s Group of Companies has operations based in both Nanaimo and Victoria, serving the entire Island.

“The successful program that has been built in Victoria will now have an Island rival, to go along with the other natural rivalries already in place with, in particular, Port Angeles, Kelowna and Bellingham. Fans from Mid-Island area know we’ve had many Island players, remembering the stellar play of Griffin Andreychuk, Adam McKillican, Alex Rogers, Garrett Goodall and others, and the level of baseball will be the highest Nanaimo has ever seen.” 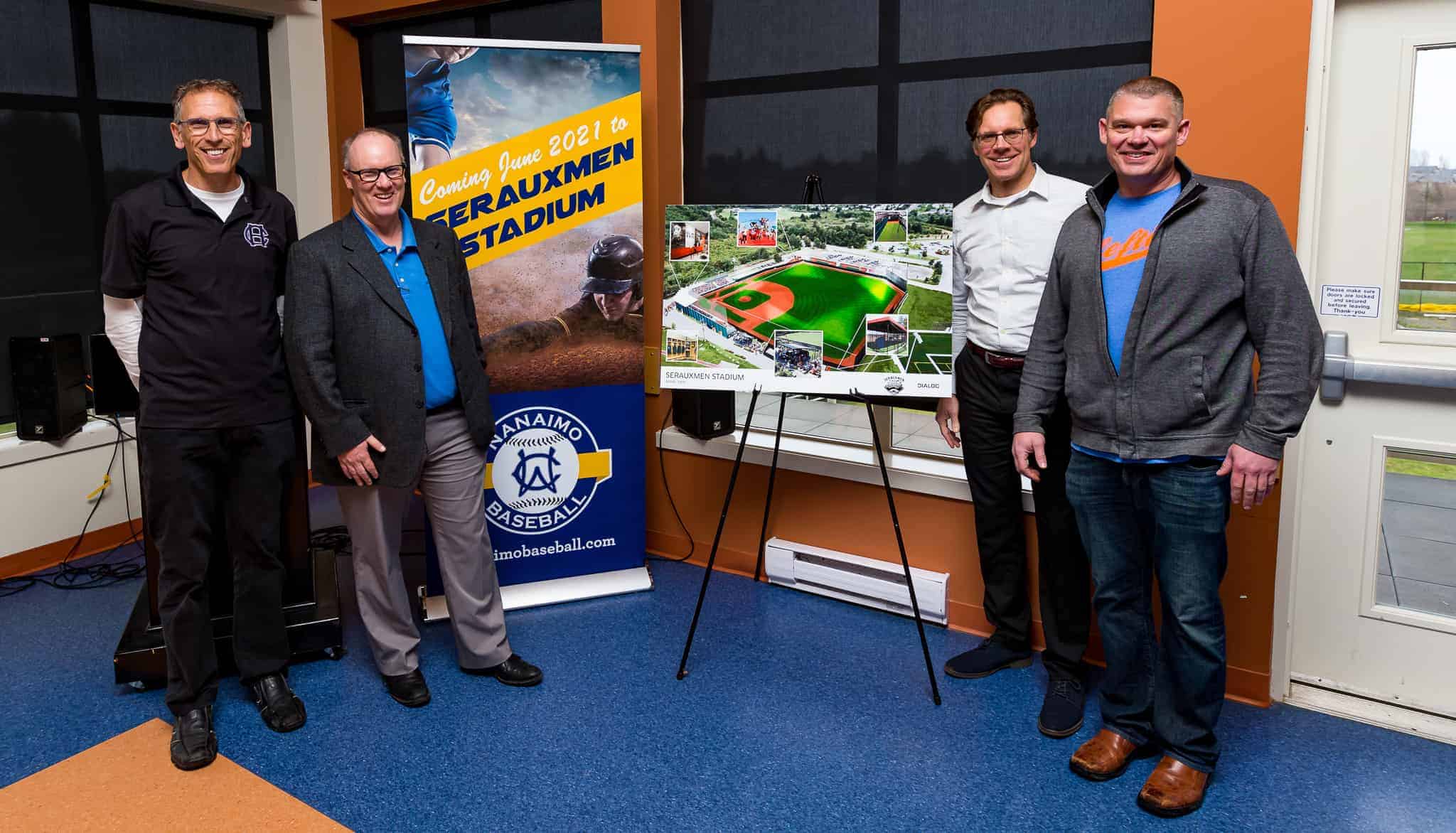 Without the involvement of all baseball stakeholders in Nanaimo, and the City of Nanaimo, this day does not come to pass. The City is installing lighting at historic Serauxmen Stadium starting this month, which will benefit all groups – the Nanaimo Minor Baseball Association, the Coal Miners senior program, the Pirates of the BC Premier Baseball League, the VIU Mariners team, and of course the new Nanaimo WCL Baseball Club. City Council has played a significant role in making this a reality, and further improvements to Serauxmen Stadium will be rolled out and will be exciting developments for fans and users of the facility.

“What a fantastic addition to the Third Street sports zone,” said Leonard Krog, Mayor of the City of Nanaimo. “We are pleased to see this partnership grow and welcome the team and the WCL to iconic Serauxmen Stadium.”

The Nanaimo WCL team will play 27 regular season games plus additional non-league and, hopefully, playoff games. In the summer of 2019, the HarbourCats played 35 home games at Wilson’s Group Stadium at RAP.

The Nanaimo WCL team today is unveiling a website that will include easy links to a Name-The-Team Contest, and ways to get in line for best choice of seats for Season Tickets, or for placements with corporate advertising. That website is nanaimobaseball.com. The team will have an office set up beginning in September, but will be working closely with the community throughout the spring and summer. There are options for season ticket commitments up to three years, reducing the price at multiple years, and interested parties will be contacted in the order they submit information. Seat selection will be handled in order of paid commitments.

The Nanaimo WCL baseball club is setting a cap on season tickets at 550, to allow some seats to be available on a game-by-game basis. Corporate partnership opportunities will be handled in the same priority submission basis.

“We have so many people to thank, beginning with members of council currently and even dating back three-plus years, and the entire board that has led the transformation of Serauxmen Stadium, led by Lorne Goodall and Dan Rogers,” said Jim Swanson. “Mike Holyk and minor baseball, the people with the Coal Miners, and the leadership of VIU and the Pirates have all been excited to see this moving ahead. We look forward to great ideas from people in Nanaimo on what to name the team, and to having people select the seats they want for 2021 and beyond. As a group, we’d love nothing more than to see Nanaimo’s WCL team and the HarbourCats meet in the playoffs.”

The West Coast League, played with wood bats, includes teams in B.C., Washington and Oregon – Victoria, Nanaimo and Kelowna in Canada, along with Washington-based clubs Wenatchee, Port Angeles, Bellingham, Yakima, Walla Walla, Cowlitz and Ridgefield. The Oregon teams are in Corvallis, Bend and Portland. Teams play a pro-style 54-game regular season schedule, with three-game series, plus non-league/exhibition and playoff games, and literally hundreds of drafted and professional players have come through the league, which has existed back to 2005 under the WCL banner.

Season Tickets, 10-Game Flex-Packs and Single Game tickets are now on sale for the 2020 season. Visit the office at 101-1814 Vancouver Street or call 778-265-0327 to order. Single game tickets, with our new pick your own seat functionality, can also be purchased on-line at www.harbourcats.com/tickets or at SelectYourTickets.com

About The Victoria HarbourCats

The HarbourCats are Victoria’s entry in the West Coast League (WCL), a summer, collegiate, wood bat baseball league, featuring the top college-age players from across North America and the world. One of the elite teams in the league, the HarbourCats won a record 40 games in 2016 and followed that up in 2017 and 2019 as the WCL’s North Division Playoff Champions, coming one game short both times of their first ever WCL Championship.  In 2020, their eighth season, the team will play a 54-game regular season schedule, with 27 of those games and five additional non-league games, being played at historic Wilson’s Group Stadium at Royal Athletic Park in Victoria. Games begin May 30, 2020 with games scheduled through mid-August.   See www.harbourcats.com for more details.