Coquitlam’s Grant Malm had a big day at the plate with two home runs and 5 RBI in the Angels 8-2 win over Quebec on Friday morning (Photo: Christian J. Stewart)

August 24, 2018, Victoria, BC – Grant Malm had a day to remember Friday morning, hitting two home runs and cashing in five RBI to lead the Coquitlam Angels (Team BC) to a 8-2 win over Team Quebec in Day 2 Action at the 2018 Baseball Canada Men’s National Championships at Wilson’s Group Stadium at Royal Athletic Park in Victoria. 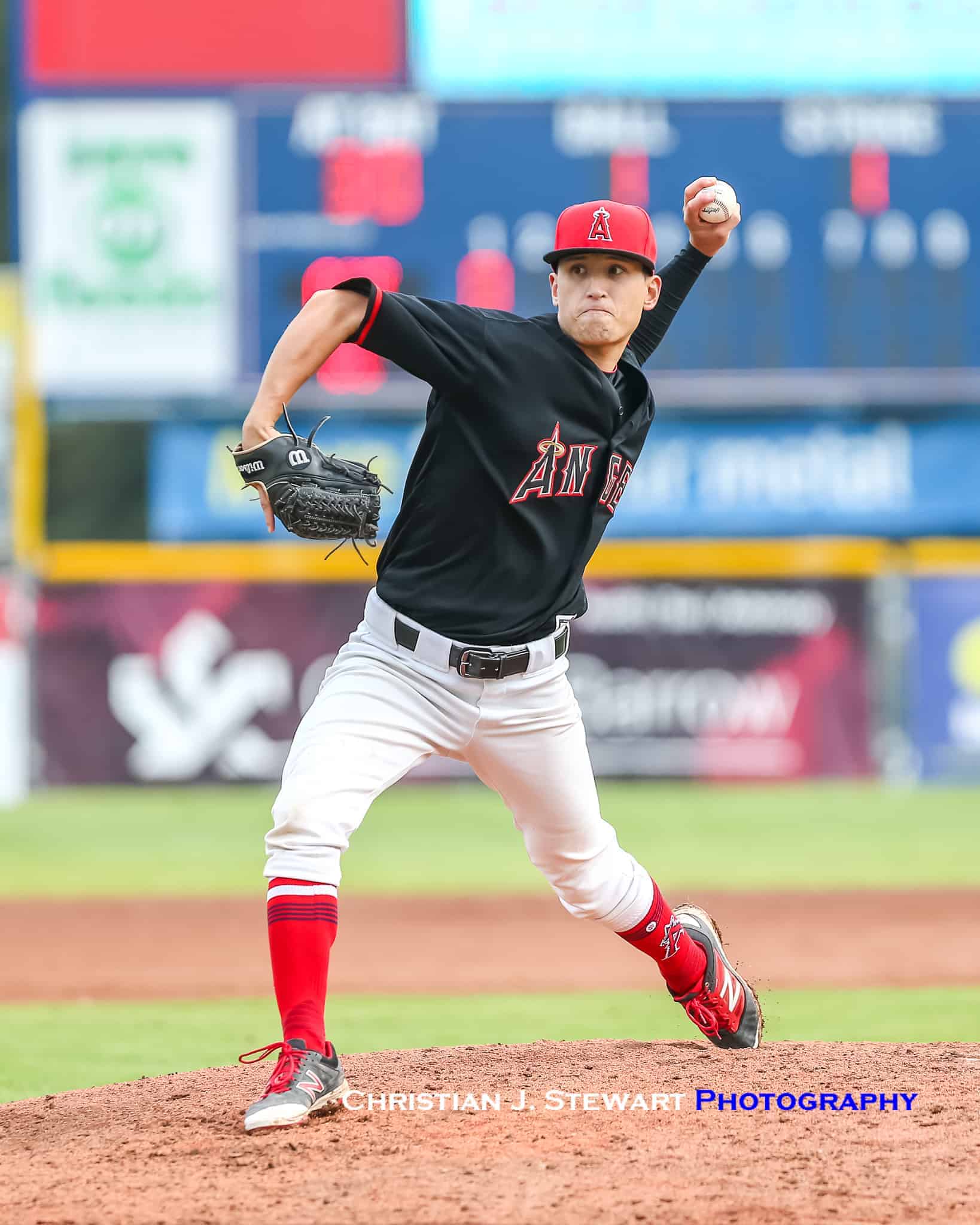 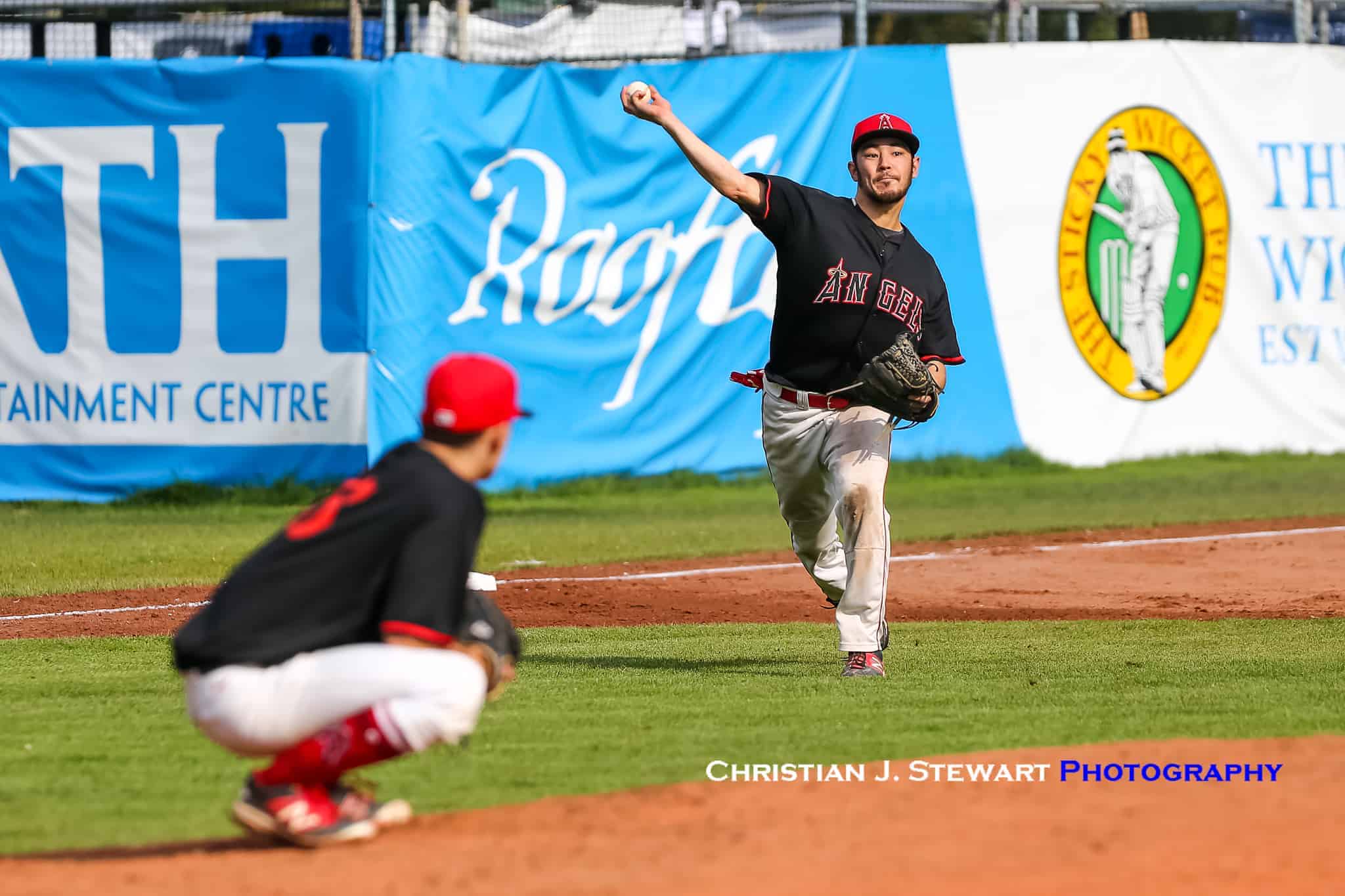 Scott Tulloch also got in on the home run action for the Angels with a solo shot in the four-run fifth, while Kyle Iwata and Alex Graham contributed RBI to the win.  Quebec’s runs came on a solo home run in the fourth from Cedric Valleries and and an RBI single by Francois Lafreniere.

Sean Callegari got the start for Team BC and picked up the win, going 4.2 innings and allowing just the one Quebec run on three hits while striking out four. Braeden Allemann provided solid relief, getting the Angels out of a possible game tying jam by Quebec in the top of the fourth and then finishing out the game allowing another Quebec run in the top of the sixth, but no further damage after that. 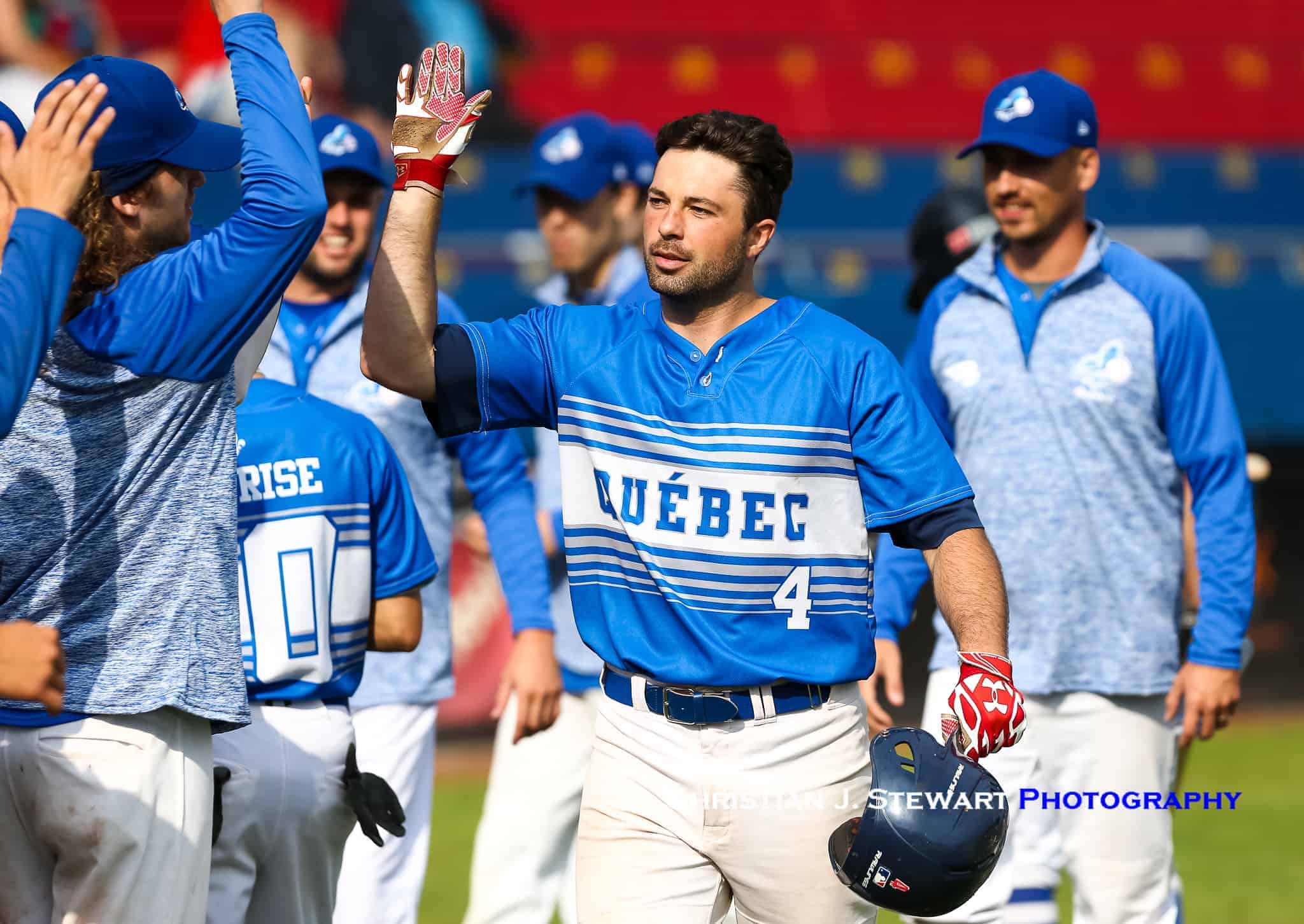 Quebec’s Cedric Valleries (4) would put his team on the board with a solo home run in the fourth (Photo: Christian J. Stewart) 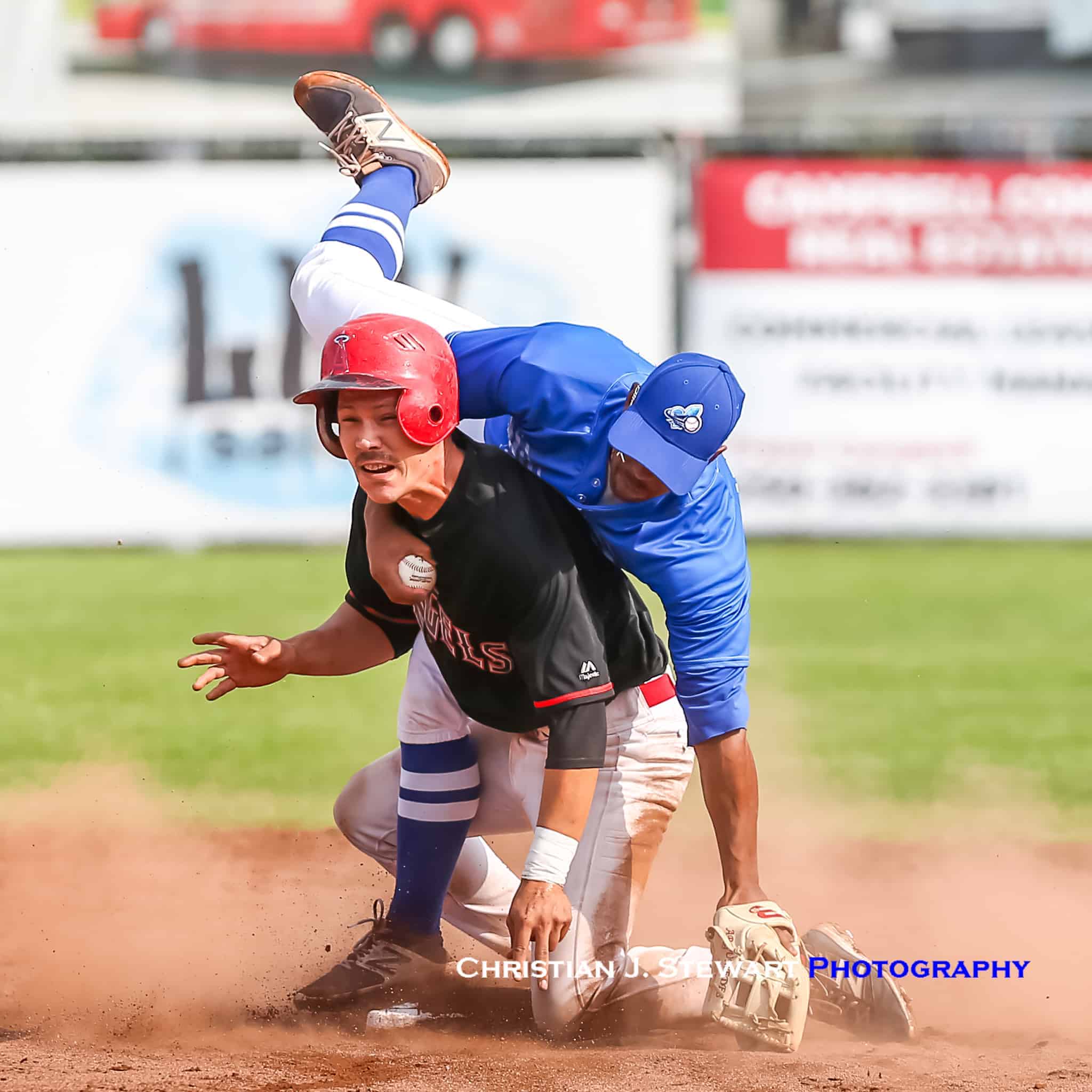 Team BC Andrew Graham creates a little bit of chaos at second during a double play opportunity by Quebec (Photo: Christian J. Stewart) 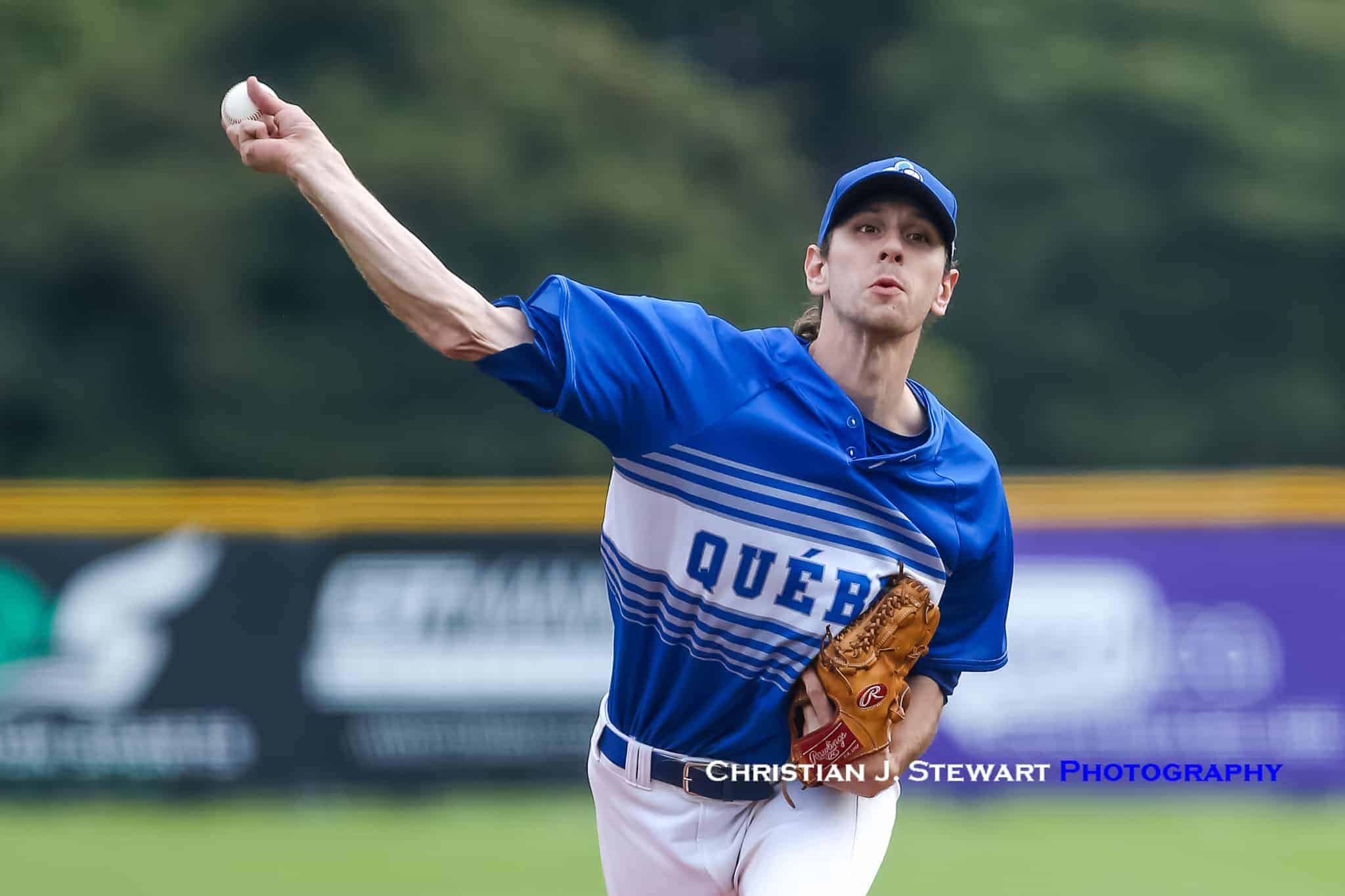 Quebec’s Jonathan Paget took the los against BC, going five full innings and surrendering all seven BC runs on 11 hits, while striking out three (Photo: Christian J. Stewart).

Quebec’s Jonathan Paget took the loss, going five full innings and surrendering all seven BC runs on 11 hits, while striking out three.

The win improves Team BC’s record to 2-0 while Quebec falls to 2-1.  Team BC faces Ontario 2 (Ilderton Red Army) later Friday at 3:00 PM at Wilson’s Group Stadium, while Team Quebec closes out their round robin Friday morning with an 11:00 am start against Team Alberta (Red Deer Riggers).