Victoria’s Liam Goodall would have three hits in the 10-4 loss to the Royals on Thursday (Photo: Christian J. Stewart)

August 24, 2017, Victoria, BC – The host Victoria Mavericks and Fredericton Royals capped off a seven-game day of championship baseball Thursday night at Royal Athletic Park, with the Royals, representing New Brunswick, emerging with a 10-4 win over the Mavericks at the 2017 Baseball Canada Senior Men’s Championships in Victoria. 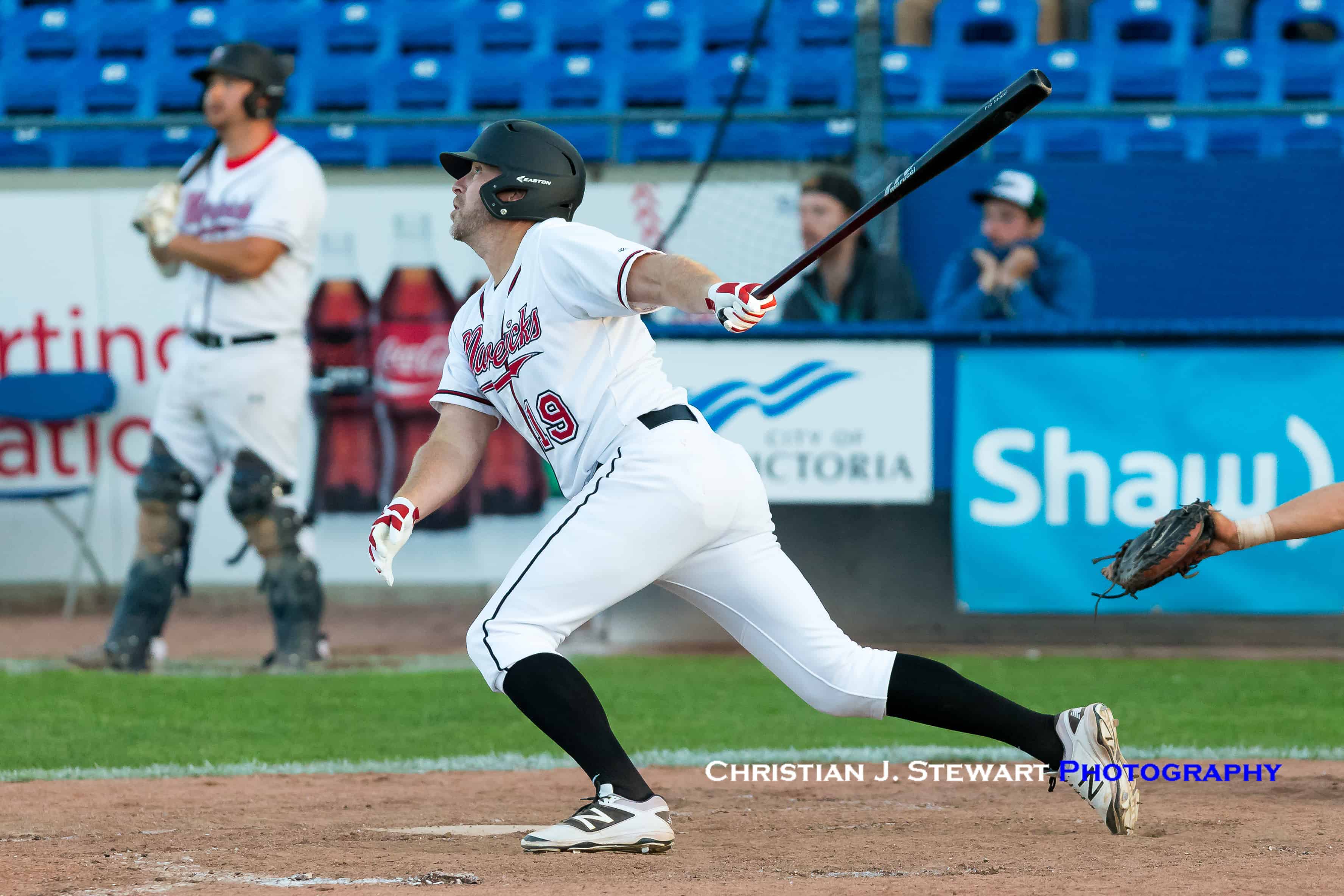 Victoria’s Lanny Burrows would get the Mavericks on the board first Thursday night with an RBI double in the second inning (Photo: Christian J. Stewart)

The win was the second of the day for the Royals who earlier thumped Manitoba 16-4. They, along with the Sherwood Park A’s (Alberta 2) now lead the pack with 2-0 records after day one round-robin action.

The host Mavericks would actually strike first in this one, getting a run off Fredericton starter Shane Kraemar in the bottom of the second, when Sean Murphy would draw a two-out walk and then come in to score on a Lanny Burrows double. 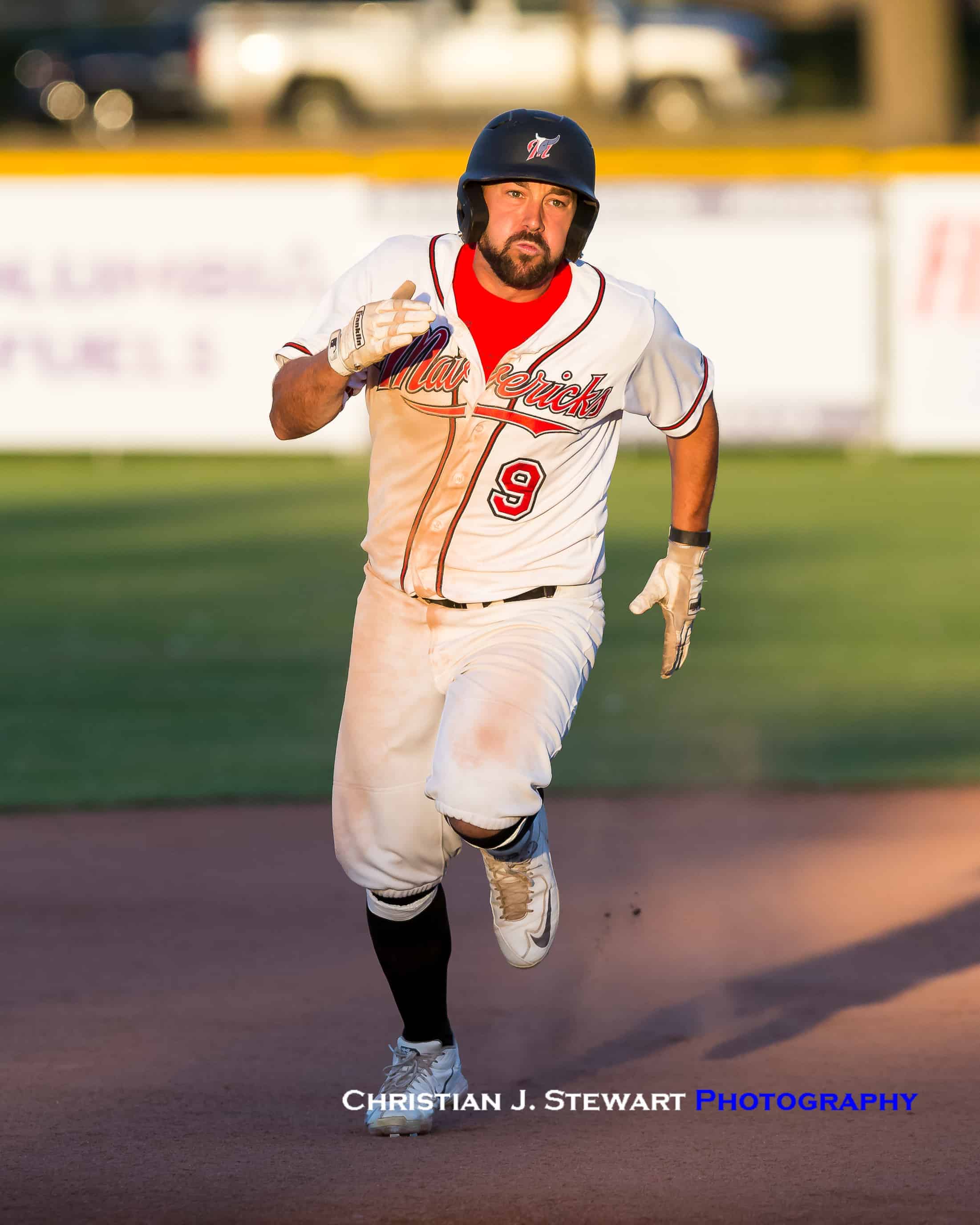 The Royals would respond immediately, scoring three in the top of the third off Victoria starter Aidan Goodall, thanks in part to an RBI double from Mike Washburn and an RBI single from Jeff Watkin. A two-run home run by the Royals Dave Barr in the top of the fourth inning extended the lead to 5-1 and ended the short night for Goodall. 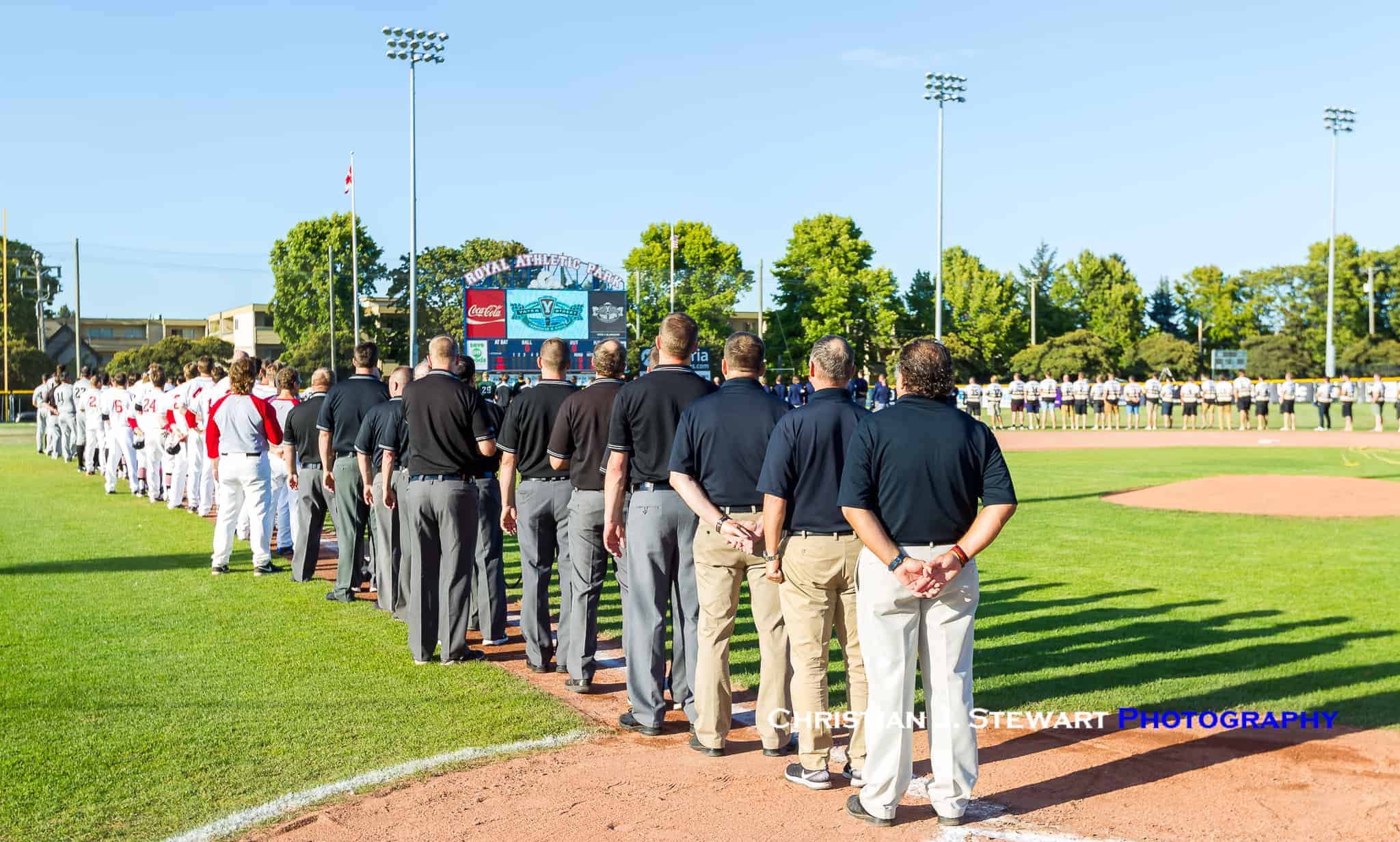 The Mavericks would threaten briefly in the bottom of the fifth, loading the bases with two outs, thanks in part to back-to-back singles from Duncan Blades and Liam Goodall, but Kraemar would end the inning in dramatic fashion by striking out Victoria slugger Kyle Orr to get out of trouble. 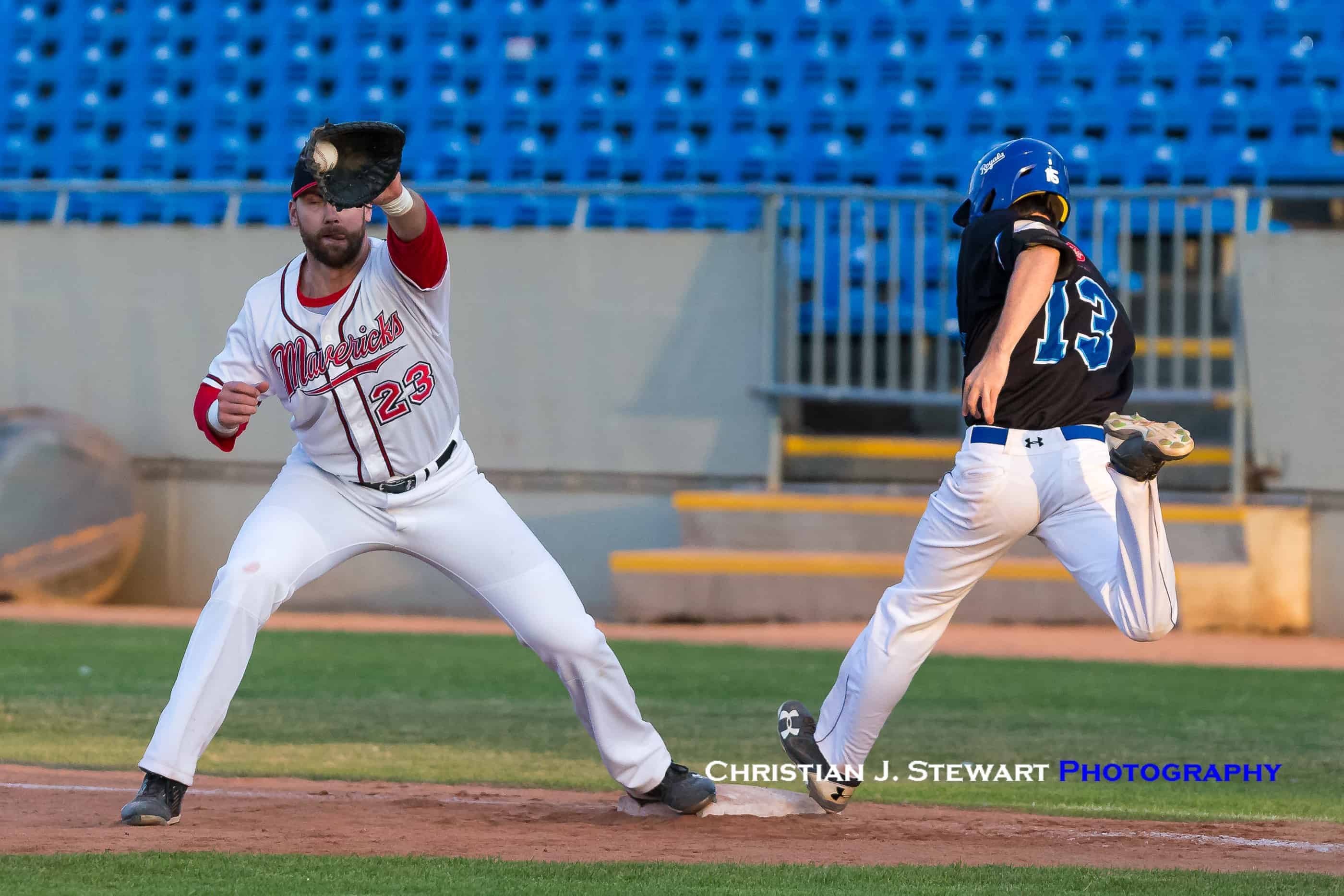 The ball hits the back of Victoria first baseman Kyle Orr’s glove just in time to get base runner Blake Gallagher on this close play at first Thursday (Photo: Christian J. Stewart)

The Royals would make the Mavericks pay for not capitalizing when they had the chance, scoring four more runs in the top of the sixth, thanks to a bases-loaded, three RBI double from Barr, his third hit and sixth RBI of the day and an RBI single from Corey Wood. 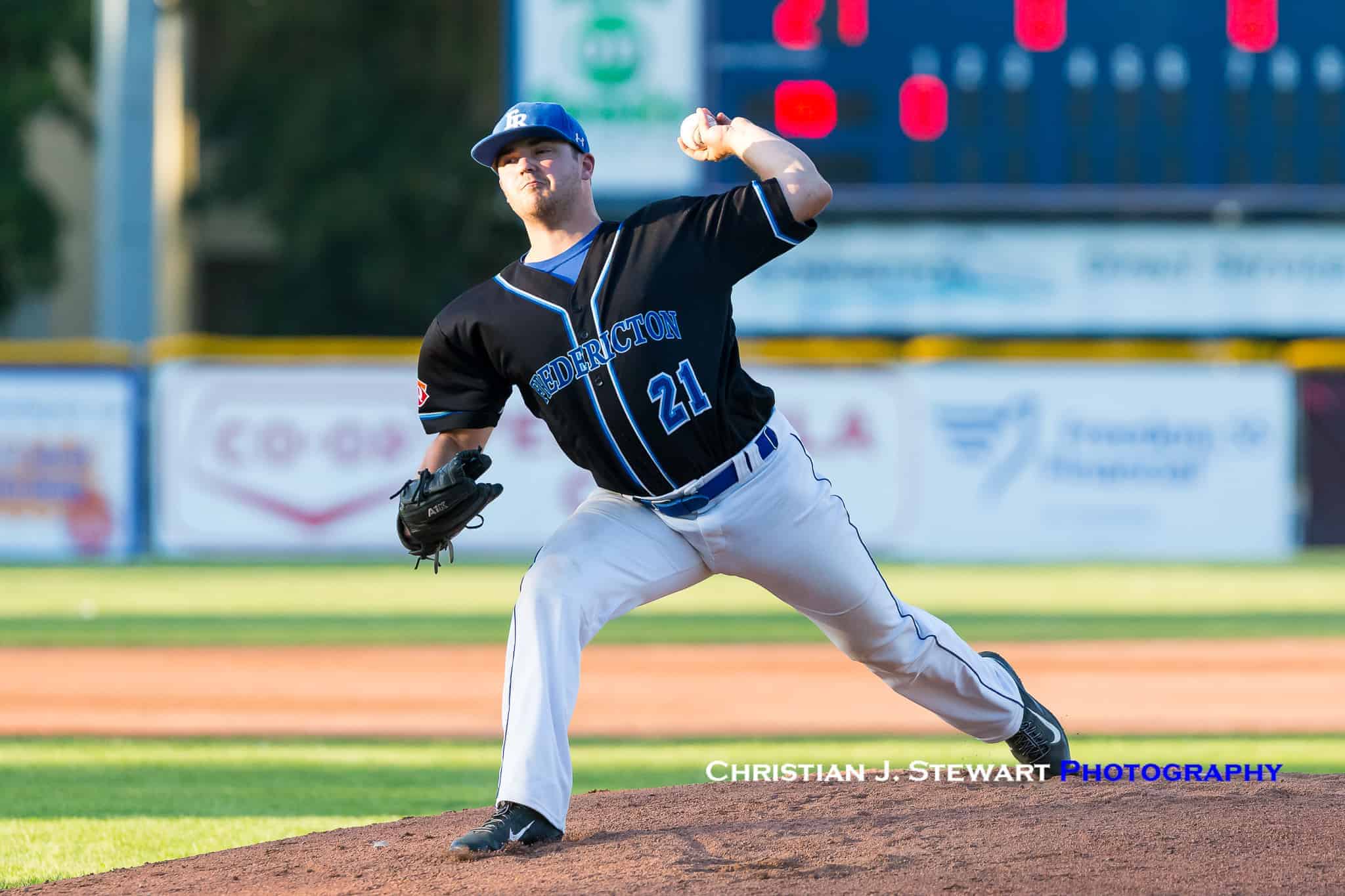 The Royals would then turn the ball over to Shawn Reid, who cruised through the eighth, but then gave up a ninth inning, two-out home run to Duncan Blades, an RBI single to Kyle Orr and an RBI double to Kevin Biro to make the game interesting, but would finally shut things down and secure the second win of the day for the Royals. 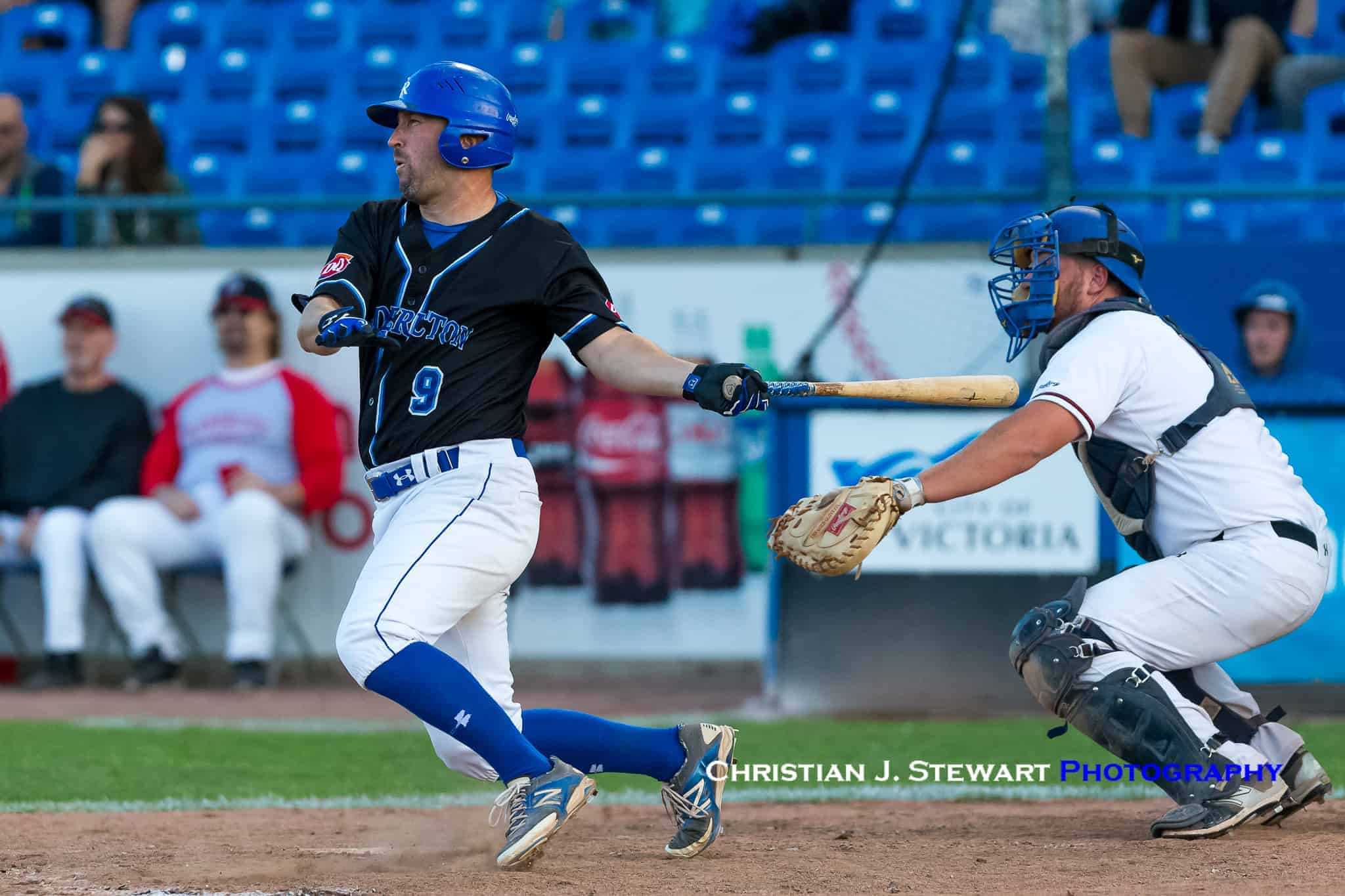 Fredericton’s Dave Barr would have a three hit and six RBI night to lead New Brunswick to a 10-4 win over Victoria on Thursday evening (Photo: Christian J. Stewart)

Fredericton would be led by Barr, who finished with three hits including his home run, six RBIs and three runs scored. Washburn would also have a two-hit night with an RBI. Liam Goodall would have three hits, including a double, for the Mavericks in the losing effort.

Kraemer gets the win, going five full innings, giving up one run on five hits, while walking two and striking out six. Aidan Goodall takes the loss for the Mavericks, going just 3.2 innings, while Brendan Orr saw action for the Mavericks in relief. 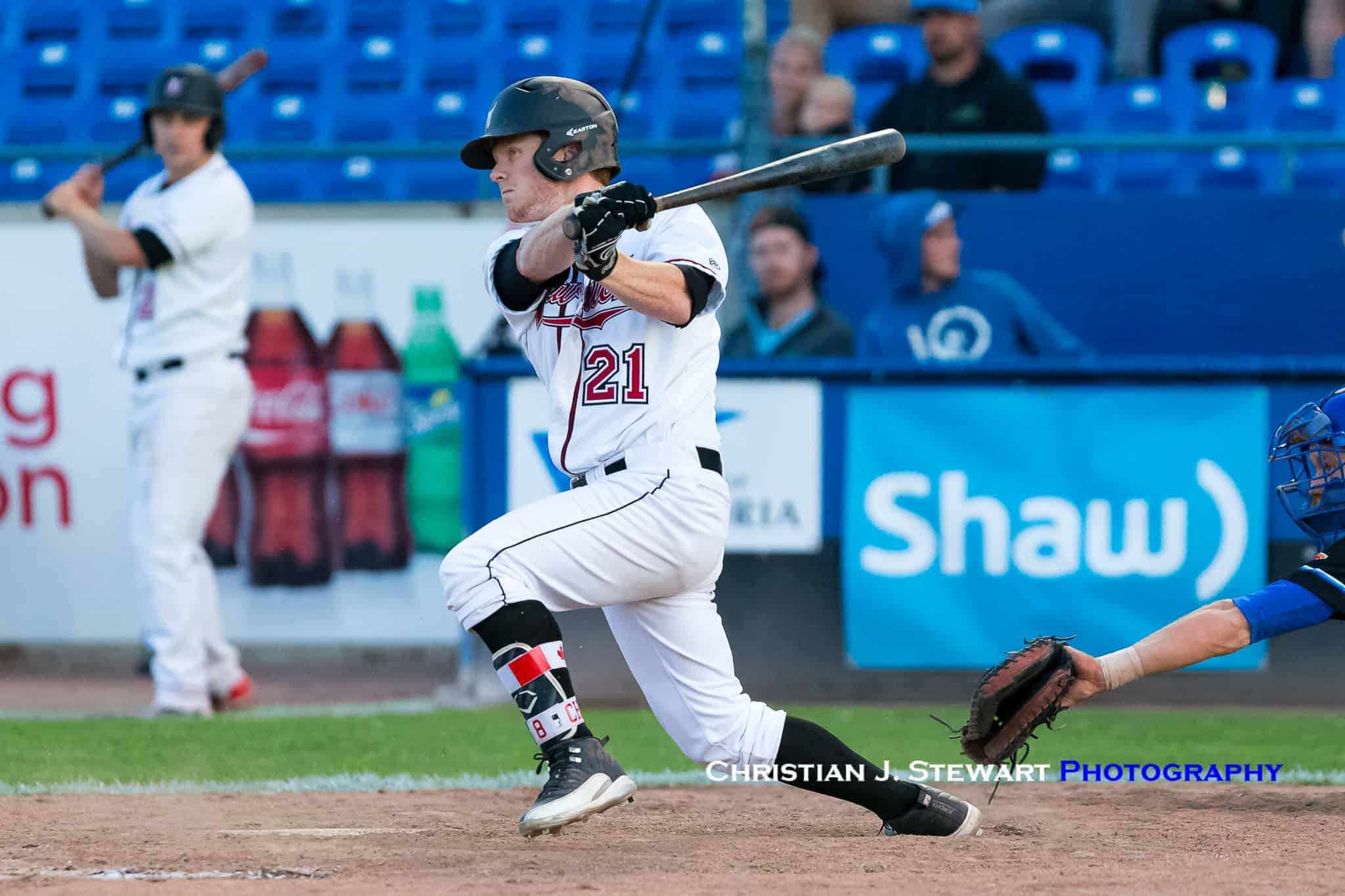 Former Victoria HarbourCat fan favourite Griffin Andreychuk was in the line-up for the Mavericks on Thursday, finishing 0 for 3 at the plate (Photo: Christian J. Stewart)

Brief summaries of the other six games played Thursday can be found below.

Game 1 – Nova Scotia – 11 Newfoundland – 1
The Dartmouth Moosehead Dry, representing Nova Scotia, used a two-hit, complete game performance from starter Jason Mosher and two-hit and three-RBI performances from Anthony McKinley and Davey Wallace to cruise to an 11-1 mercy rule win over the RMM Gonzaga Vikings, representing Newfoundland and Labrador, in opening day action at Royal Athletic Park. The Moosehead scored one in the second, a pair each in the third and fifth and then walked it off with six more runs in the bottom of the sixth to put the game away. The Vikings, with a hit and an RBI from Peter Madden, scored their run in the fifth. 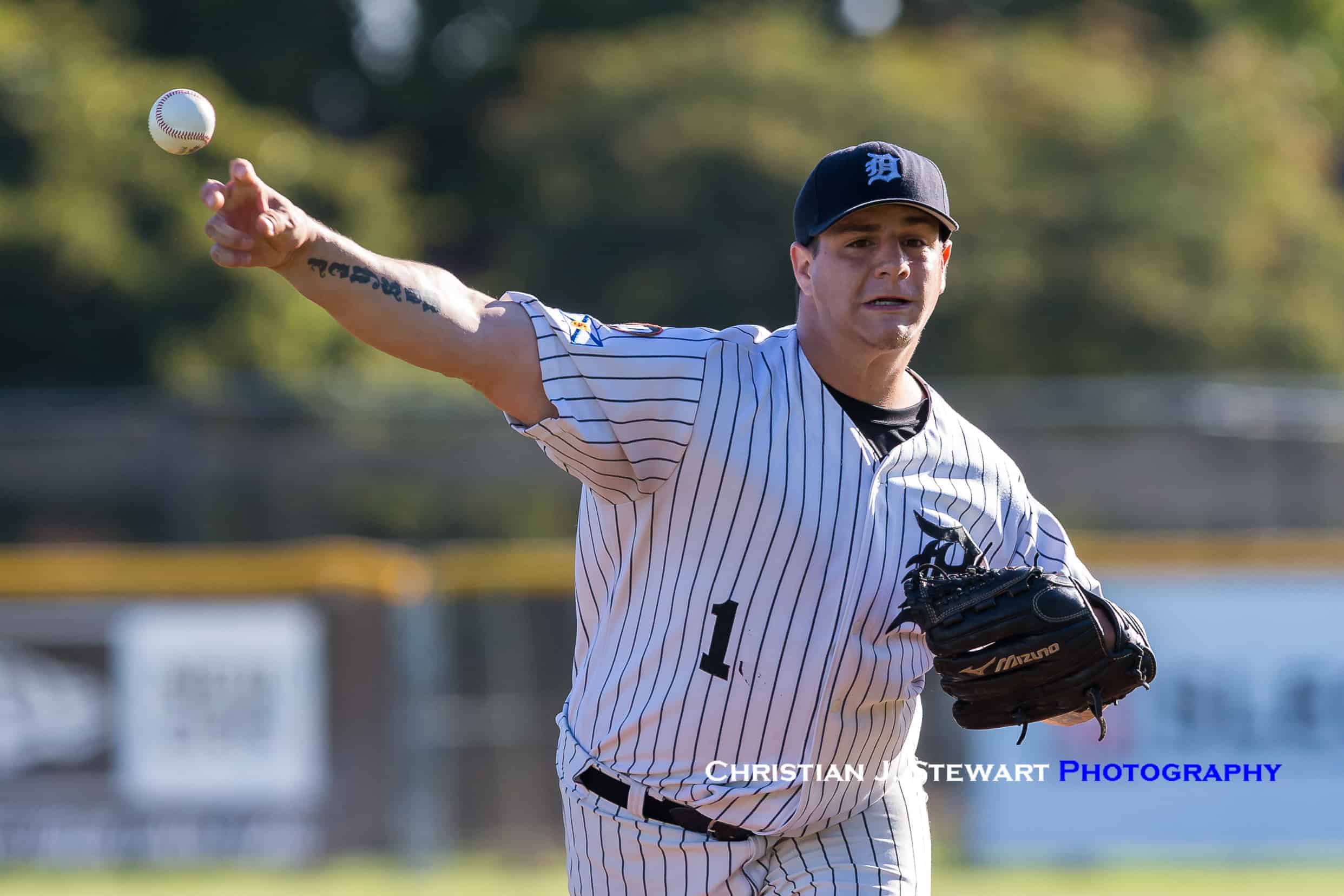 Game 2 – Alberta 1 (Sherwood Park A’s) – 5 Ontario 2 (Mississauga SW Twins) – 1
The Sherwood Park A’s, representing Alberta 1, scored all their runs over their last four at bats to come away with a 5-1 win over the Mississauga Twins, representing Ontario 2, in the opening game action at Lambrick Park. Alberta was led by Andy Hernman who had a pair of hits and four RBIs, including a solo home-run in the top of the sixth. Alberta also received a solo shot from Lance Romanchuk in the fifth and a complete game, eight-hit pitching performance from Adam Paulencu to secure the win. For Ontario, Michael Cardenale and Jerome Smith had a pair of hits each, with Cardenale getting the lone Twins RBI.

Game 3 – Alberta 2 (Red Deer Riggers) – 3 Ontario 1 (Tecumseh Thunder) – 1
In a tight pitching duel between Red Deer’s Josh Edwards and Tecumseh’s Joel Pierce, it was Edwards who would emerge victorious, pitching a complete game, five-hitter to earn the 3-1 win. After the Thunder scored first in the top of inning one, the Riggers scored all the runs they would need in a three-run third inning, thanks to a two-run double from JP Willner and an RBI-double from Jason Louis. Edward’s only trouble came in the fifth when the Thunder loaded the bases with nobody out, but he then retired the next three batters to emerge from the inning unscathed. Alberta’s Jaret Chatwood also contributed a pair of hits to the Red Deer effort, while Casey Power and Ross Barker chipped in two hits each for Tecumseh in the losing effort. Pierce takes the tough loss, also throwing a complete game, giving up six hits and striking out 10. 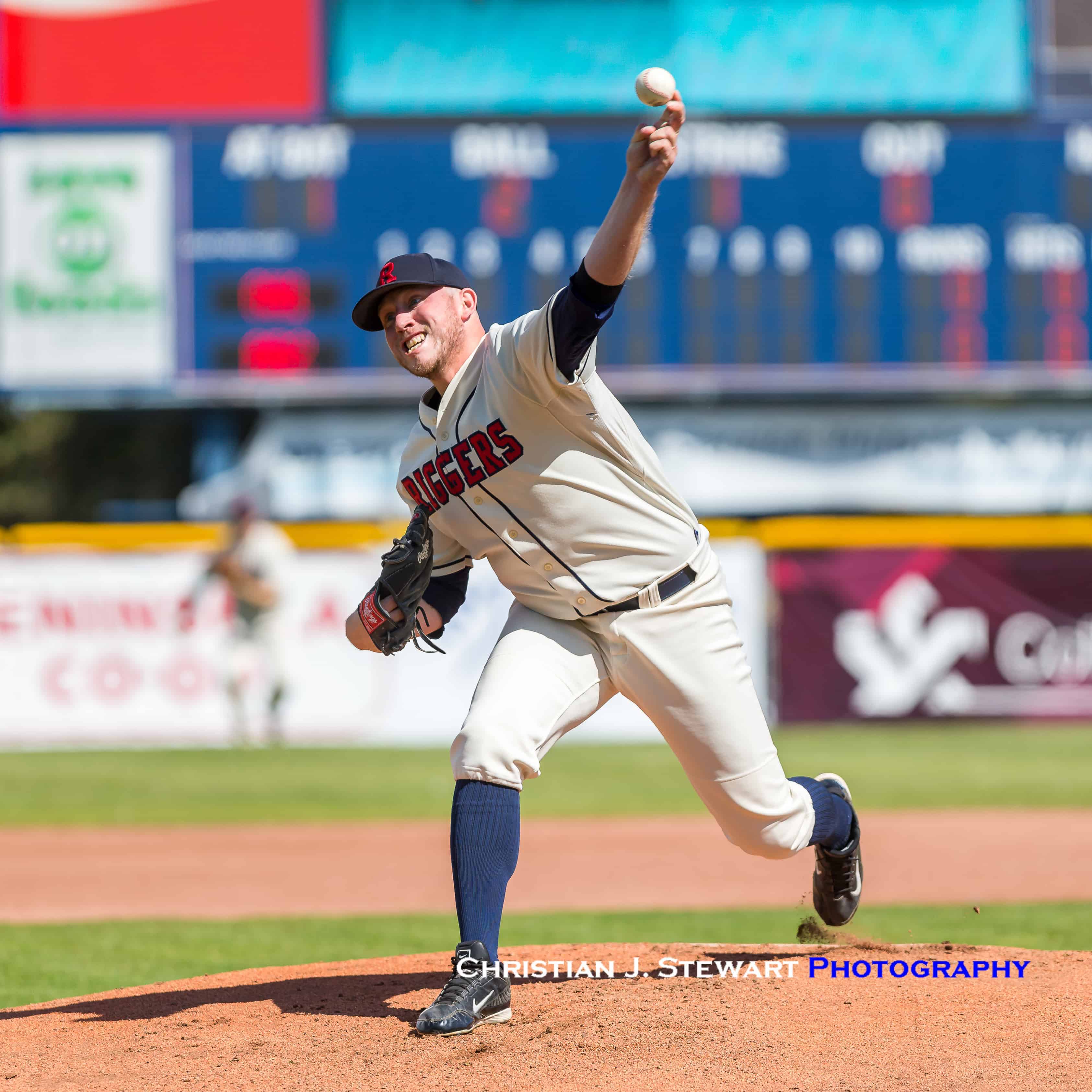 Game 4 – New Brunswick – 16 Manitoba – 4
The Fredericton Royals, representing New Brunswick, scored nine runs in the first two innings and cruised to a 16-4 mercy rule shortened win over Winnipeg SBL, representing Manitoba, in game four action at Lambrick Park. The Royals were led by Dave Barr who had a five hit and two RBI day, including a home run, while Corey Wood had three hits, including two doubles and four RBIs. Three other players had two-hit games, while Jeff Watkin had one hit, but it was a big one, a three-run home run to end the game in the bottom of the sixth inning. Brody McDonald got the complete game win for New Brunswick, giving up four runs on eight hits while walking three and striking out one.

Game 5 – Alberta 1 (Sherwood Park) – 5 BC (Burnaby Bulldogs) – 1
It was another solid pitching performance that ruled the day, as Sherwood Park’s Ryan Murphy threw a complete game four hitter to lead the A’s to a 5-0 win over the Burnaby Bulldogs (BC) in Game 5 action at Royal Athletic Park. The A’s scored all the runs they would need in a four-run fourth inning that was keyed by a two-RBI double from Andy Herman, an RBI single from Jeremy Harasymchuk and an RBI double from Mark Kuzyk. They added another in the sixth for good measure. Cory Scammell had three of the A’s 10 hits, while Herman finished with two hits for the day. Burnaby’s Shawn Schaefer takes the loss, going six complete, giving up five runs on eight hits, while walking three and striking out seven. 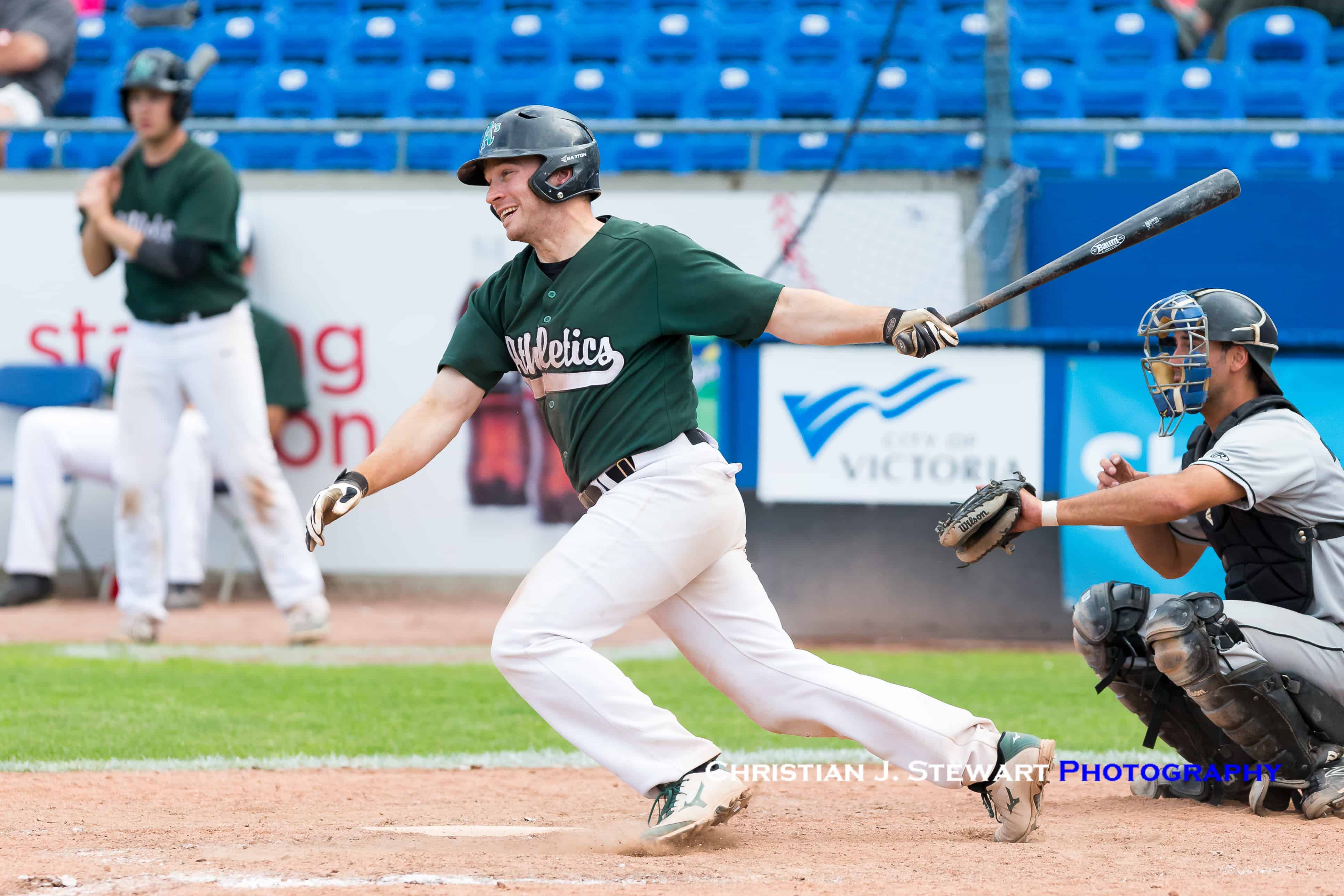 Sherwood Park’s Andy Herman had a pair of doubles and two RBIs to lead the A’s (AB1) to a 5-0 win over the Burnaby Bulldogs (BC) in Game 5 action at Royal Athletic Park (Photo: Christian J. Stewart)

Game 6 – Ontario 2 (Mississauga SW Twins) – 3 Nova Scotia (Dartmouth Moosehead Dry) – 0
Mississauga Twins pitcher Billy Martin held the Dartmouth Moosehead to just five hits over 6.1 innings of work to earn the Twins a 3-0 win in Game 6 action at Lambrick Park. The Twins were led offensively by Troy Black who had three hits and two runs scored, including a double and an RBI. Brendan Emmett also added a double. For Nova Scotia, Anthony McKinley had two of the Mooseheads hits, while Jake Pelham and Chris Farrow added doubles in the losing effort. Jeff Reeves takes the loss going seven complete innings and giving up the three runs on eight hits, while walking three and striking out eight.