One night after exploding for 18 hits in a 17-2 rout of Yakima last night, the HarbourCats scored (only) nine runs to knock off the Pippins for the second straight day to clinch the series. 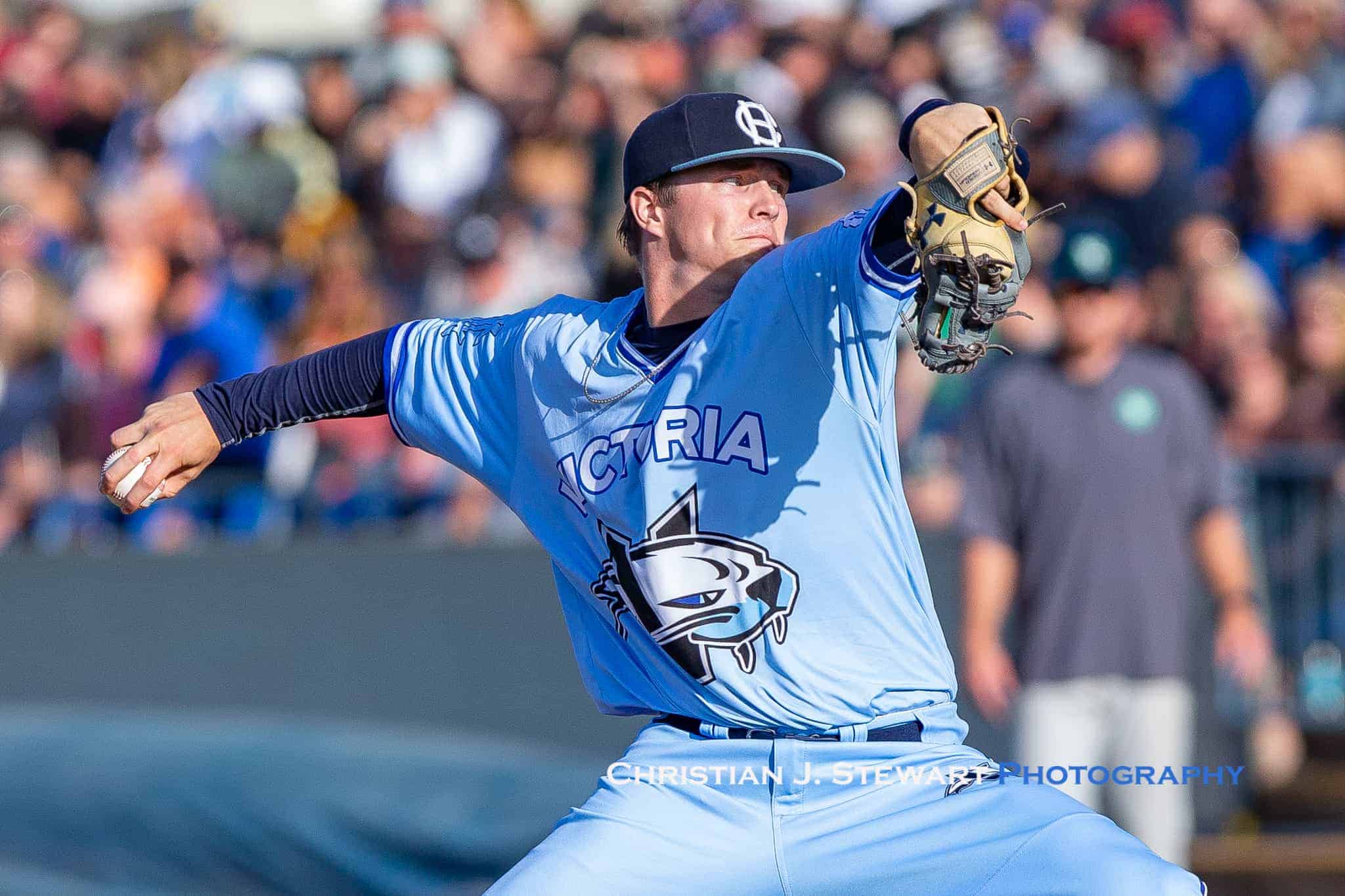 Dakota Hawkins was a force on the hill, scattering just three hits over six innings. (Photo by Christian J. Stewart)

Hawkins, making his first start since allowing only two runs and five hits in a victory over the Bend Elks on July 14, went toe for toe with Pippins ace Joe Magrisi—who will be representing Yakima in the All Star game next week.

The righty out of Lower Columbia struck two of the three batters in the first, and sent down 10 Pippins in a row from the third to the sixth in the winning outing. Hawkins finished his start by scattering just three hits over six innings, racking up a season high six strikeouts in the process. 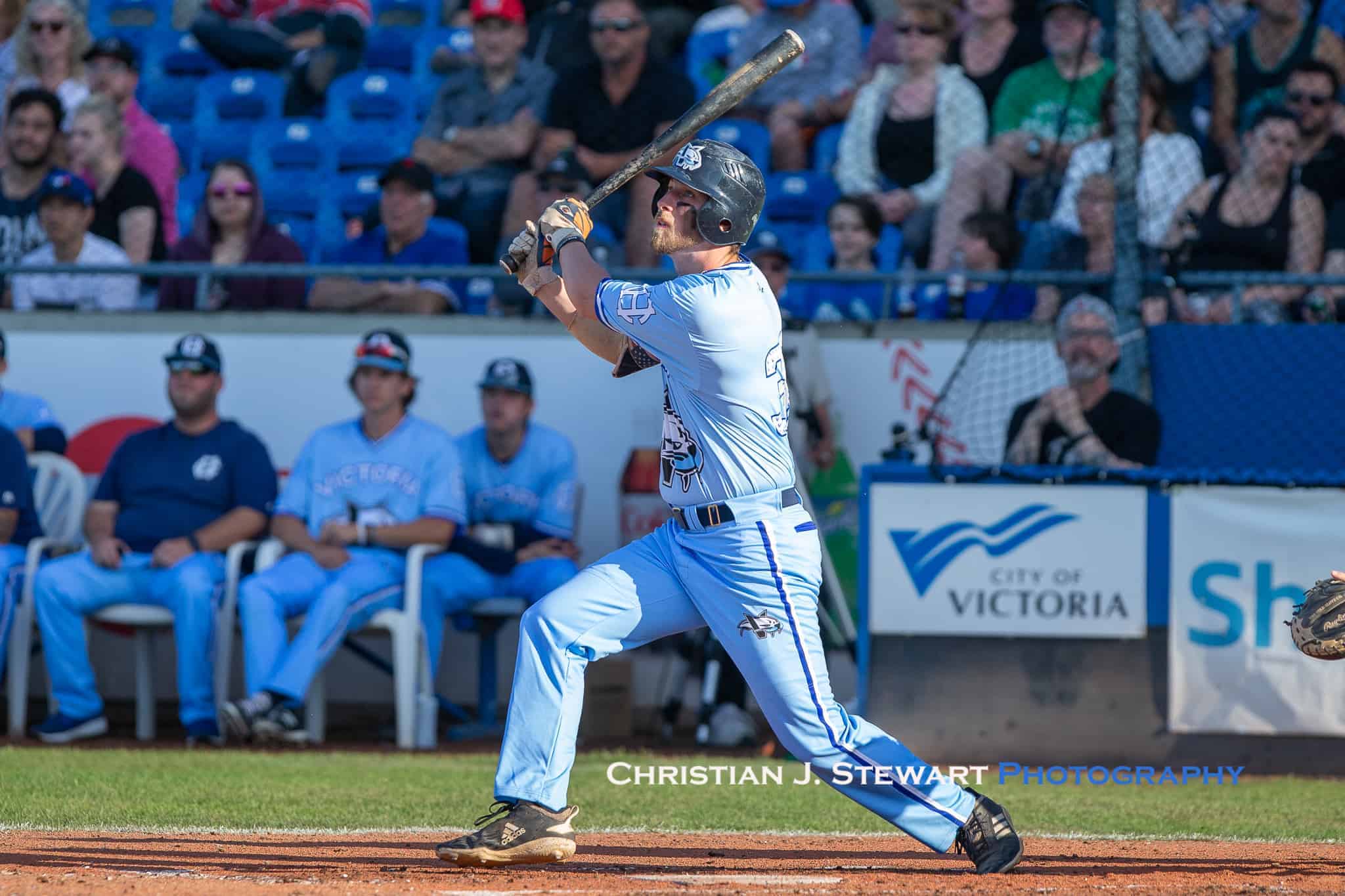 Aside from flashing the leather at the hot corner on the field, Griffin Paxton added two hits and three RBI at the dish in a dazzling performance. (Photo by Christian J. Stewart)

Hawkins also received some flashy support from his shortstop on the left side of the infield.

Chase Meidroth preserved Hawkins’ scoreless start with an unassisted double play in the second, and ended the third by backhanding a line drive to end the third inning. 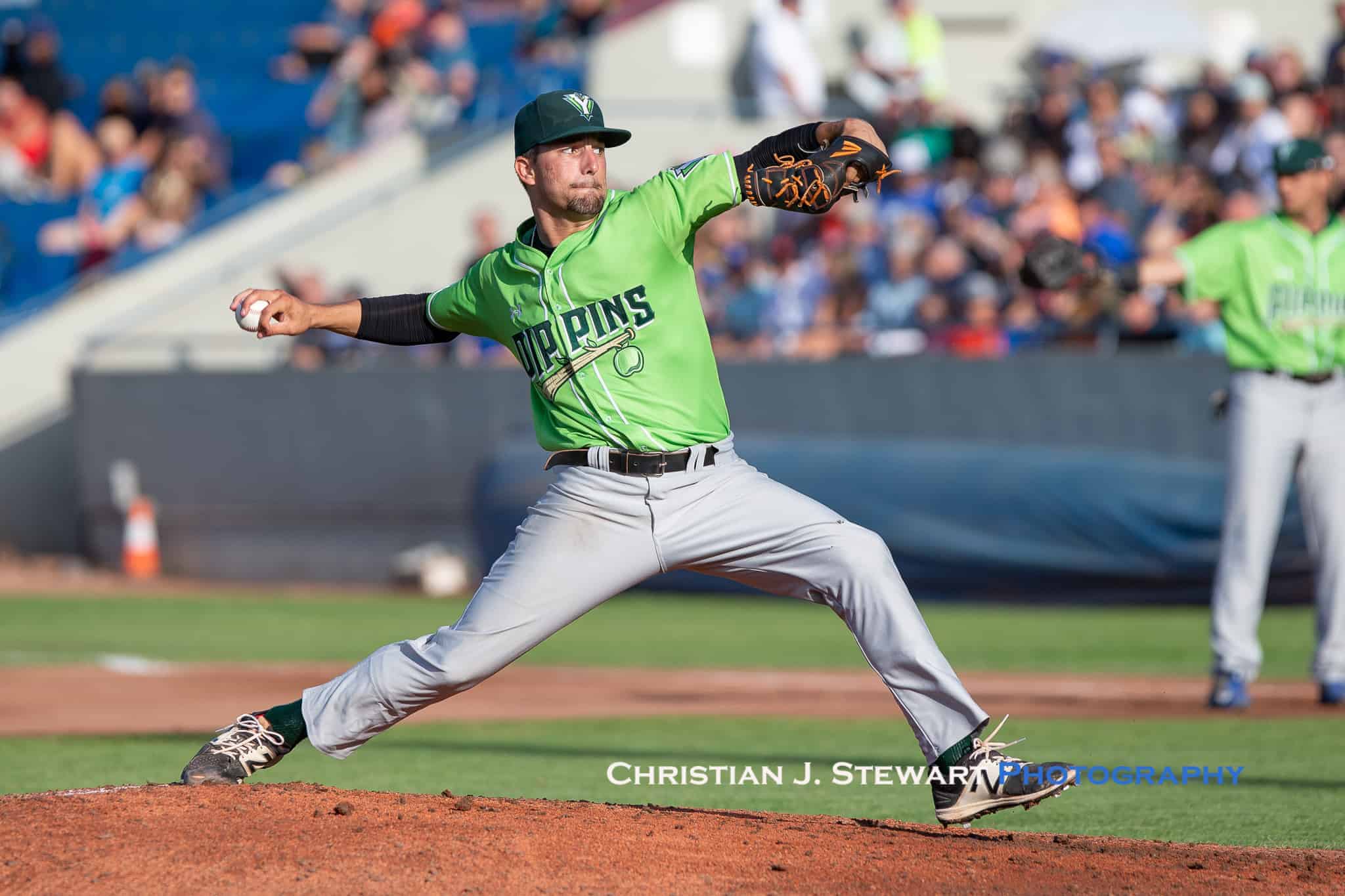 Pippins starter Joe Magrisi racked up a season high 13 strikeouts, but fell victim to the HarbourCats offence in the later stages of the game—also yielding a season high in runs (7) and hits (10). (Photo by Christian J. Stewart)

On the opposing mound, Magrisi recorded a season high 13 strikeouts over six innings, and has dominated every team in the West Coast League in 2019 aside from the HarbourCats. The righty out of Cal State Fullerton came into tonight’s game with a 0.62 ERA, and allowed only two earned runs all season—both coming in a start against Victoria last month.

Magrisi was cruising until the fourth, retiring nine of 10 HarbourCats to start the game, when Meidroth led off the frame with a solo shot over the left field wall. The home run was also Victoria’s first hit of the game. 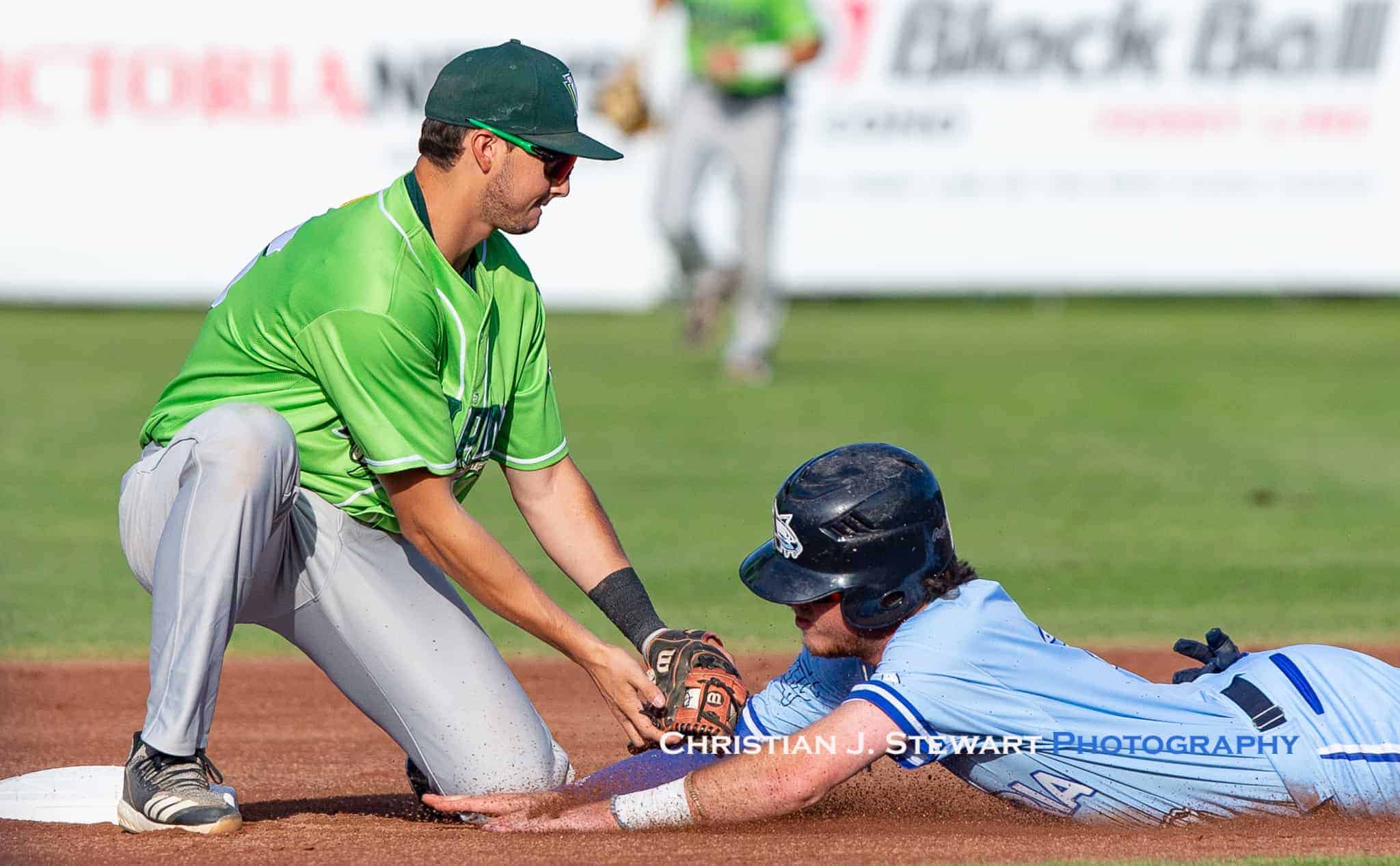 Parker Bramlett was called out trying to steal second in the first inning of tonight’s game. Bramlett, however, would still score two runs and add in three RBI on the game. (Photo by Christian J. Stewart)

Coming back in the fifth, Magrisi struck out the side, before the HarbourCats finally broke through off the righty in the sixth.

Matt Turner led off the inning with a standup triple, while Parker Bramlett scored Turner one batter later with a RBI single. Meidroth notched his second hit of the night with a single to put two men on, while Chase Wehsener made it four consecutive hits to start the frame with a double to score Bramlett. 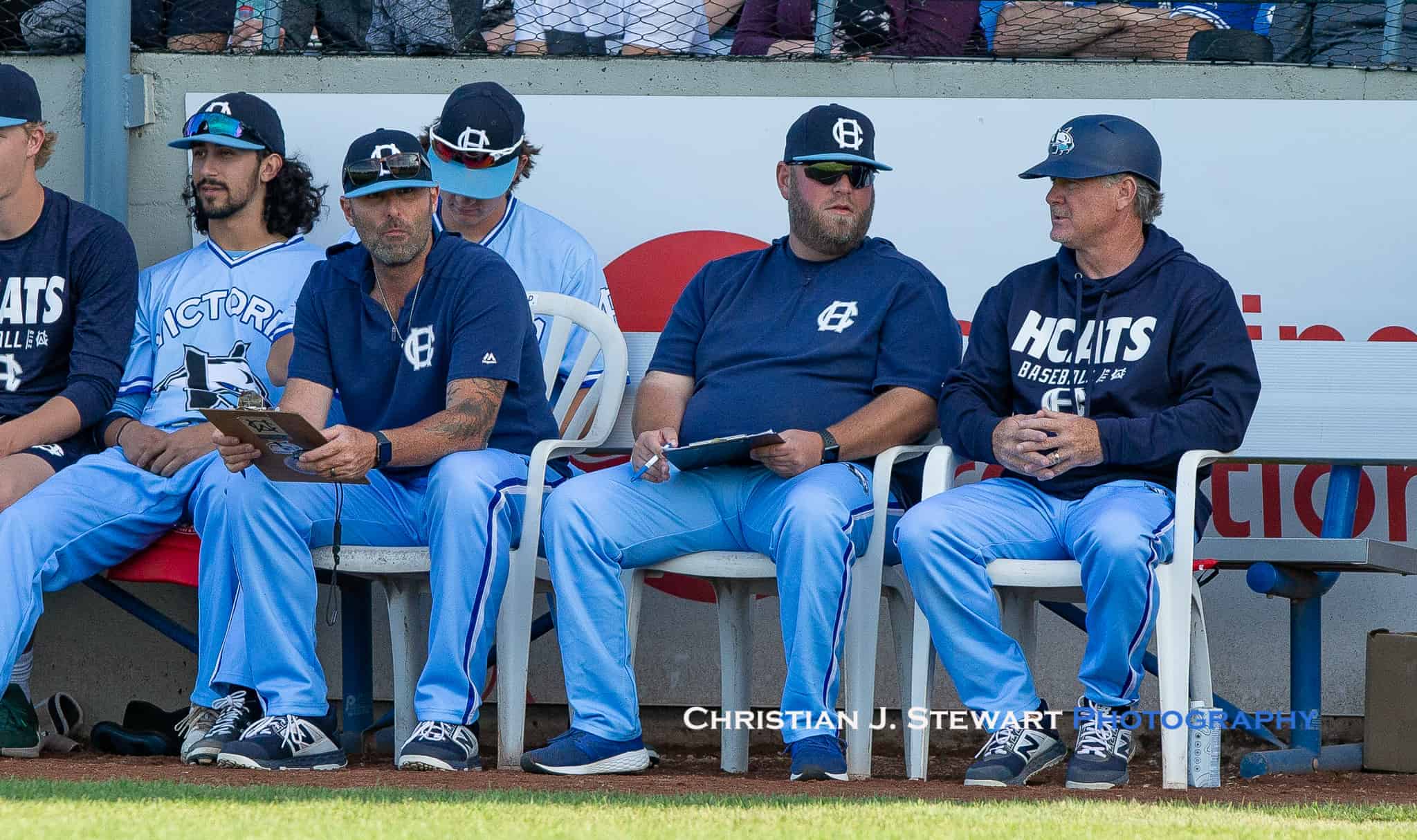 Despite the stone cold facial expressions from the HarbourCats coaching staff, the ‘Cats coaches were all smiles after the game when Victoria scored nine runs in the latter stages of the ballgame. (Photo by Christian J. Stewart)

Tyson Hays kept the order moving with a walk to load the bases, and Griffin Paxton capped off the sixth with a RBI single to make it a 5-0 game.

After Magrisi got three straight outs to end the sixth, Victoria carried the offensive onslaught into the the seventh, as Parker Bramlett chased the Pippins starter with a two-run home run.

Yakima added a run in the eighth, however, Matt Amrhein closed the door in the ninth to seal the victory.

With the victory, coupled with a Wenatchee AppleSox loss in Bellingham, the HarbourCats also gained some breathing room atop the Second Half North division standings—now sitting 1.5 games ahead of Wenatchee for first place.

The HarbourCats will go for the series sweep tomorrow afternoon, first pitch is scheduled for 1:00p.m. at Wilson’s Group Stadium.