Victoria’s Noah Prewett crushes a two-run homer to left in the second inning Saturday. Prewett was one of four HarbourCats to launch a long ball in the 6-1 win over the Sweets (Photo: Christian J. Stewart)

June 24, 2017, Victoria, BC – The Victoria HarbourCats used home runs from four different players and a successful debut from center fielder Hunter Vansau to roll to a 6-1 win over the Walla Walla Sweets in West Coast League action Saturday night in Victoria. 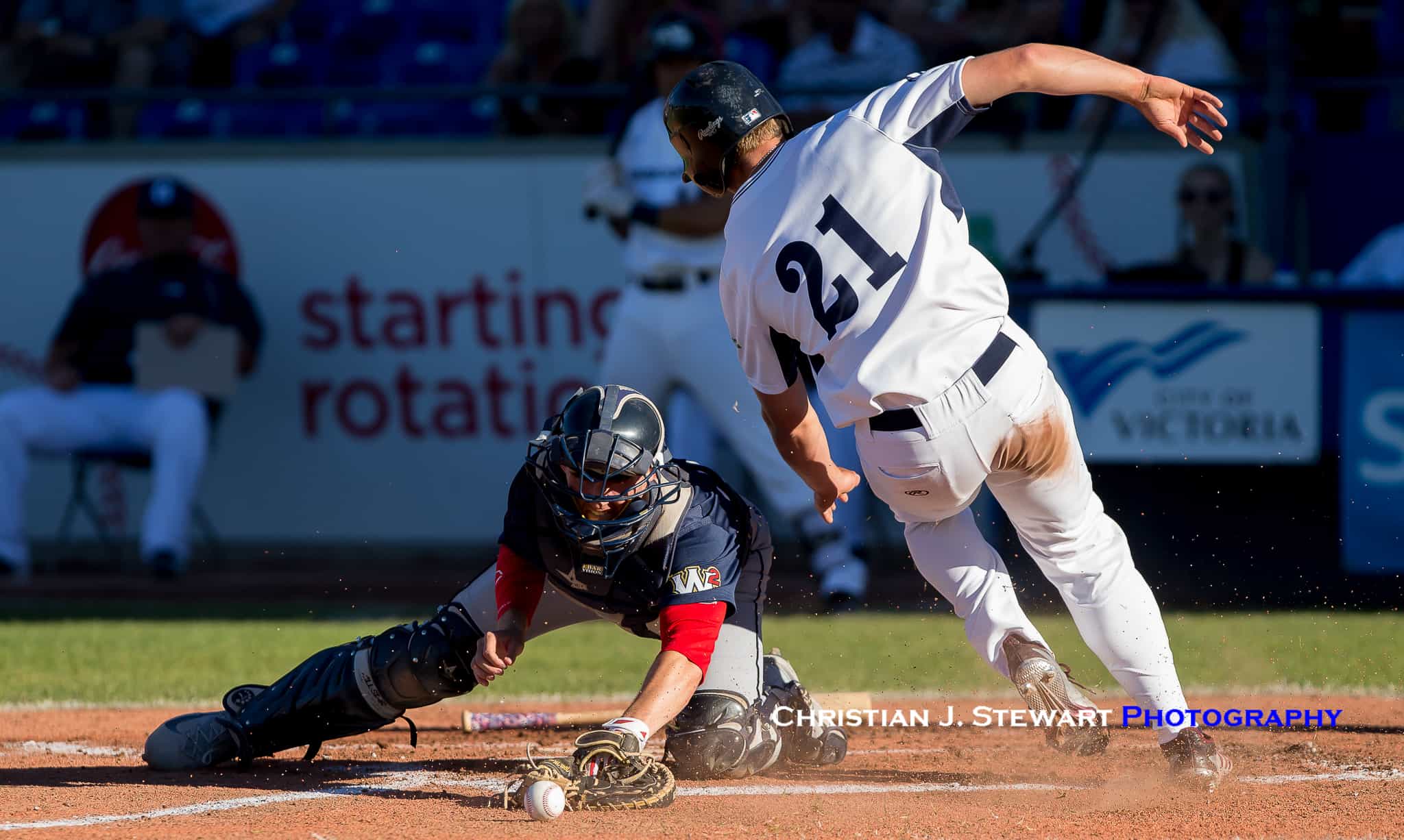 Victoria’s Hunter Vansau skirts around Walla Walla catcher Will McInerny, who had trouble with an errant throw, to score the first run of the evening on Saturday (Photo: Christian J. Stewart)

The win snaps the HarbourCats three game losing streak and keeps them mathematically in the hunt for the first half division title with a record of 10-11, now 3.5 games back of Division leading Bellingham. 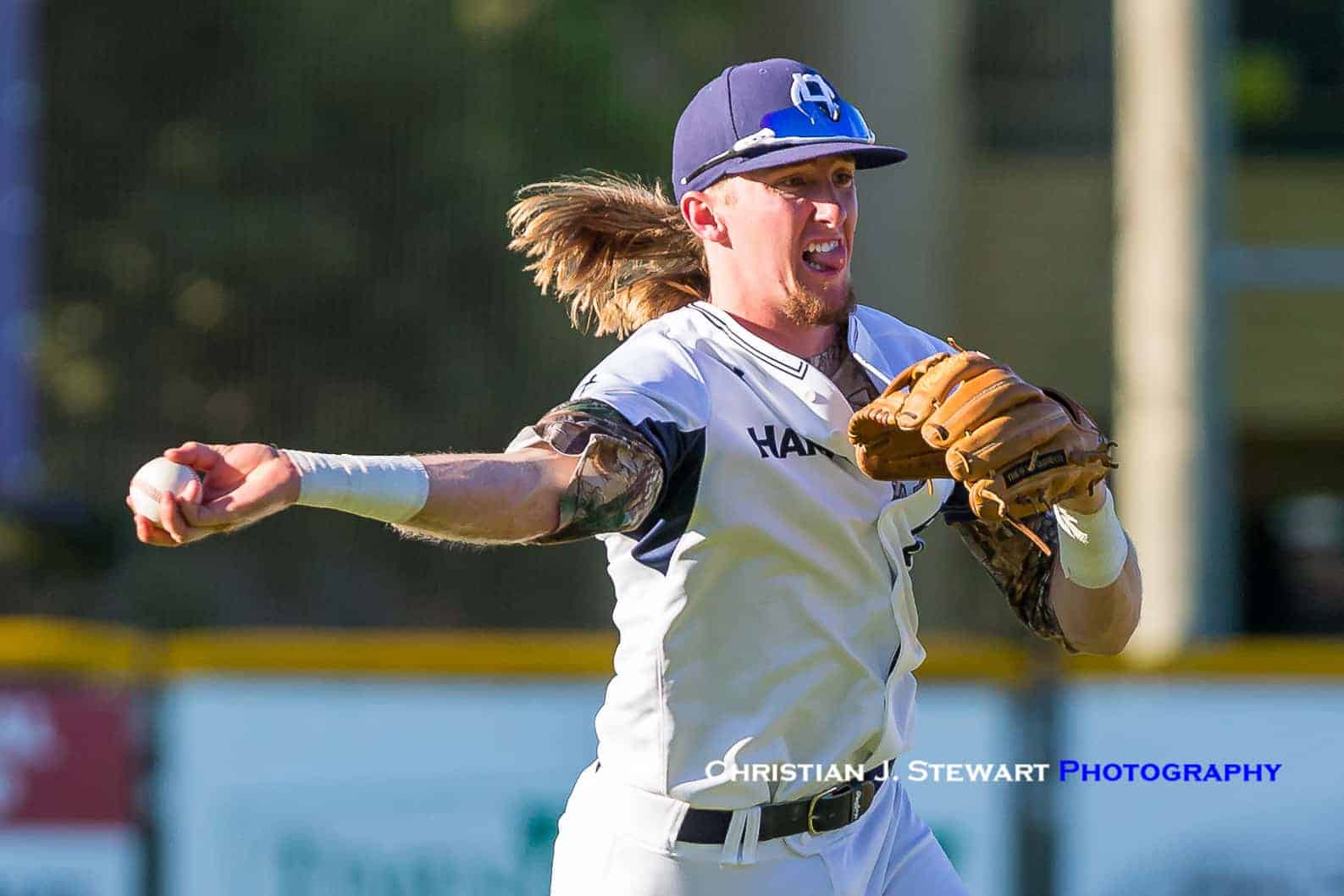 Baylor’s Davis Wendzel made his first start at shortstop for Victoria Saturday and was very busy including this play early in Saturday’s game (Photo: Christian J. Stewart)

The HarbourCats, who have been hunting for early inning runs with no success lately, needed only to insert someone named Hunter at the top of the lineup to finally have some early game success.

Vansau began the game for the ‘Cats with a leadoff single, stolen base and then scored on a Shane McGuire hit and throwing error to give the Cats an early 1-0 lead. 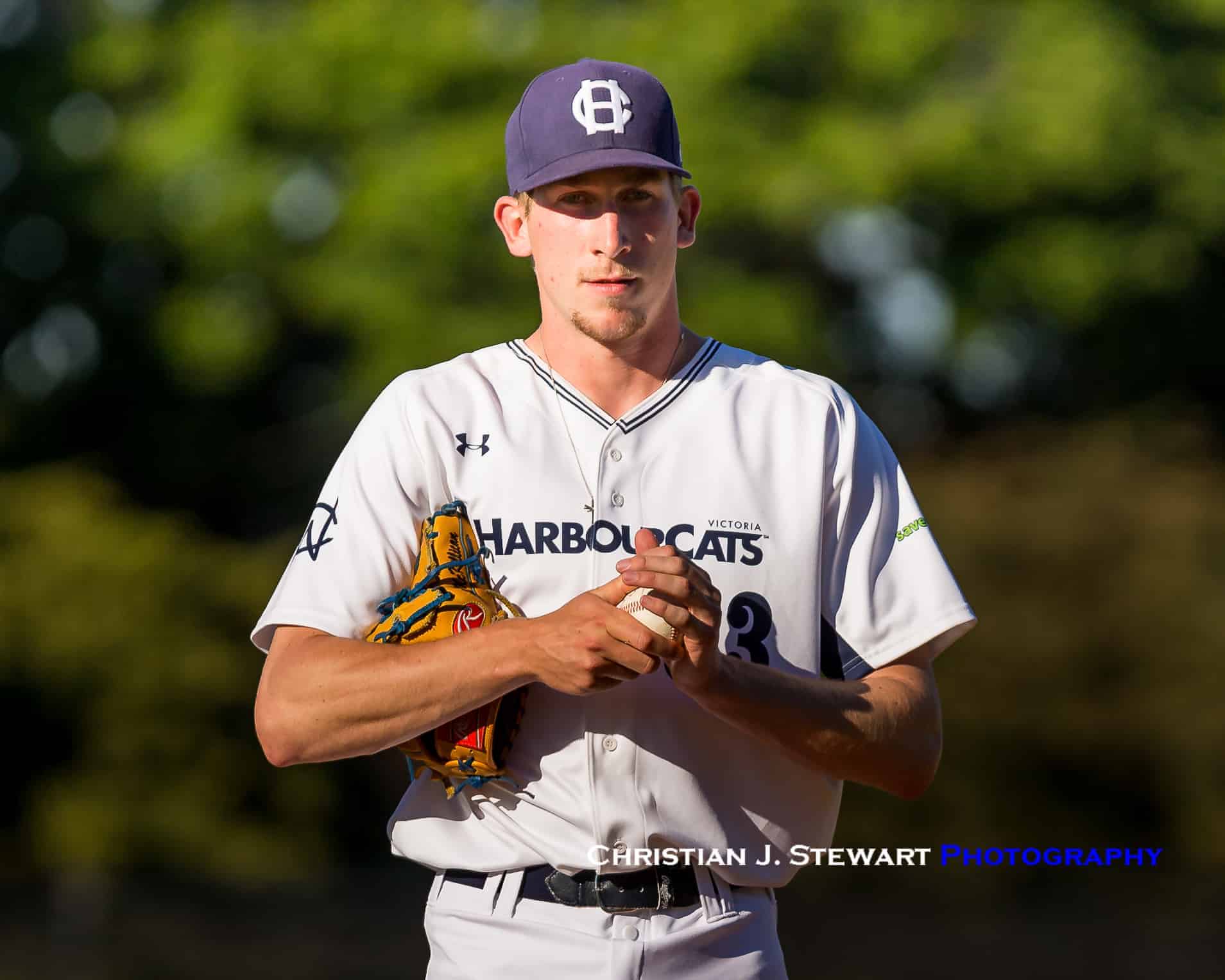 Victoria starter Adam McKillican had his second quality start in a row, going 7 scoreless innings against the Sweets to get the win on Saturday (Photo: Christian J. Stewart)

Cue the long ball.  The HarbourCats would use that early inning spark to get their bats in gear and in the second inning, both Riley Zayicek and Noah Prewett, making his first start of the season at home, got to Walla Walla starter Darius Vines with home run blasts.  Zayicek began with a one-out solo shot, while Prewett launched a two-run shot, scoring Tanner Rempel who had walked. 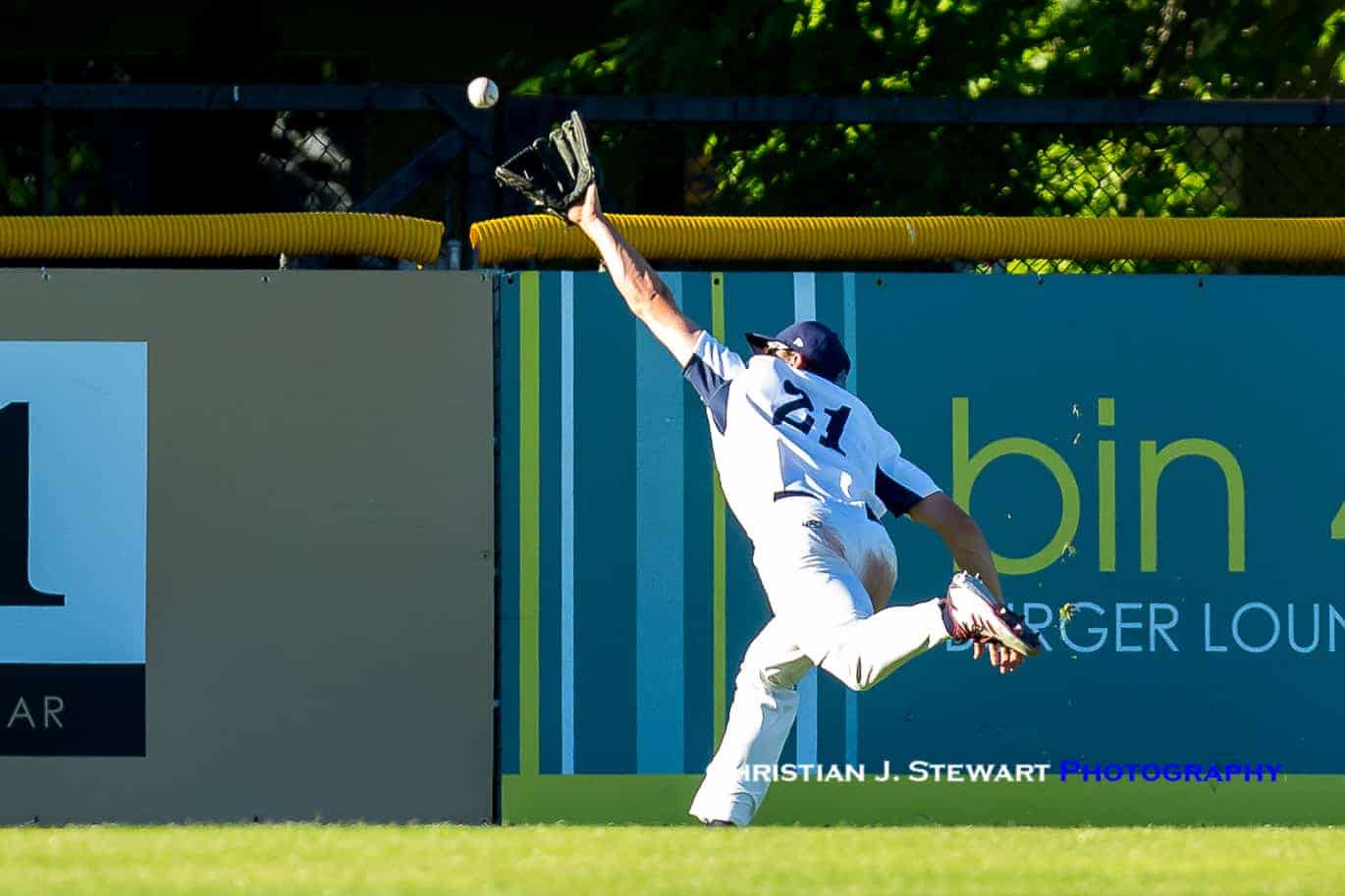 The long ball parade continued in the sixth inning, this time with Tucker Johnson and Kevin Collard going with back-to-back jacks off Sweets reliever Jarrod Molnaa to up the score to 6-0. 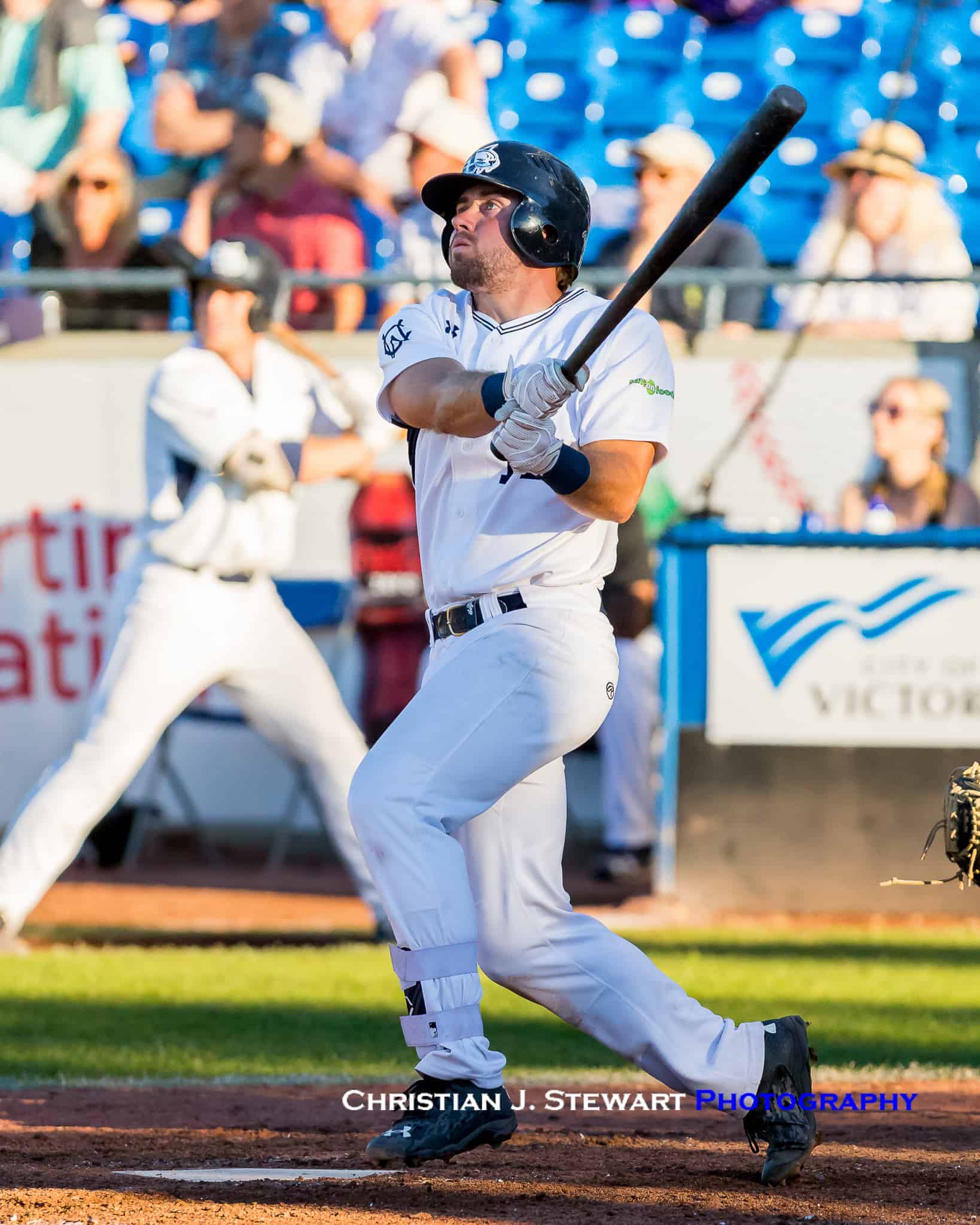 Meanwhile, Victoria starter Adam McKillican was enjoying another quality start, working his way through seven innings of scoreless ball, giving up, eight scattered hits, while walking none and striking out three.

He also had help from his defense, including a pair of double plays to get out of trouble in the fourth and seventh innings and a spectacular diving catch by Vansau in deep center in the third inning to take extra bases away from Walla Walla’s Nick Nyquist. 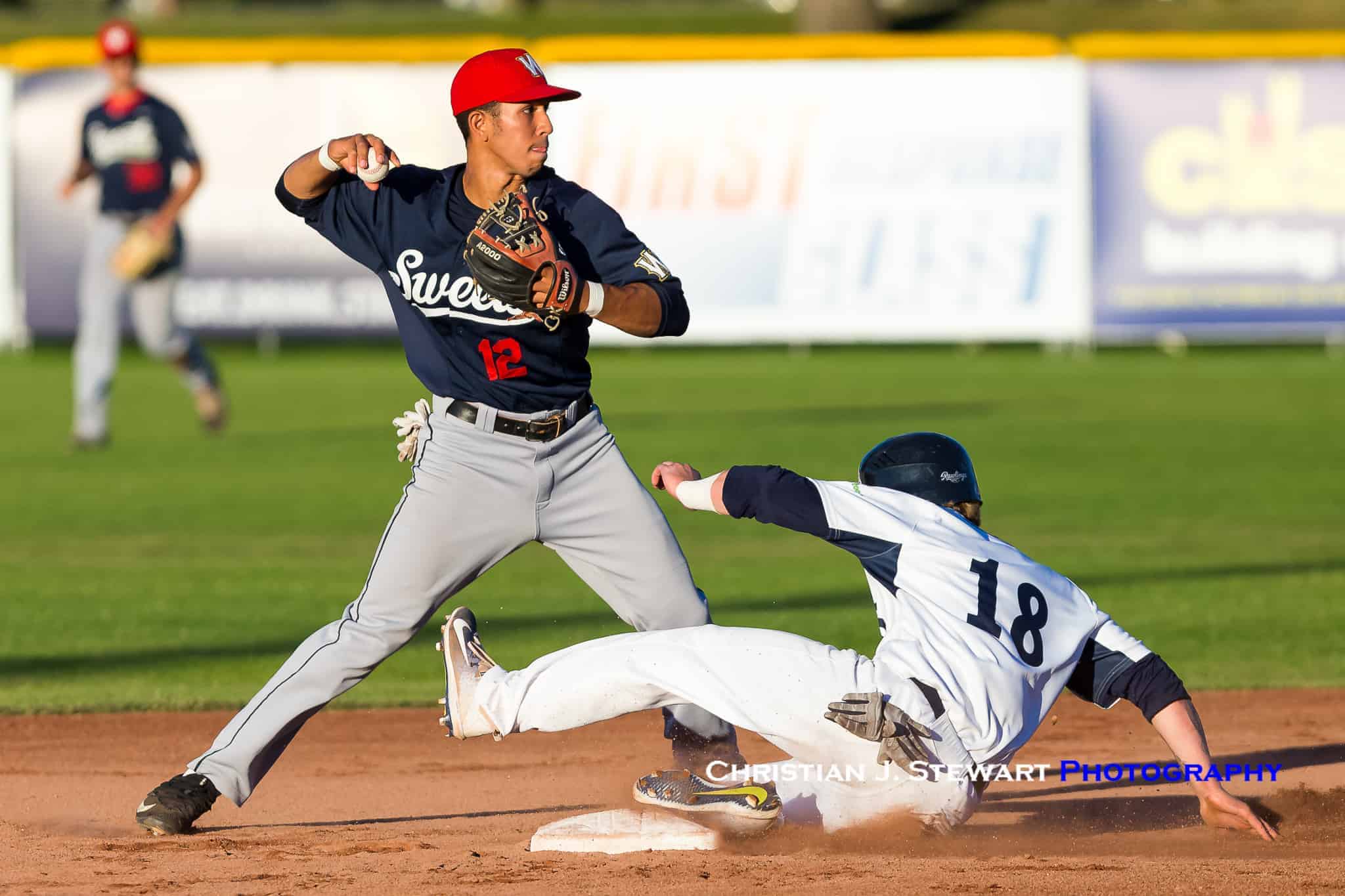 Taylor Prokopis came in to pitch the eighth inning for Victoria, allowing a pair of singles, the second of which led to the Sweet’s only run after a throwing error past first allowed Will McInerny to come all the way around from first to score. Jack Tagget then closed out the ninth with no further damage to preserve the 6-1 win.

With the win, McKillican moves to 3-0 on the season.  Vines takes the loss, his first of the year. 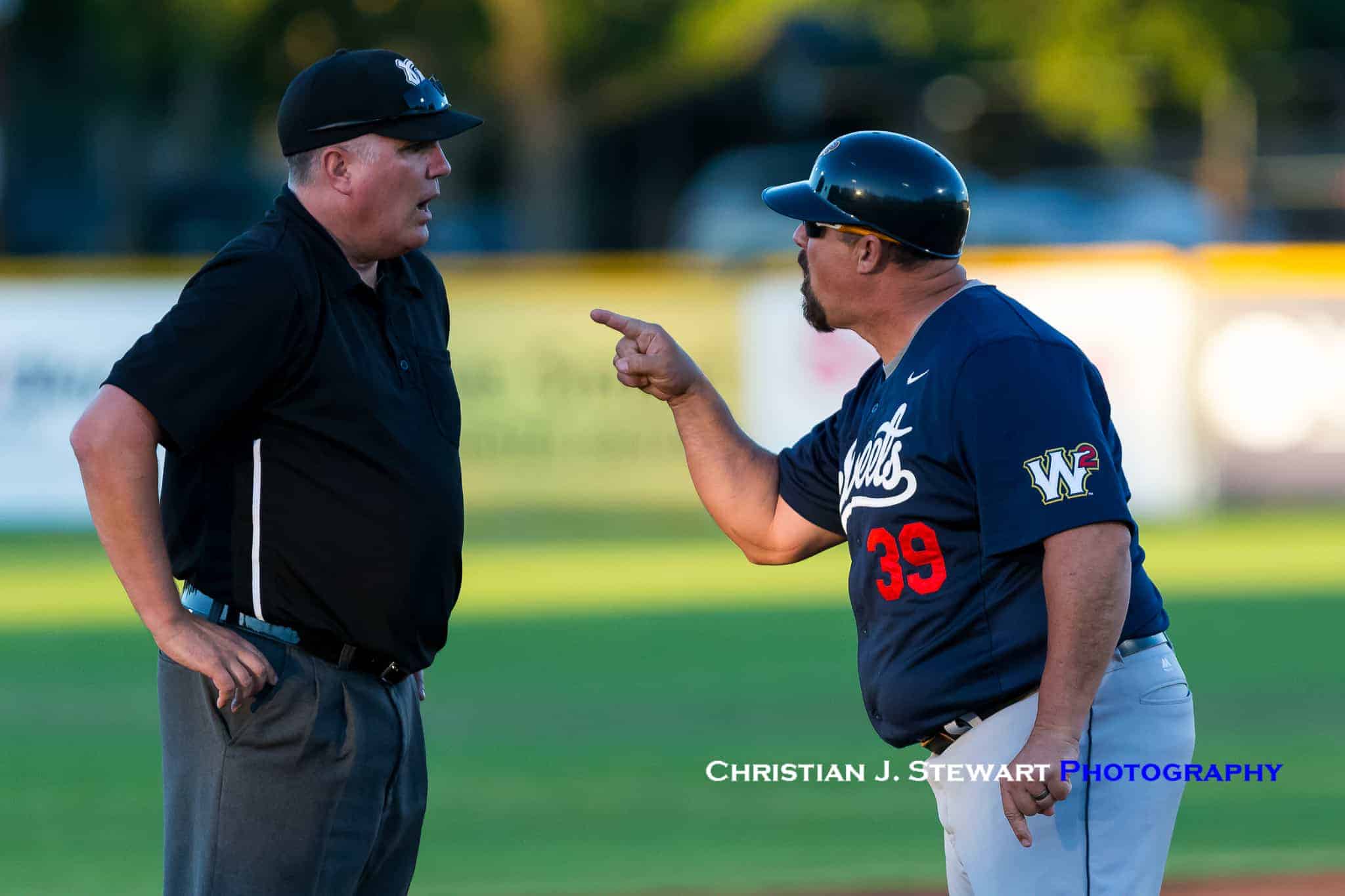 Sweets’ Manager Frank Mutz gives umpire Sean Sullivan a piece of his mind after being ejected for arguing a close call at third base late in Saturday’s game (Photo: Christian J. Stewart)

The teams close out the three-game series, the rubber match of the set, with a 1:05 PM start on Sunday.  Isaac Mullins is the scheduled starter for Victoria, while Matt Amrhein will get the call for the Sweets.

Cat Scratches:  Pitcher Greg Casper has been released from the team following an injury suffered last week.  Infielder Harrison Bragg from Mississippi State arrived mid-game Saturday and should be in the lineup Sunday afternoon.