Nick Plaia is congratulated after scoring one of his four runs in the HarbourCats 18-7 win over Kelowna on Saturday (Photo: Christian J. Stewart)

June 30, 2018, Victoria, BC – Perhaps the HarbourCats should run more often before games.

After being put through the equivalent of a hockey “bag-skate” prior to their game against the Kelowna Falcons Saturday night, the Victoria HarbourCats came out with a renewed energy both on the bench and at the plate, pounding out 22 hits, including four home runs, to cruise to an eventual 18-7 win over the Kelowna Falcons in West Coast League action Saturday night at Wilson’s Group Stadium at Royal Athletic Park. 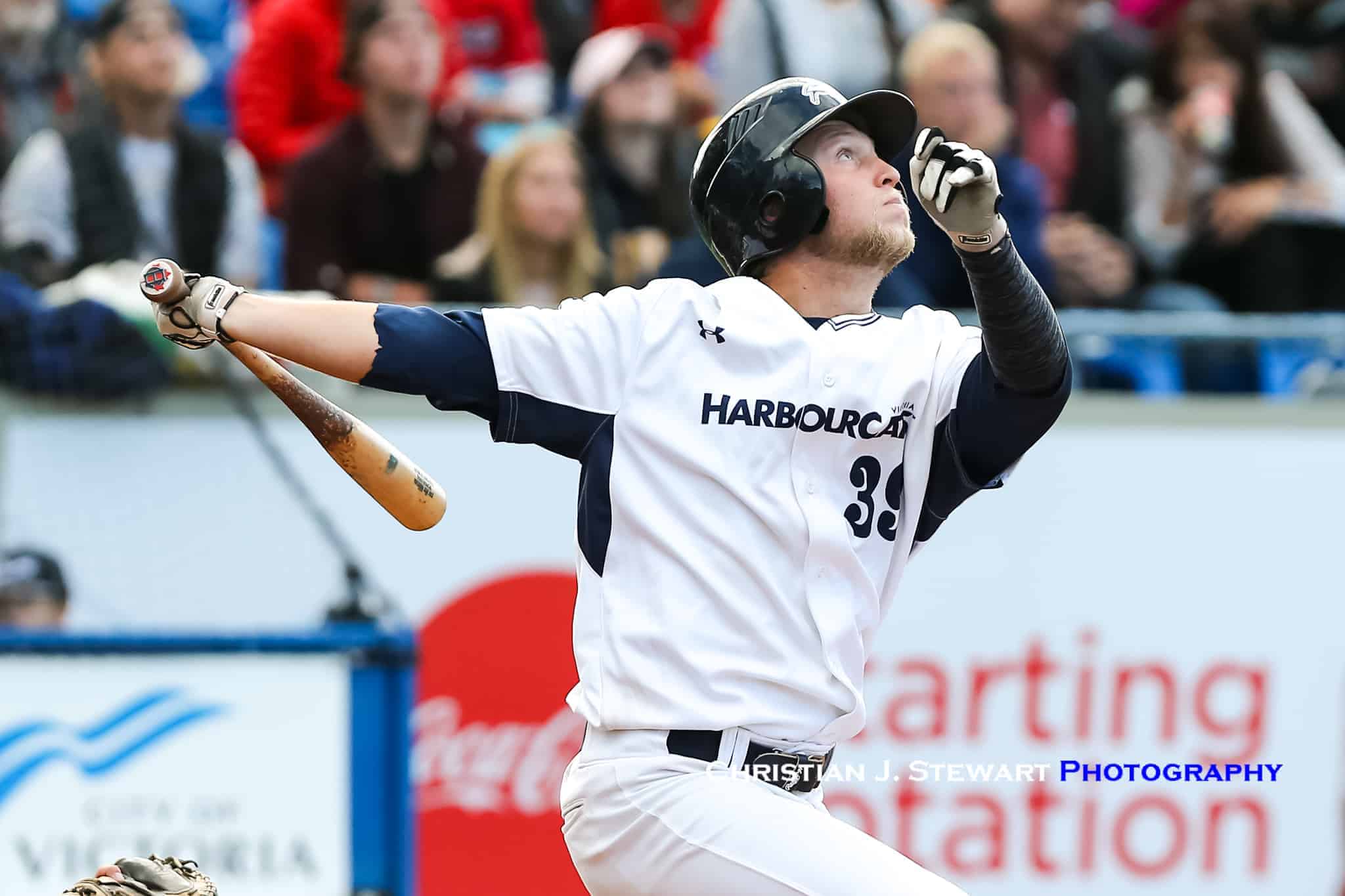 It was a night to be remembered for Victoria’s Dustin Miller Saturday as he homered twice, including a grand slam, finishing with 8 RBI in the win against Kelowna (Photo: Christian J. Stewart)

The HarbourCats offensive explosion saw them score 10 runs in the first four innings to jump into a 10-1 lead, with three of those runs coming in the first inning, thanks in part to an RBI-single from Matt Clayton and an RBI-double from Michael Malinchak, and five more coming in the fifth inning, thanks to a three run home run from Dustin Miller – his first of the evening –  and a solo shot from Nick Plaia. 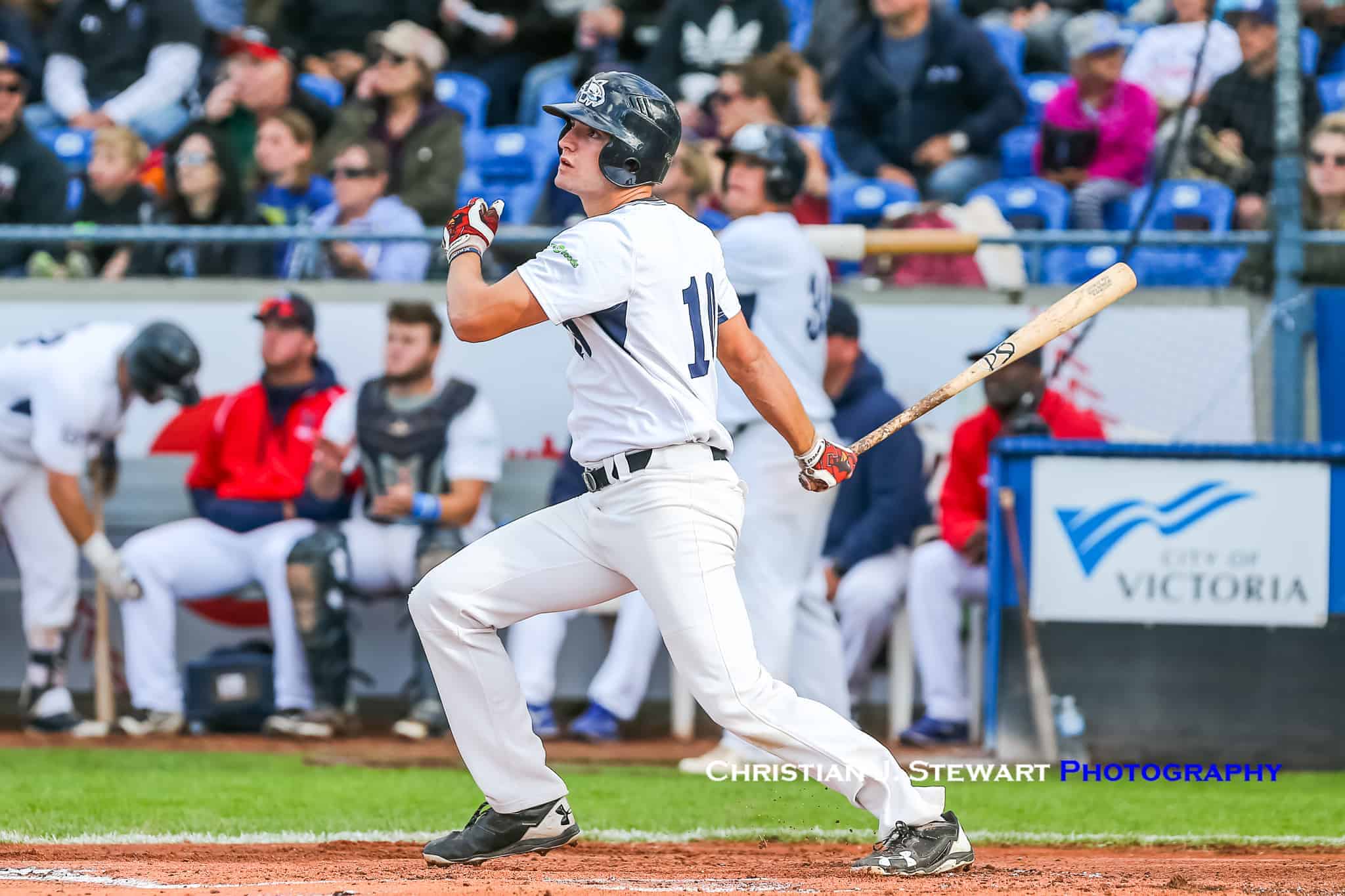 Dustin Demeter had a three-hit night Saturday against the Falcons, including this double early (Photo: Christian J. Stewart) 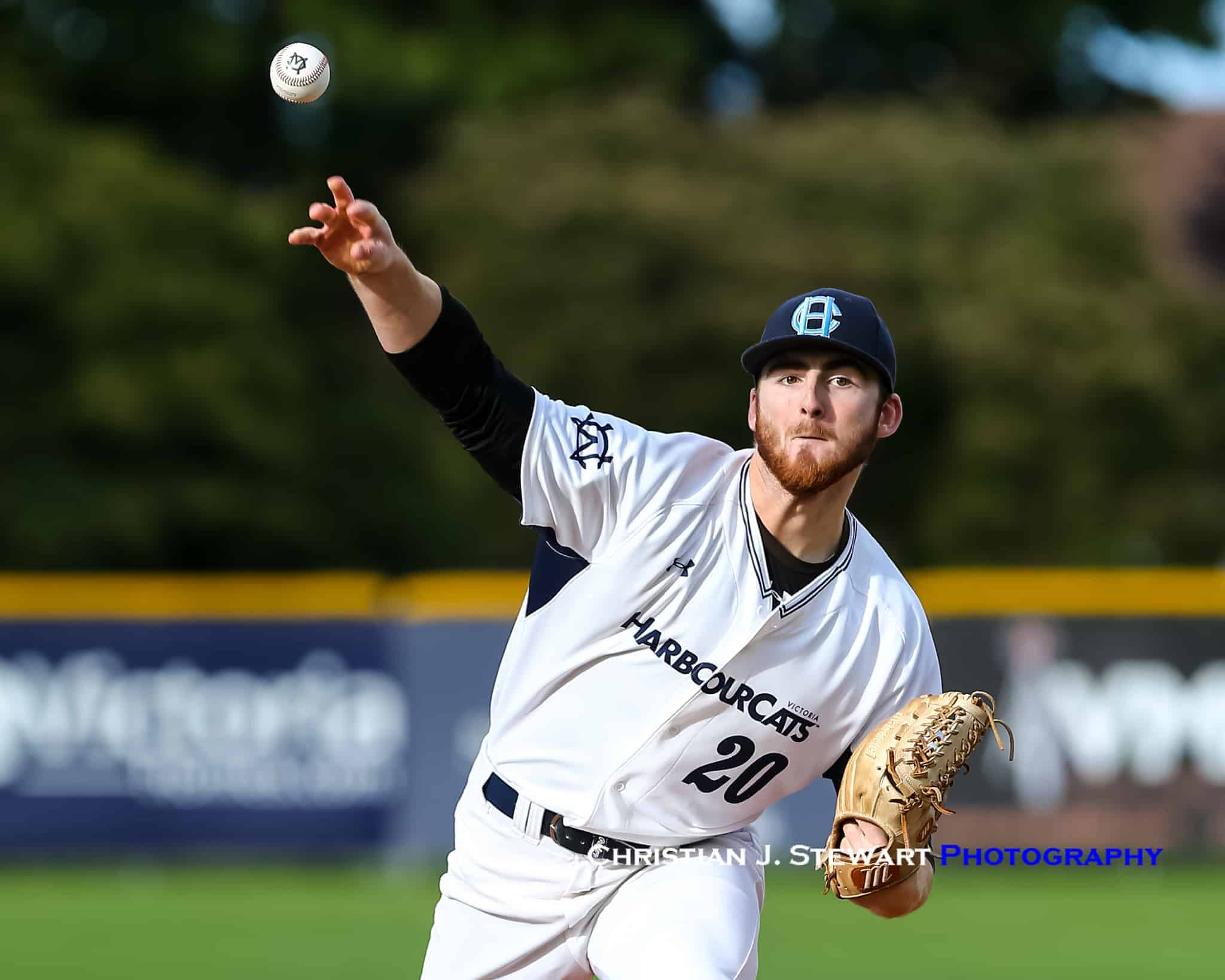 Victoria’s Garrett Goodall, went five full innings, giving up just one run on six hits while striking out six and walking just one in the win over Kelowna Saturday (Photo: Christian J. Stewart)

That six run explosion was highlighted by Miller’s second home run  of the evening, a grand slam that bounced off the top rail of the right field fence and sent the 3,135 fans out of their seats to applaud the offensive fireworks before the actual post-game fireworks that they all enjoyed.

The HarbourCats offensive explosion overshadowed a great start by the HarbourCats pitcher Garrett Goodall, who went five full innings, giving up just one run on six hits while striking out six and walking just one.  Goodall was supported in relief by four different pitchers inculding Tyler Yoshihara who went the final two innings, striking out five and who now has not surrendered a run in 14.1 innings of work so far this year. 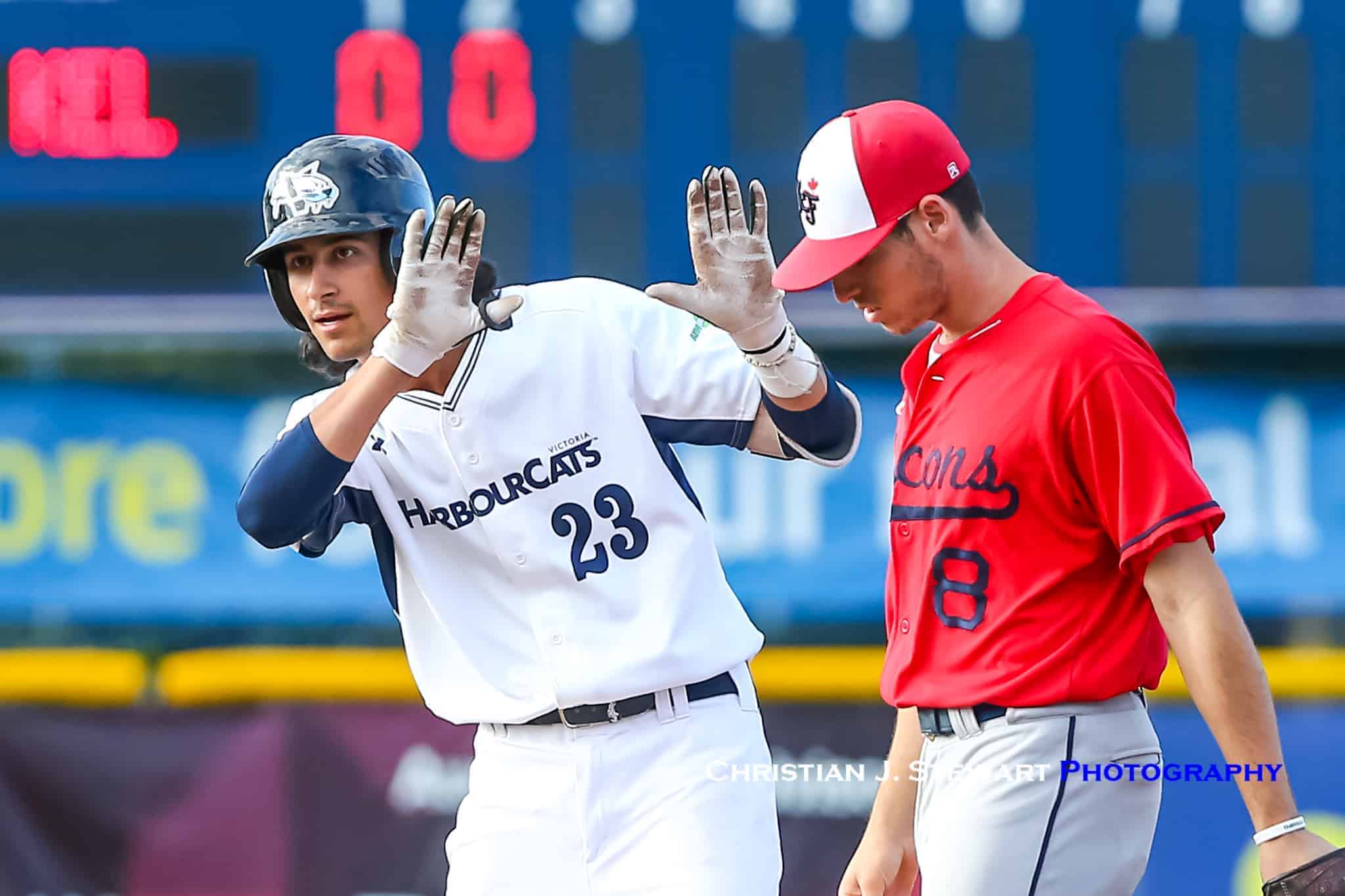 Nick Plaia does a jig after doubling in the game Saturday (Photo: Christian J. Stewart)

Miller’s night also overshadowed that of leadoff hitter Plaia who had three hits, with a home run, triple and double, three walks, four runs scored and three RBI, as well as that of Dustin Demeter who had a three-hit night with a double and an RBI. 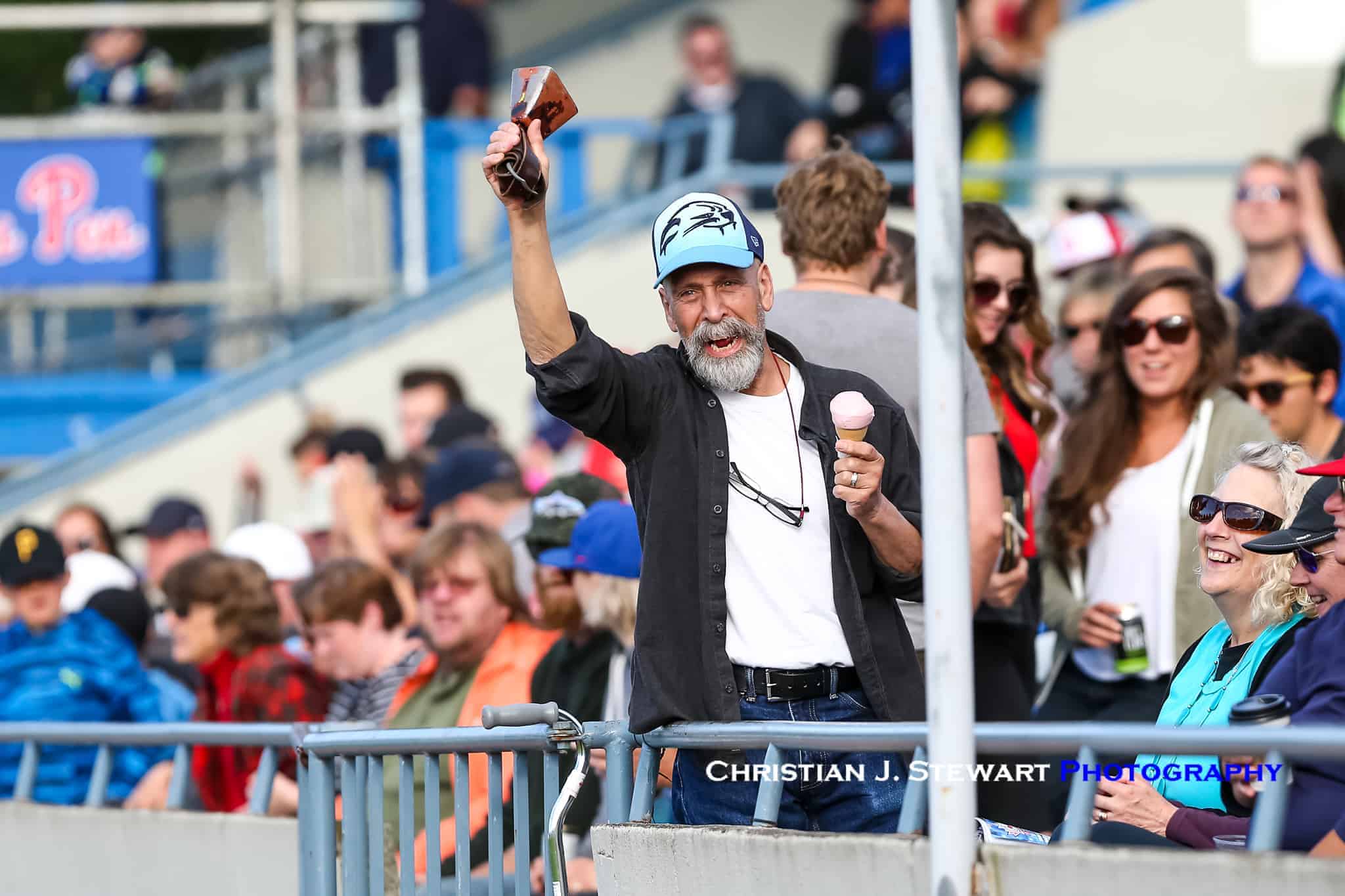 The HarbourCats welcomed back long time fan Jack Gamble Saturday who had missed a few games this season due to hip surgery (Photo: Christian J. Stewart)

For the Falcons, Dan Pruitt led their seven-run and 12 hit attack with three hits, a walk and three runs scored, while Tyler Nixon had two hits, with a double and two-RBI.

With the win the HarbourCats snapped the Falcons seven game win streak, and set up a series rubber-match on Canada Day tomorrow afternoon at 1:05pm. Be sure to wear your red and white on Canada’s 151st birthday, as Tyler Hilton will get the start in the Sunday matinee.