August 6, 2016, Victoria, BC (ISN) – The Victoria HarbourCats have tied the West Coast League (WCL) record of 39 wins in a season after a home run and four-RBI night from Tommy Jew (pictured above) helped lead them to a 6-2 victory over the Yakima Valley Pippins Saturday night in front of 4,976 fans at Royal Athletic Park in Victoria.

The win, matching that of the 2011 Wenatchee AppleSox, was the highlight of a night that had a little bit of everything, including a pre-game ceremony that saw three new players – Griffin Andreychuk, Austin Dondanville and AJ Alcantara – enshrined in the HarbourCats “Ring of Honour”, joining last year’s inaugural inductee Alex De Goti, parachutists landing on the field unexpectedly mid-game and a fantastic 20-minute fireworks display following the game. 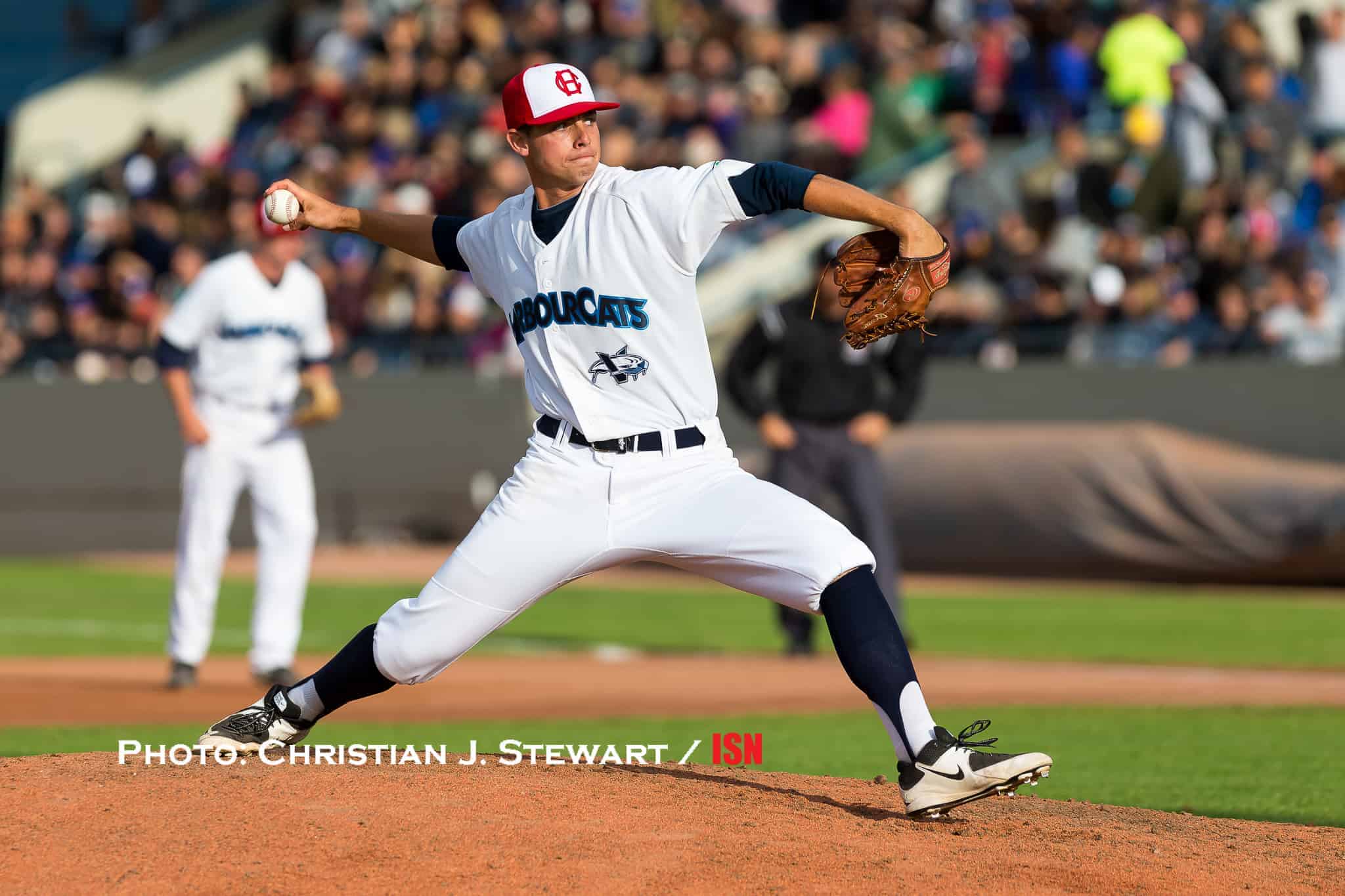 Blake Hannah had his third strong start in a row Saturday, going six innings and giving up two runs on six hits to get the win (Photo: Christian J. Stewart / ISN)

In stark contrast to the 27-hit contest between these two clubs on Friday night, Saturday’s affair began as a tight pitching duel between the HarbourCats Blake Hannah and the Pippin’s Ryan Garcia who both held their respective opponents scoreless through the first three innings. 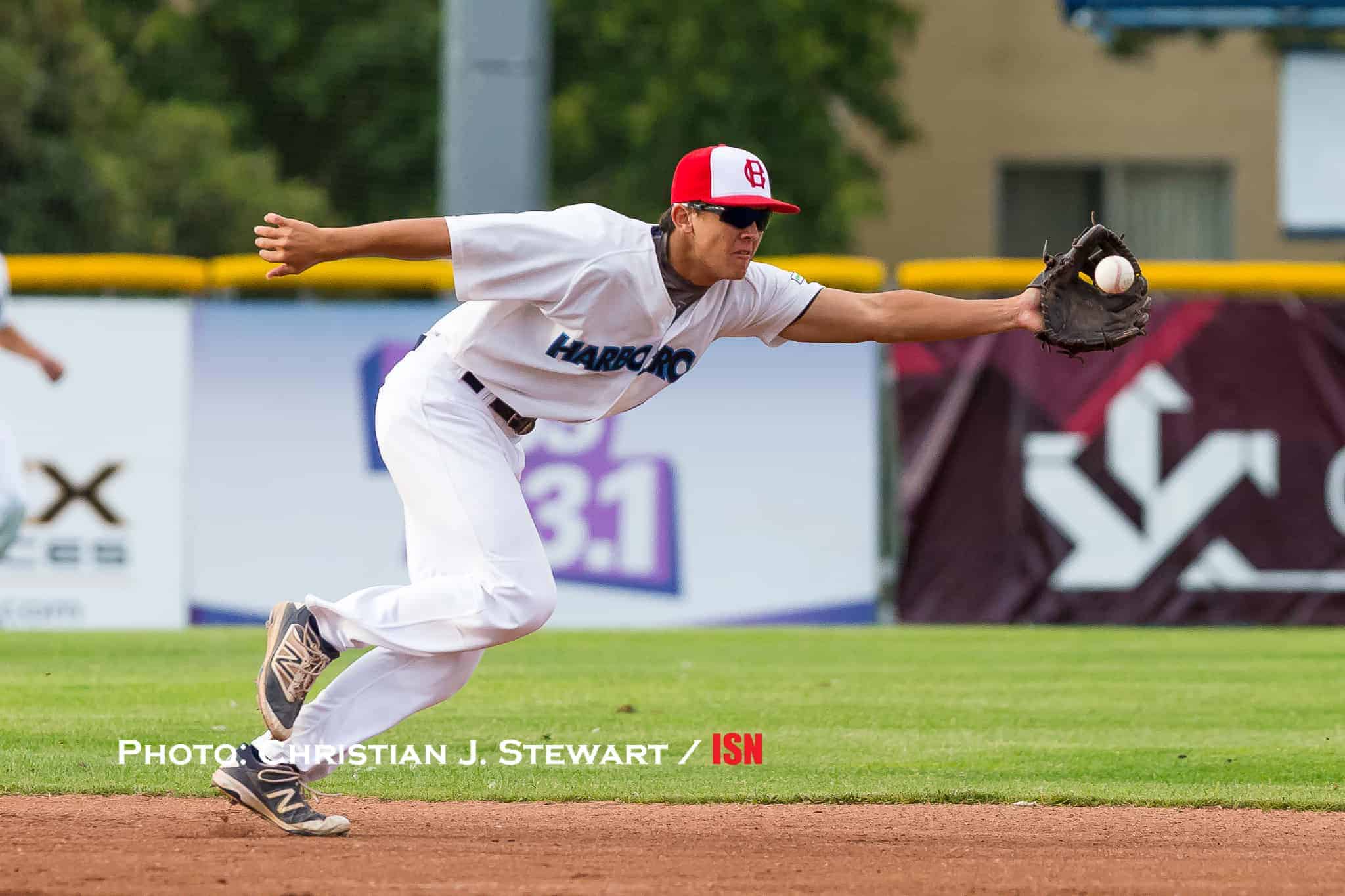 While he could not quite get to this ground ball, the defensive play of Tommy Jew at shortstop has been outstanding of late (Photo: Christian J. Stewart / ISN)

The HarbourCats finally broke through in the bottom of the fourth, thanks in part to an error on the part of the Pippins that allowed PJ Floyd to reach, but also a key, two-out, two-RBI double from Jew that scored Griffin Andreychuk (hit by pitch) and Floyd.  Jew would then come in to score on a squeeze bunt by Matt Lautz to give the HarbourCats a 3-0 lead. 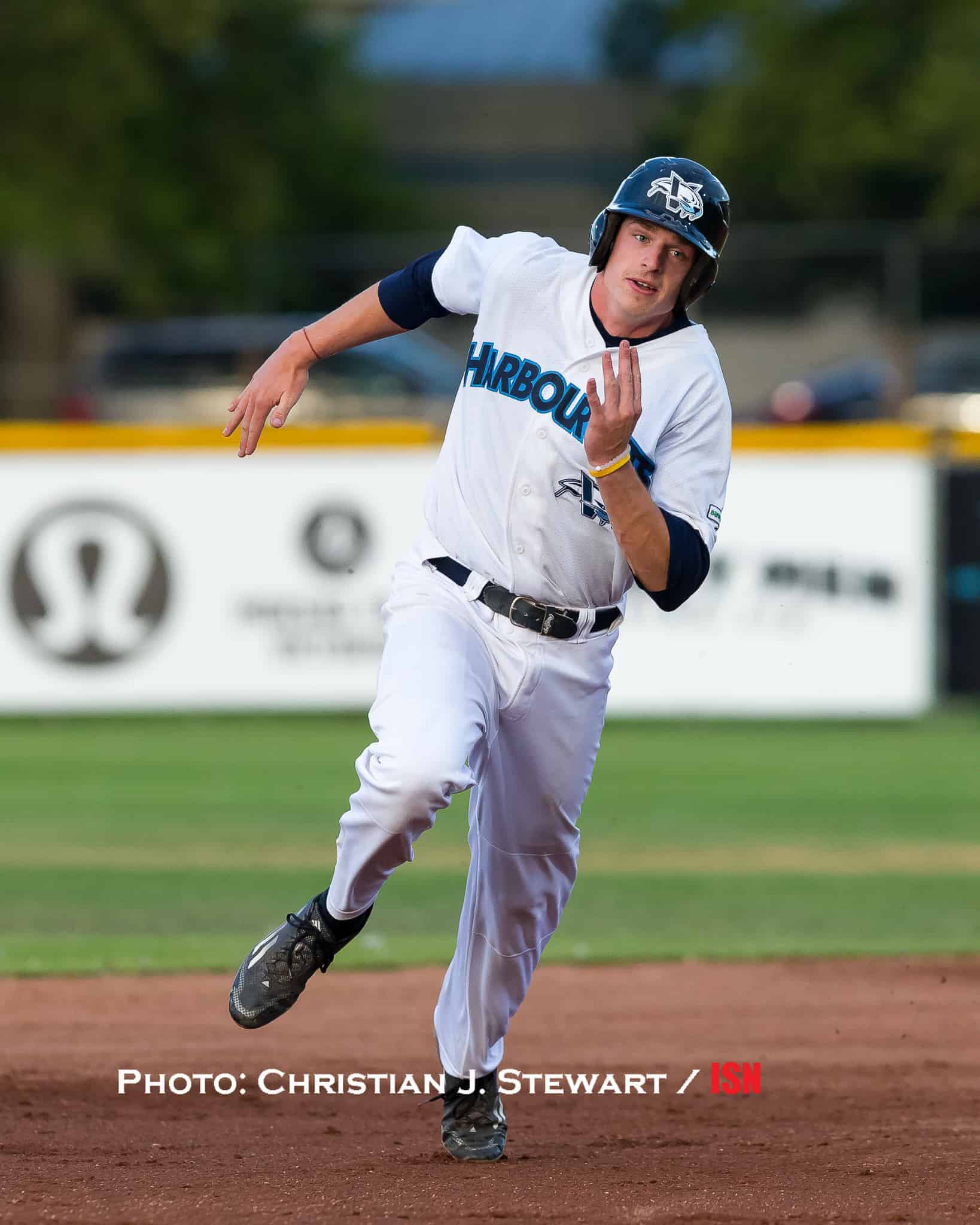 The Pippins would eventually get to Hannah for a pair of runs in the top of the sixth, thanks to back-to-back doubles from Christian Koss and Freddie Smith, a single from Jay Schuyler and a sacrifice fly from Ryan Garcia cutting the ‘Cats lead to 3-2.

The HarbourCats would then turn the ball over to Greg Casper and after he cruised through the seventh and eighth unscathed – with a slight delay at one point thanks to the arrival of the parachutists – the HarbourCats put the game on ice with three more runs in the bottom of the eighth, courtesy of a double from Ryan Anderson, a triple from PJ Floyd and a two run-home run by Jew, his second hit and fourth RBI of the night. 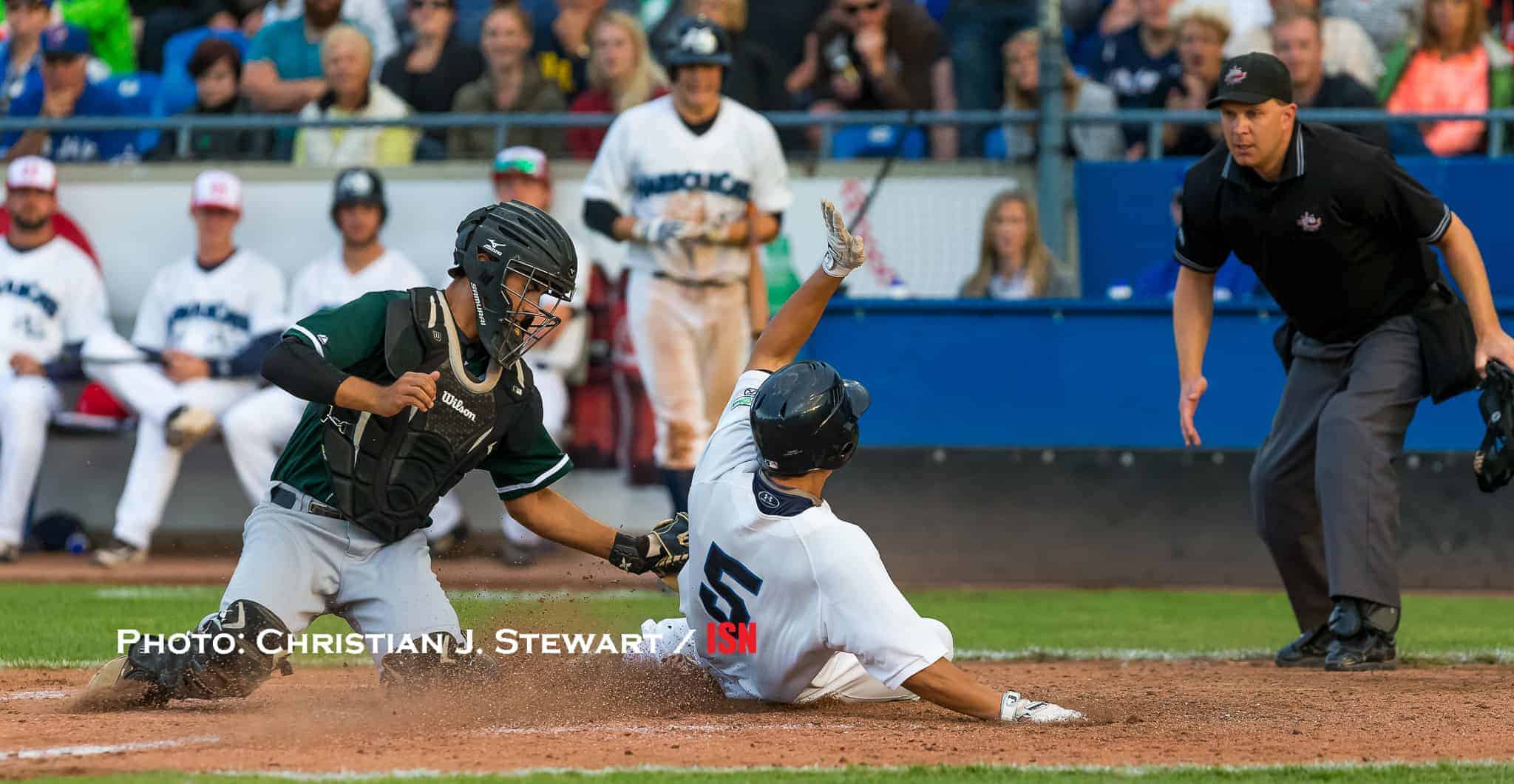 Tommy Jew (5) slides home safely with the HarbourCats third run of the game in the bottom of the fourth inning Saturday (Photo: Christian J. Stewart / ISN)

Holden Lyons then came on for the ninth and after he allowed a lead-off double to Trevor Achenbach, he would settle down to strike out Michael Filia, get a grounder to second by Ryan McCarty and then struck out Colton Kelly to end the game and give the ‘Cats their record tying 39th win of the season.

With his two hits and four RBIs, Tommy Jew was the offensive force for the ‘Cats, while Ryan Anderson and Hayden Jaco both contributed a pair-of hits on the evening.   PJ Floyd, with his triple and RBI also scored a pair of runs. 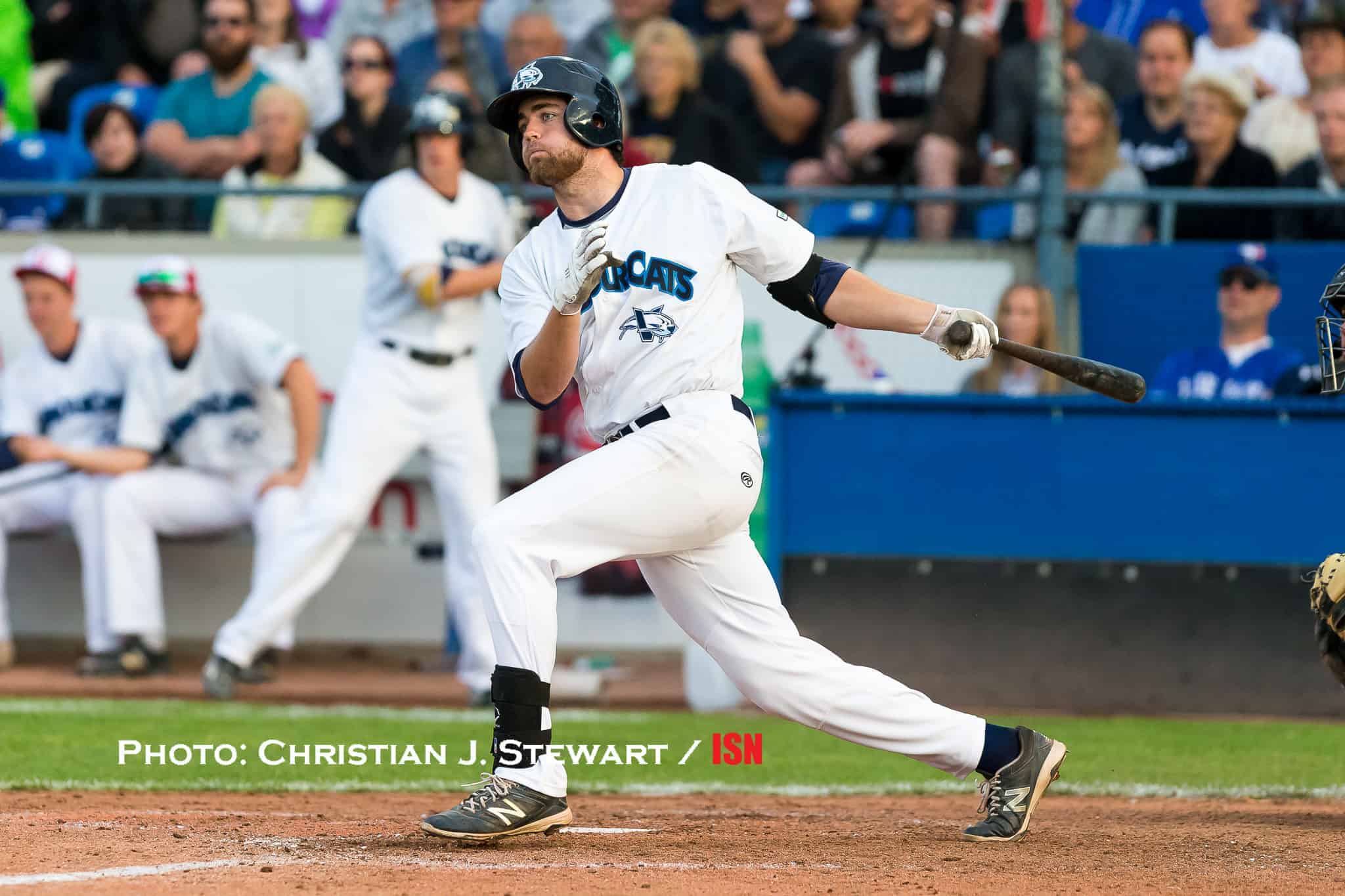 Ryan Anderson continues to swing a hot bat and he had another two hits on Saturday in the win over Yakima (Photo: Christian J. Stewart / ISN)

On the mound, Hannah takes the win with his third strong start in a row, going six innings and allowing two runs on six hits, walking just one and striking out five.  Garcia takes the loss for the Pippins.

The HarbourCats and Pippins close out the regular season with an afternoon matinee Sunday at 1:00 PM.  Incoming UCLA freshman Kyle Mora gets the start for the ‘Cats in that one.  The HarbourCats then hit the road to Bellingham on Tuesday for Game 1 of the North Divisional Series against the Bells.  The Bells clinched a playoff berth last night with a 4-3 win over Wenatachee.  Victoria then returns home Wednesday night for the first playoff game at this level in almost 50 years, as they host the Bells in Game 2 of the series.  Game three if needed happens on Wednesday.

Leave a reply Click here to cancel the reply