Victoria’s Harry Shipley gets high fives after scoring one of the HarbourCats four runs on Monday (Photo: Christian J. Stewart)

June 12, 2017, Victoria, BC – The Victoria HarbourCats and Port Angeles Lefties went at it in round two of the Battle of the Strait of Juan deFuca on Monday night and it was the HarbourCats who struck the winning salvo once again, with a 4-1 win over the Lefties in West Coast League Action at Royal Athletic Park in Victoria.

The win was the second of the season for the ‘Cats over the Lefties, after they took the opening game of the season by a score of 11-2 in Port Angeles on June 1. 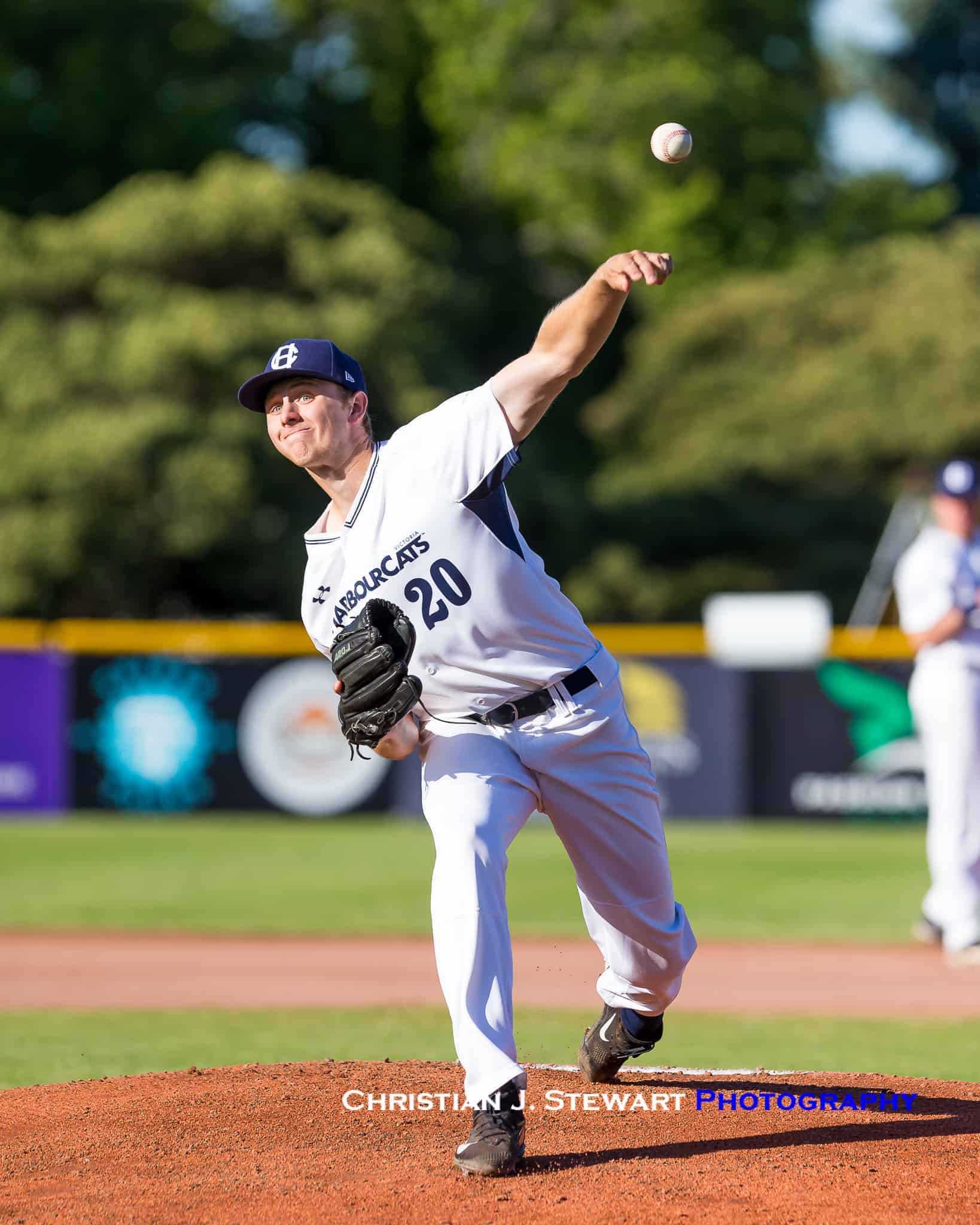 The HarbourCats AJ Block improved to 2-0 on the season with a 4-1 win over Port Angeles on Monday. Block went five scoreless innings, giving up just a single hit and striking out four (Photo: Christian J. Stewart)

The game was a lot closer than it probably should have been, as the HarbourCats Cats had assembled eight hits off Port Angeles starter Keiran Shaw through first four innings, but managed just a single run in the second – an RBI single from Bryce Bonner that scored Ethan Lopez – and the Lefties used some good early defence, turning double plays in the second and third and cutting another runner down at the plate in the fourth, to keep the score 1-0. 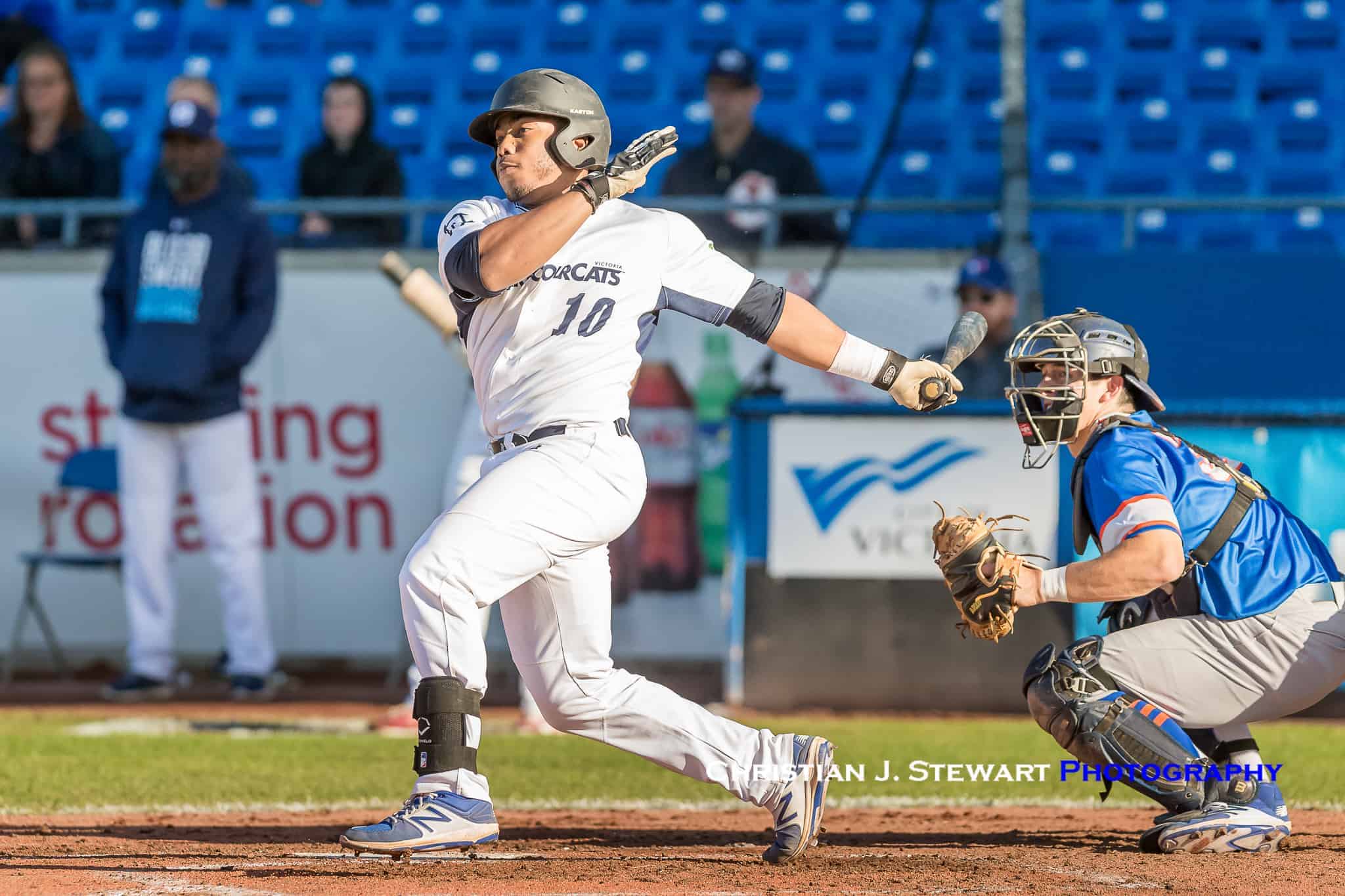 Victoria’s Bryce Bonner had a pair of hits Monday including this RBI single in the second inning that gave the HarbourCats a 1-0 lead (Photo: Christian J. Stewart)

The ‘Cats added another run in the seventh on a Kevin Collard sacrifice fly that scored Harry Shipley, but the Lefties would answer that in the top of the eighth when an RBI double from Mitchell Hagan off ‘Cats reliever Travis Kuhn scored Kevin Kendall to keep the deficit at just one. 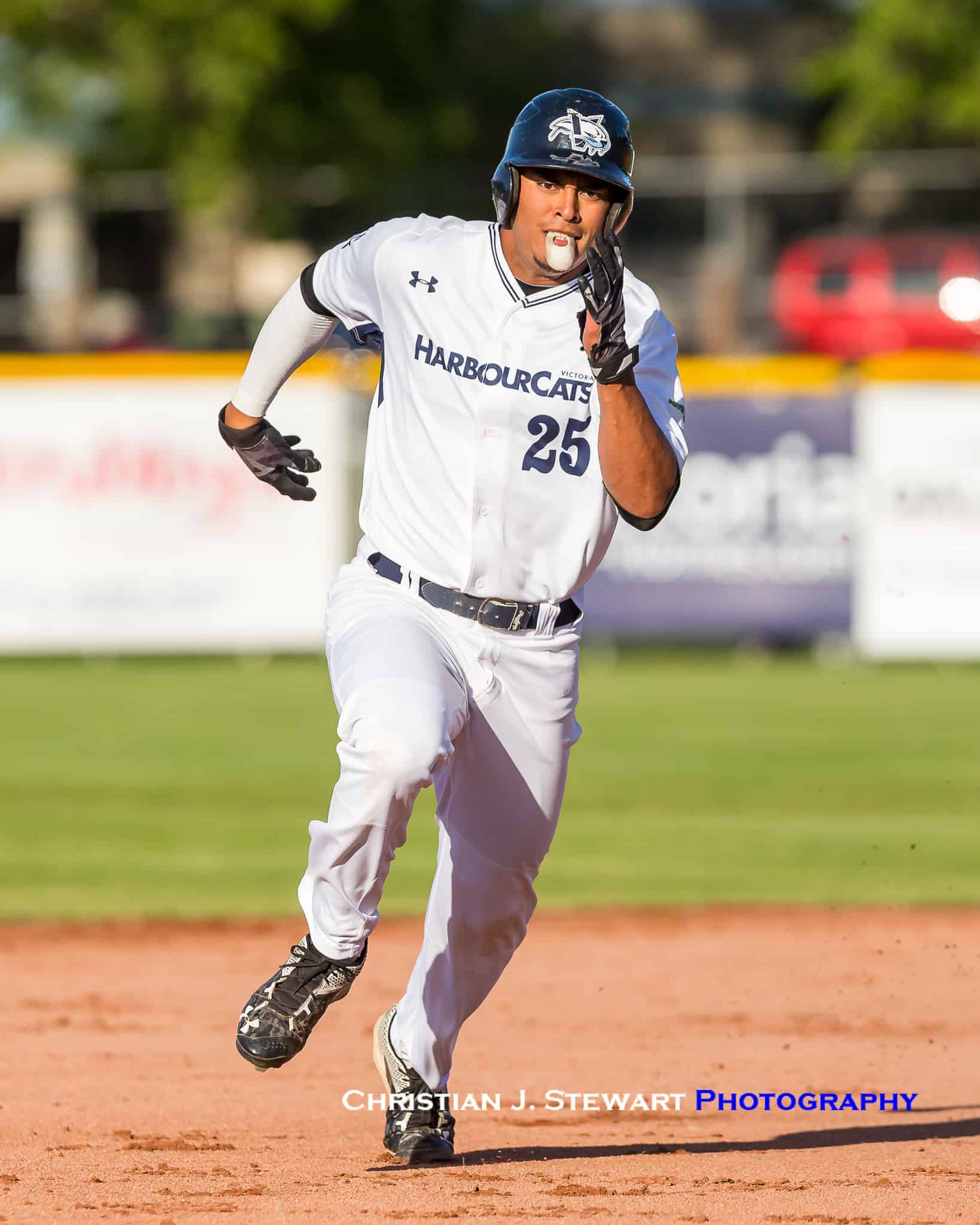 What chance the Lefties had to pull the win out of the bag disappeared in the bottom of the eighth, as Lefties reliever Jared Welander hit Kekai Rios to begin the inning and then after a pair of strikeouts, walked the bases loaded and then gave up a walk to Will LaRue and hit Harry Shipley to give the HarbourCats two more big insurance runs.

Kuhn then came on for the ninth and closed out the 4-1 win. 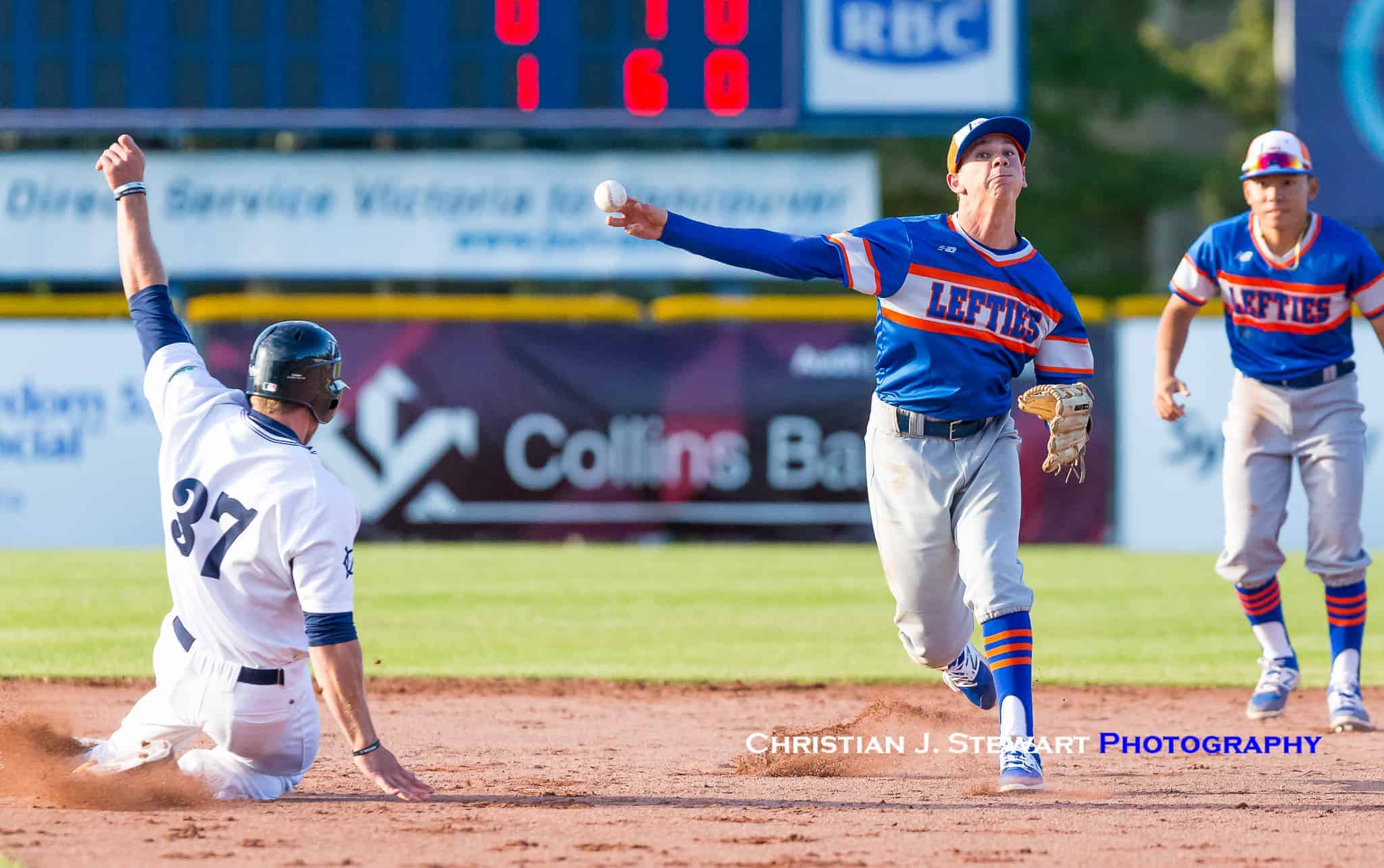 AJ Block gets the win for the HarbourCats, his second of the season, as he had another strong outing, going five innings and giving up no runs on just one hit while striking out four.  Taylor Prokopis came on in relief in the sixth and pitched two scoreless innings to set things up  for Kuhn who earns the save. 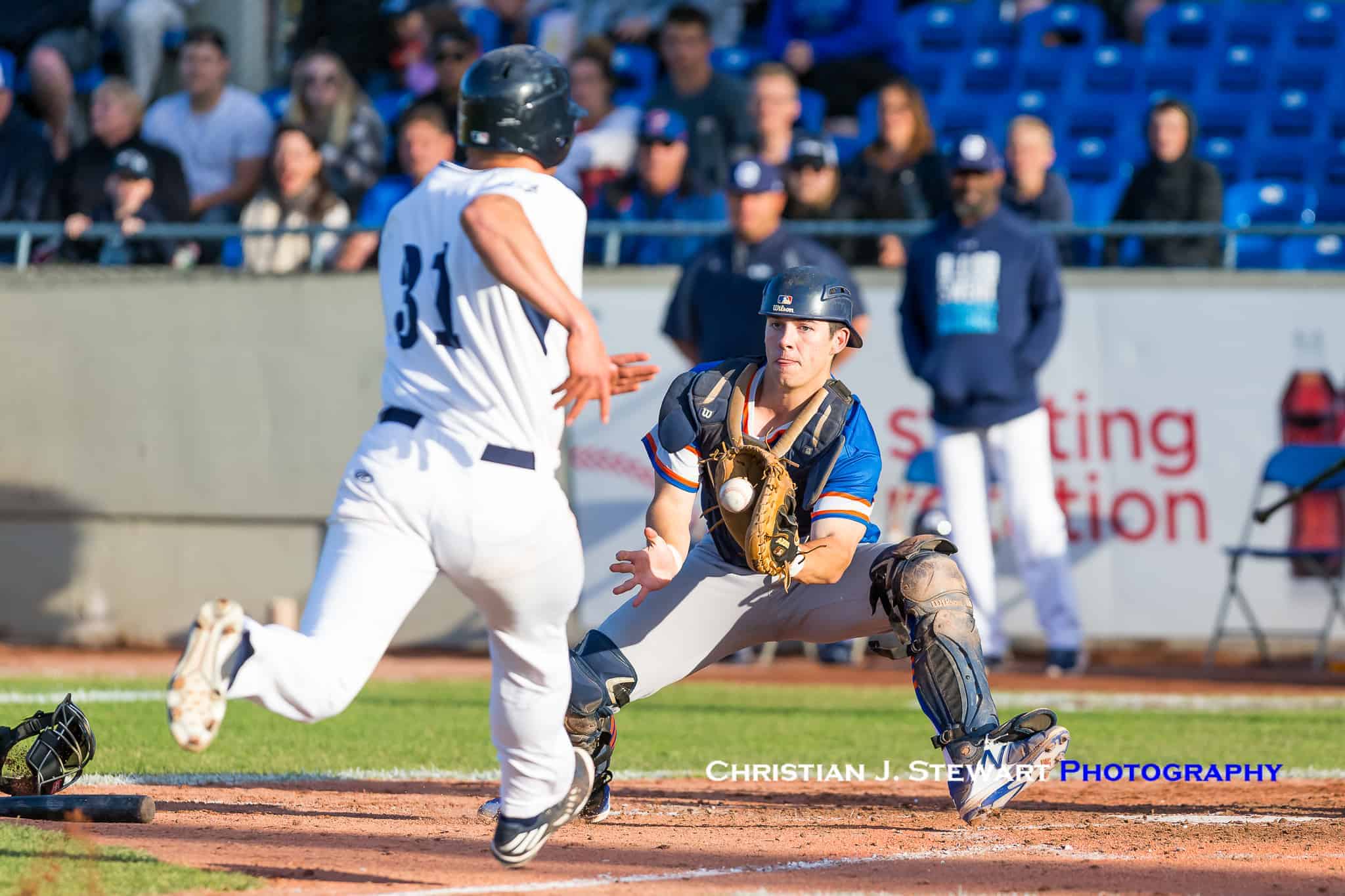 Lefties catcher Benny Kaleiwahea makes the catch prior to tagging out Victoria’s Riley Zayicek on this play at the plate in the fourth inning Monday (Photo: Christian J. Stewart)

Offensively, Cole Weiss led the way with a three-hit evening, while Collard and Bonner chipped in two hits and an RBI each.  Shipley also added a hit and an RBI. 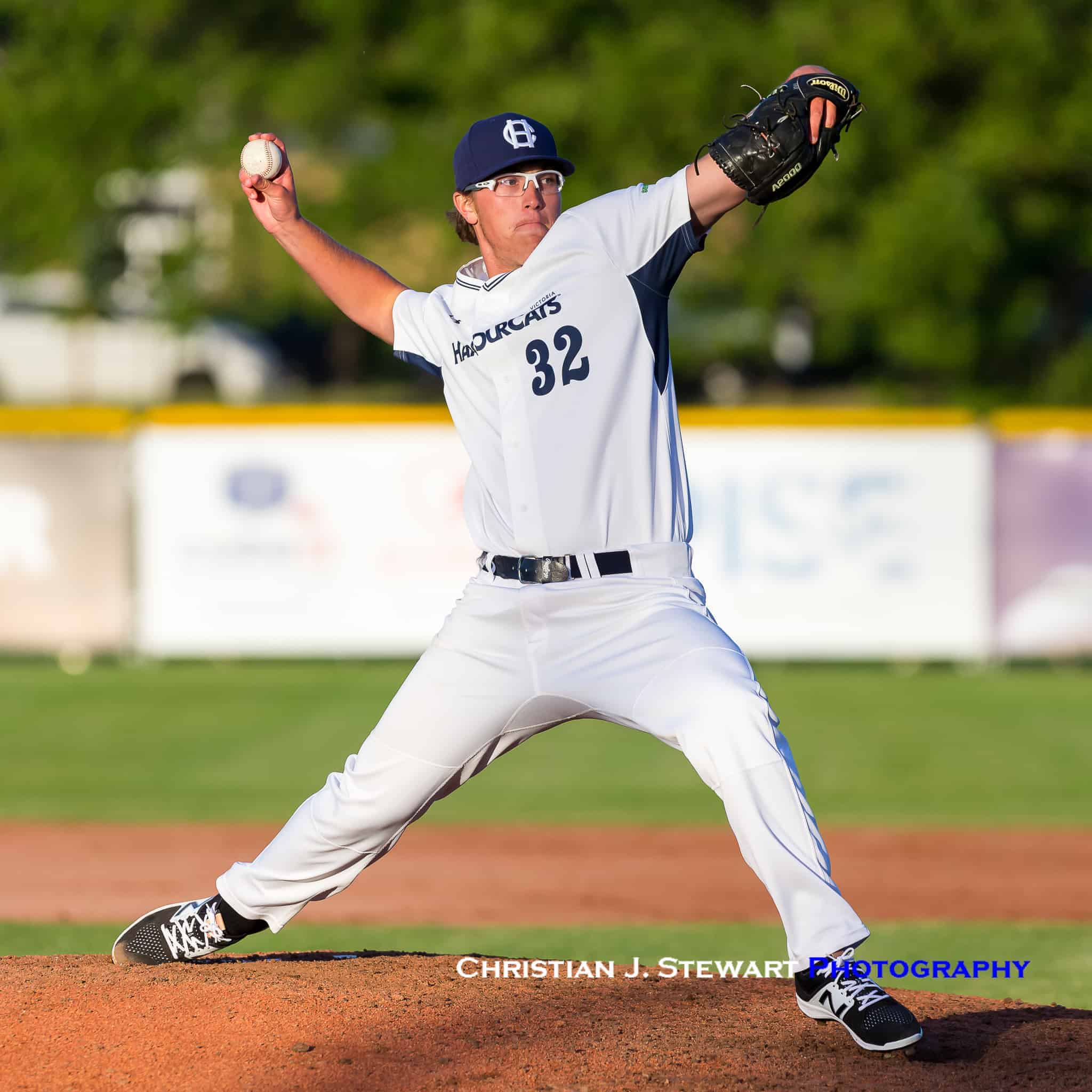 The HarbourCats Taylor Prokopis threw two more scoreless innings against the Lefties, moving his total to seven scoreless in three appearances thus far this season out of the pen (Photo: Christian J. Stewart)

The win moves the HarbourCats record to 6-5 on the season and into a three-way tie for first in the extremely tight North Division with the Kelowna Falcons and Wenatchee AppleSox.  The Lefties fall to 5-6 and sit one game back of the Division lead. 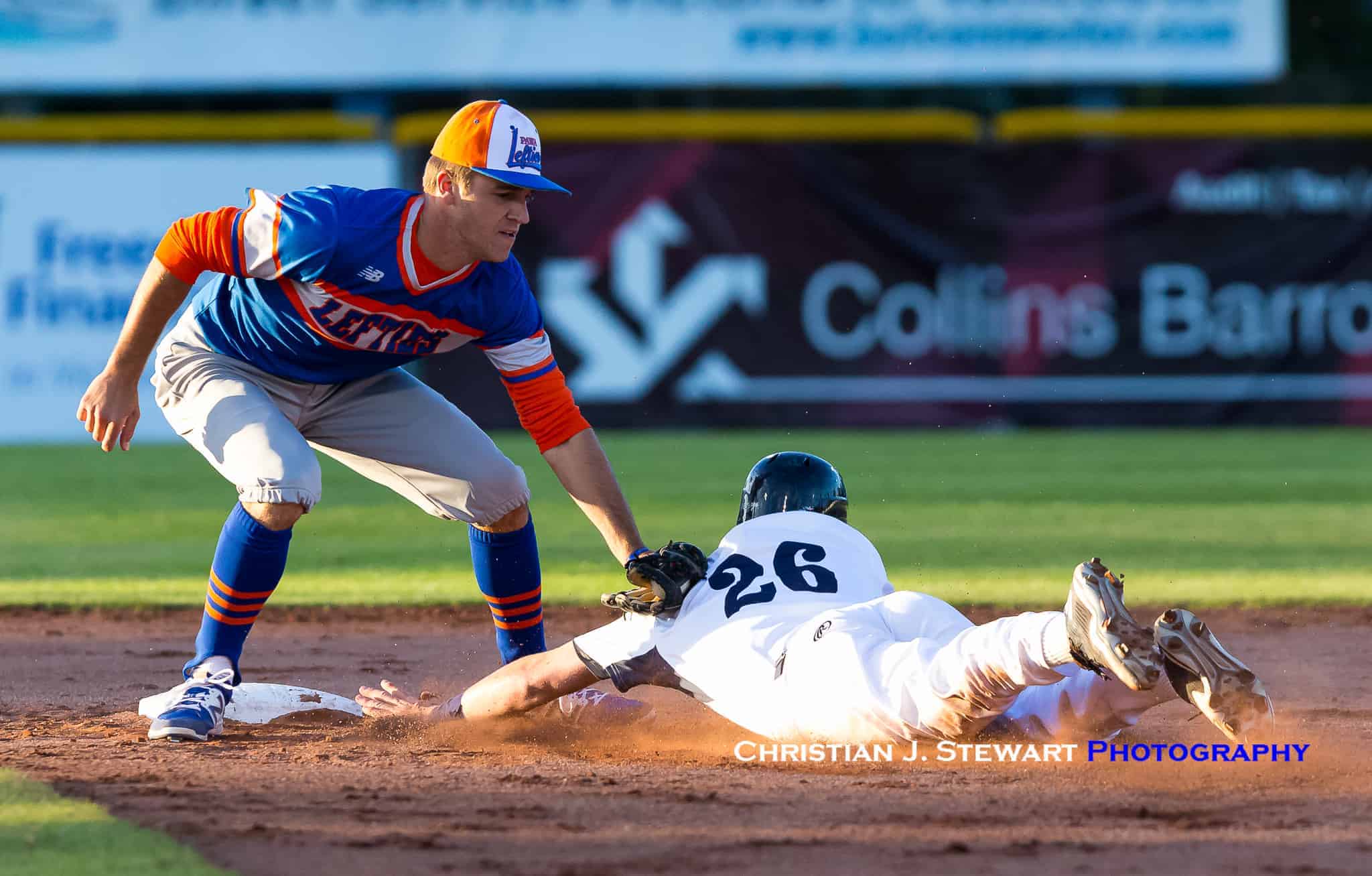 The teams return to action at Royal Athletic Park on Tuesday night to complete the short, two-game home stand for the HarbourCats.  Victoria then hits the road to Walla Walla, Washington on Wednesday for a three-game set against the Sweets. They return home on Father’s Day, Sunday June 18 where they will play a non-league double-header against the Kitsap Blue Jackets beginning at 12:35.  Lefty knuckleballer Claire Eccles is slated to start the first game on Sunday, so be sure to get your tickets early to come see her make her first official start of the season. 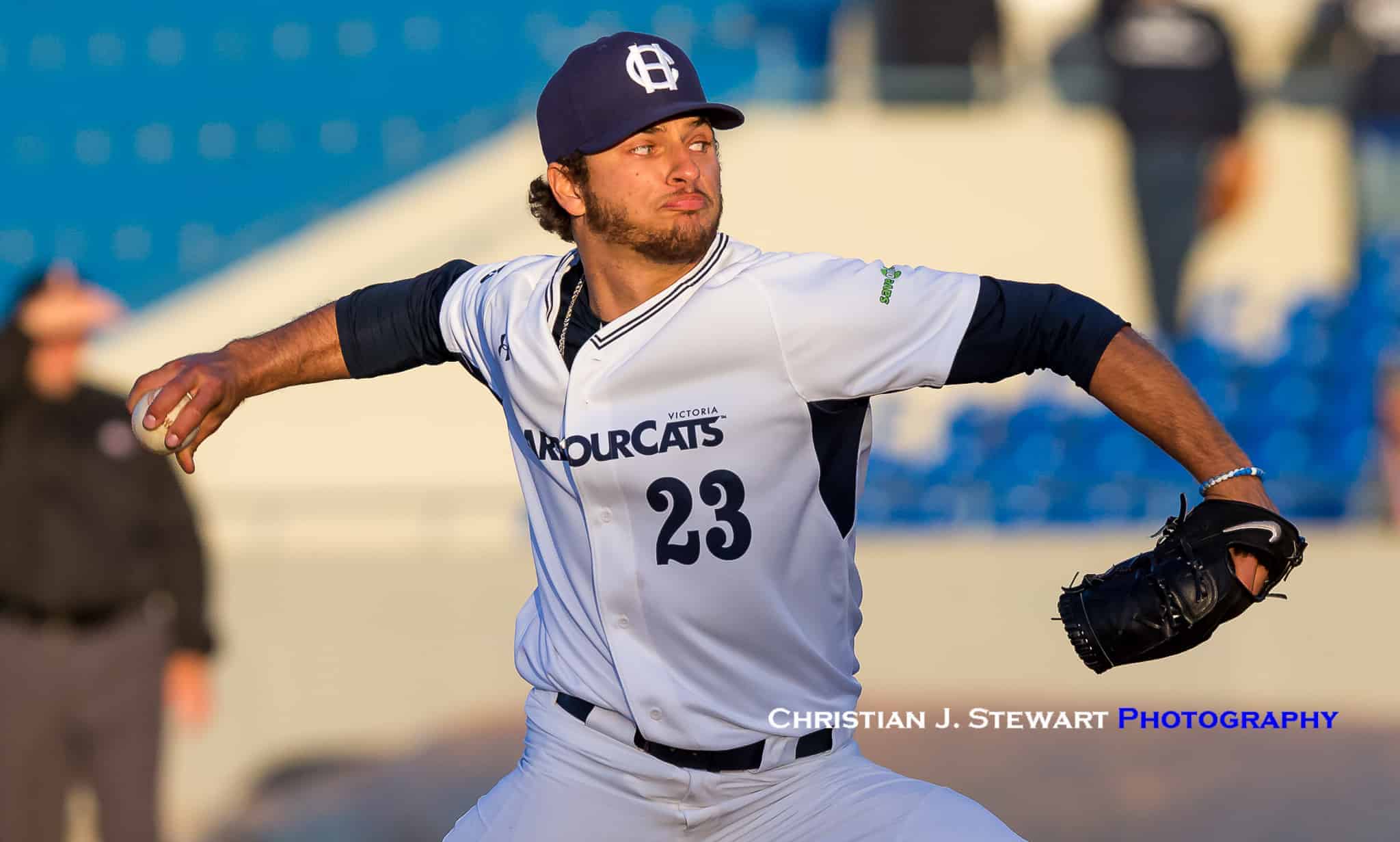 Travis Kuhn gave up a run in the eighth, but then shut the Lefties down in the ninth to get the save in Victoria’s 4-1 win Monday (Photo: Christian J. Stewart)