July 3, 2017, Victoria, BC – The Victoria HarbourCats used a six-run seventh inning that included home runs from Kevin Collard and Tucker Johnson, to break open a close game and cruise on to a 15-4 win over the Victoria Mavericks in a non-league exhibition game Monday evening at Royal Athletic Park in Victoria. 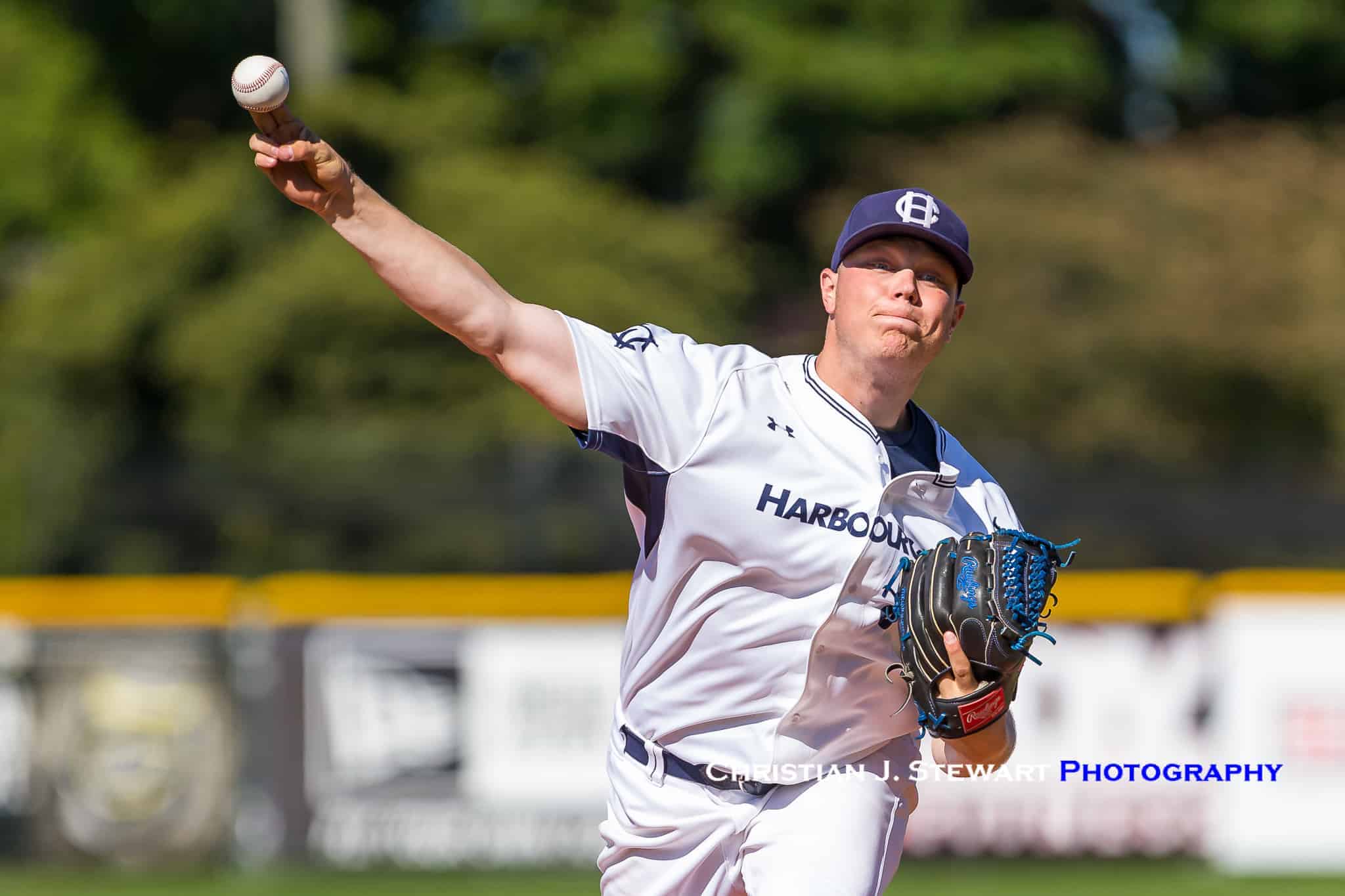 The HarbourCats Ethan Skuija got the start and went 4 innings against the Mavericks, giving up three runs on a pair of hits (Photo: Christian J. Stewart)

LHP Claire Eccles was to start the game on the mound, but a foot injury suffered in her last outing led to a late pre-game decision to hold her out and give another day for treatment. She was struck by a line drive while earning her first WCL win on Thursday. 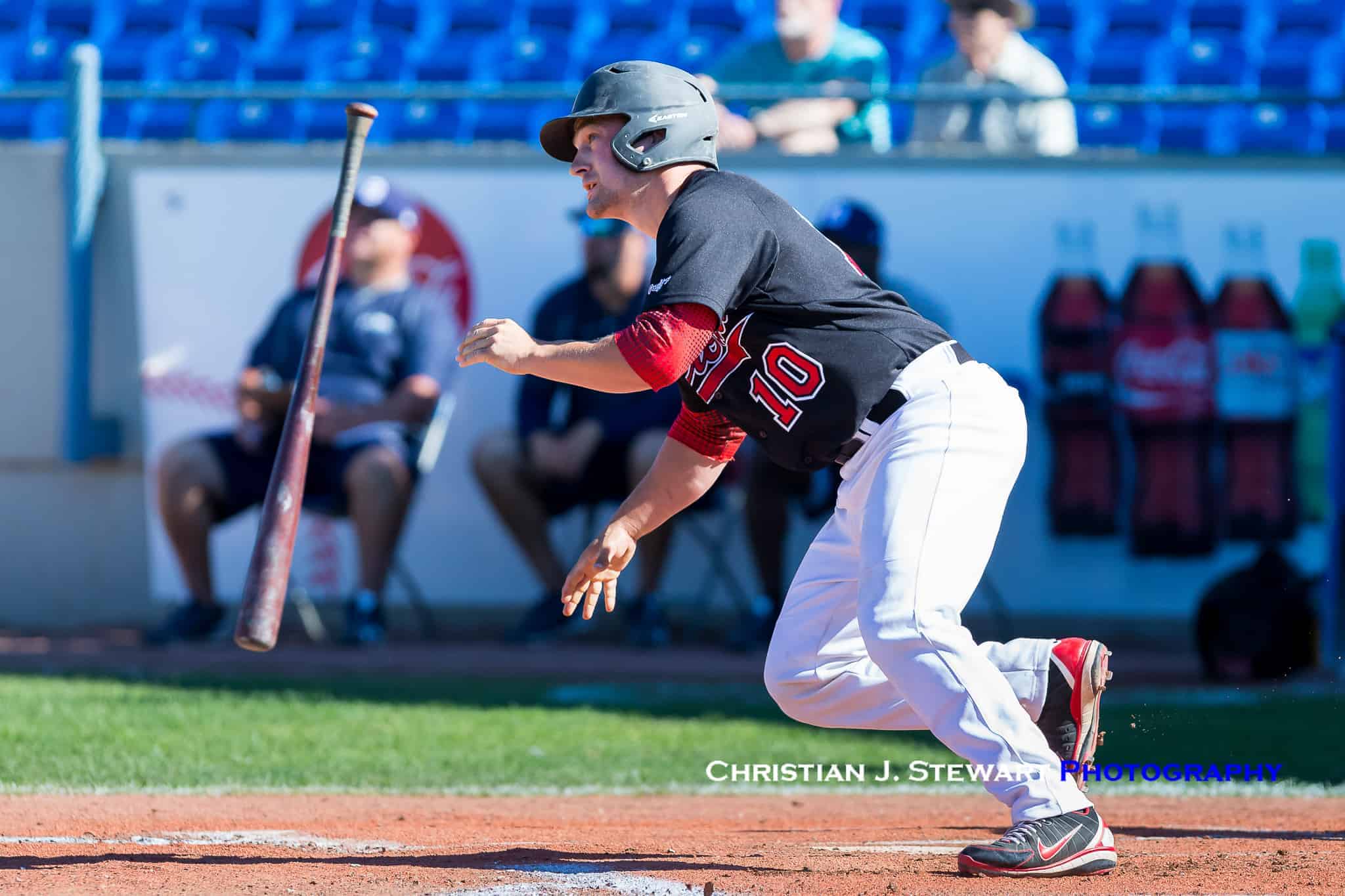 The Mavericks looked to have an edge early in this one as Duncan Blades rocked ‘Cats starter Ethan Skuija for a solo home run in the very first inning and then added runs in each of the third and fourth to hold a 3-1 lead over the HarbourCats heading to the bottom of the the fourth. 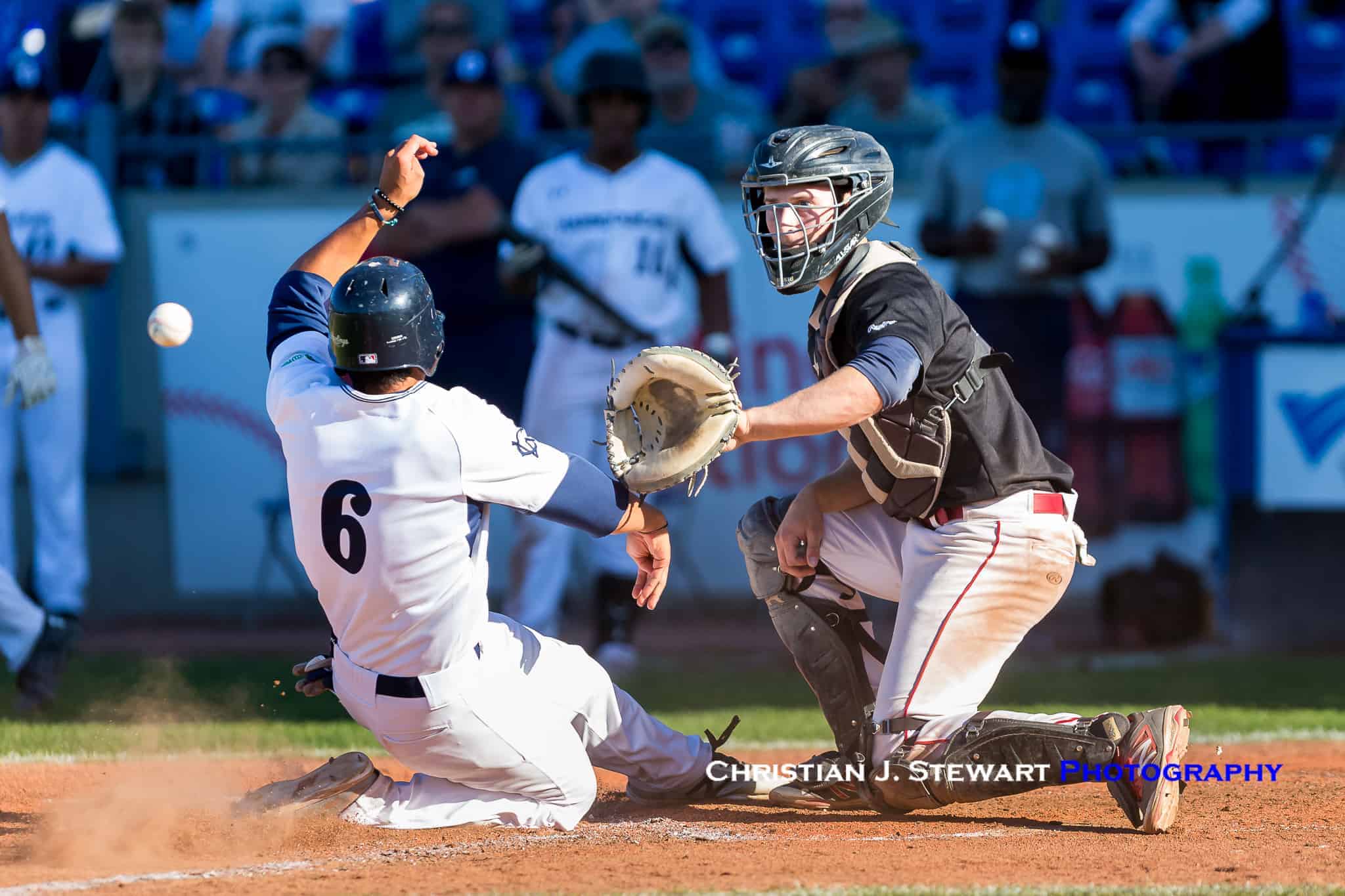 In the home fourth, Victoria would edge ahead 4-3, scoring three thanks in part to RBI singles from Noah Prewett and Johnson that scored Riley Guntrip (walk) and Po-Hao Huang (single). Prewett would later score on a close play at the plate. 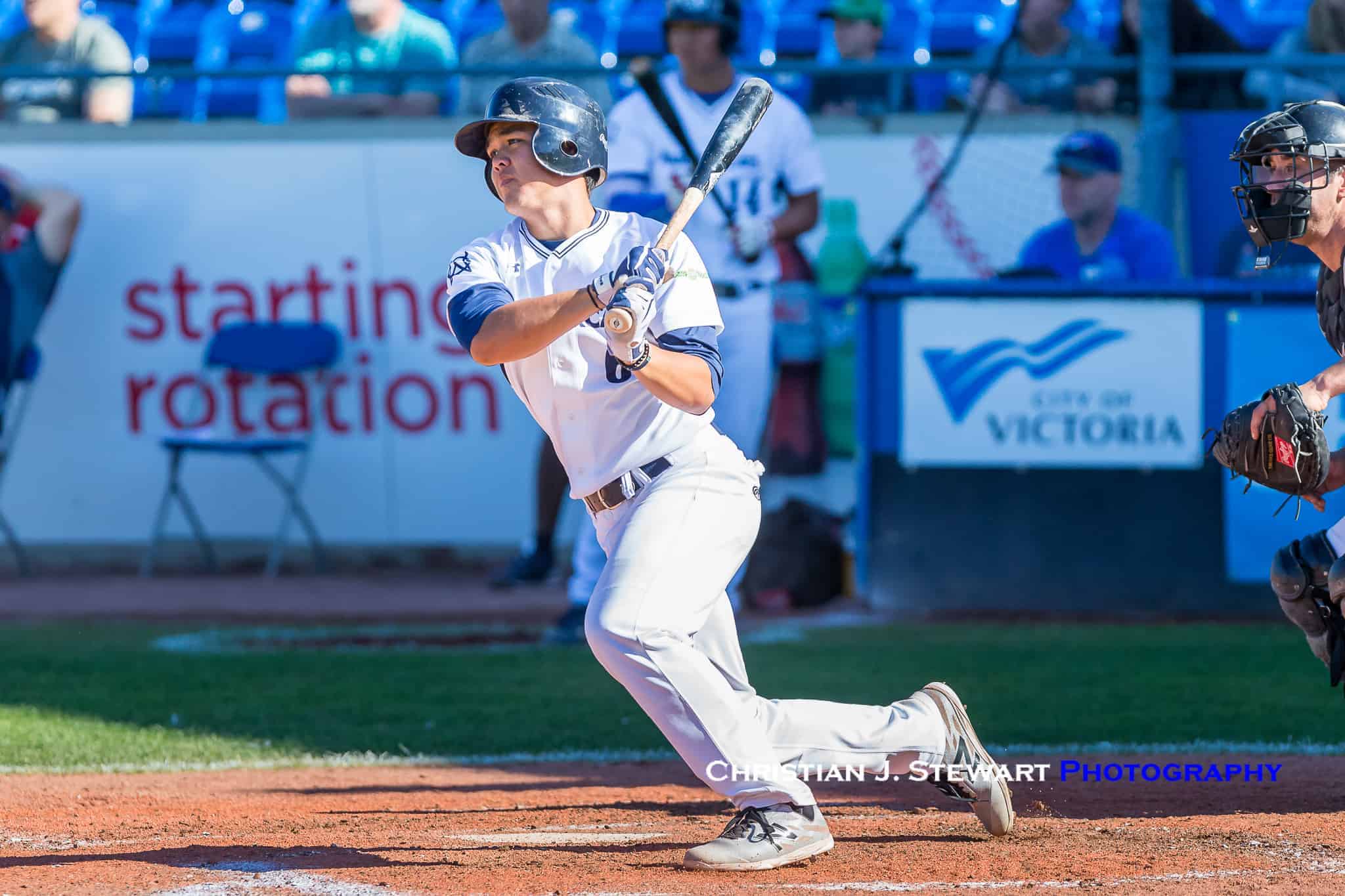 Noah Prewett would have a RBI single and score a run in the fourth inning Monday (Photo: Christian J. Stewart)

The teams would remain scoreless after that until the HarbourCats blew things open with the big sixth inning, highlighted by the three-run shot from Collard and a two-run blast from Johnson.

Three more HarbourCats runs in the bottom of the eighth, put the game away for the home side and they closed out the regulation nine-inning win 13-3. 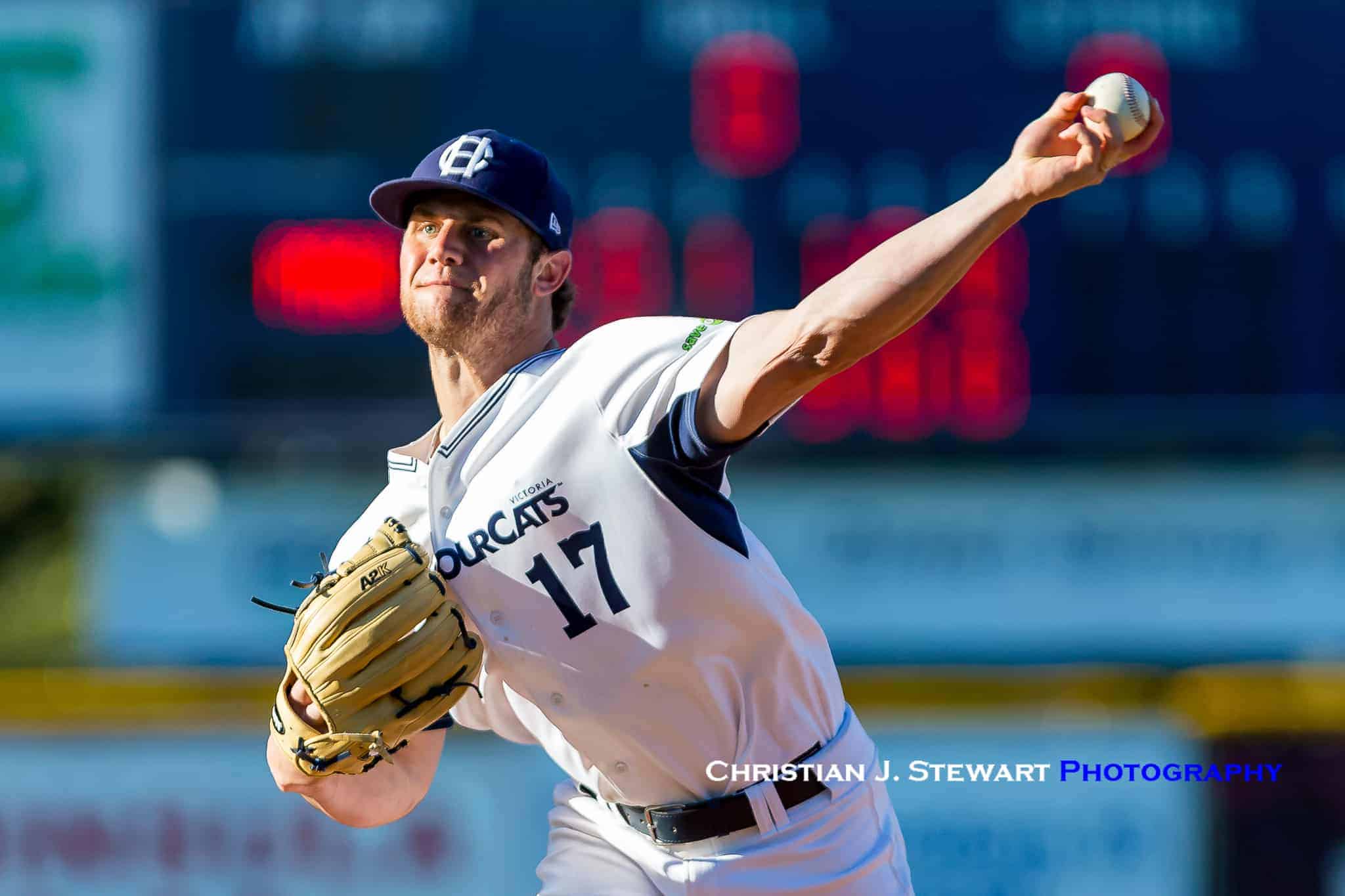 Victoria got their first look at Andrew Shaps on the mound Monday and he impressed, topping 90 MPH on the radar gun and breaking off a nasty curve ball to Maverick hitters (Photo: Christian J. Stewart) 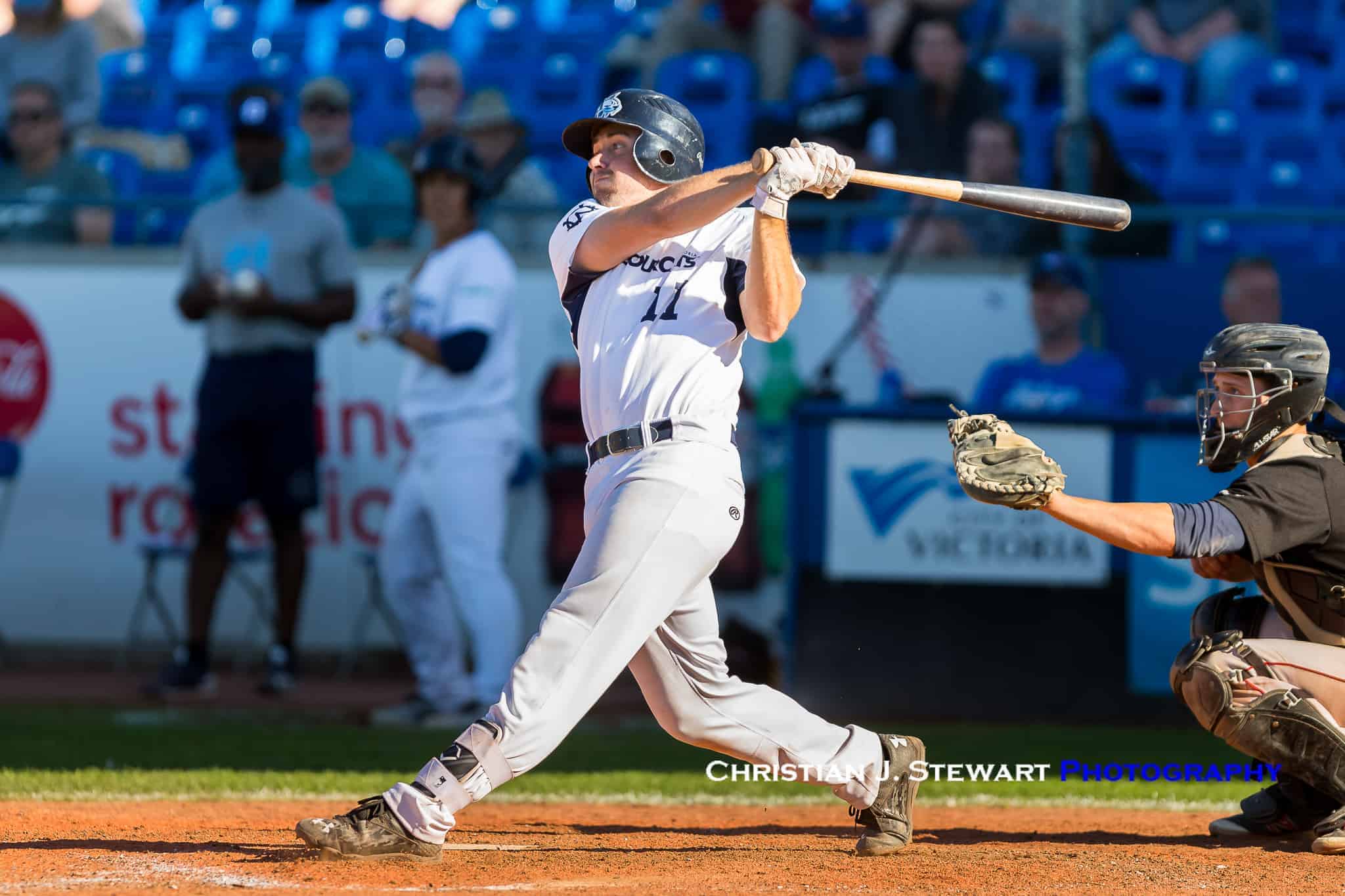 Tucker Johnson would have a three-hit evening, including a two-run home run in the bottom of the seventh (Photo: Christian J. Stewart)

The teams did play an extra three innings of exhibition ball in order to get a few more players involved in the game, with the Mavericks scoring a run in the 10th to make it 13-4 and the HarbourCats’ Bryce Bonner crushing one over the left field netting and on to Pembroke Street in the bottom of the 10th – his third hit of the day – to get that back and up the lead to 14-4.  Tanner Rempel then did the same in the bottom of the 11th to up that to 15-4. 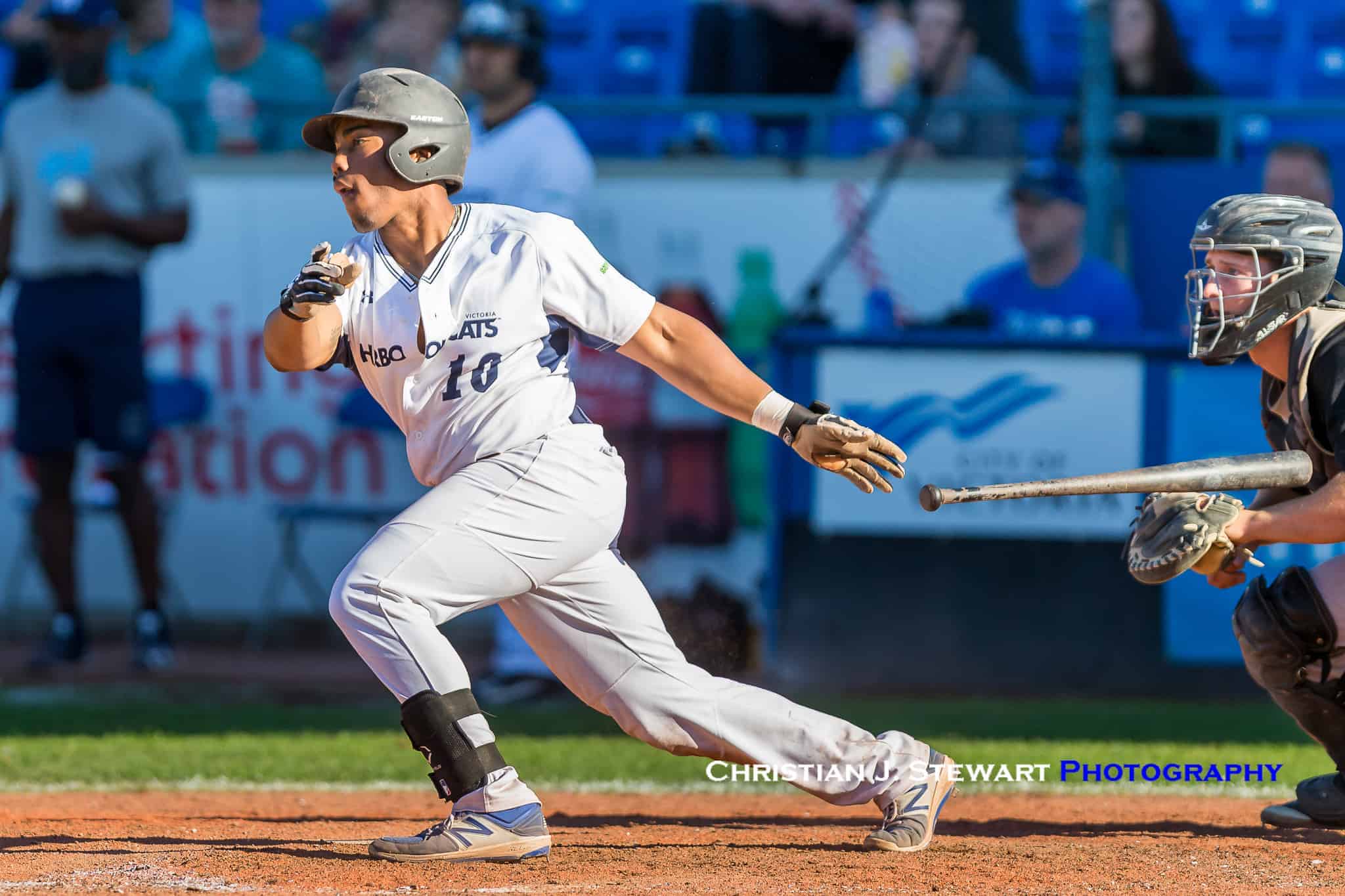 Bryce Bonner would have three hits for the HarbourCats on Monday, including a monster home run over the left field mesh and on to Pembroke Street (Photo: Christian J. Stewart) 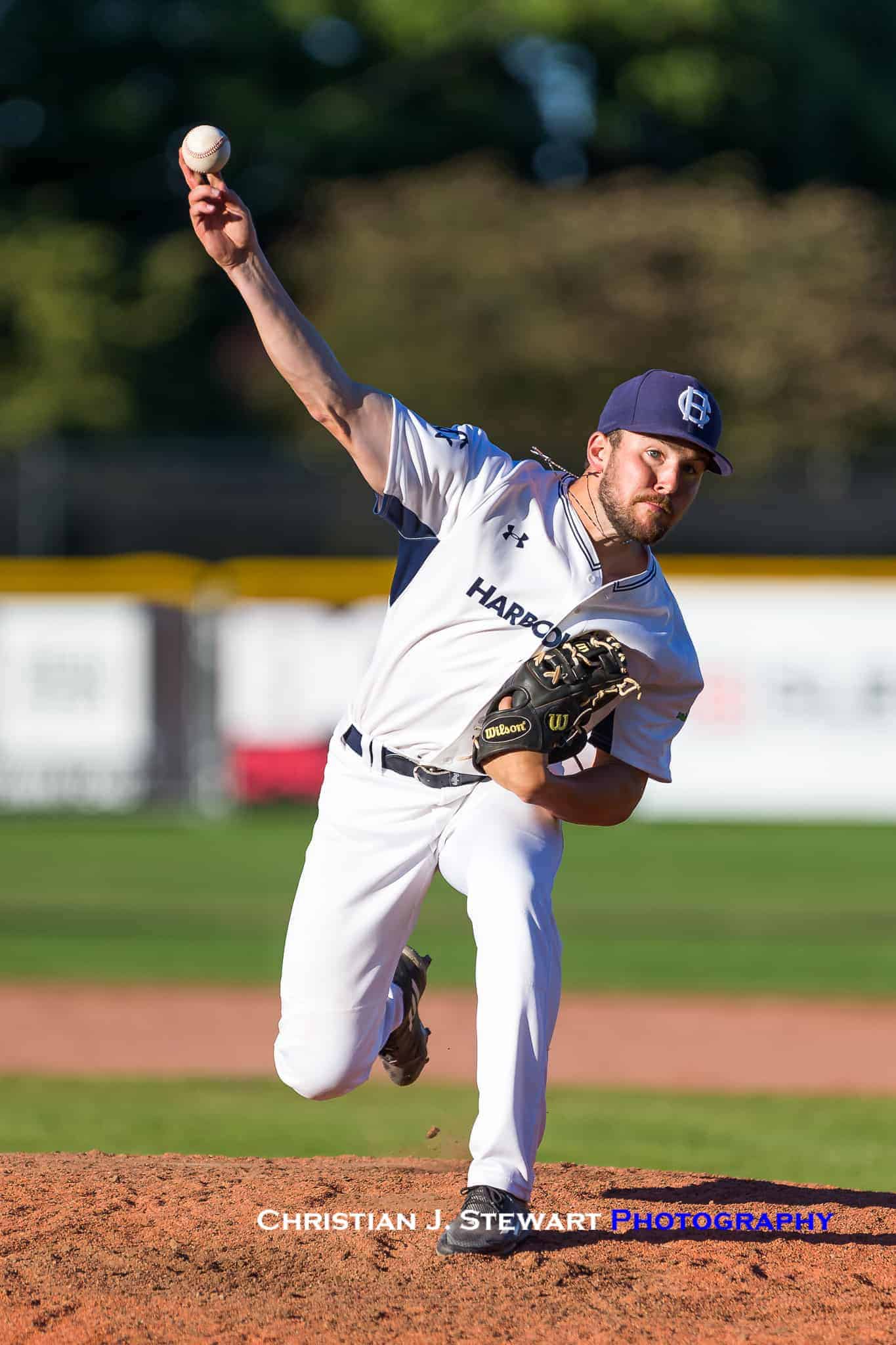 The HarbourCats used a number of pitchers on the evening including right-hander Connor Whitney (Photo: Christian J. Stewart)

The Mavericks would score two more in the 12th off Victoria’s final pitcher of the night, Ethan Lopez, to close out the scoring at 15-6. 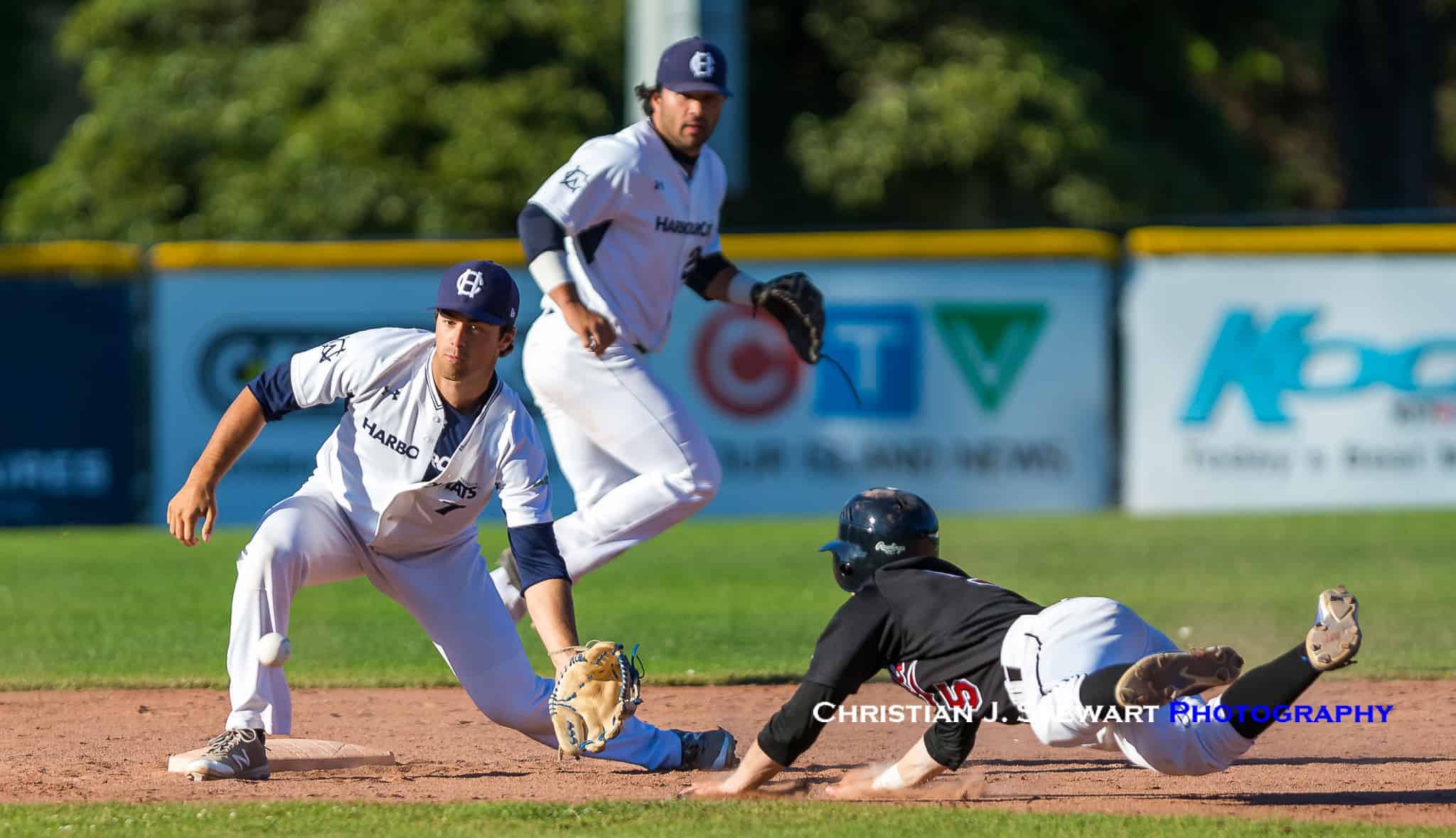 The Mavericks Brendan Turcotte would slide safely into second base on this play as HarbourCats second baseman Nick Moroney would not corral the throw (Photo: Christian J. Stewart)

On the mound Skuija went four full innings, giving up the three Maverick runs on two hits.  He was relieved by a bevy of pitchers including Matt Kent, Andrew Shaps – making his first pitching appearance of the season – Connor Whitney, Blake Hannah, Jack Tagget and in a rare mound appearance, Ethan Lopez. 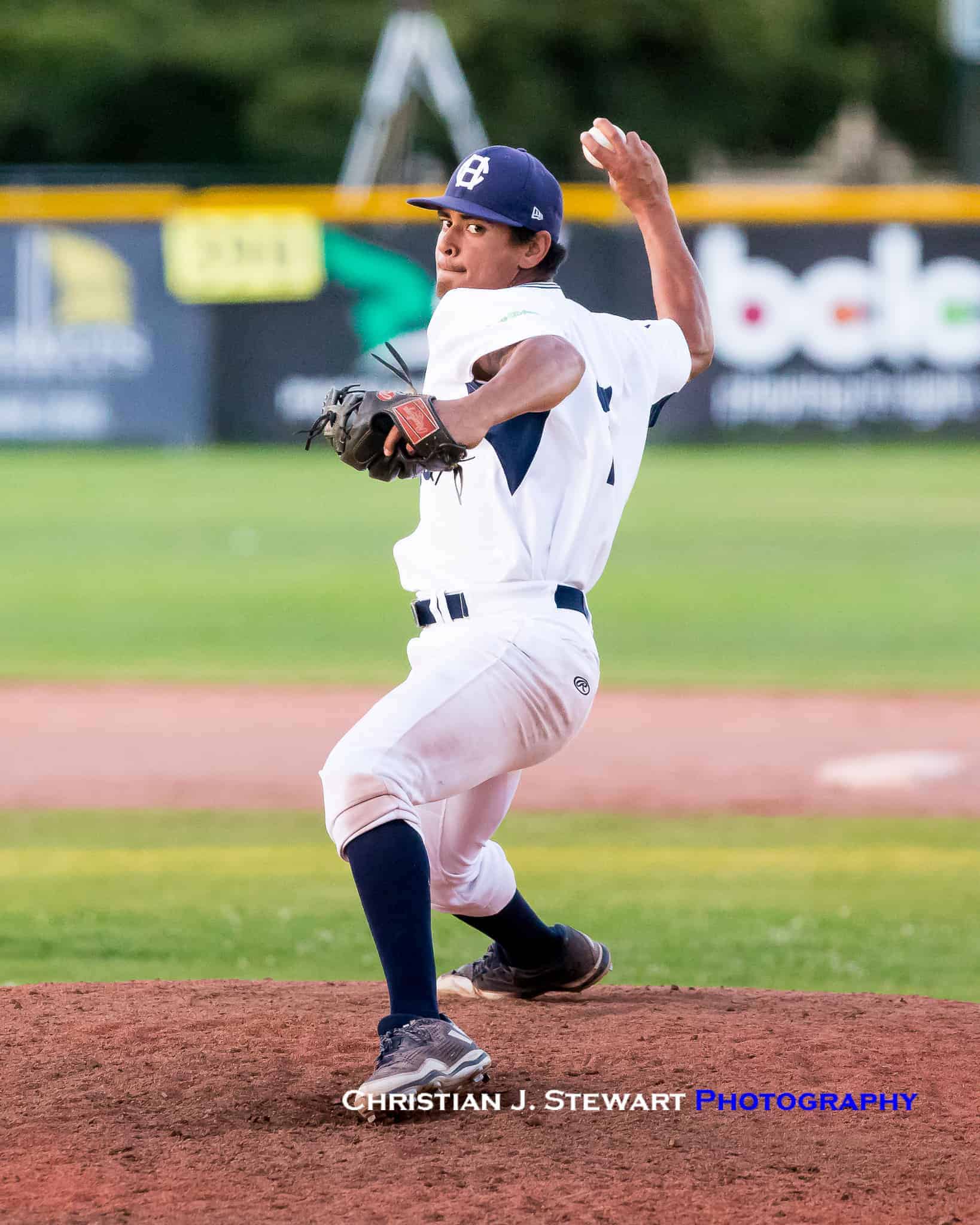 The HarbourCats now hit the road Tuesday to begin a three game series with their Canadian rivals, the Kelowna Falcons and then return Friday to RAP for a series with the Bend Elks.  The ‘Cats are riding a five-game West Coast League win streak and are currently 1-0 to begin the second half of the split season.