Following the HarbourCats 10-4 win over the Bells on Tuesday, the HarbourCats literally gave the jerseys off their backs to lucky fans in an end-of-game promotion (Photo: Christian J. Stewart)

August 1, 2017, Victoria, BC – The Victoria HarbourCats moved into sole possession of first place (for now) in the tightly contested West Coast League (WCL) North Division with a 10-4 win over the Bellingham Bells on a hot and hazy Tuesday night at Royal Athletic Park in Victoria.

The win gives the HarbourCats a measure of revenge for the Bells 19-hit, 11-9 win on Monday night, but more importantly re-establishes Victoria’s 1.5 game lead over the Bells and half game lead over Wenatchee for the North Division lead. 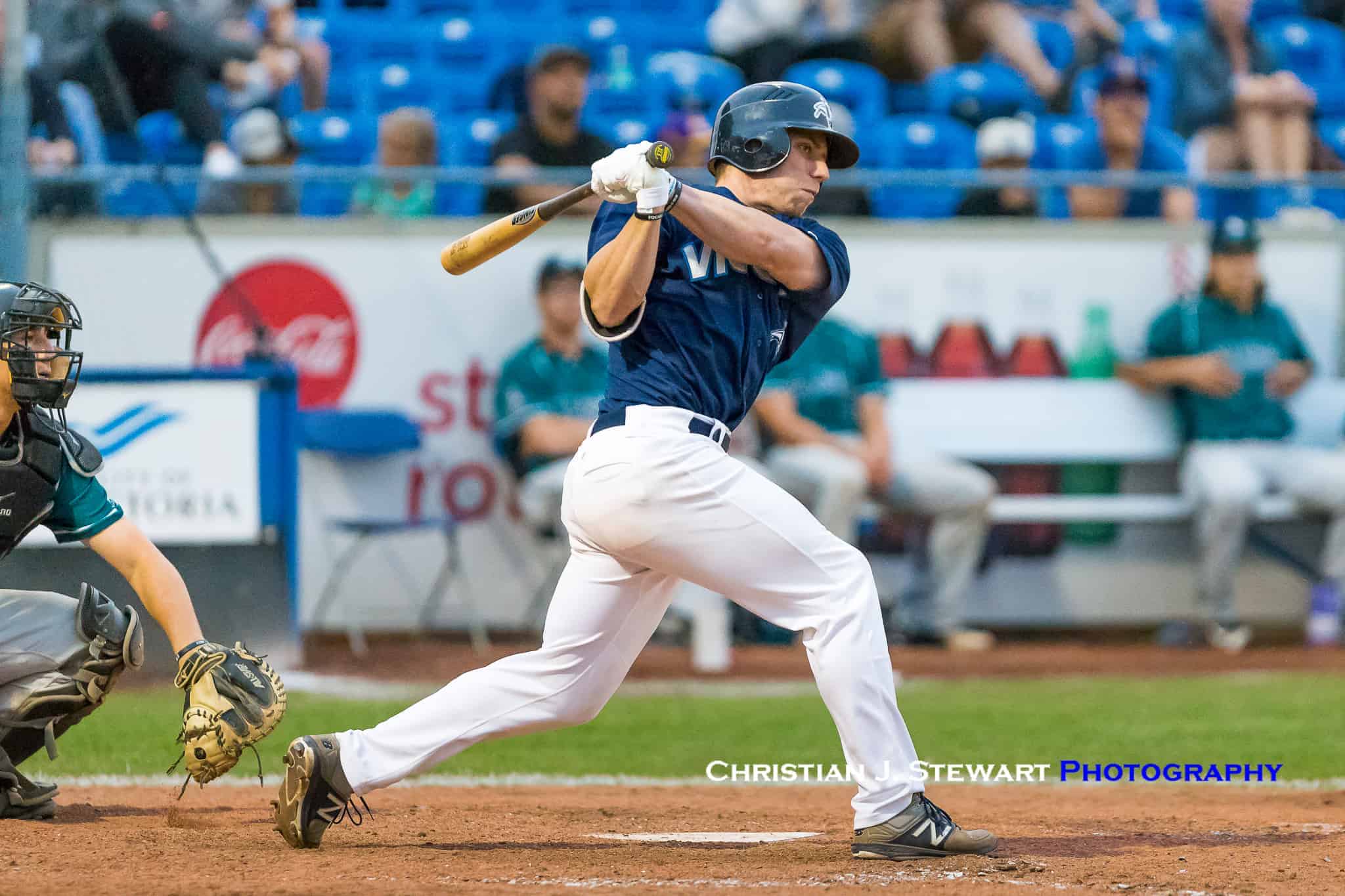 Victoria’s Kevin Collard would have a 3 for 3 evening with a home run, double, single, 3 RBIs and 3 runs scored in the 10-4 win over the Bells (Photo: Christian J. Stewart)

The AppleSox, who began the night tied with the HarbourCats for first place, did not have a chance to keep pace Tuesday, as game one of their crucial three-game set with the Corvallis Knights was cancelled due to extreme heat and smoky weather conditions in Wenatchee. Those teams will play a double-header Wednesday.

The Bells would strike first in this one with a run in the top of the third off Victoria starter Taylor Prokopis, but a pair of solo home runs from Kevin Collard and Hunter Vansau in the bottom of the inning would erase that 1-0 lead and put the HarbourCats out in front 2-1. 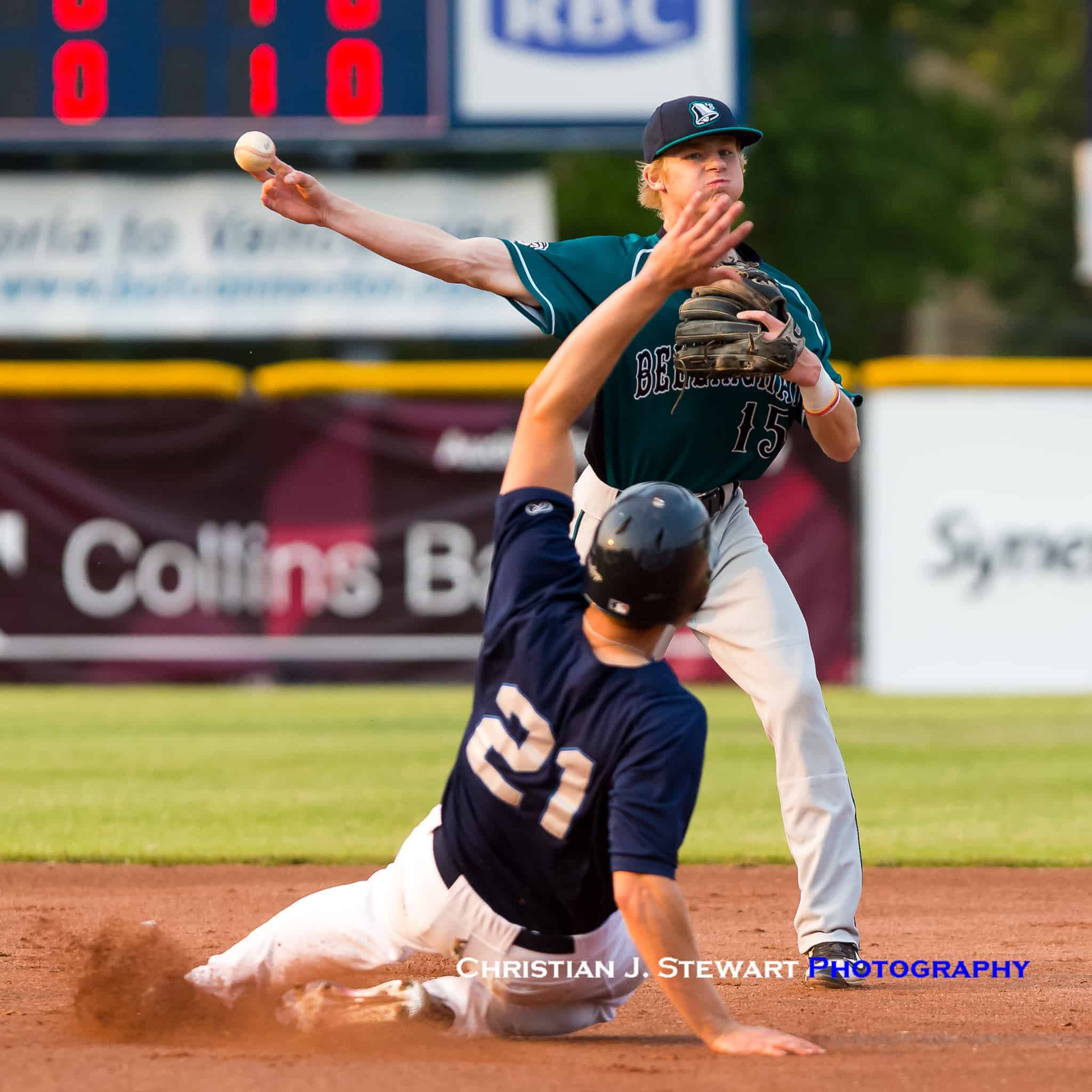 Victoria would add three more in the bottom of the third when Tucker Johnson led things off with a single and Riley Zayicek would walk, with Johnson then coming in to score on a bad throw to third on a double steal attempt. A Collard double to the wall scored Zayicek and Shipley followed with an RBI double of his own to score Collard and put the HarbourCats up 5-1. 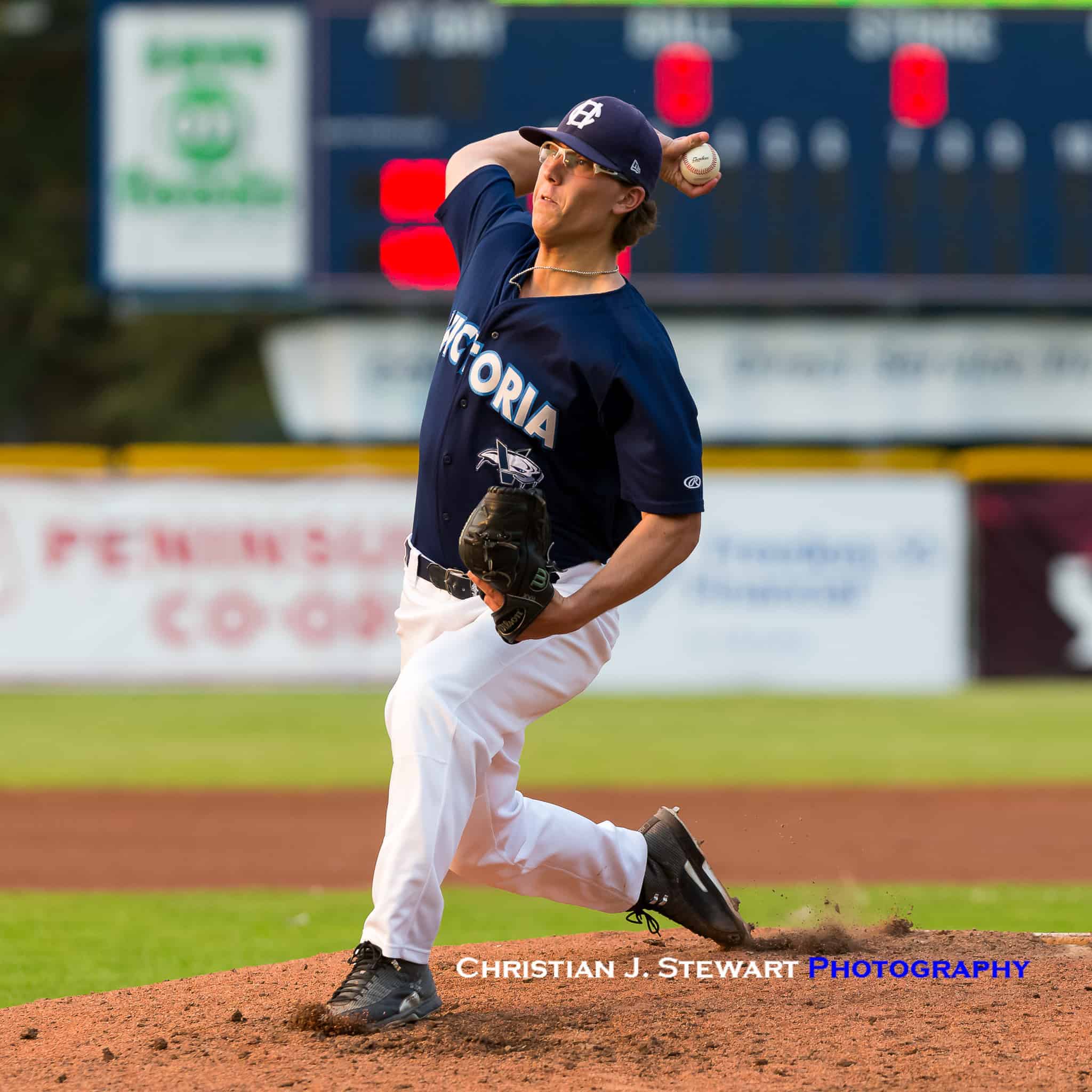 Victoria starter Taylor Prokopis had perhaps his best outing as a starter Tuesday going 5.2 innings to get credit for the 10-4 win (Photo: Christian J. Stewart)

The teams would exchange two runs each in the sixth, but Victoria would score three more in the bottom of the seventh, thanks to three consecutive RBI singles from Zayicek, Harrison Bragg and Collard to open up a 10-3 lead.

A Chase Illig home run, his 15th of the season in the eighth off HarbourCats reliever Garrison Ritter, who came into the game in the sixth inning, would move the Bells to within six, but Ritter in the seventh and eighth and then a combination of Travis Kuhn and Cole Masik in the ninth, would keep the Bells off the board the rest of the way and preserve the crucial 10-4 win for Victoria. 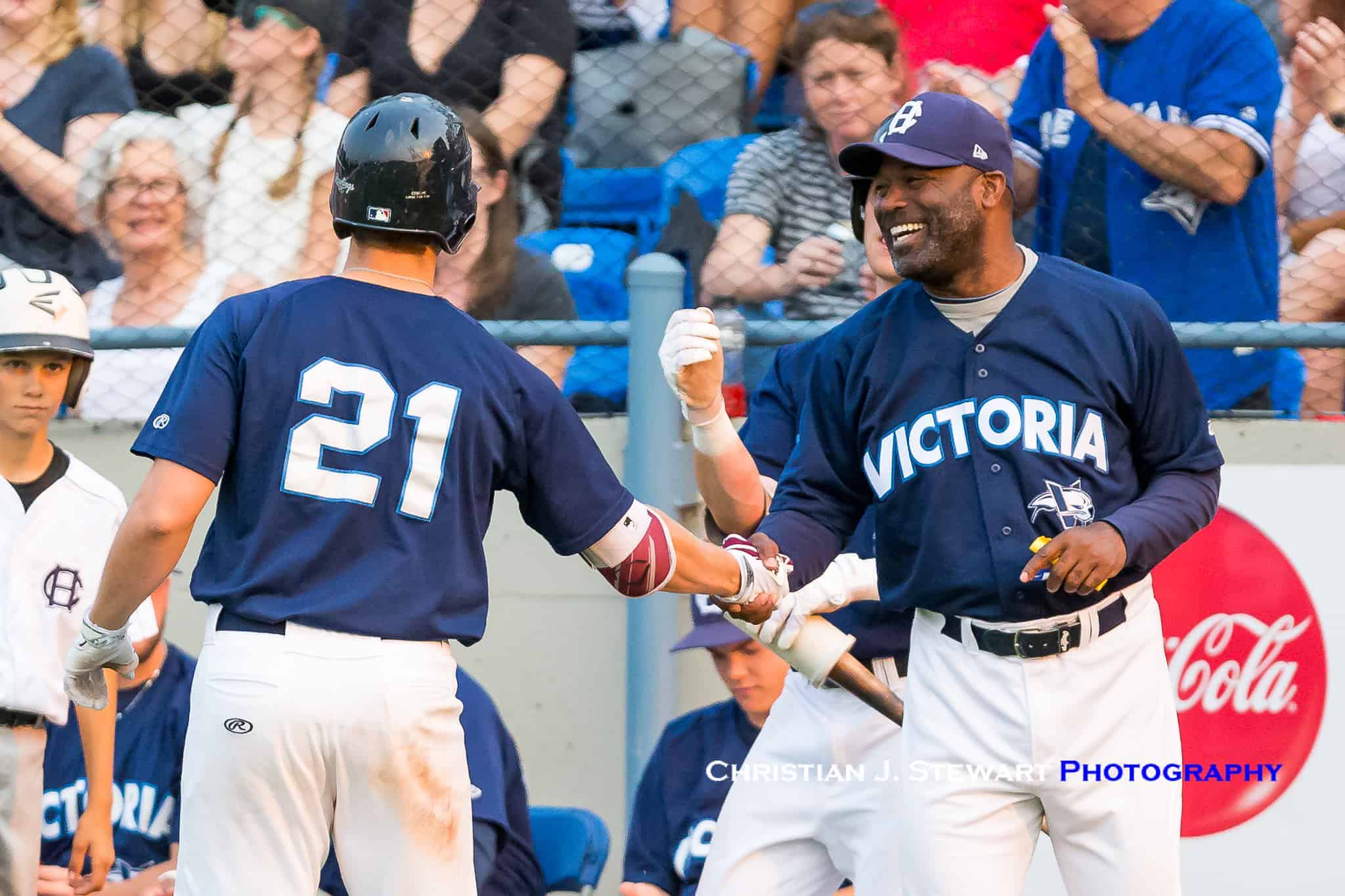 The 15-hit HarbourCats offence was paced by Kevin Collard who had a walk, single, double, home run, three RBIs and three runs scored. Hunter Vansau kept pace with Collard with four hits of his own, with an RBI and run scored via his home run. Riley Zayicek walked twice had a hit, RBI and a run scored and Tucker Johnson had two hits and a run scored to also add to the mix.

On the mound, for Victoria, Prokopis would get the win to move to 4-2 on the season, going 5.2 innings and giving up three runs on seven hits, while walking two and striking out five. Garrison Ritter had a second straight solid outing going 2.1 innings in relief with his only damage being the Illig home run. Kuhn retired the only two batters he faced in the ninth and Masik retired one for the final out of the game. 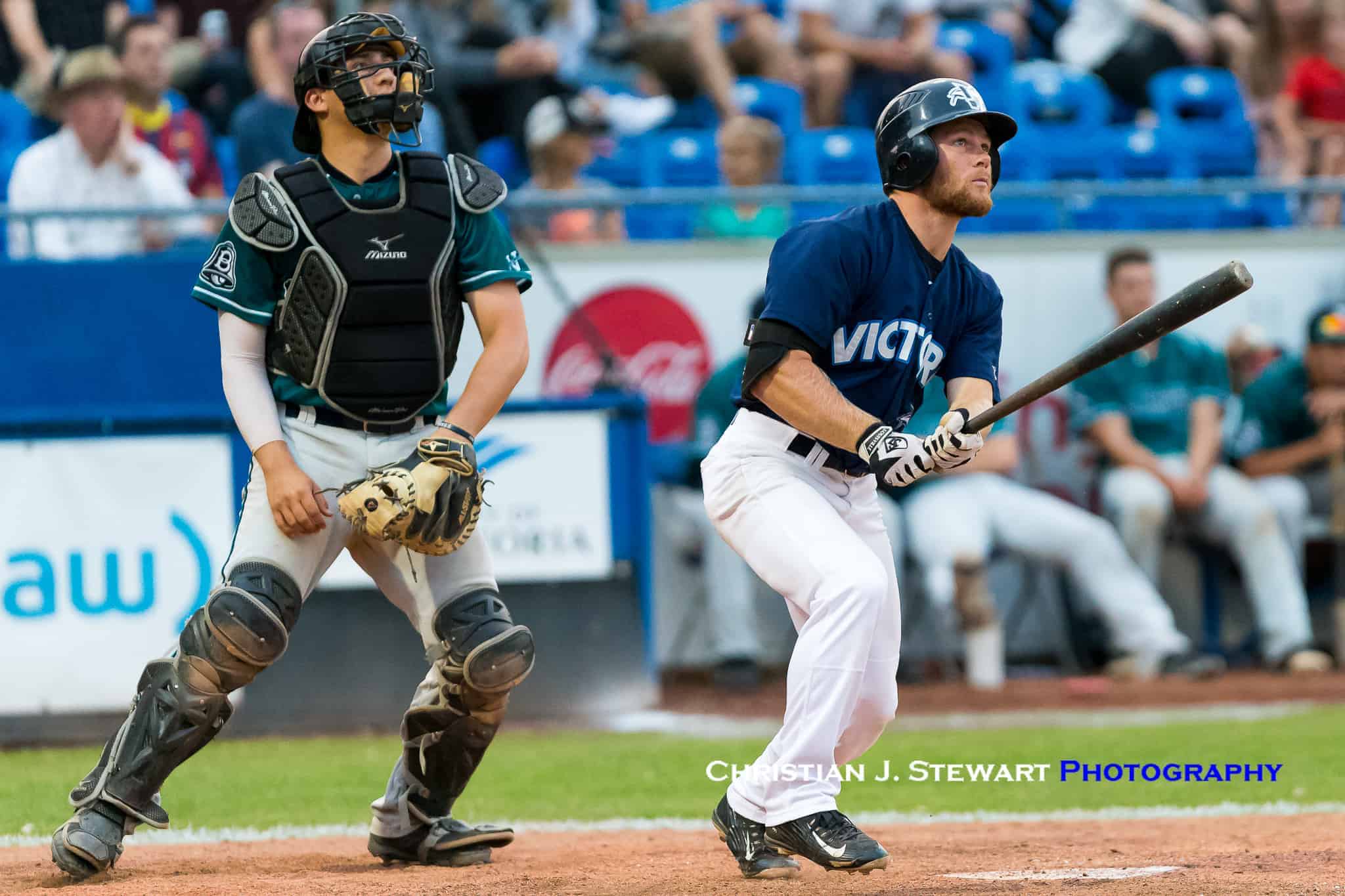 Leadoff hitter Harry Shipley would finish with a hit and two RBIs in the game against Bellingham Tuesday (Photo: Christian J. Stewart) 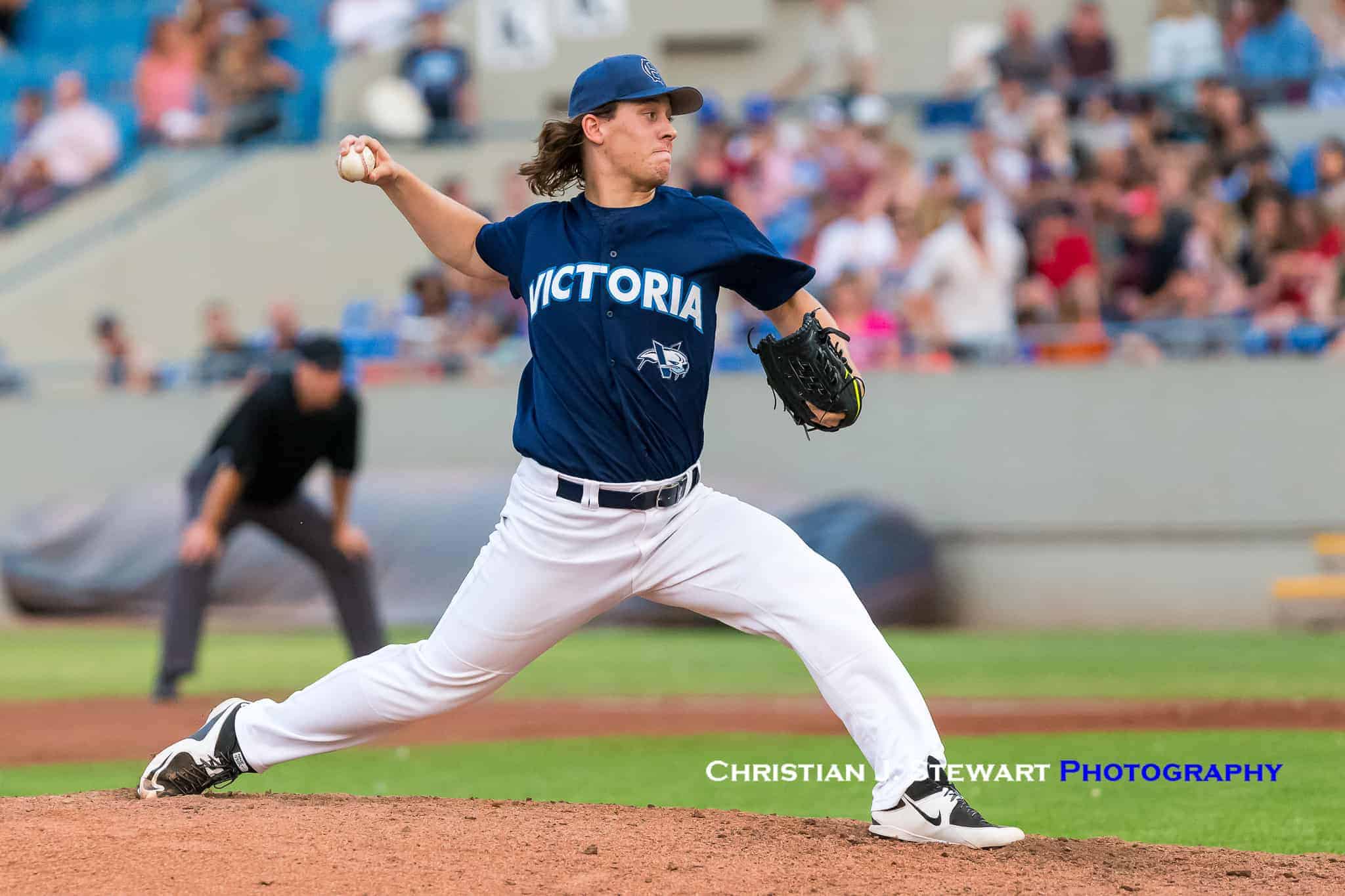 Reliever Garrison Ritter would have a second solid outing, his first at home, with 2.1 innings of one hit one run relief Tuesday (Photo: Christian J. Stewart)

The Bells and HarbourCats complete their three game series Wednesday night on “Fan Appreciation Night,” the final regular game of the season for Victoria. Wyatt Boone will get the ball for the HarbourCats while Merle Rowan-Kennedy is scheduled to start for the Bells. Game time at Royal Athletic Park is 6:35 PM. 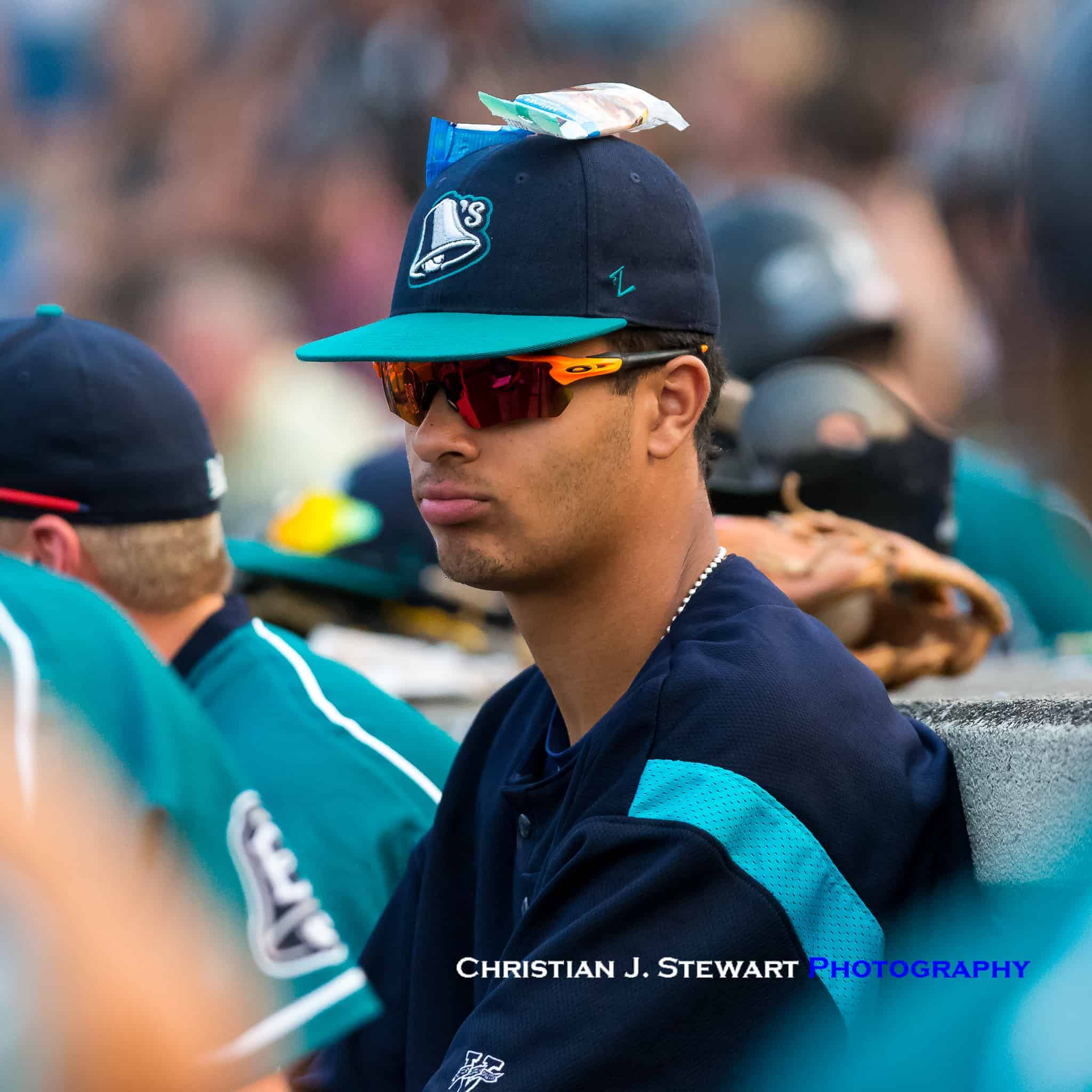 Bellingham’s Tristan Garnett would fall victim to the old buble gum on the hat trick Tuesday, although his teammates added a few candy wrappers to the mix for good measure (Photo: Christian J. Stewart)

Game Notes: Tonight was “Jersey off Their Back” night and lucky fans went home with Victoria’s dark blue road jerseys. The odd pitching change in the ninth inning was so that newcomer Cole Masik can get an additional appearance in, as he needs five appearances to be eligible for the playoffs. For similar reasons, reliever Dylan Thorp was inserted as a pinch runner in the eighth.