With the West Coast League’s North Division second half pennant hanging in the balance, the Victoria HarbourCats (29-25, 15-12 second half) played a marathon extra innings slugfest in Port Angeles against the Lefties (18-35, 8-18) in their regular season finale on Sunday. Neither team could sustain success on the mound, leading to several big innings, and ultimately a 17-16 Port Angeles win. 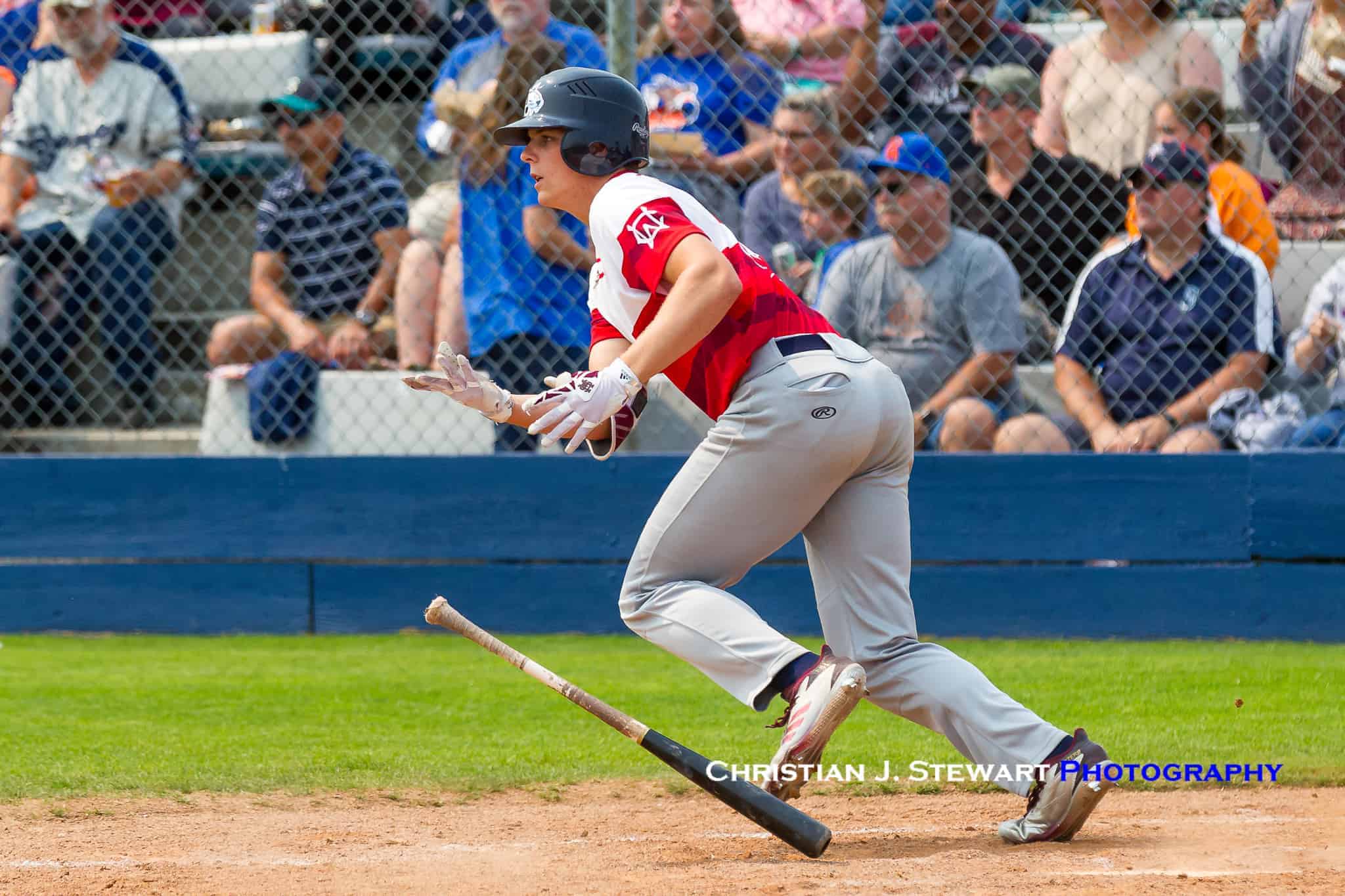 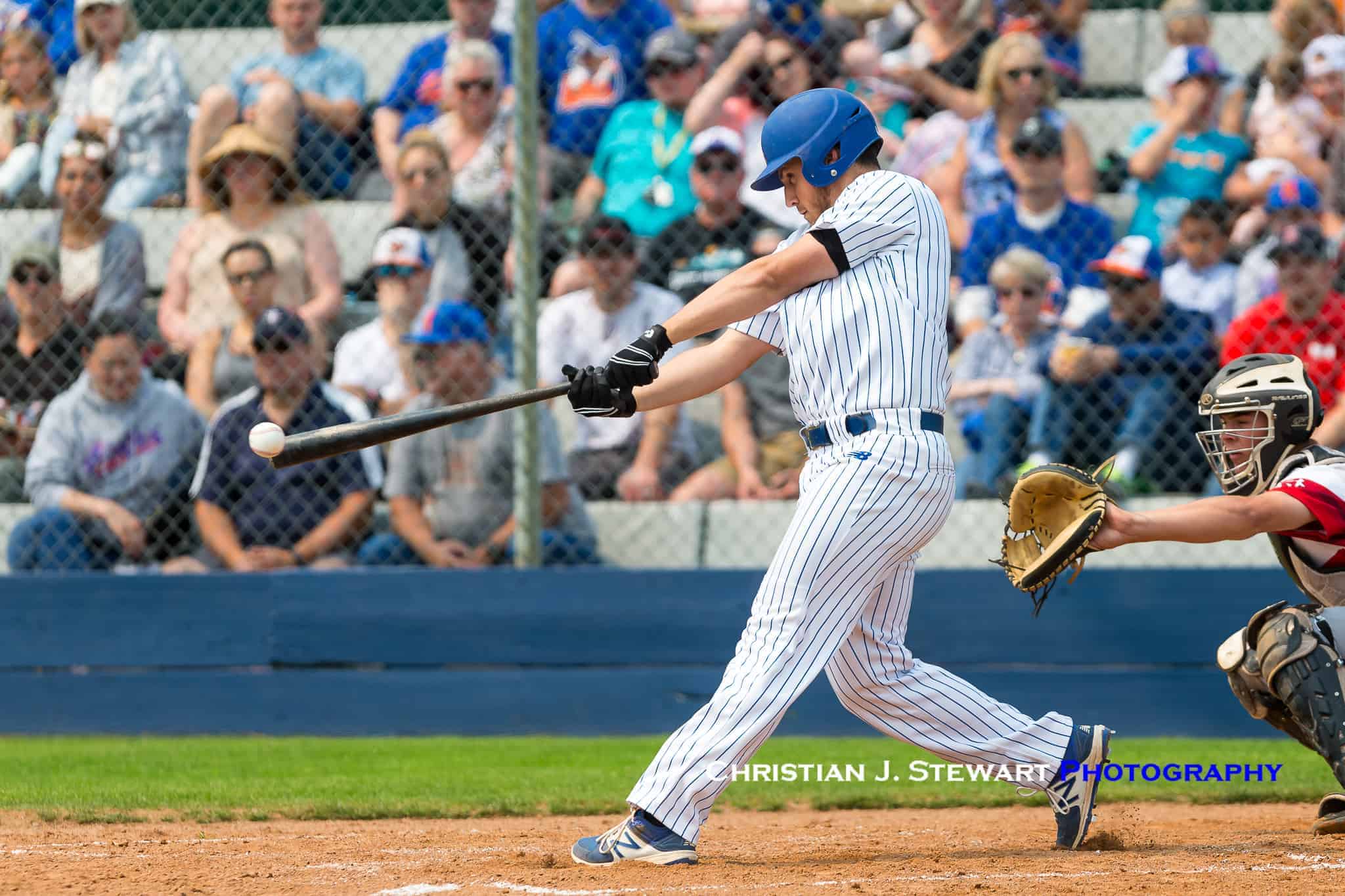 The Leftie’s Michael Ciancio would get just enough bat on the ball to earn a first-inning single in the game against Victoria on Sunday (Photo: Christian J. Stewart)

Port Angeles staked themselves to a 5-0 lead after two innings, and scored seven runs between the fourth and fifth innings. The HarbourCats were scoreless through three innings, but erupted for 13 runs on 11 hits in the middle innings to take a 13-12 lead. 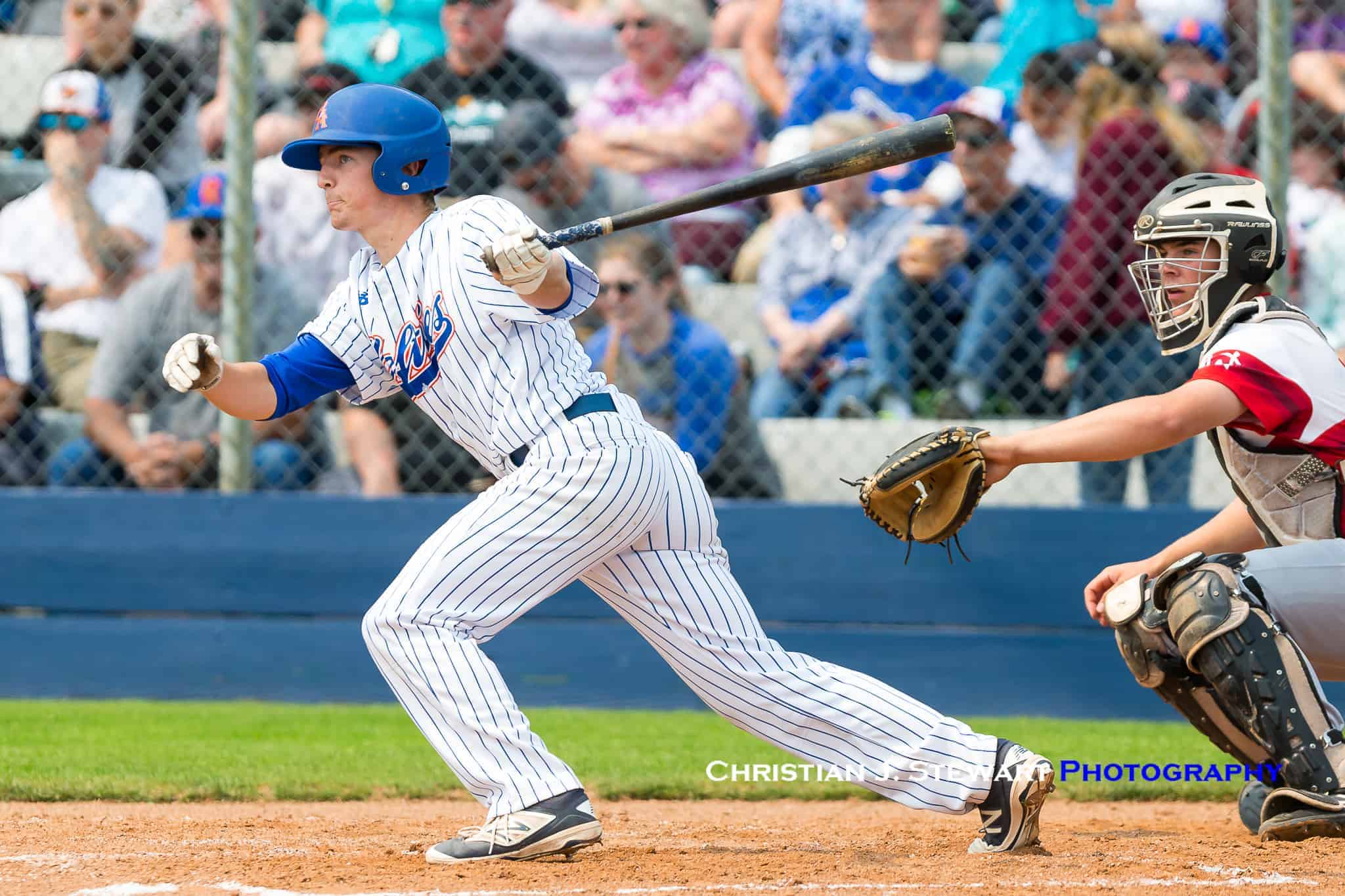 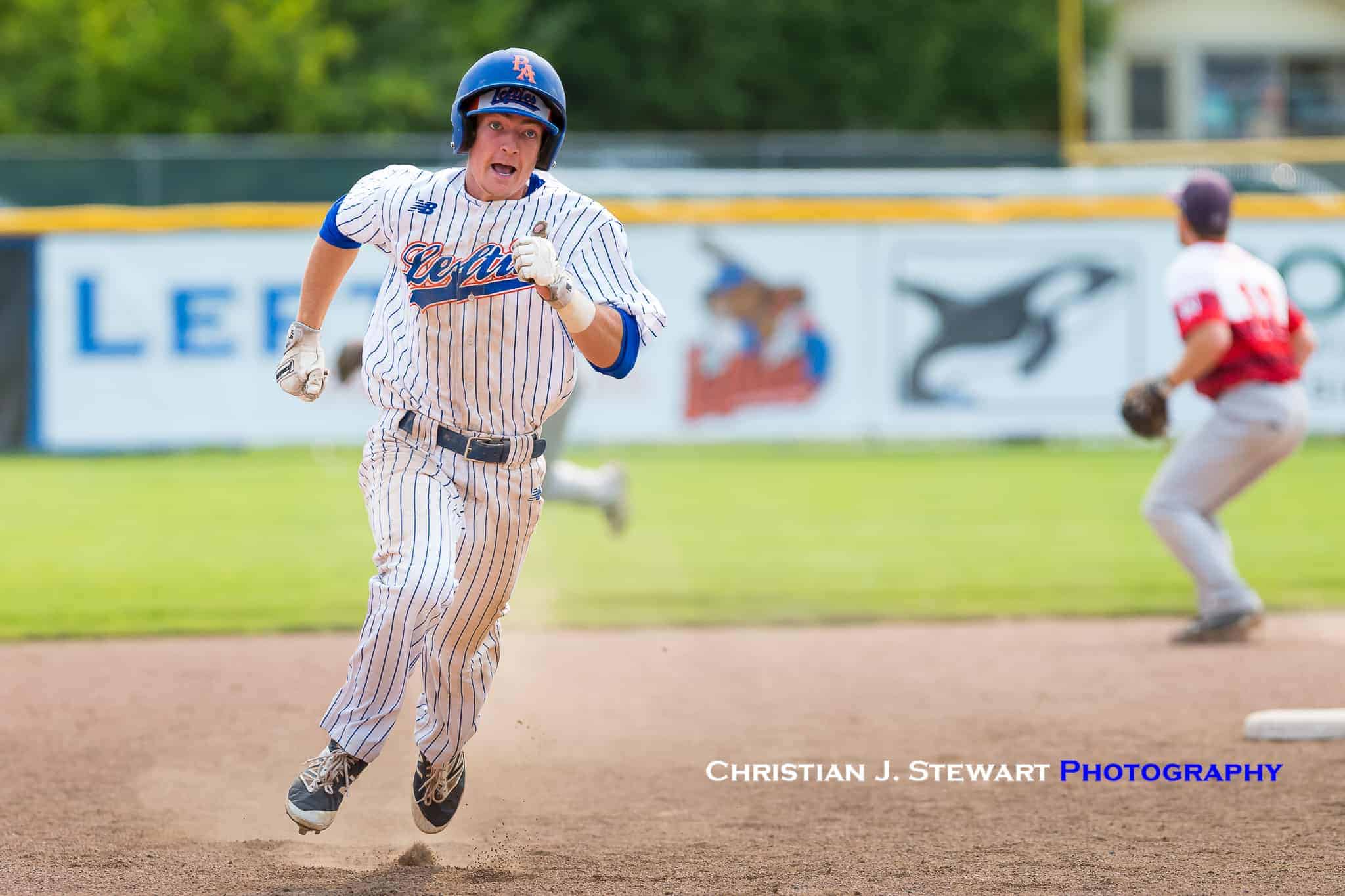 The Lefties Brian Hill heads to third with a RBI triple on Sunday against the HarbourCats (Photo: Christian J. Stewart)

The most eventful inning of the day was the fifth, when Victoria scored six, only to have the Lefties come back with five.

The two teams traded runs in the seventh before the second home run of the game for first baseman Harrison Bragg (Mississippi State) gave the HarbourCats two-run lead going to the bottom of the ninth. 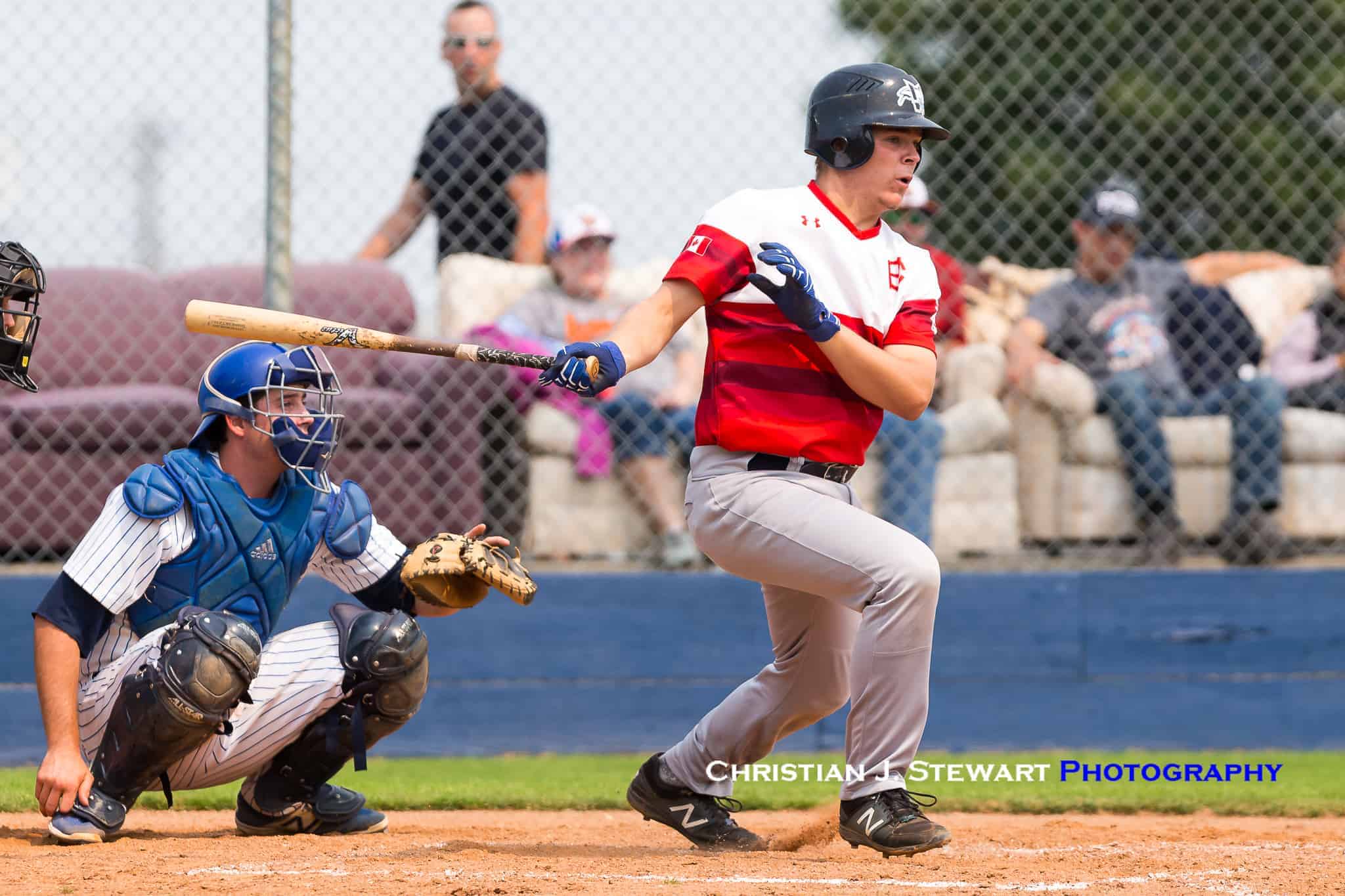 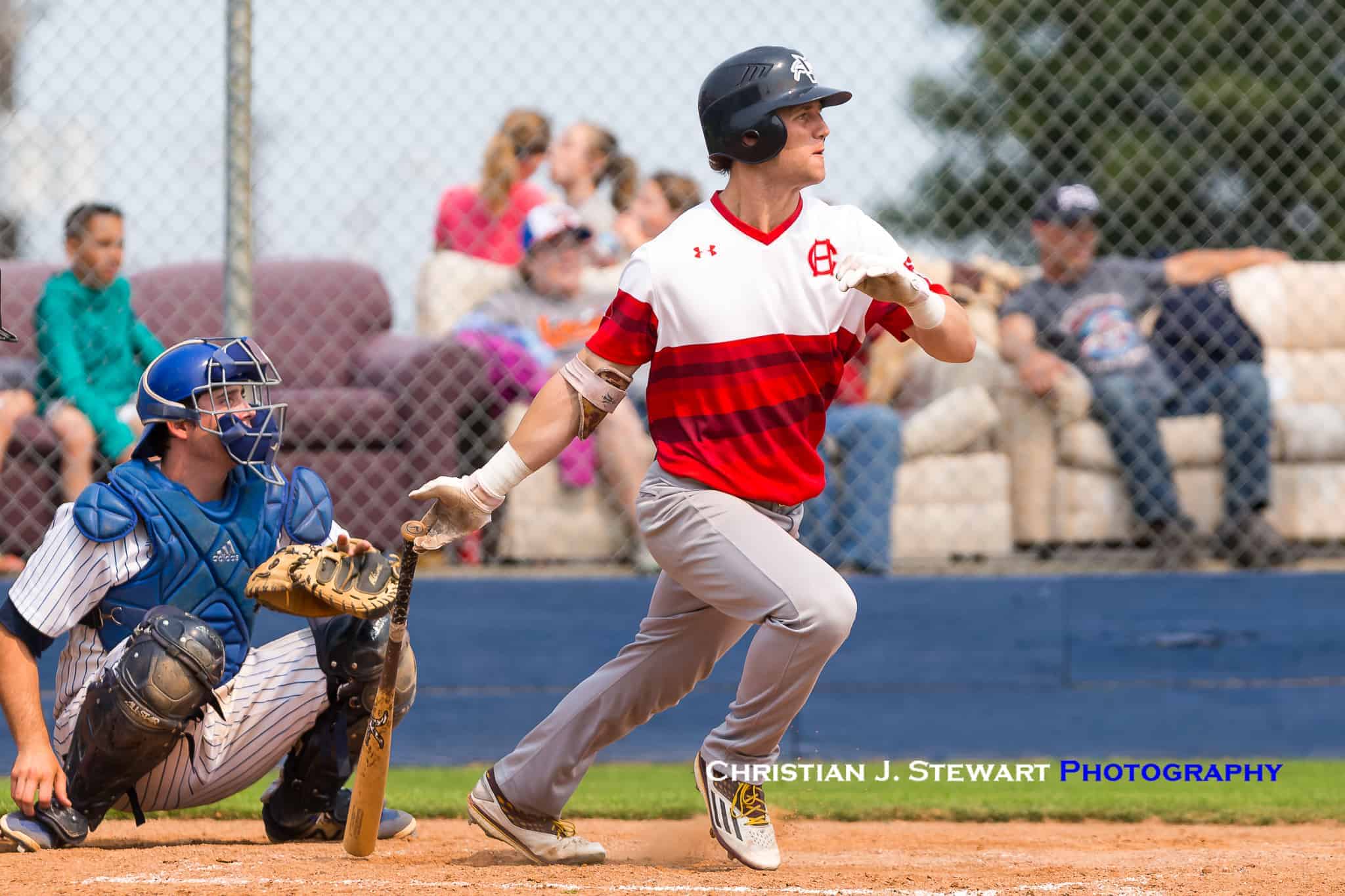 Andrew Shaps would have a double, RBI, walk and run scored against Port Angeles on Sunday (Photo: Christian J. Stewart)

With Port Angeles down to their final out, Jordan Ackerman delivered a two-run double, sending the game to extra innings, tied at 15.

The HarbourCats scored one in the top of the eleventh, but Port Angeles came back with two in the bottom half for the walk-off victory. 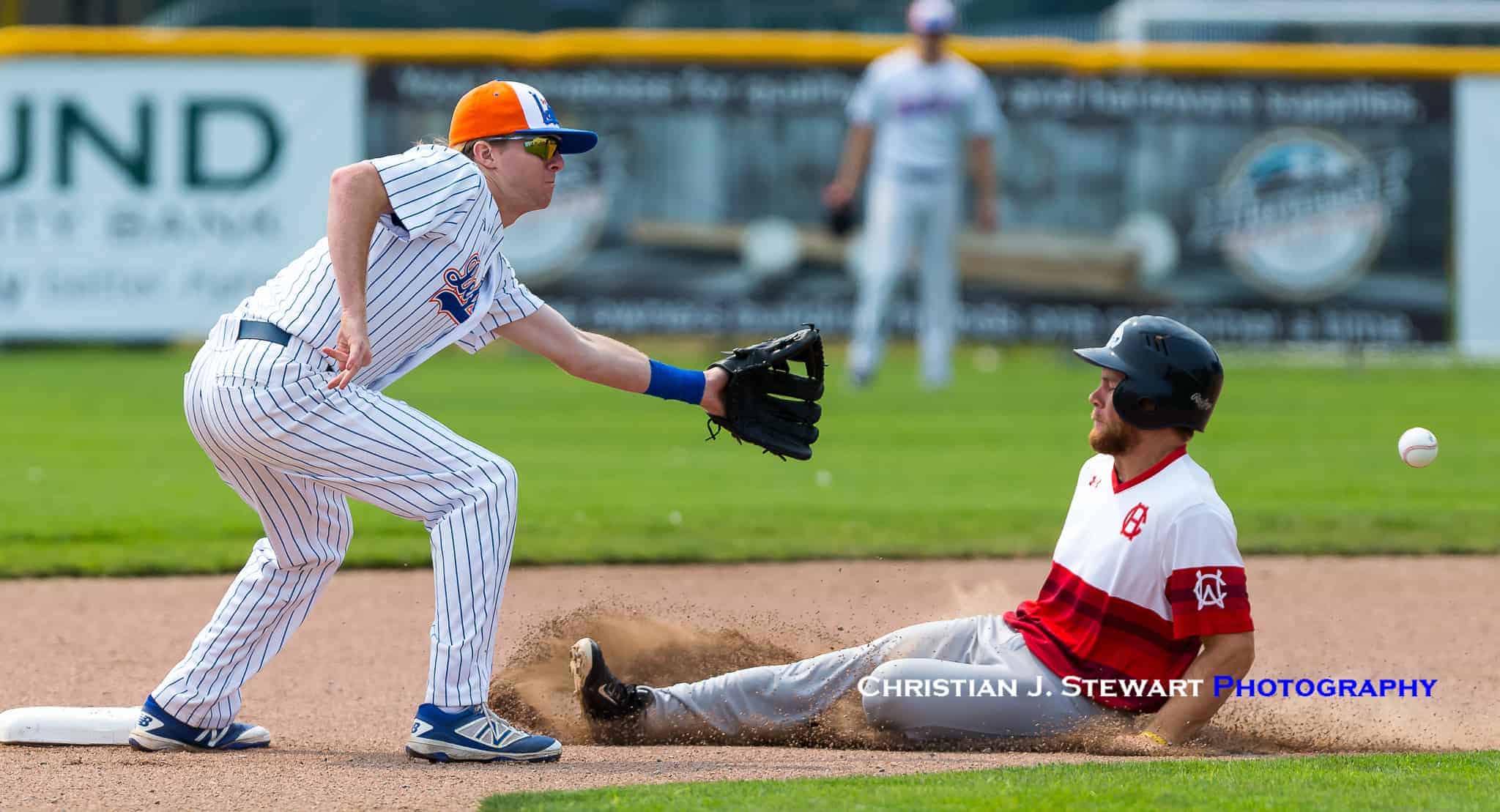 The HarbourCats loss combined with a Bellingham win over Wenatchee on Sunday means that a makeup game between Wenatchee and Corvallis will be played to determine the second half north division pennant winner. Victoria and Bellingham are still alive, while Wenatchee has been eliminated. 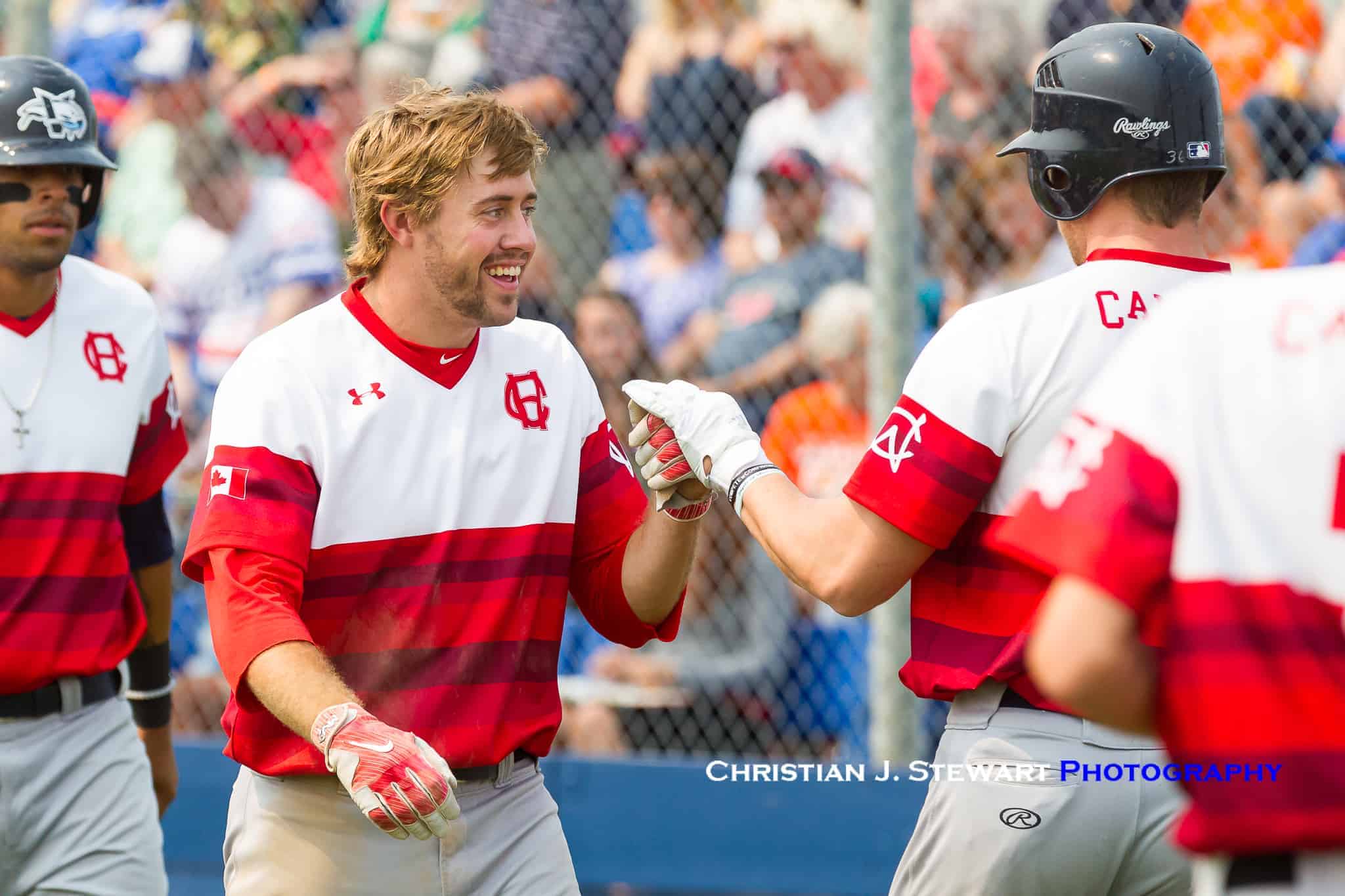 Tucker Johnson was all smiles Sunday after scoring one of his three and the HarbourCats 16 runs. Johnson would finish with a three-hit day in the losing effort (Photo: Christian J. Stewart) 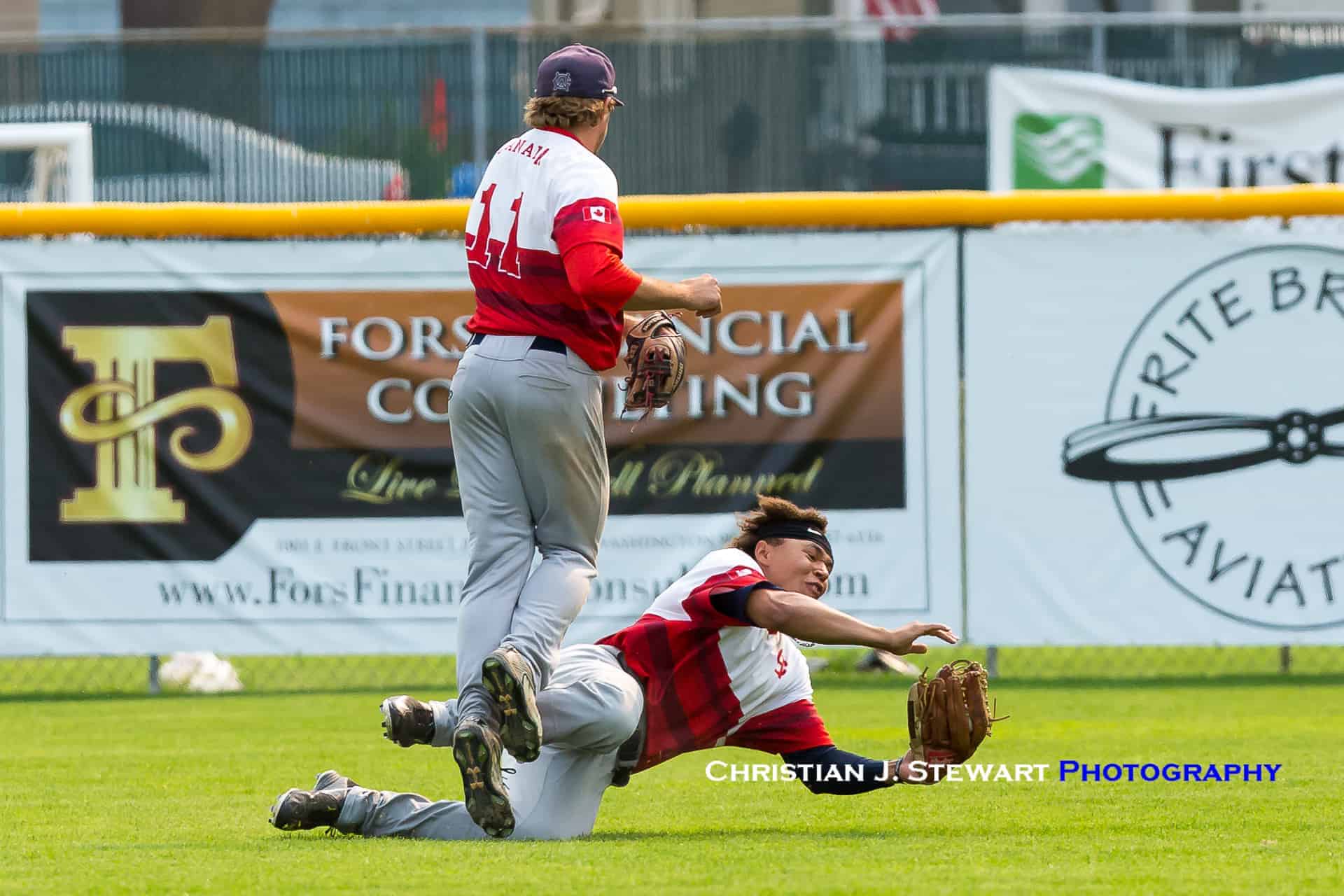 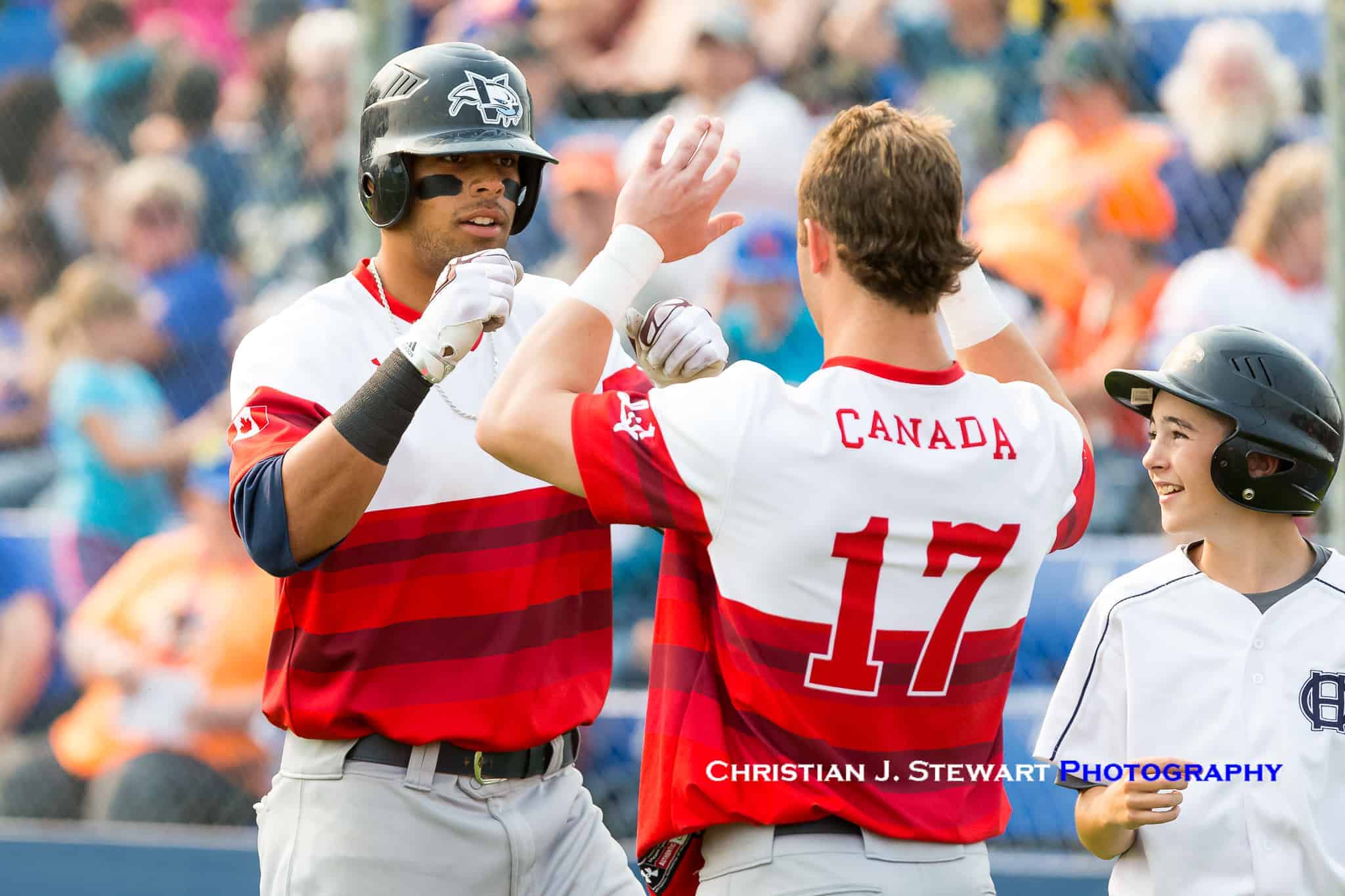 Victoria owns the tiebreaker with Bellingham (15-12) by virtue of a better win percentage against divisional opponents in the second half.

For more on the standings situation and procedures, please visit the WCL website: http://westcoastleague.com/news/?article_id=427 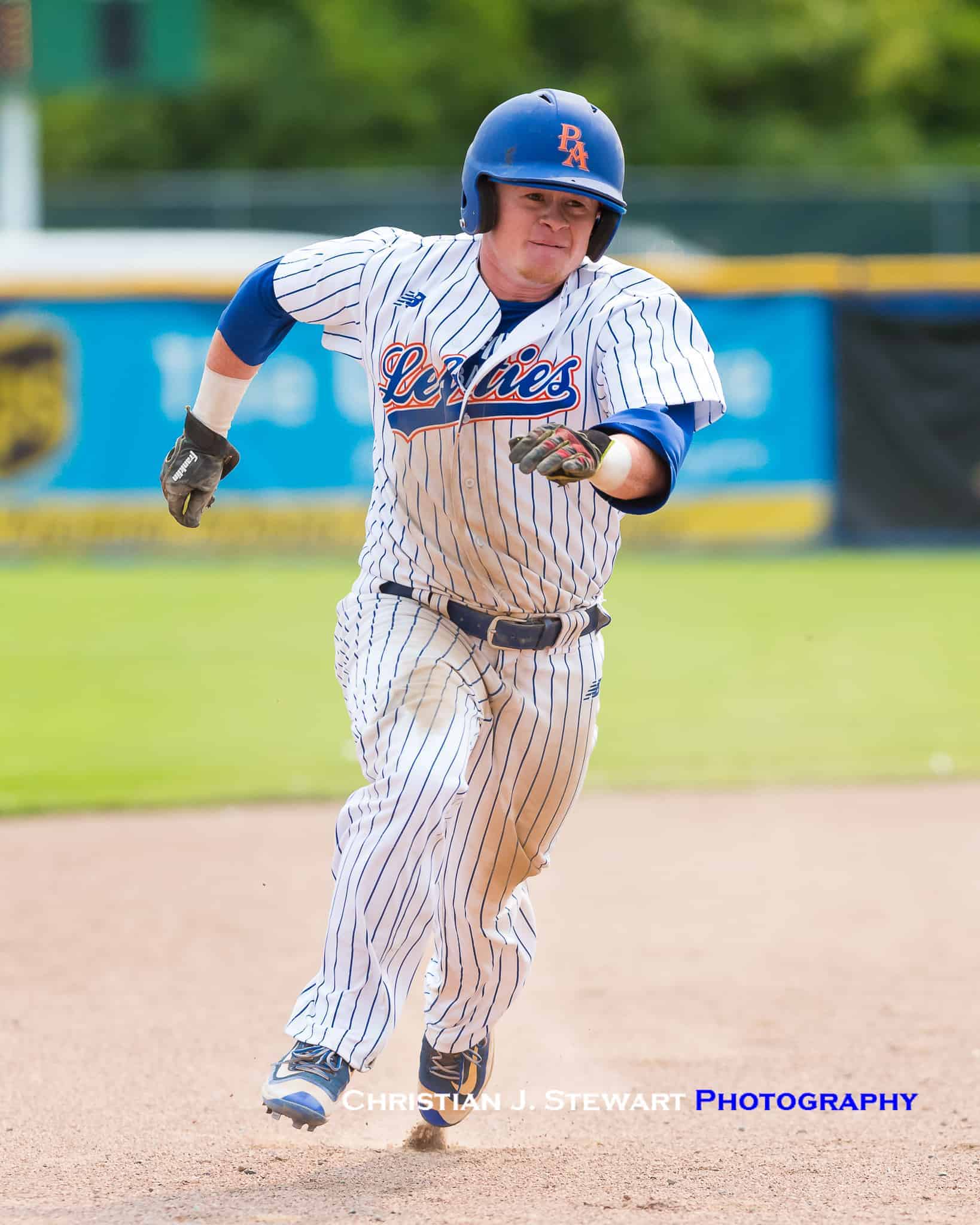 Former HarbourCat and now Leftie Jordan Ackerman was a thorn in the ‘Cats paw Sunday, getting five hits, including a two-RBI double in the bottom of the ninth to tie the game and force it to extra innings. He also walked once and scored three times in the Lefties 17-16 win (Photo: Christian J. Stewart)

Tickets sales plans are in place in preparation for a possible playoff game in Victoria.

If the HarbourCats qualify for the playoffs, they would host game one at Royal Athletic Park on Tuesday, August 8 at 6:35pm.

Tickets would be made available online through Ticket Rocket, should the HarbourCats clinch their playoff berth.

Further updates will be provided. 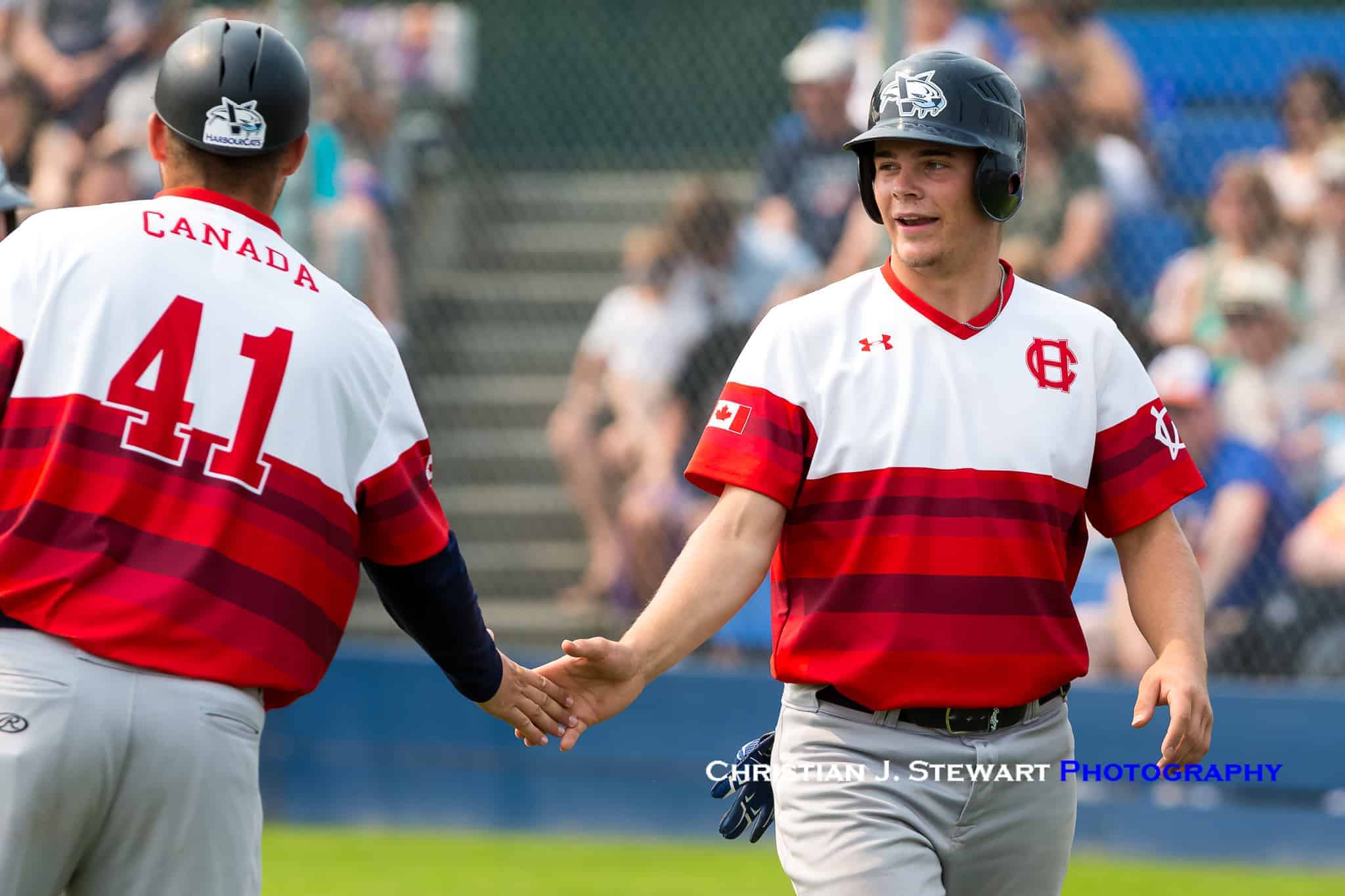 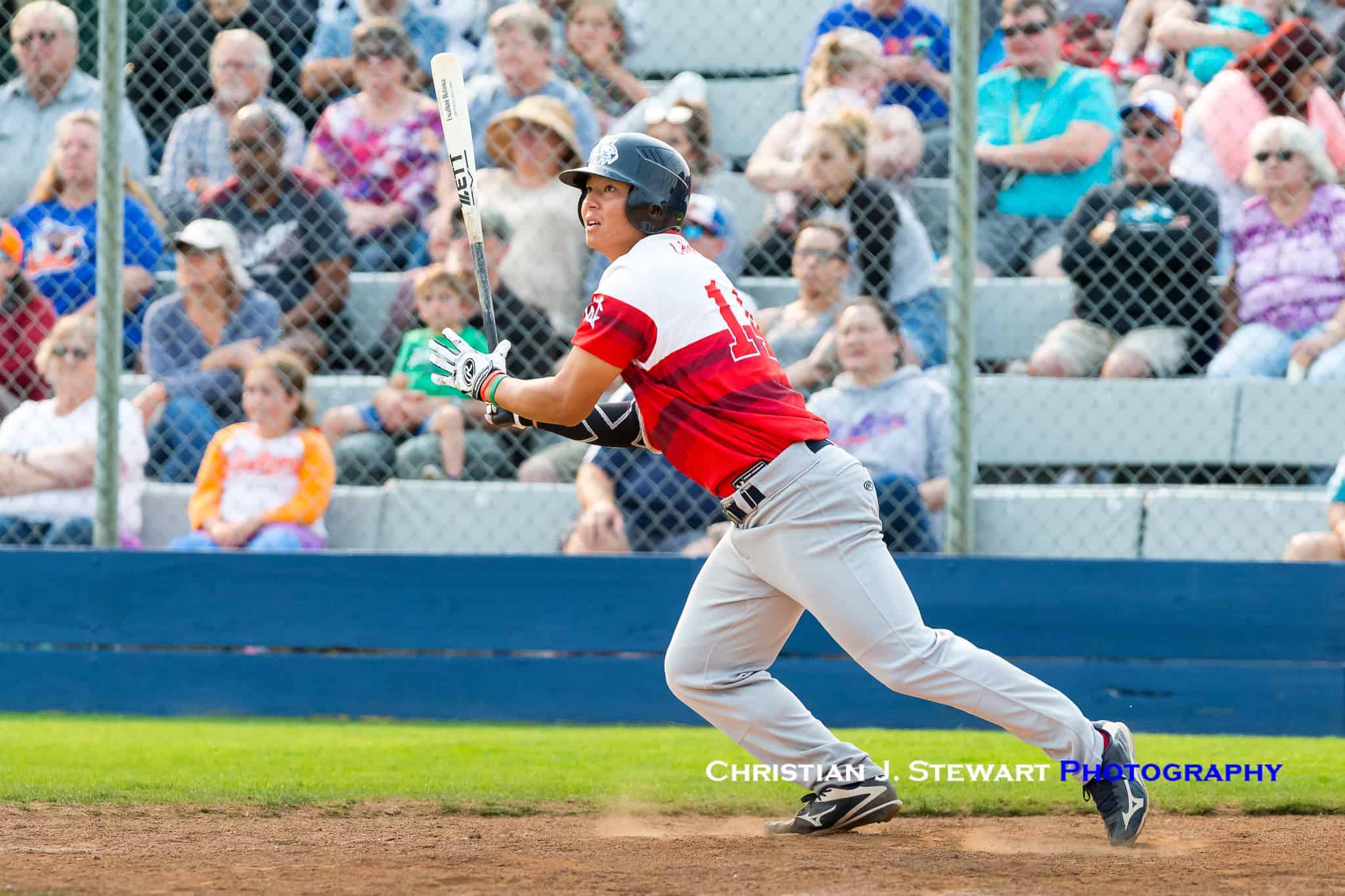 Po-Hao Huang would double and score in the top of the 11th inning to put the HarbourCats briefly in front (Photo: Christian J. Stewart) 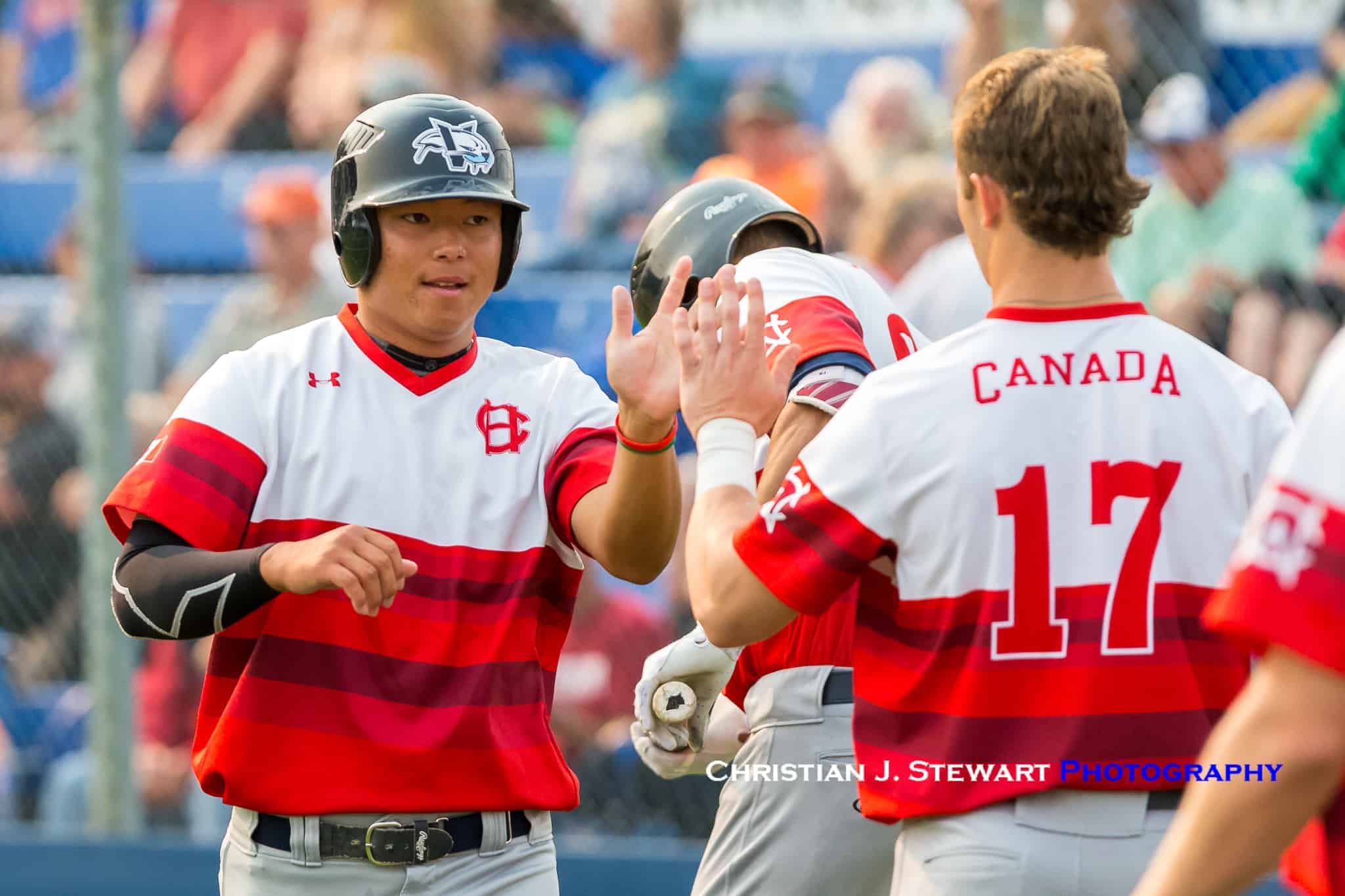 Po-Hao Huang is congratulated by Andrew Shaps (17) after scoring the go-ahead run in the top of the 11th inning Sunday (Photo: Christian J. Stewart)

2018 season tickets will go on sale in July including the highly popular Campbell Real Estate Club. Tentative plans are in the works to expand the new home plate seating section from two to four rows of padded seating.

Waiting lists will be taken for season tickets in the Diamond Club seats.

The Port Angeles Lefties celebrate their dramatic walk-off win over the Victoria HarbourCats in the last regular season game of the season for both teams (Photo: Christian J. Stewart) 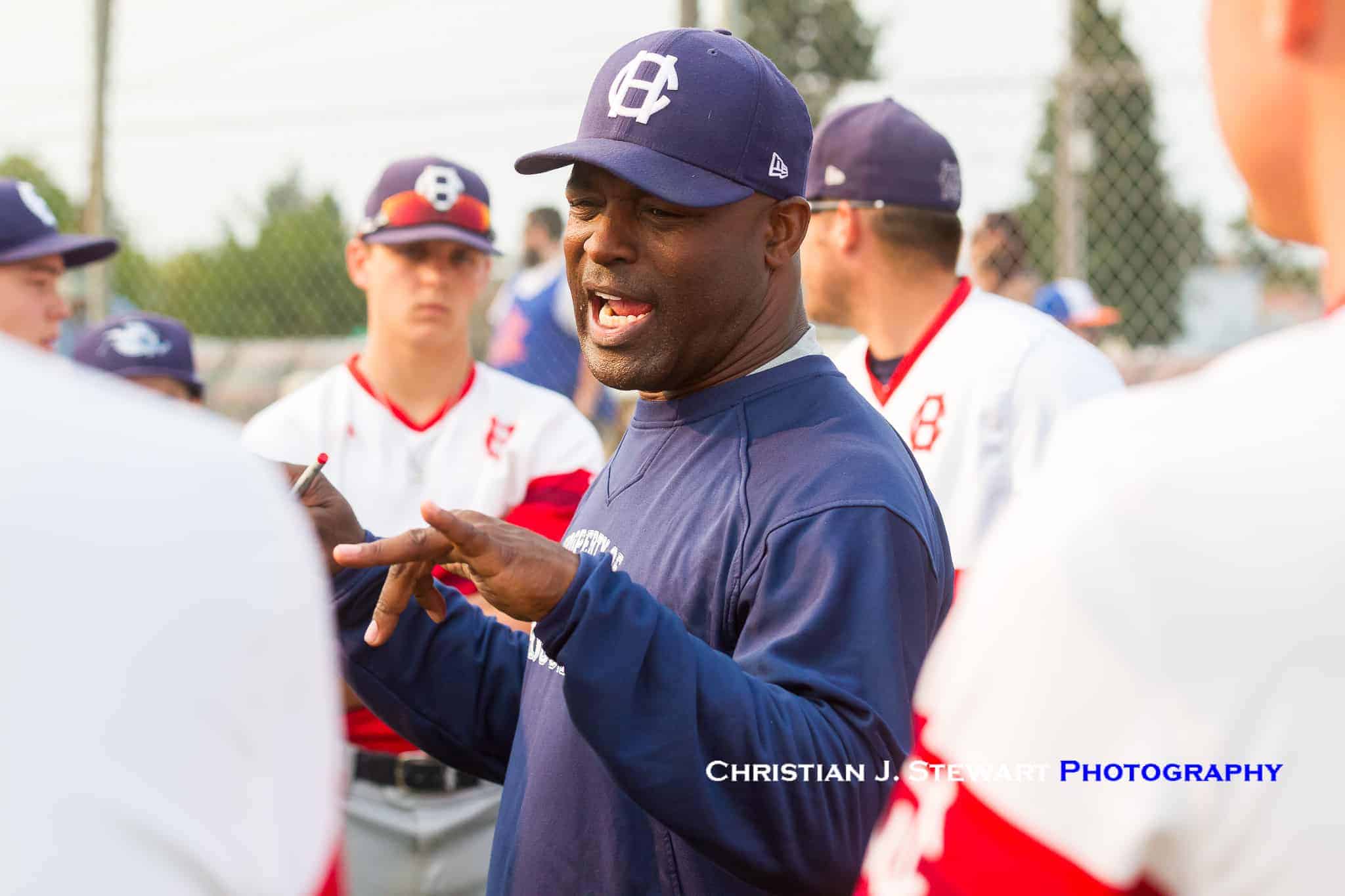 Victoria Manager Brian McRae addresses his troops after the heart-breaking loss to the Lefties on Sunday (Photo: Christian J. Stewart)