With hair-a-flying, Victoria’s Noah Prewett prepares to be swarmed after driving in the winning run in the HarbourCats 12-11 walk-off, comeback win over Cowlitz on Thursday evening (Photo: Christian J. Stewart)

June 29, 2017, Victoria, BC – In one of the wackiest baseball games to be played perhaps ever at Royal Athletic Park, the Victoria HarbourCats scored 10 runs in their last four at bats, including six runs in the bottom of the ninth inning, to overcome 7-1 and 11-6 deficits and walk-off with a 12-11 victory over the Cowlitz Black Bears in West Coast League (WCL) action Thursday in Victoria. 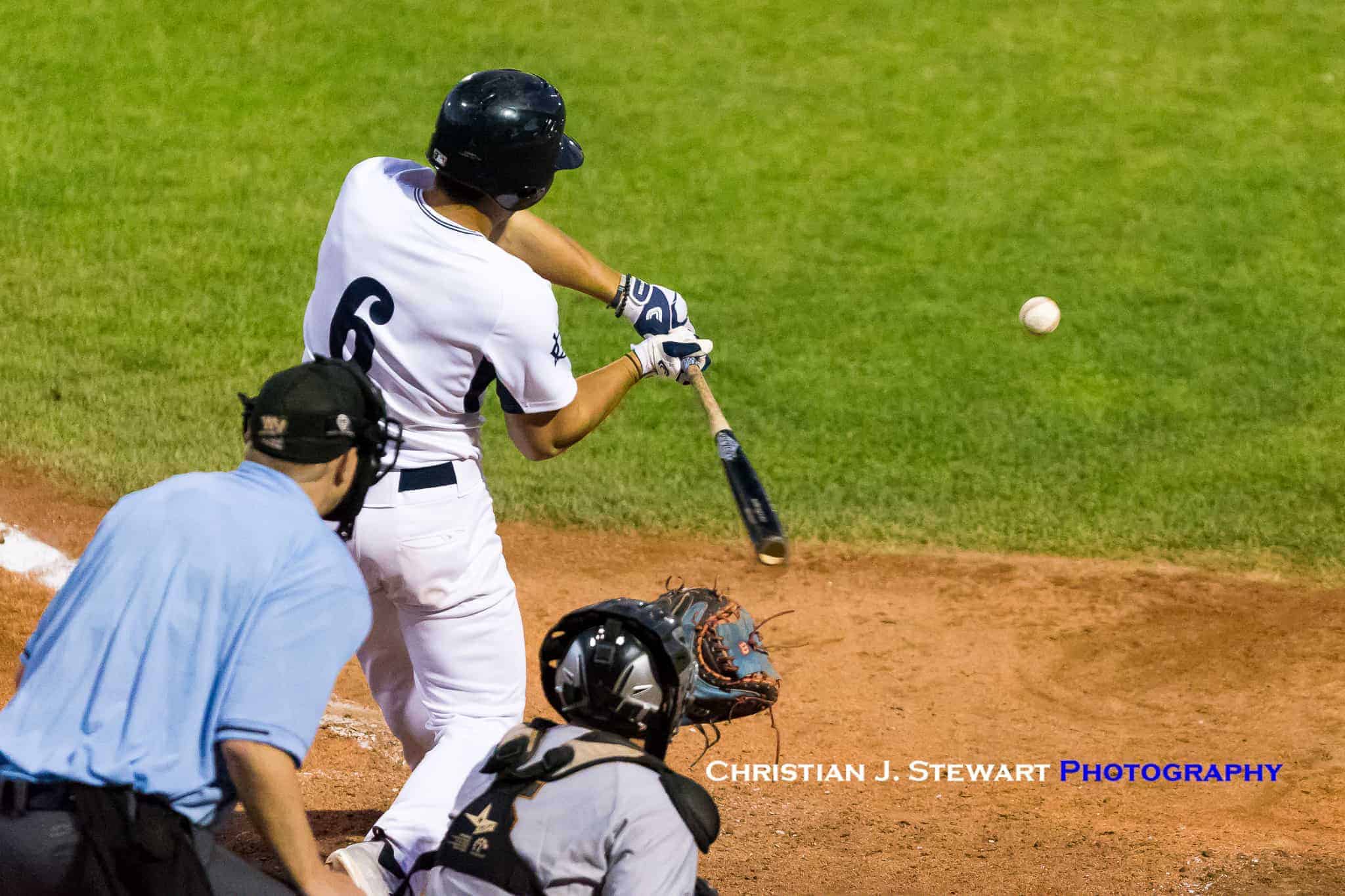 Noah Prewett swings at what would be the game winning hit in the 12-11 win over Cowlitz on Thursday (Photo: Christian J. Stewart)

The dramatic comeback, in a game that featured 10 different pitchers – five for each team – and 36 hits – 21 for Cowlitz and 15 for Victoria – gave Claire Eccles, who entered the game and pitched the top of the ninth, the win, her first ever in the WCL and sent the just over 1,000 fans in attendance home with big smiles on their faces.

Victoria started Xavier University’s Matt Kent on the hill and he acquitted himself well, working his way out of trouble a few times and escaping with a 1-1 tie through his three innings of work, giving up five hits in the process. 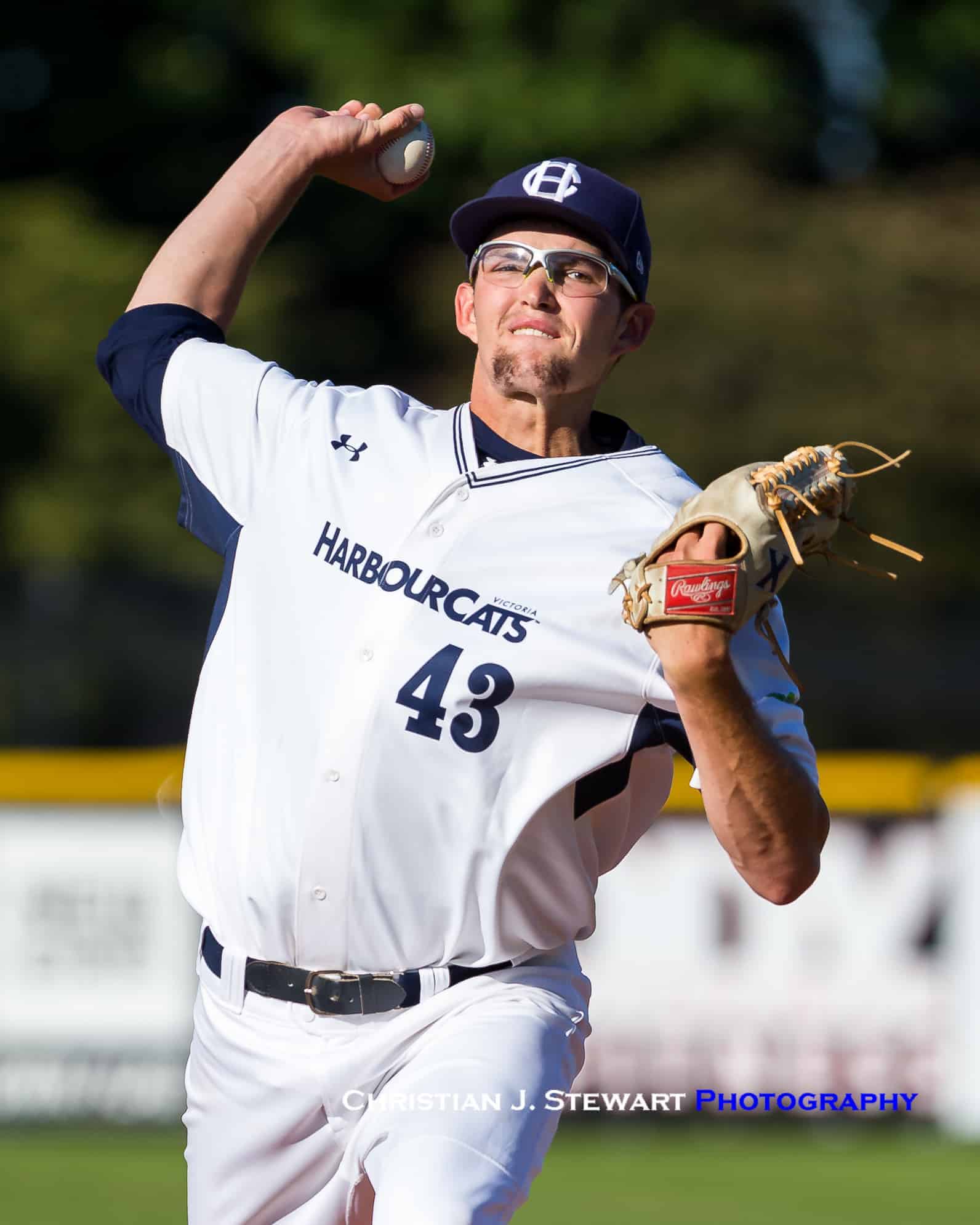 On a night when Cowlitz scored 11 runs and banged out 21 hits, Victoria starter Matt Kent should be relieved that escaped after three innings with just a single run given up on five hits (Photo: Christian J. Stewart)

The HarbourCats actually gave Kent a 1-0 lead in the bottom of the first, thanks to an RBI double from Kevin Collard off Bears starter Davis Baillie that scored Hunter Vansau, but the Black Bears would get that run right back in the top of the second on a Jace McKinney single that scored Nick Roberts. 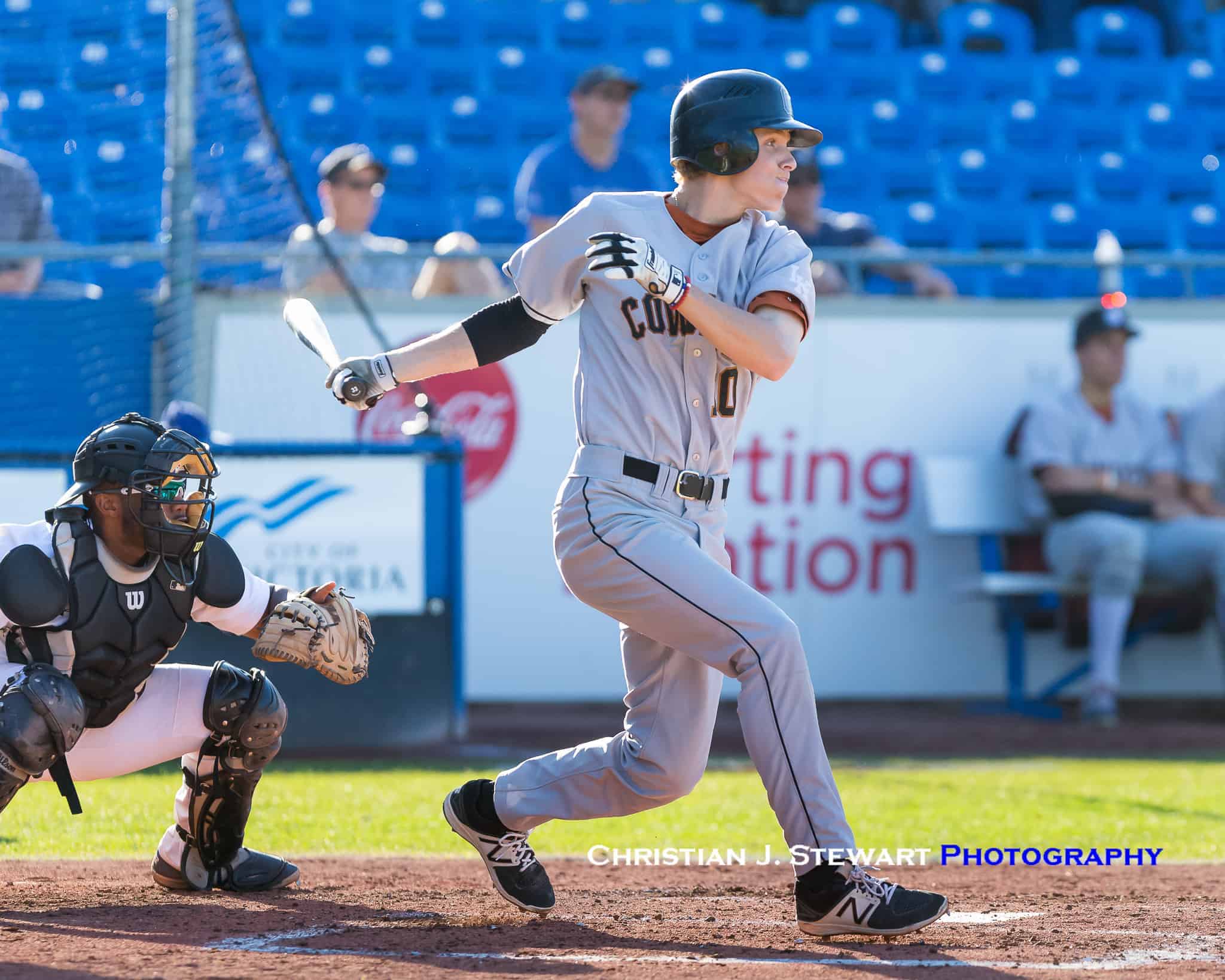 Cowlitz’s Jace McKinney would be one of seven Black Bears with multi-hit nights in the 21-hit assault on Victoria pitching (Photo: Christian J. Stewart)

The Black Bears offence would kick into high gear in the middle frames, scoring three runs off reliever Jack Tagget in the fourth and another three off Connor Whitney in the sixth to open what seemed like an insurmountable lead. 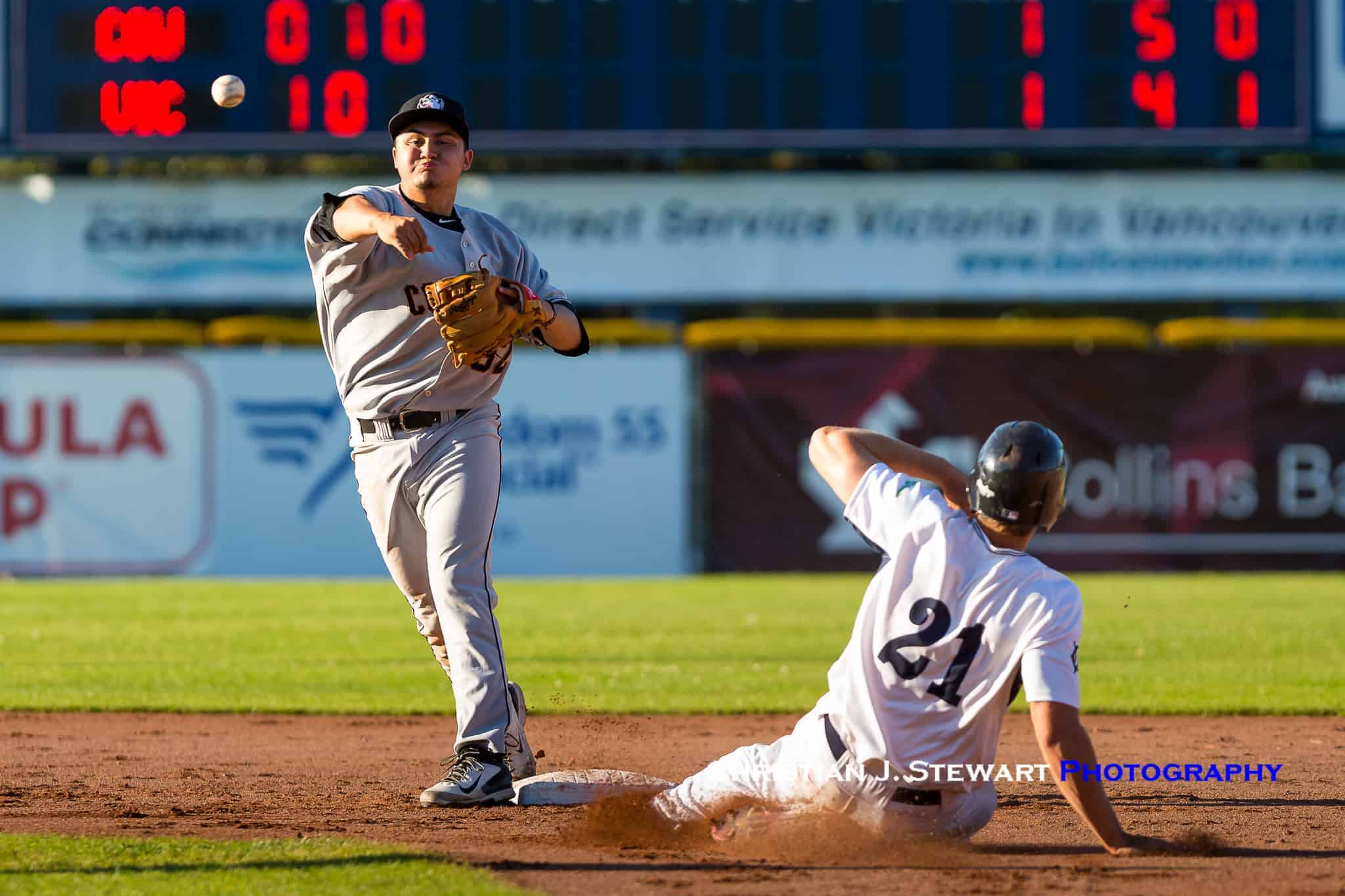 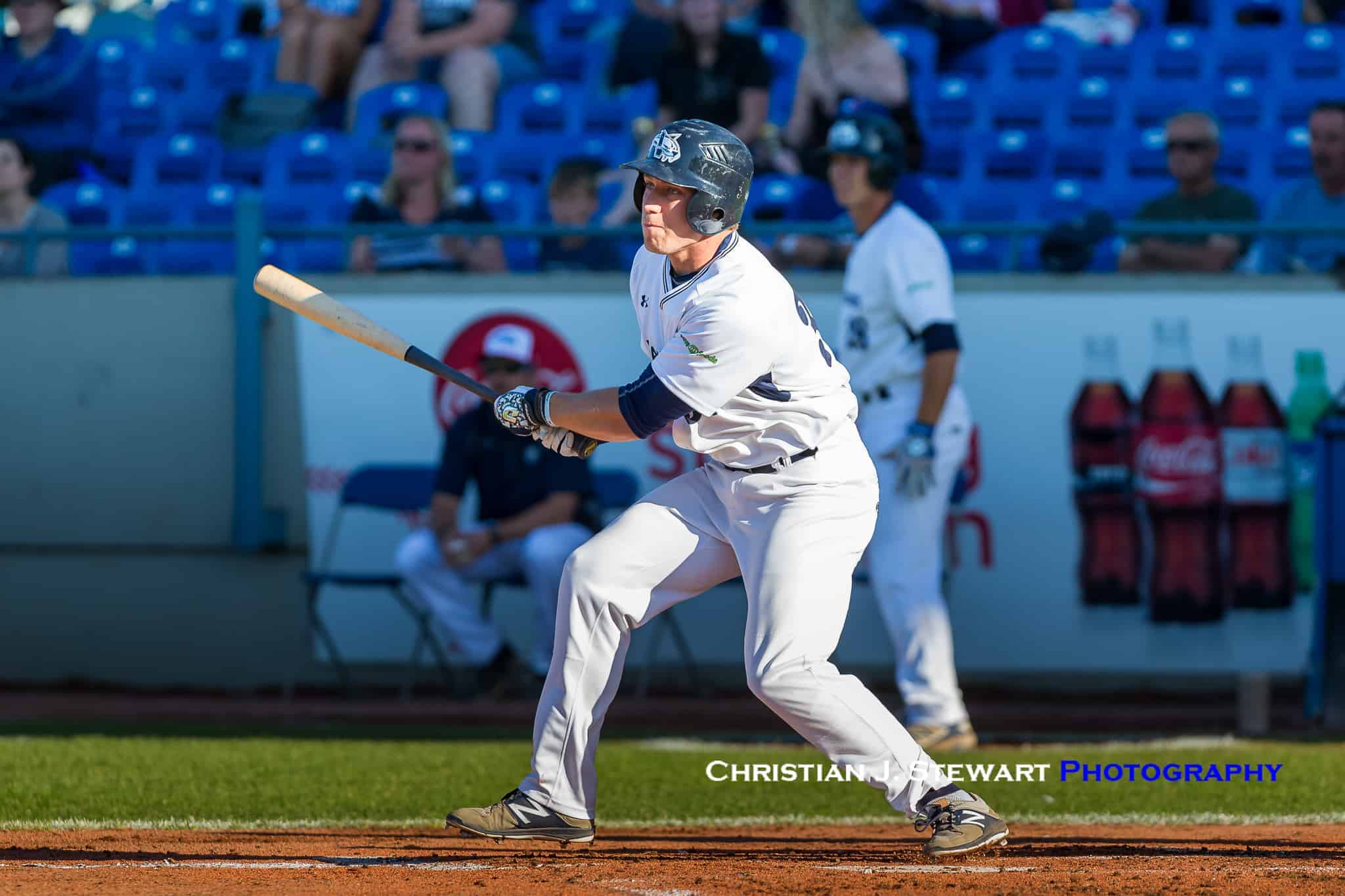 A Kona Quiggle two-run blast in the top of the eighth upped the Bears lead to 10-5, again seeming to dash any comeback hopes.  Victoria’s Tanner Rempel would get one of those back with a solo shot of his own in the eighth, but another Cowlitz insurance run in the top of the ninth, off HarbourCats Eccles, pushed the lead to 11-6. 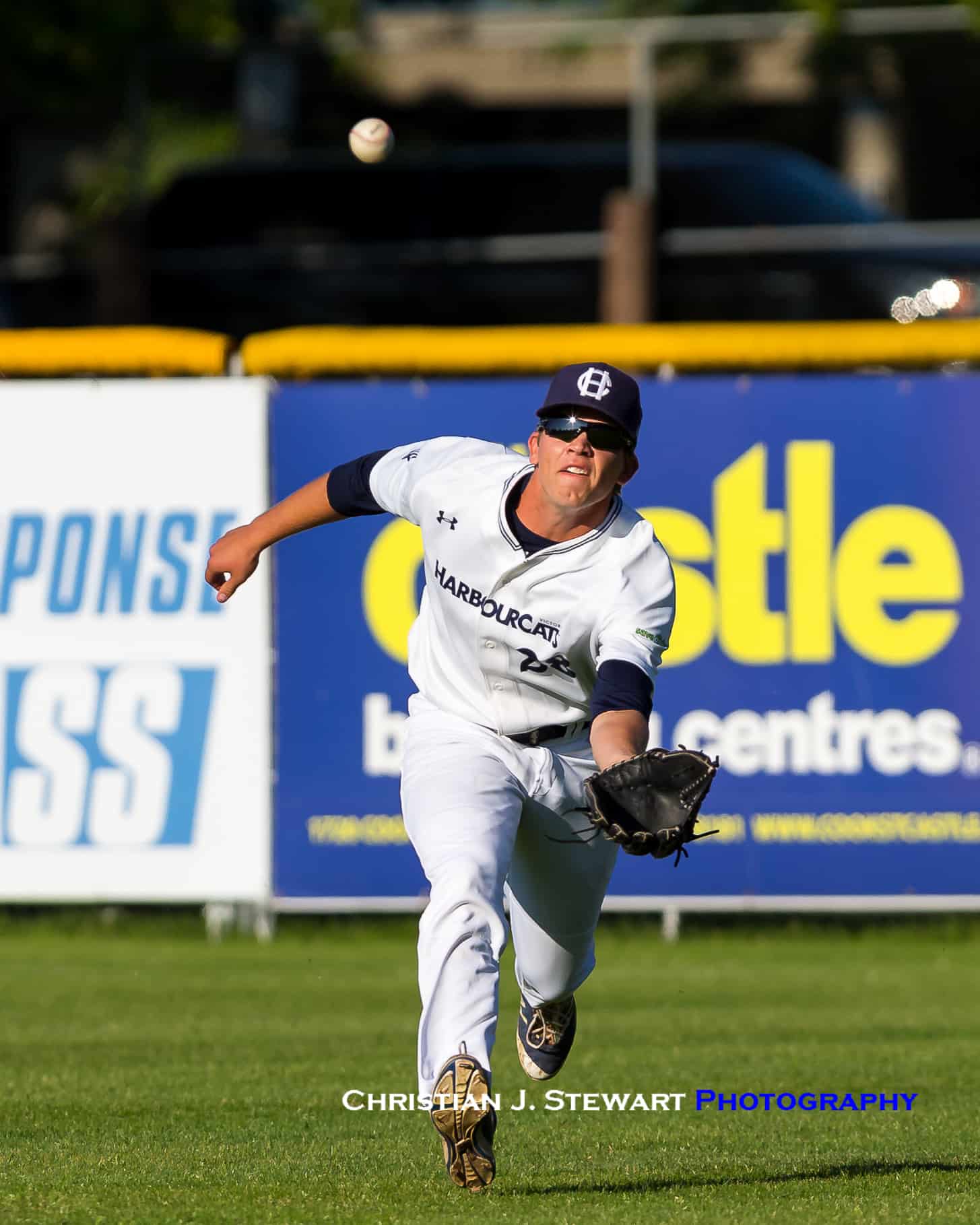 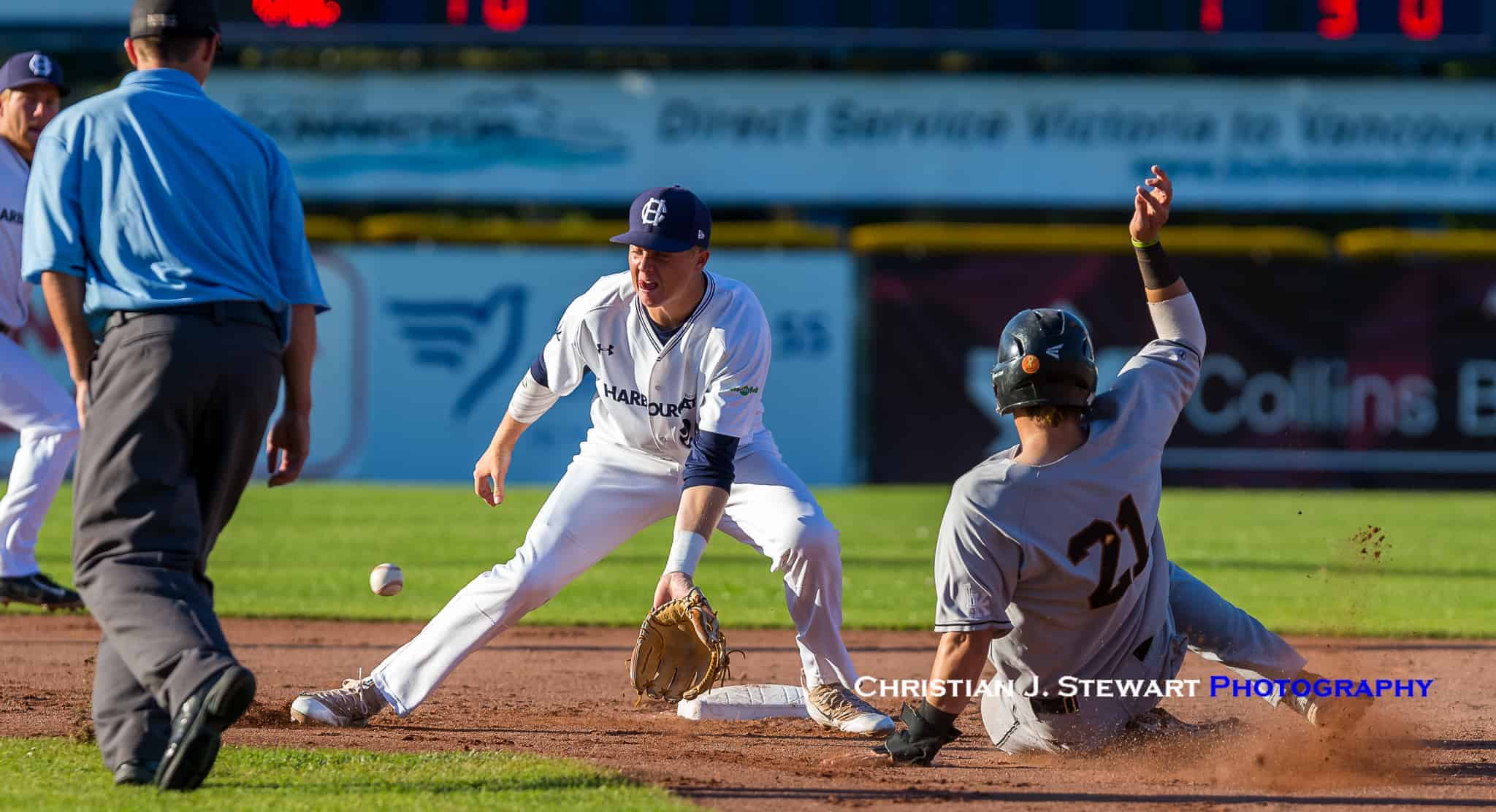 Cowlitz baserunner Kona Quiggle would be safe on this play as the ball would skip away from Victoria second baseman Cole Weiss (Photo: Christian J. Stewart)

Enter Ethan Lopez who was hit by a pitch and newcomer Andrew Shaps who walked, with both advancing on a wild pitch from Cowlitz reliever Kevin West. After pinch hitter Po-Hao Huang was hit by a pitch, Lopez would then come in to score on another wild pitch tying the game 11-11.

That set the stage for Noah Prewett, who after fouling off four pitches in a row, stroked a base hit, his second of the night, to score Shaps and give the HarbourCats and Eccles the incredible win. 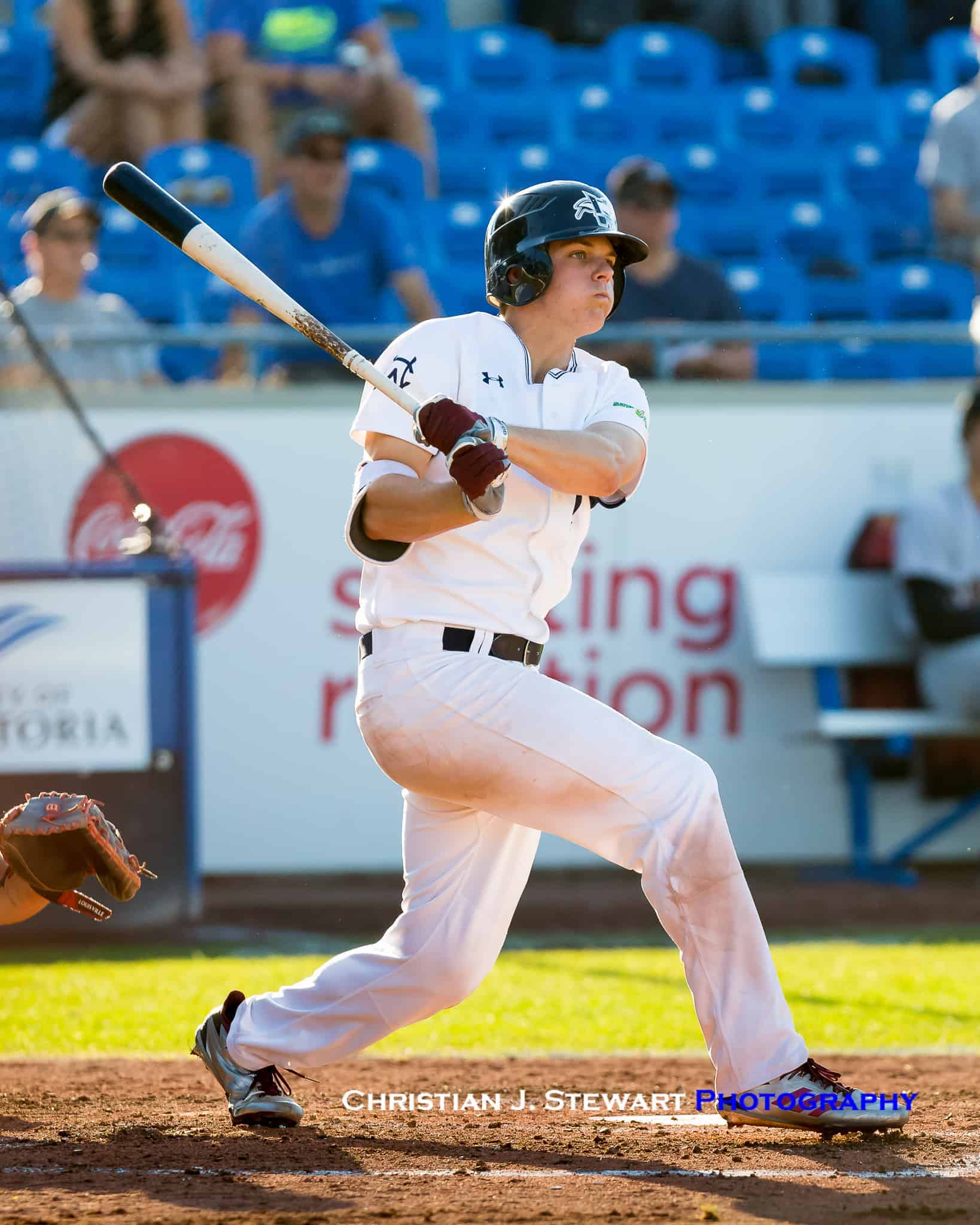 Victoria’s Hunter Vansau had a monster night at the plate with four hits, including his first ever collegiate home run, to help the HarbourCats to a comeback 12-11 win Thursday over Cowlitz (Photo: Christian J. Stewart) 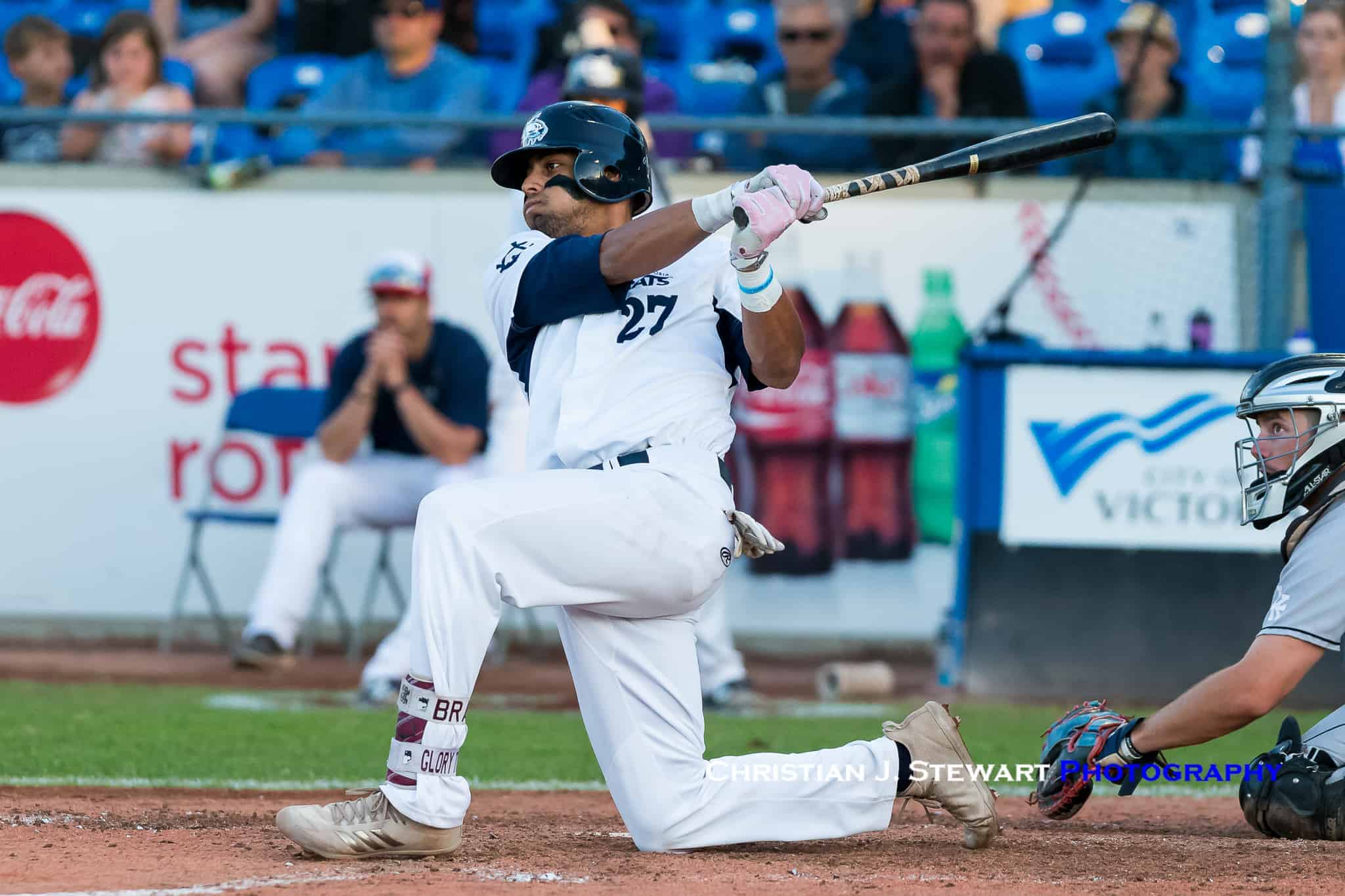 Victoria’s Harrison Brag would have a three hit night including this one from his knees in the 12-11 win over Cowlitz on Thursday (Photo: Christian J. Stewart)

The HarbourCats comeback also put a bit of a dent in the Black Bears first-half South Division playoff hopes, as in a quirk of WCL scheduling, heading into tonight’s action, Cowlitz still had six games to play in the first half and at 3.5 games back of Corvallis in the South Division, have a mathematical shot at the Division title.  Thus, every game for them in this series has some deeper meaning and tonight’s loss hurt those chances significantly, as they now fall four games back of the idle Knights. 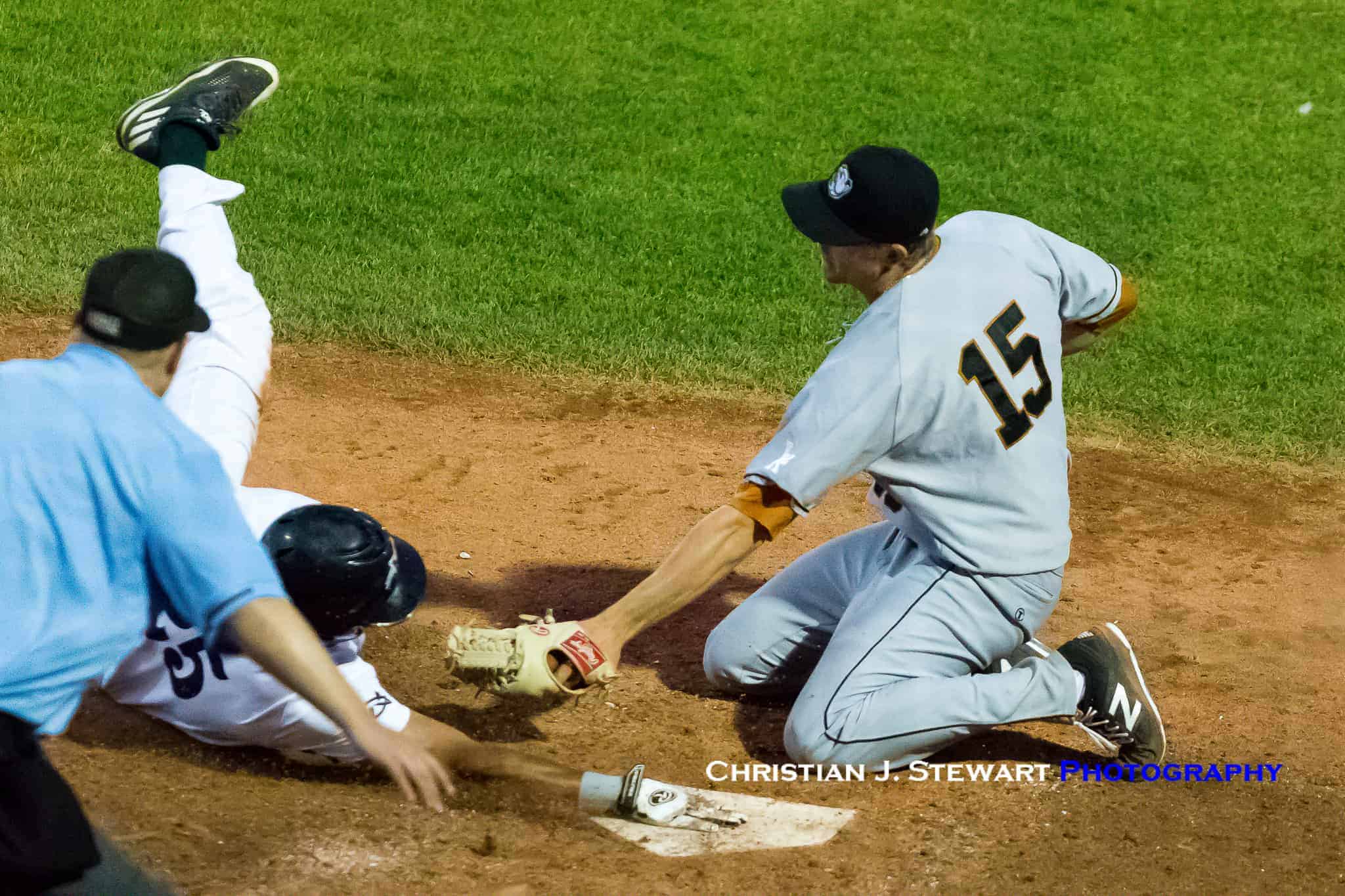 Victoria base runner Ethan Lopez just sneaks his hand past the tag of Cowlitz pitcher Kevin West to score the tying run on a wild pitch in the bottom of the ninth inning (Photo: Christian J. Stewart)

Victoria on the other hand, had just two games remaining in their first-half schedule and given that they started the night 3.5 games behind Division leading Kelowna (15-9), they have no chance of winning the first-half title, so tonight’s win will go down as an incredible character builder and a game that will get them nicely prepared for Friday’s Fireworks NIght and then Saturday’s matinee finale with Cowlitz that will will be the ‘Cats first game of the second half and one that then counts toward a possible second-half Division win and ultimate playoff spot.

Game time for Friday’s match is set for 6:35 pm with Isaac Mullins getting the start for Victoira while Corbin Powers goes for Cowlitz.  After the game, fan will be treated to an 18-minute fireworks show, which many feel is one of the best around.

Saturday’s Canada Day matinee starts at 1:05 pm and the ‘Cats will roll out 3-0 Adam McKillican while Cowlitz will start Nico Tellache.