July 7, 2017, Victoria, BC – The Bend Elks roughed up Victoria HarbourCats starter Isaac Mullins for six runs and 11 hits en route to a 11-2 win Friday night in West Coast League action in front of 2,143 fans at Royal Athletic Park in Victoria. 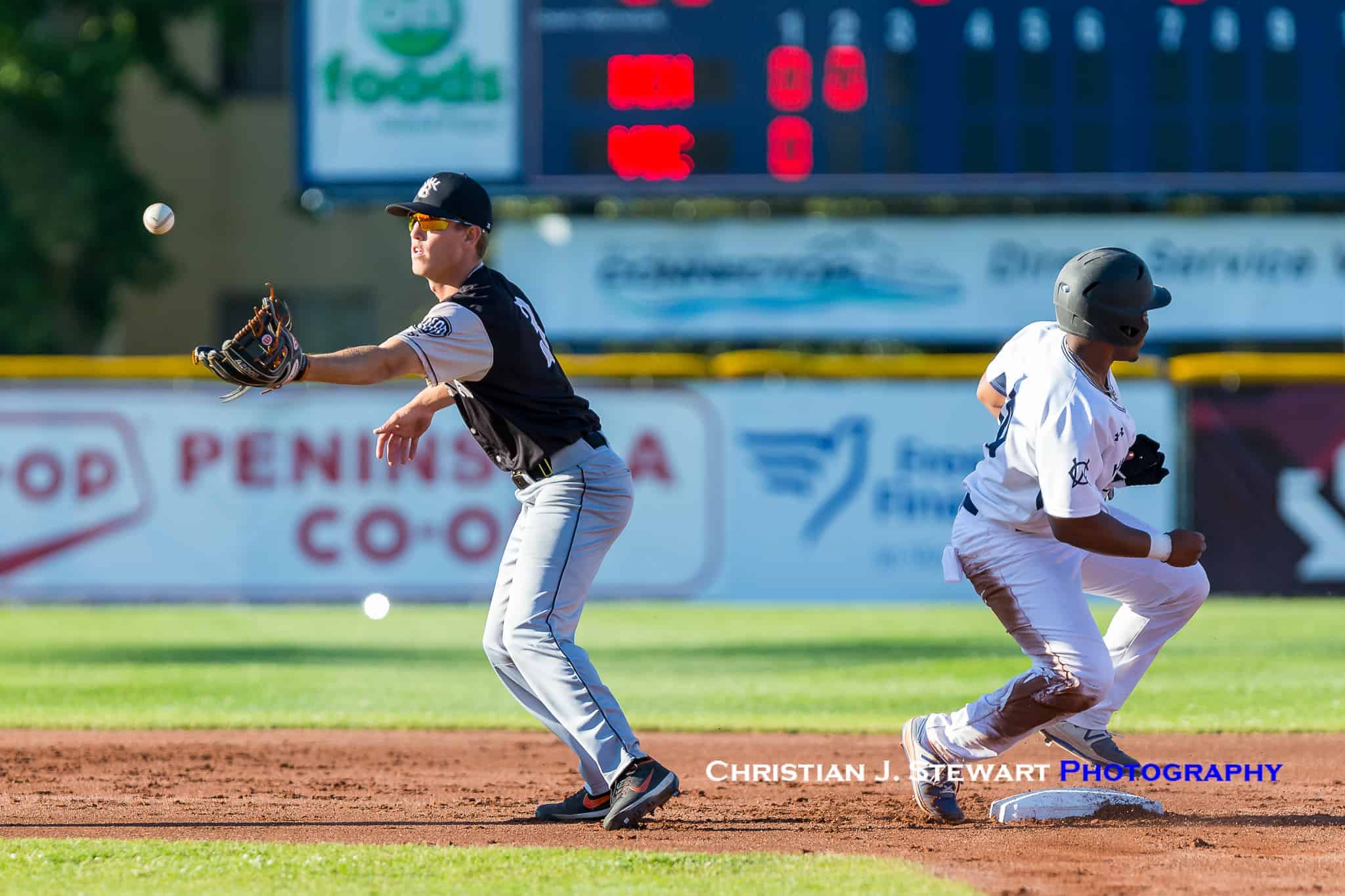 The Bend defence bobbled early but did not break, allowing just two runs on the night to the potent HarbourCats offence (Photo: Christian J. Stewart)

The Elks win stopped the HarbourCats second-half win streak at four and their overall win streak at eight, following recent sweeps of Cowlitz and Kelowna and taking the final two of three from the Knights in Corvallis. 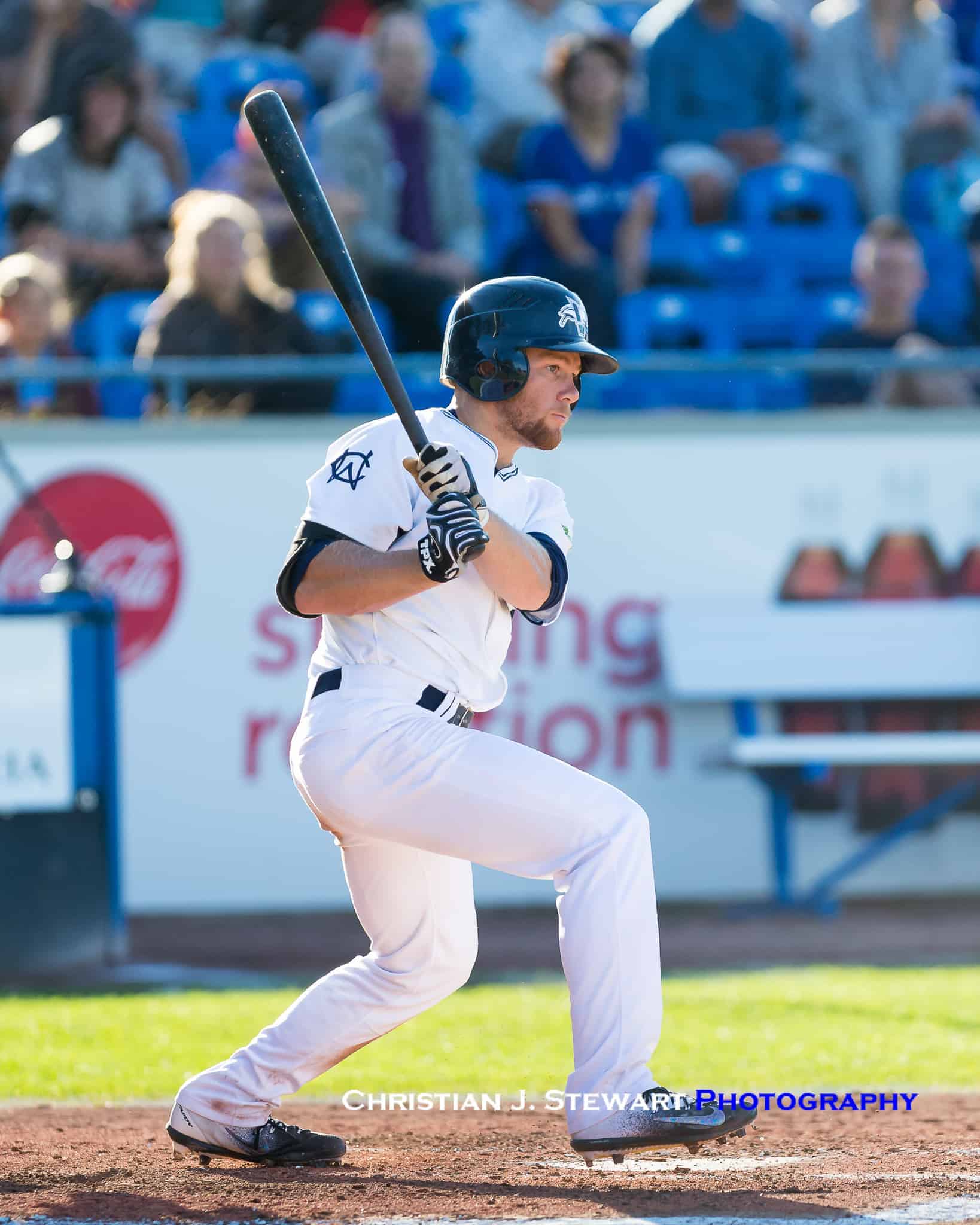 Harry Shipley’s 2-RBI single in the second was the only offence for the HarbourCats on Friday in the loss to Bend (Photo: Christian J. Stewart)

The HarbourCats looked good early, jumping into a second inning 2-0 lead thanks to a two-RBI single from Harry Shipley, but then watched as the Elks scored four runs in the fourth and another two in the sixth to open up the 6-2 lead. 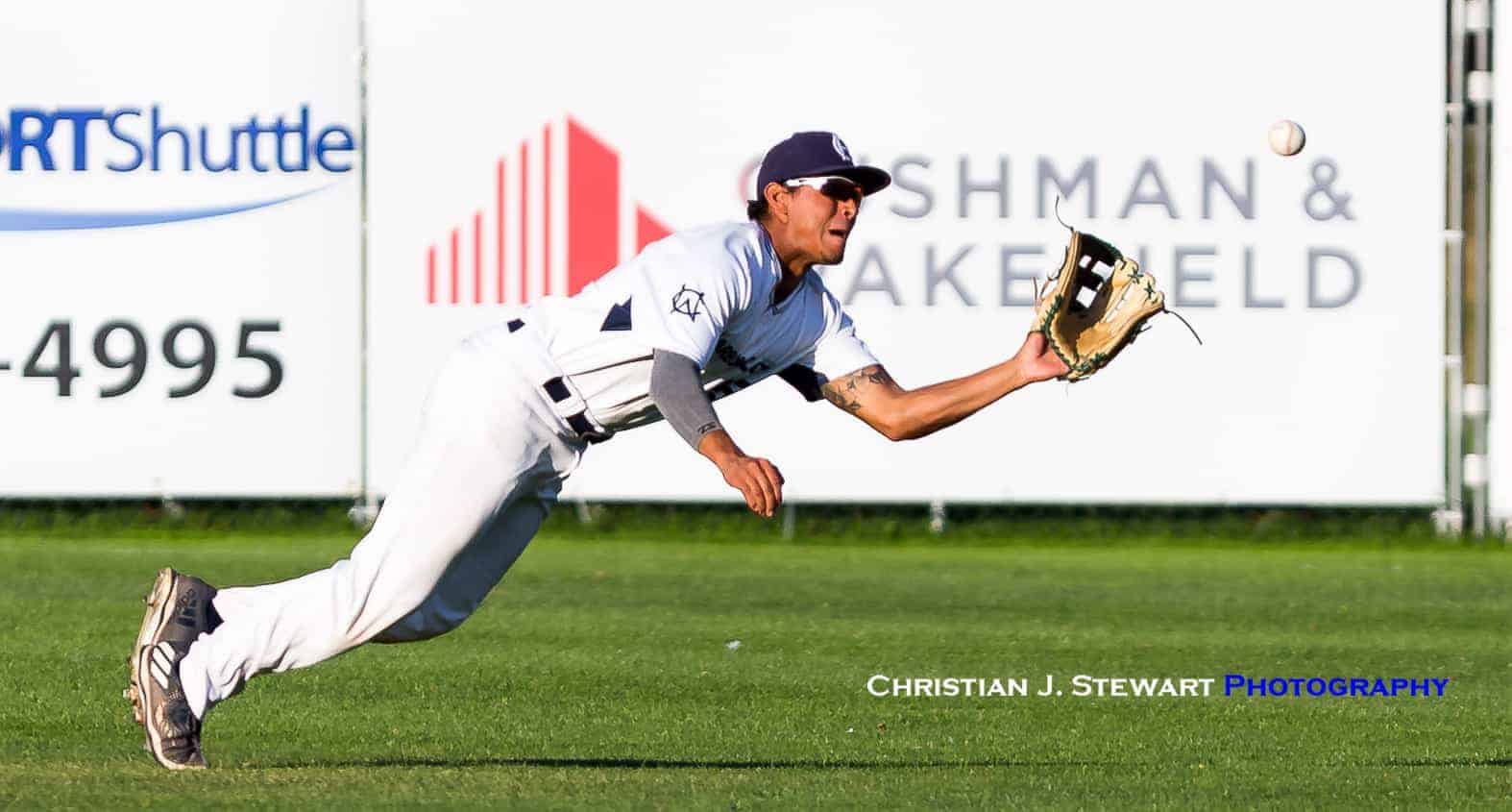 Ethan Lopez makes a great catch on this play in one of the defensive highlights for the HarbourCats (Photo: Christian J. Stewart)

The HarbourCats didn’t help themselves in either of those innings, giving up three official errors and allowing Elks runners to reach or advance on at least three other plays that could have been called either way. 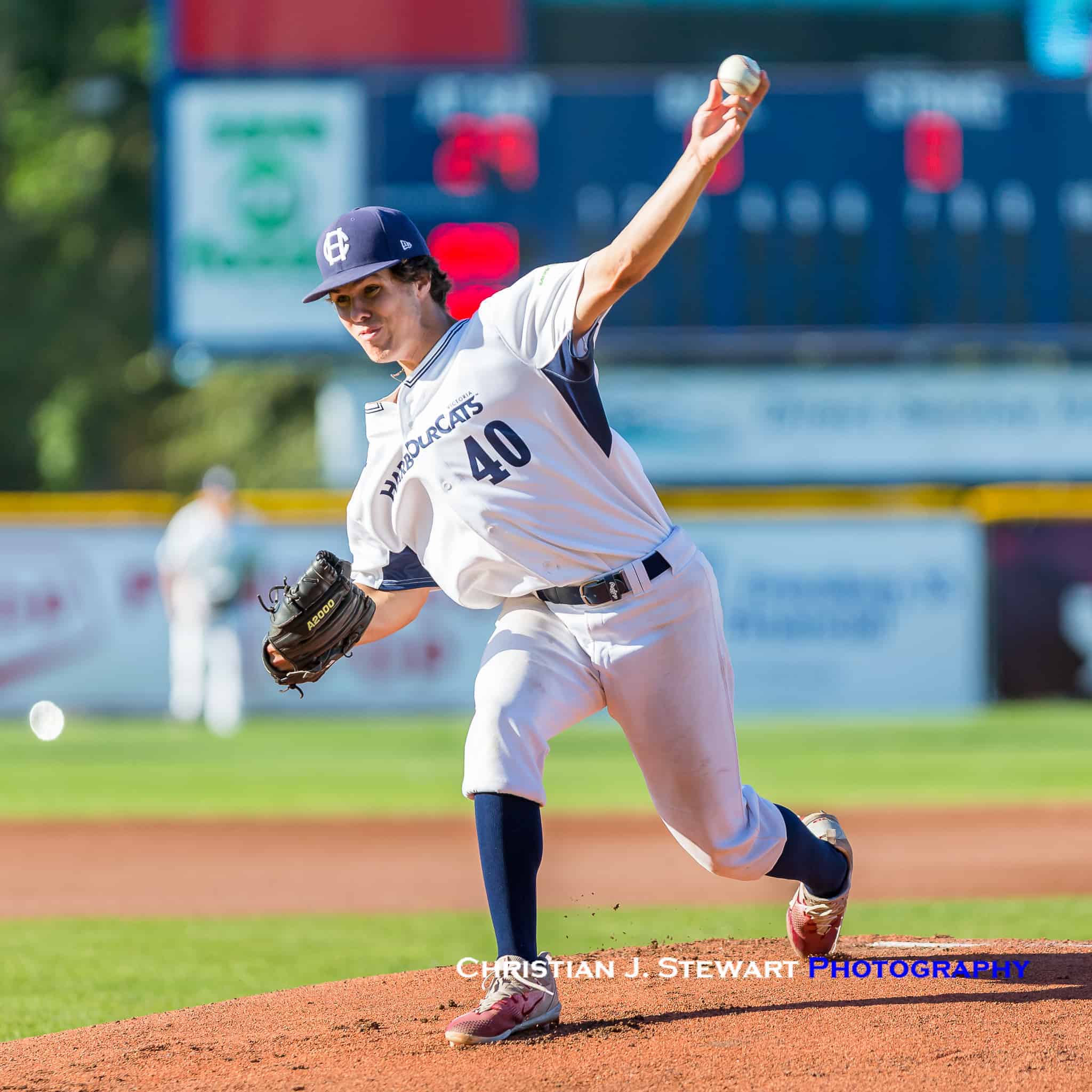 Starter Isaac Mullins would get roughed up for 6 runs (3 earned) on 11 hits in the loss to Bend on Friday (Photo: Christian J. Stewart)

On the mound, Elks side-arm starter Kris Jackson baffled HarbourCats batters all night, giving up those two runs on just four hits through eight innings of work. Hunter Vansau, with an infield single, Kevin Collard and Ethan Lopez were the only other HarbourCats to find their way on via hits against the tough right-hander.  Matt Kirk pitched the ninth, giving up a double to Nick Bellafronto, but nothing else to close out the 11-2 win. 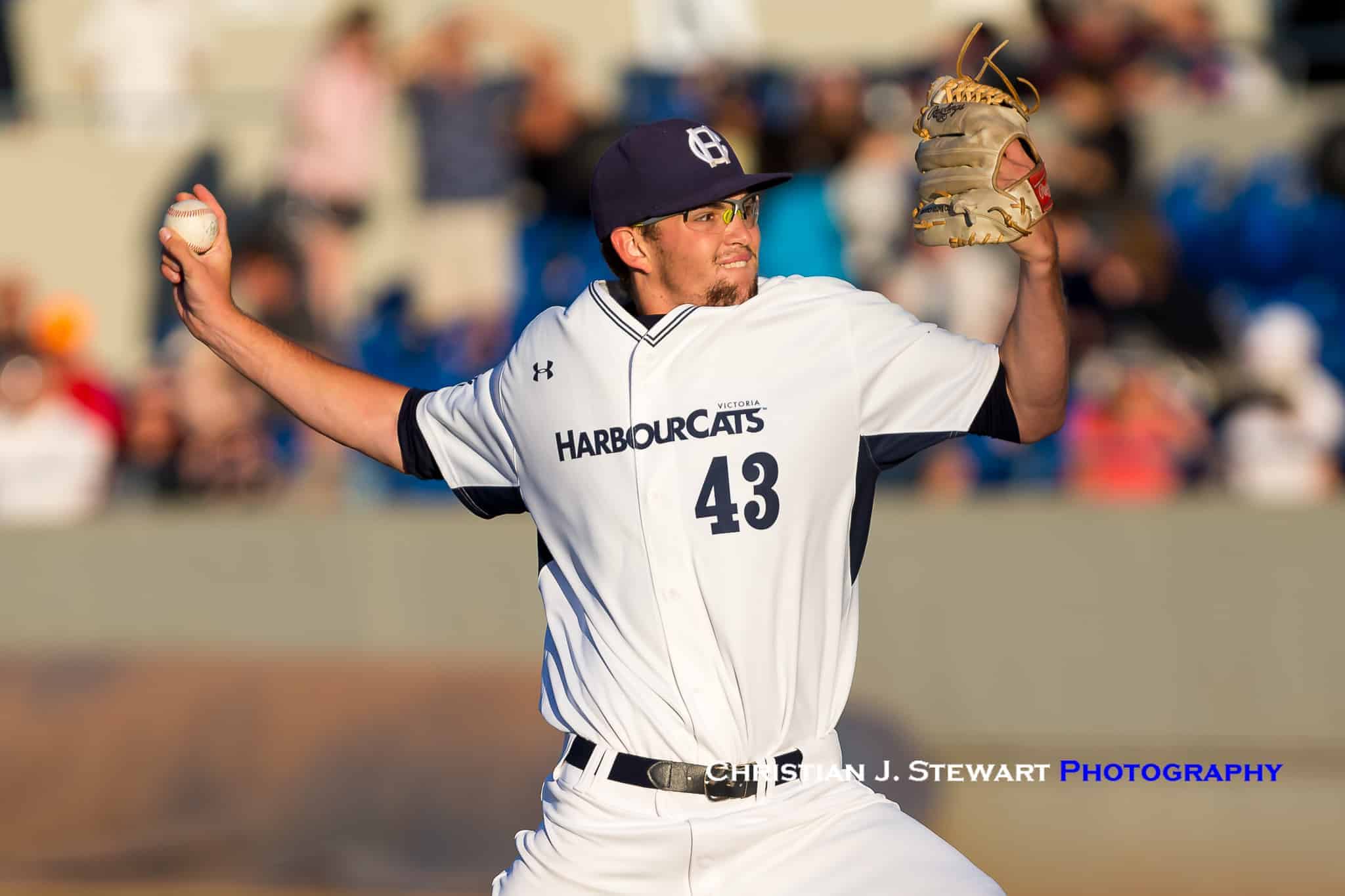 Matt Kent was a bright spot on the mound Friday, giving up just a hit in two innings of work (Photo: Christian J. Stewart)

For Victoria, Mullin’s night was over after the sixth (6 runs, three earned, 11 hits, one walk and four strikeouts) and he gave way to Matt Kent who sailed through two innings, giving up just a hit, and then Claire Eccles, who pitched the top of the ninth and did not fare well, walking home a run and giving up a grand slam to Bend’s Bryce Rogan that put the game well out of reach. 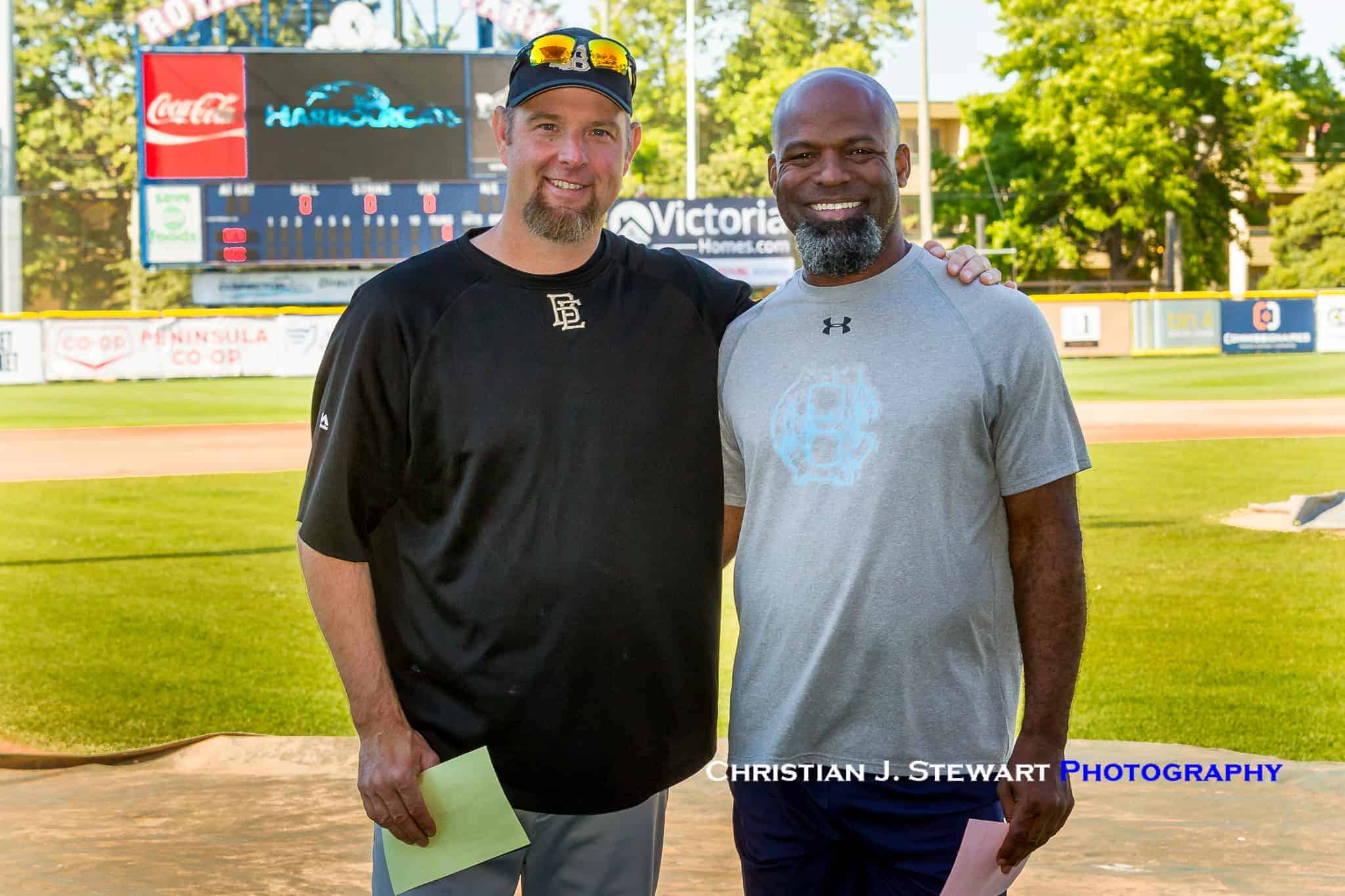 Bend manager Alan Embree (left) and HarbourCats manager (Brian McRae) made history Friday by becoming the first former MLBers to manage against each other in a WCL game (Photo: Christian J. Stewart)

Leading the 14-hit offense for the Elks was Rogan with his slam and George Mendazona who had a pair of hits, a pair of RBIs and two runs scored. Derek Chapman had three hits and an RBI, while Colin Runge and Colton Cosner each chipped in a pair of hits and a run scored.

The HarbourCats and Elks continue their series on Saturday night with a 6:35 pm start and then close out the series on Sunday afternoon with a 1:05 pm matinee start on Harvey the HarbourCats’ birthday.