Like this dog with the VicPD’s K9 team in the pre-game festivities on Forces Friday, the Bells took a bite out of the HarbourCats to keep their postseason hopes alive for another night (Photo by Christian J. Stewart)

VICTORIA —  With a division pennant on the line, the Bellingham Bells kept their postseason hopes alive with a  12-2 victory over the Victoria HarbourCats (17-8) and postponed any playoff celebration Friday evening at Wilson’s Group Stadium at Royal Athletic Park.

Looking to clinch their first WCL North title since 2017, and their third playoff appearance in four seasons, the HarbourCats will now have to win one of the final two games of the First Half schedule to win the pennant. 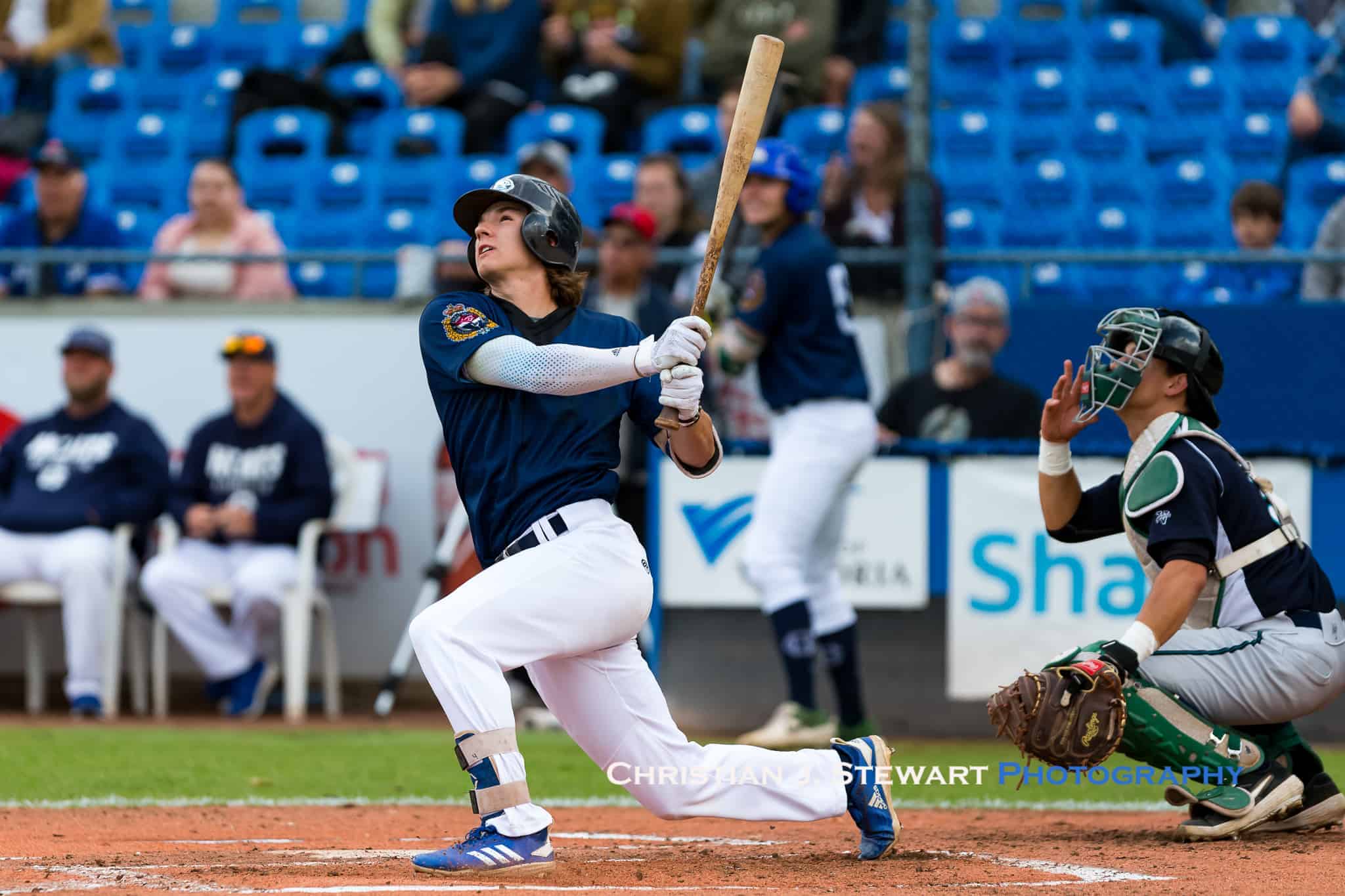 Jason Willow, wearing a white sleeve under the HarbourCats special Forces Friday VicPD uniforms, crouches down and follows the trajectory of his hit (Photo by Christian J. Stewart).

Bellingham, who were in the midst of a three-game losing streak before coming to Vancouver Island, exploded for 10 runs in the first four innings to climb within two games of Victoria for first in the division with two games remaining in the First Half schedule.

Victoria came into tonight’s game leading the WCL in both runs and hits, but mustered only three hits on the night as Bellingham starter Nick Proctor stymied the league-leading offence. Proctor, who retired eight HarbourCats in a row at one point, racked up six strikeouts and held Victoria to one hit over five innings in his fifth start of the season. 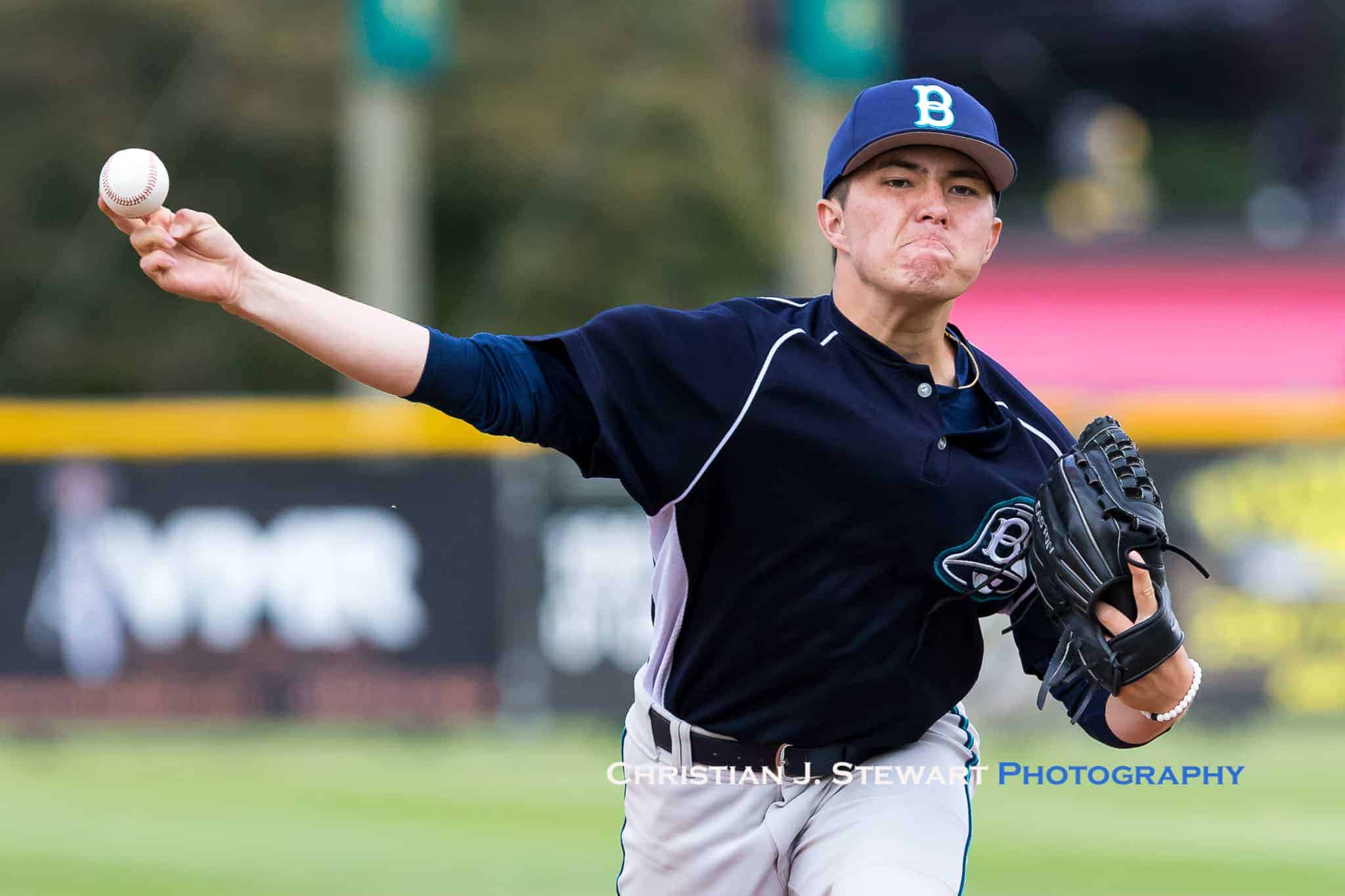 Bellingham starter Nick Proctor was dominant tonight, allowing only one hit and racking up six strikeouts in five innings of work (Photo by Christian J. Stewart).

On the opposing mound, Calvin Turchin got the start for Victoria, and received little help in the field against an aggressive Bells offence.

After he avoided trouble in the first with back to back strikeouts, Turchin loaded the bases to start the second inning but seemed on his way to avoid another inning unscathed. 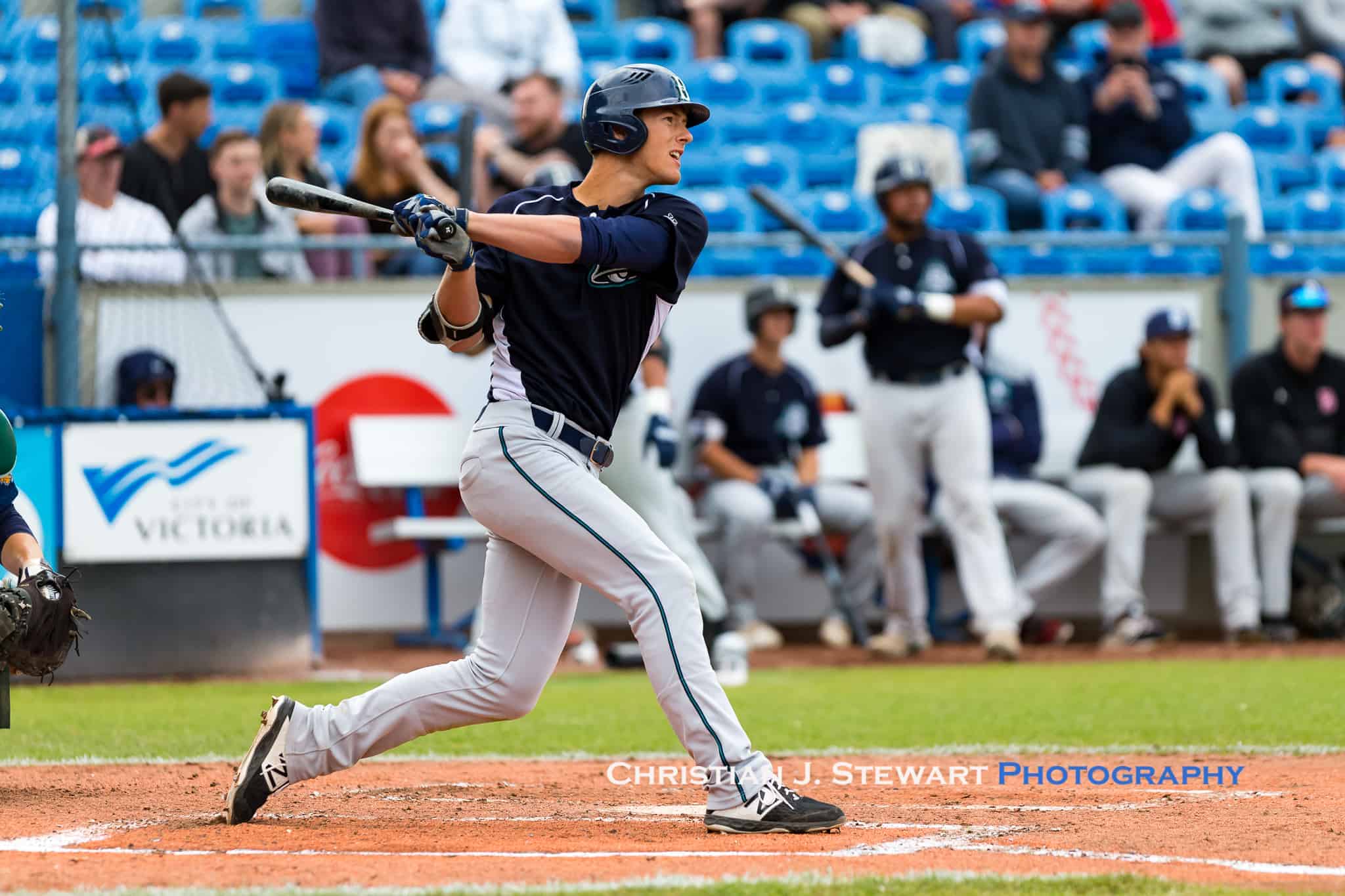 Cole Hinkelman had a hit and run in Bellingham’s rout of the HarbourCats tonight at Wilson’s Group Stadium.

The righty got back to back strikeouts again to collect two outs, and induced a routine ground ball to Tanner Haney that would have ended the frame. However, Haney botched the ball which allowed Bellingham to score a run and start a two-out rally.

The Bells would capitalize on the error one batter later, as Austin Kretzschmar’s two-run single propelled Bellingham into a three-run lead – all unearned.

Two innings later, while the HarbourCats struggled to get anything going against Proctor, the Bells blew the game wide open with a seven-run fourth. 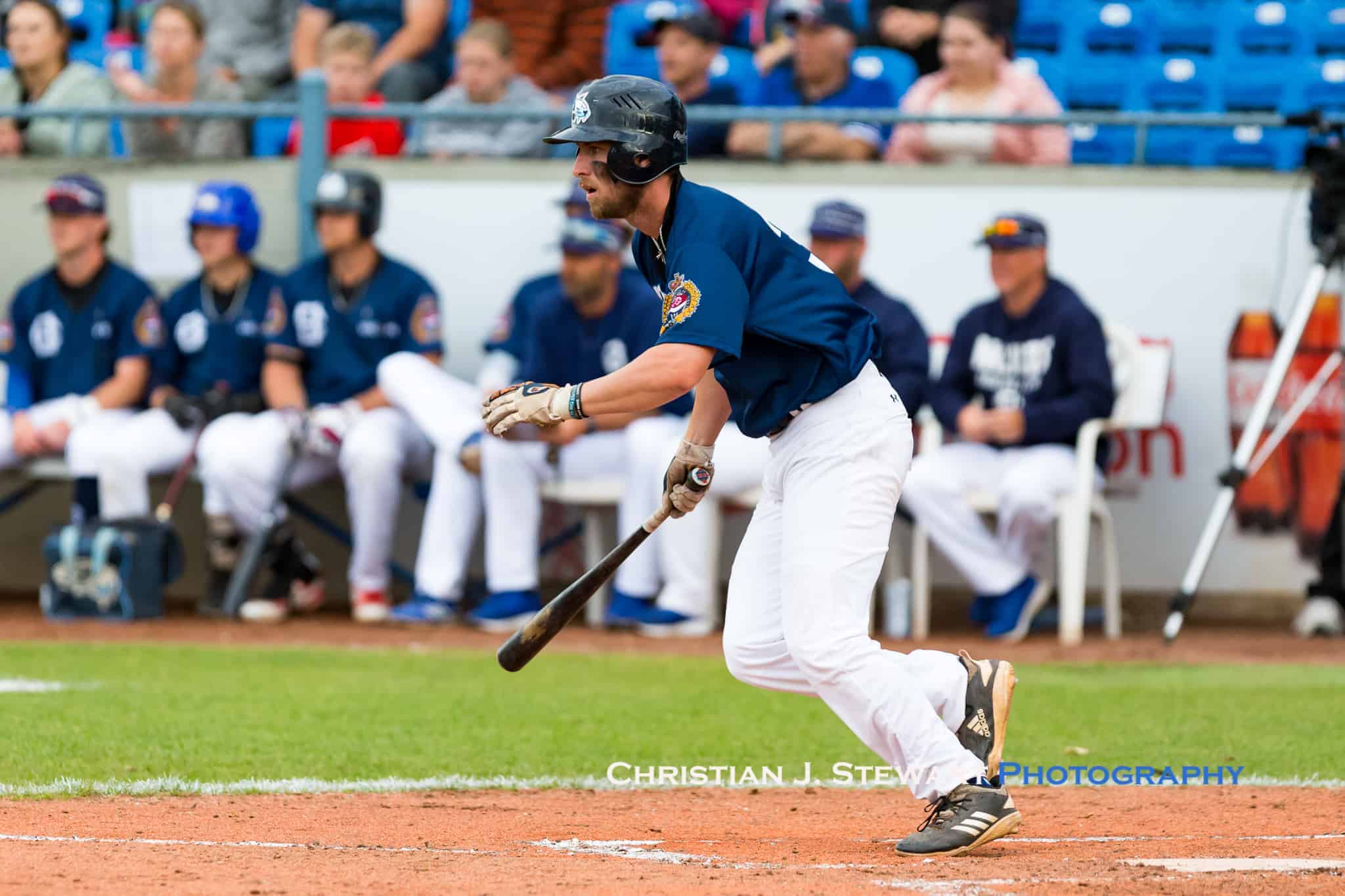 Griffin Paxton, with eye-black running down his face, prepares to sprint to first in the second inning tonight. (Photo by Christian J. Stewart)

Nick DeNicola led the frame off with a single, and Derek Marshall was able to reach one batter later on a ground ball that flew through legs of Griffin Paxton at third. Turchin then unleashed a wild pitch to advance both runners into scoring position, and walked Burns to load the bases which ended his night.

After Bellingham scored twice with the bases loaded, the WCL home run leader Troy Viola notched his first hit of the series to give Bellingham a 7-0 lead. Following up his teammate next in the order, Jack Machtolf capped off the frame with a controversial three-run homer over the left field fence. The ball appeared to pass in front of the right field foul pole to many in the audience, but was ruled fair and a home-run, by the first base umpire. 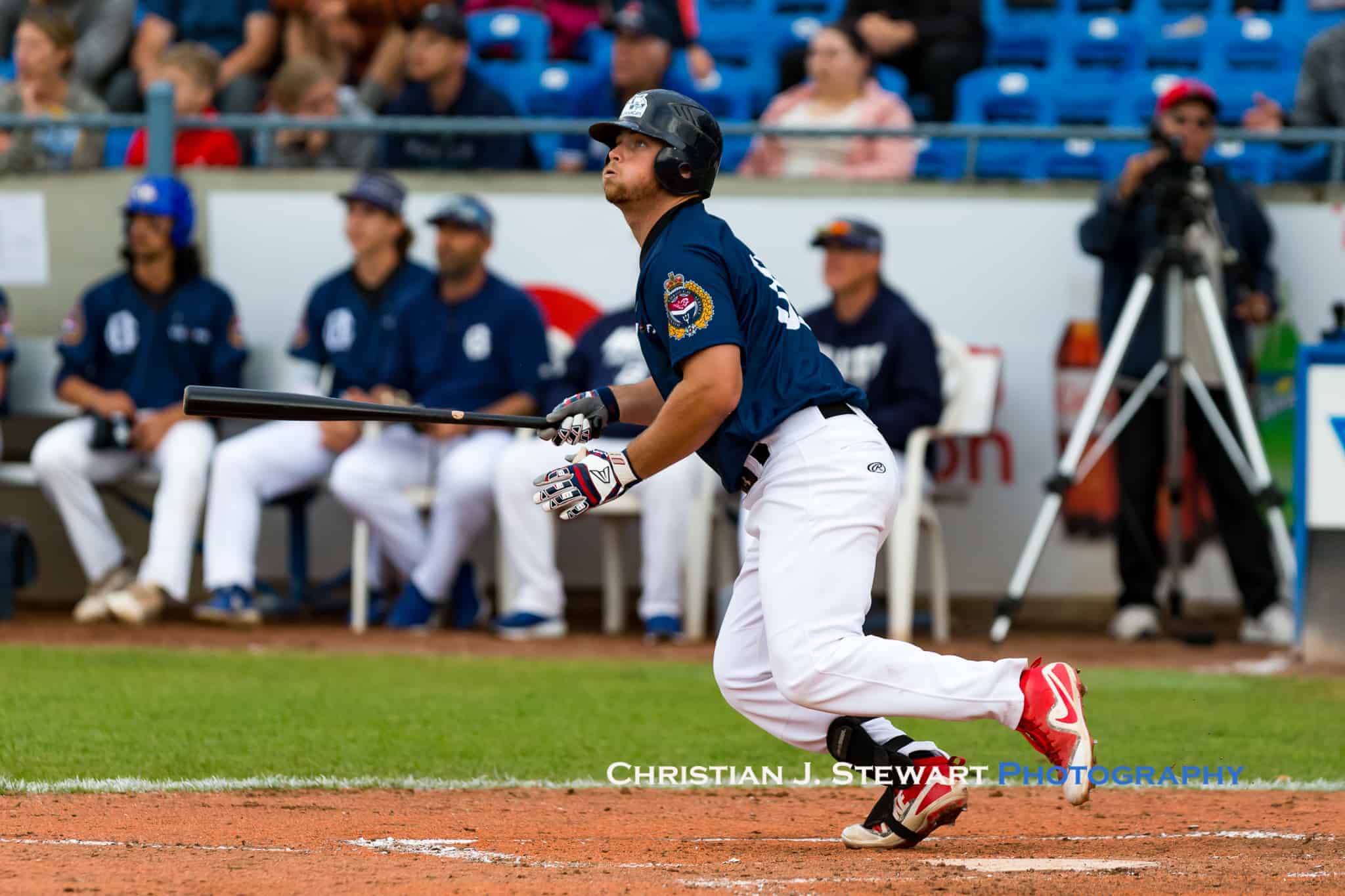 Emilio Nogales got Victoria’s first hit of the game in the third, a double off the wall. (Photo by Christian J. Stewart)

The HarbourCats ensured they wouldn’t end the night scoreless with a rally in the home half of the seventh, scoring twice after loading the bases again on Bells reliever Will Armbruester. But Bellingham scored again in the eighth, as the HarbourCats dropped their first game at home since June 8.

Victoria will look to rebound tomorrow night in game two of the series against the Bells, and send Jack Hyde to the mound in hopes of clinching the North division. First pitch is scheduled for 6:35p.m.