Aaron Celestino brought the fireworks early in the Canada Day matinee, dazzling through five innings on the mound—collecting a season high 10 strikeouts in Victoria’s 5-4 victory over the Kelowna Falcons. (Photo by Christian J. Stewart)

VICTORIA — The fireworks came early this Canada Day for the Victoria HarbourCats. Trailing by a run, and down to their final out in the 10th, Chase Wehsener came off the bench cold and smacked a game winning double to give the HarbourCats (17-7) their seventh consecutive victory and 5-4 walk off win over the Kelowna Falcons.

With the win the HarbourCats moved to a season best 10 games above .500 — the first time they’ve done so since 2016 — and gained a game and a half lead on the second place Bellingham Bells (14-7) in the WCL North standings. 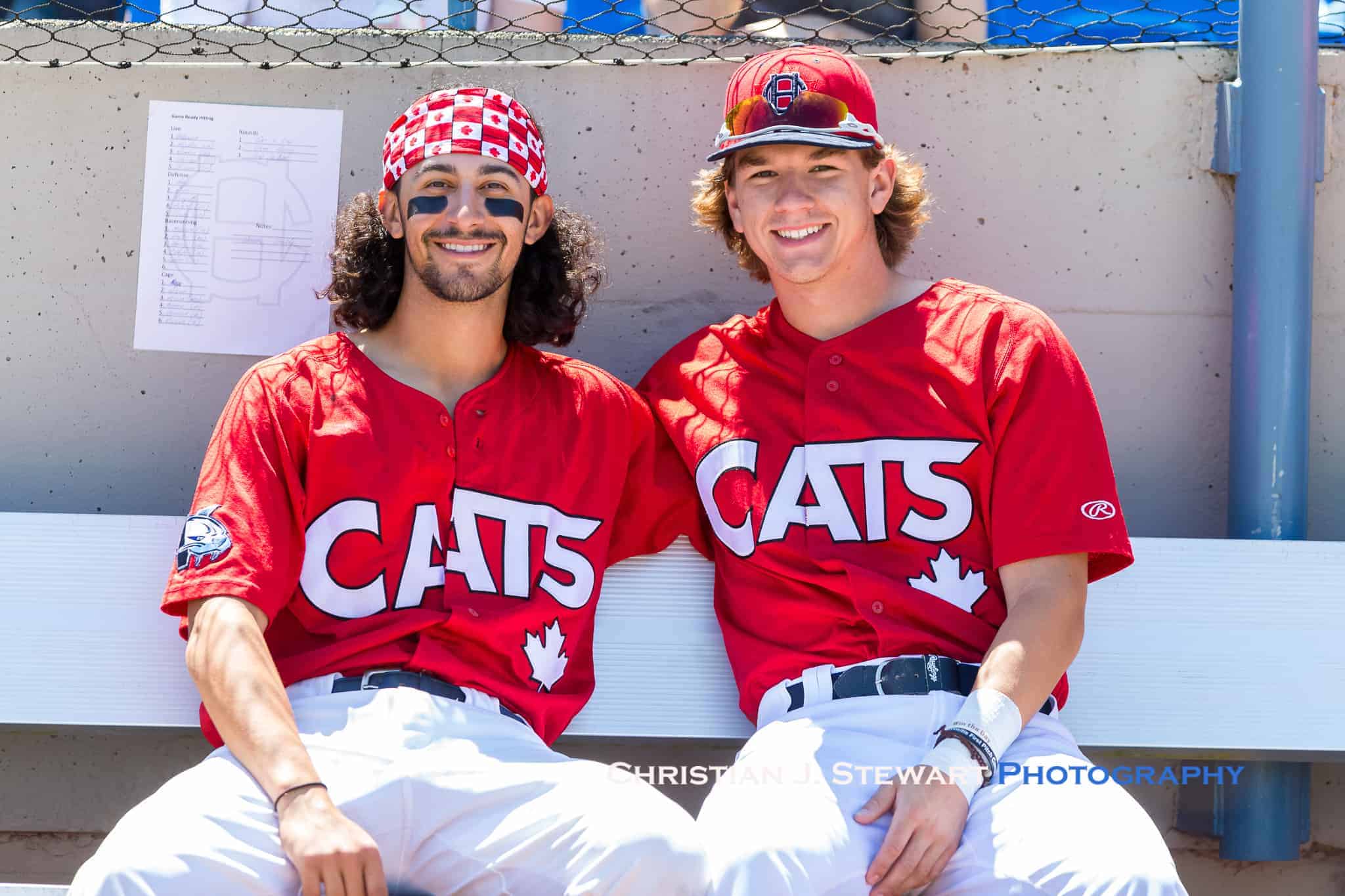 Nick Plaia (left) showing some Canadian pride, and Harrison Spohn (right) take a minute to pose for a picture in the pregame. (Photo by Christian J. Stewart)

The Bells will travel to Yakima Valley for a three game set starting tomorrow, while Victoria will take a quick hiatus from league play—returning to WCL action beginning Friday evening in a crucial weekend series against the Bells that will likely determine the First Half pennant.

Donning their Canada Day red alternates in front of a crowd of 2,073 in today’s matinee, Aaron Celestino dazzled the crowd with a dominant start on the mound. 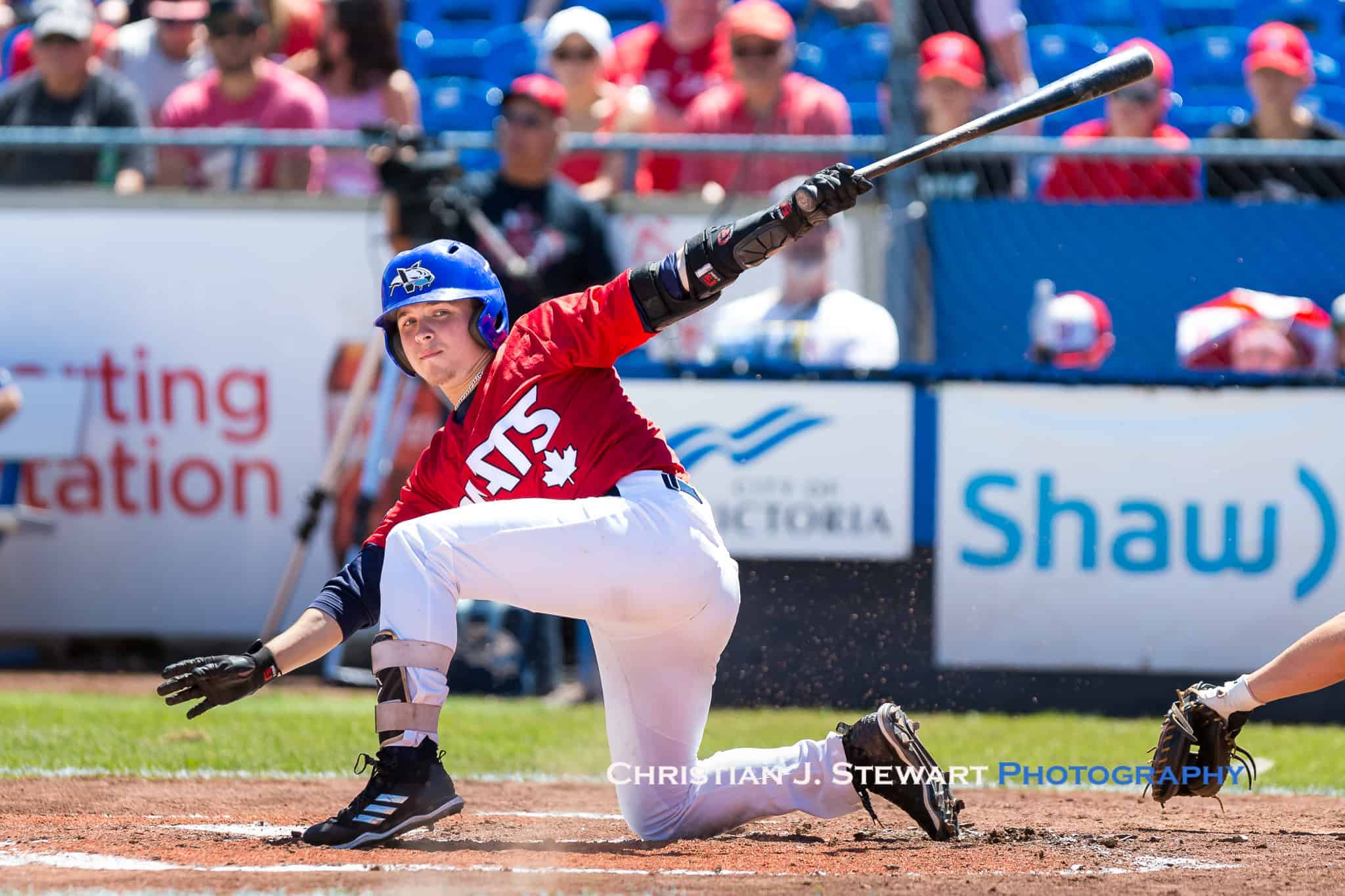 Nate Pecota goes down to one knee as he follows through on a foul ball earlier in today’s game. (Photo by Christian J. Stewart)

The righty out of Incarnate Word retired the first six batters he faced to start the game, collecting three strikeouts in the process. It wasn’t until the third inning when Kelowna recorded their first base runner of the game, but Celestino avoided any trouble with a pair of strikeouts. Celestino exited after five, allowing only five hits and collecting a season high 10 strikeouts in his fifth start of the year.

In the fourth, however, the Falcons finally got to the ‘Cats starter. Cole Cummings smacked a one-out single to start the rally, and after a pair of singles from Matt Voelzke and Marcus Guarin loaded the bases for Kelowna, Celestino hunkered down to gain his sixth and seven strikeouts on the day to leave the frame unscathed. 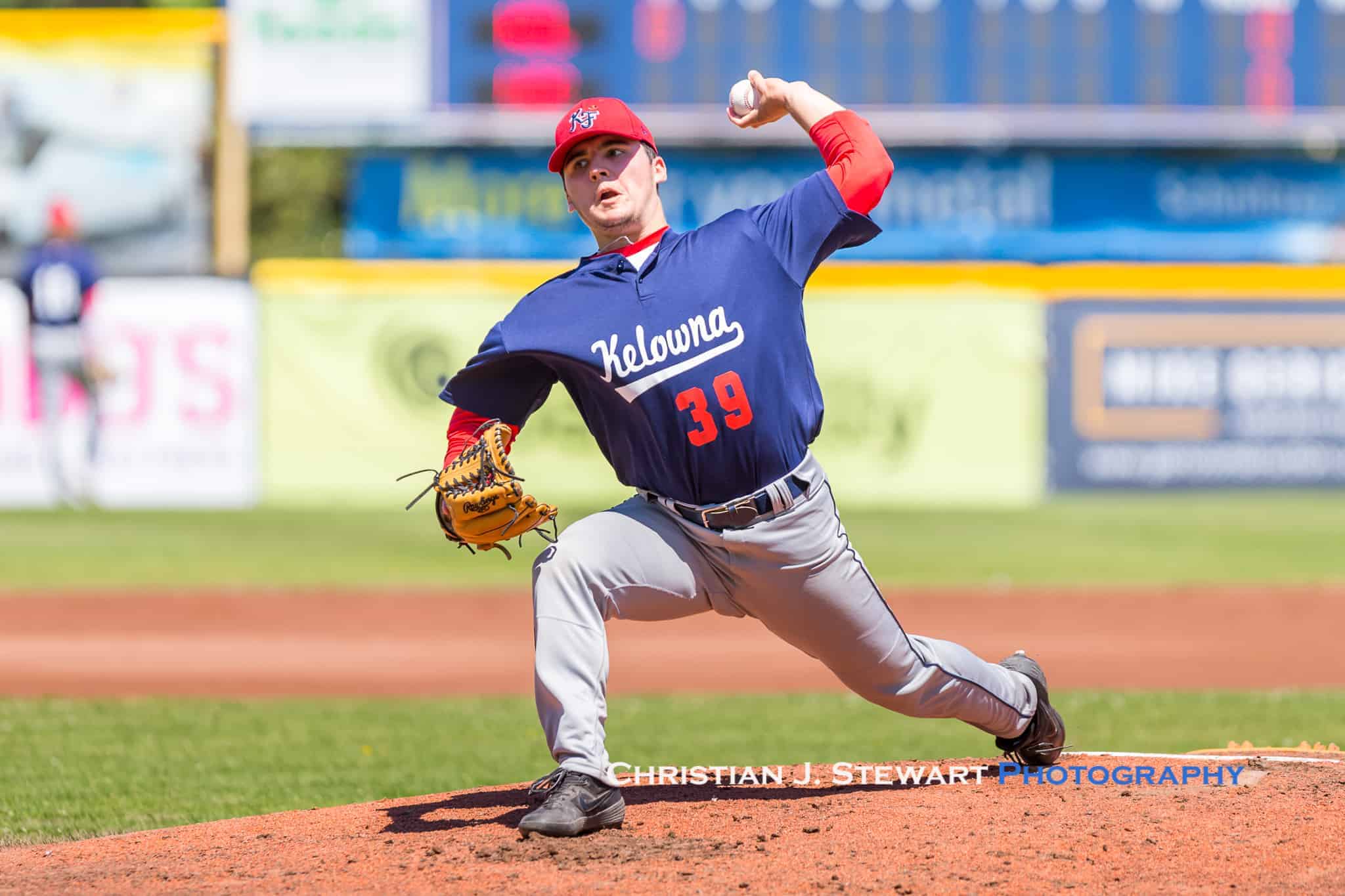 Kelowna starter Nick Nygard was effective in his first start of the year, allowing only three hits and a run. (Photo by Christian J. Stewart)

Immediately in the home half of the inning, after being held to just one base hit in the first three innings, Jason Willow smacked his second single of the game to give Victoria a rally of their own.

With Griffin Paxton in the batter’s box, Willow displayed some magic on the base paths to get into scoring position. The outfielder from UC Santa Barbara advanced to second on a wild pitch, and later stole third to reach third base.

With the high-flying Willow 90 feet from home, Paxton launched a double into the right field corner to score his teammate and open the scoring. Victoria then doubled their lead one inning later in the fifth, as Harrison Spohn scored on another Kelowna wild pitch. 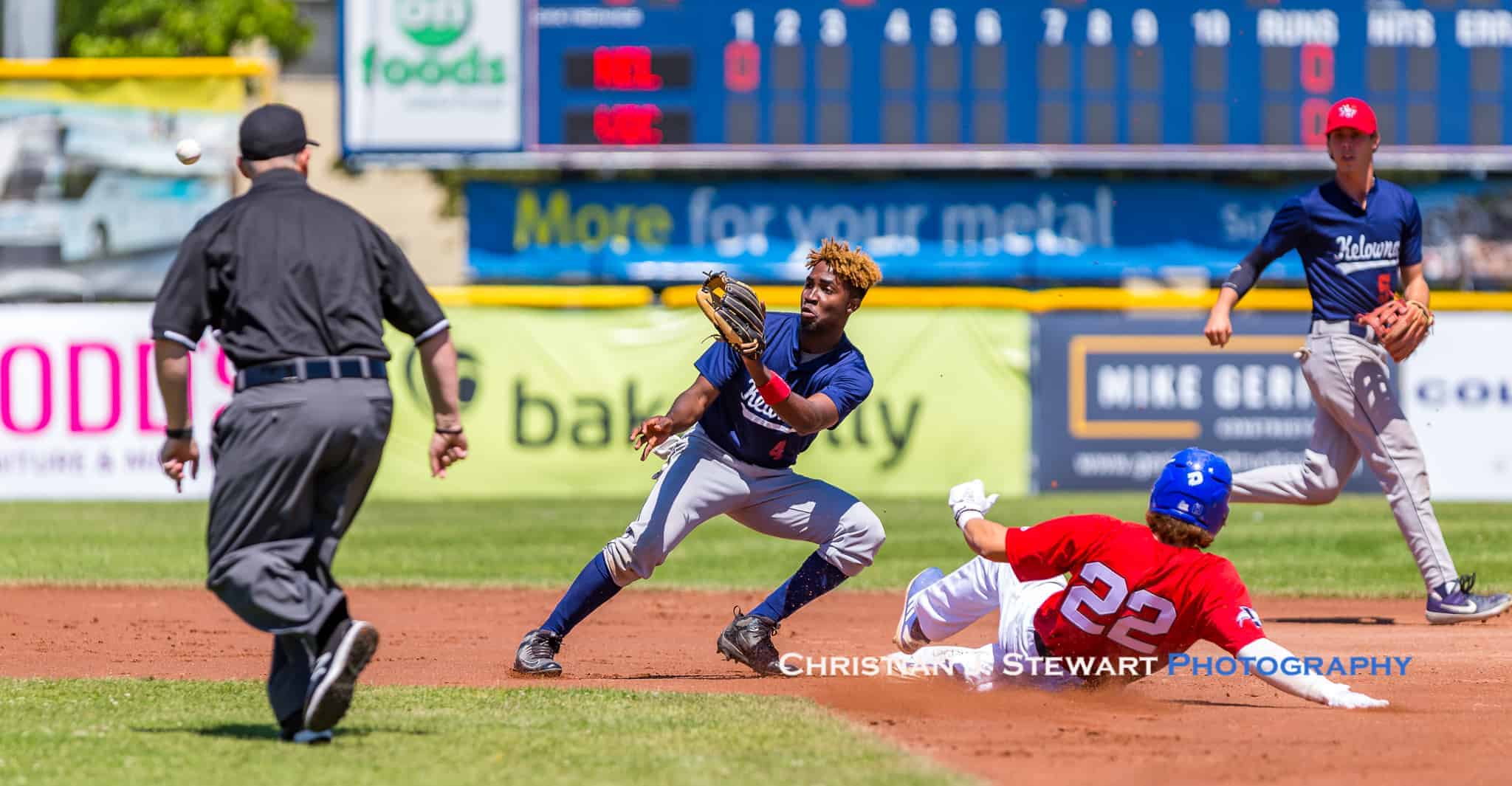 Jason Willow tries to steal second in the first inning, but was called out on a close play at the base. (Photo by Christian J. Stewart)

But the Falcons proved to be a pesky bunch in the later innings, as the two teams traded runs in the game’s final four frames.

Brandon Hupe cut Victoria’s lead in half with a solo shot over the left field wall in the seventh—his second long ball in as many games. One inning later, Austen Butler started the eighth with a double, and Cole Cummings levelled the game at two with a RBI single.

However, in the home half of the eighth, Nate Pecota’s RBI double off the wall momentarily gave Victoria the lead again. Matt Amrhein, who recored the final two outs in the eighth, came back for the ninth but would yield a game-tying home run to Jake Fischer.

Moving into extra innings, Kelowna gained their first lead of the afternoon with a run in the top half of the 10th, but after Paxton and Nick Plaia drew walks to put two men on with two outs in the home half of the inning, Chase Wehsener was summoned to pinch hit. The Baylor product then launched a double to right field that scored two, and ensured Victoria would get their second straight series sweep at home.

Following an exhibition game in Duncan tomorrow, the HarbourCats will host Seattle City in a non-league game Wednesday night at Wilson’s Group Stadium.