The Victoria HarbourCats dream 2019 season will continue, as the ‘Cats defeated the Corvallis Knights at Goss Stadium in Central Oregon to set up a deciding game three for the WCL Championship. Harrison Spohn (right) had a first inning solo homer that initially put Victoria on the board, while Kyle Sherick (left) had a two-RBI single in the third that put the ‘Cats ahead for good. (Photo by Christian J. Stewart)

CORVALLIS, Ore. — The Victoria HarbourCats staved off elimination for the third time this postseason, knocking off the Corvallis Knights 5-2 in game two of the WCL Finals to force a winner-take-all game three tomorrow evening.

The HarbourCats went down 1-0 in the series after dropping the opening game last night at Wilson’s Group Stadium, but moved to 3-0 in elimination games with the road victory at Goss Stadium in Central Oregon. 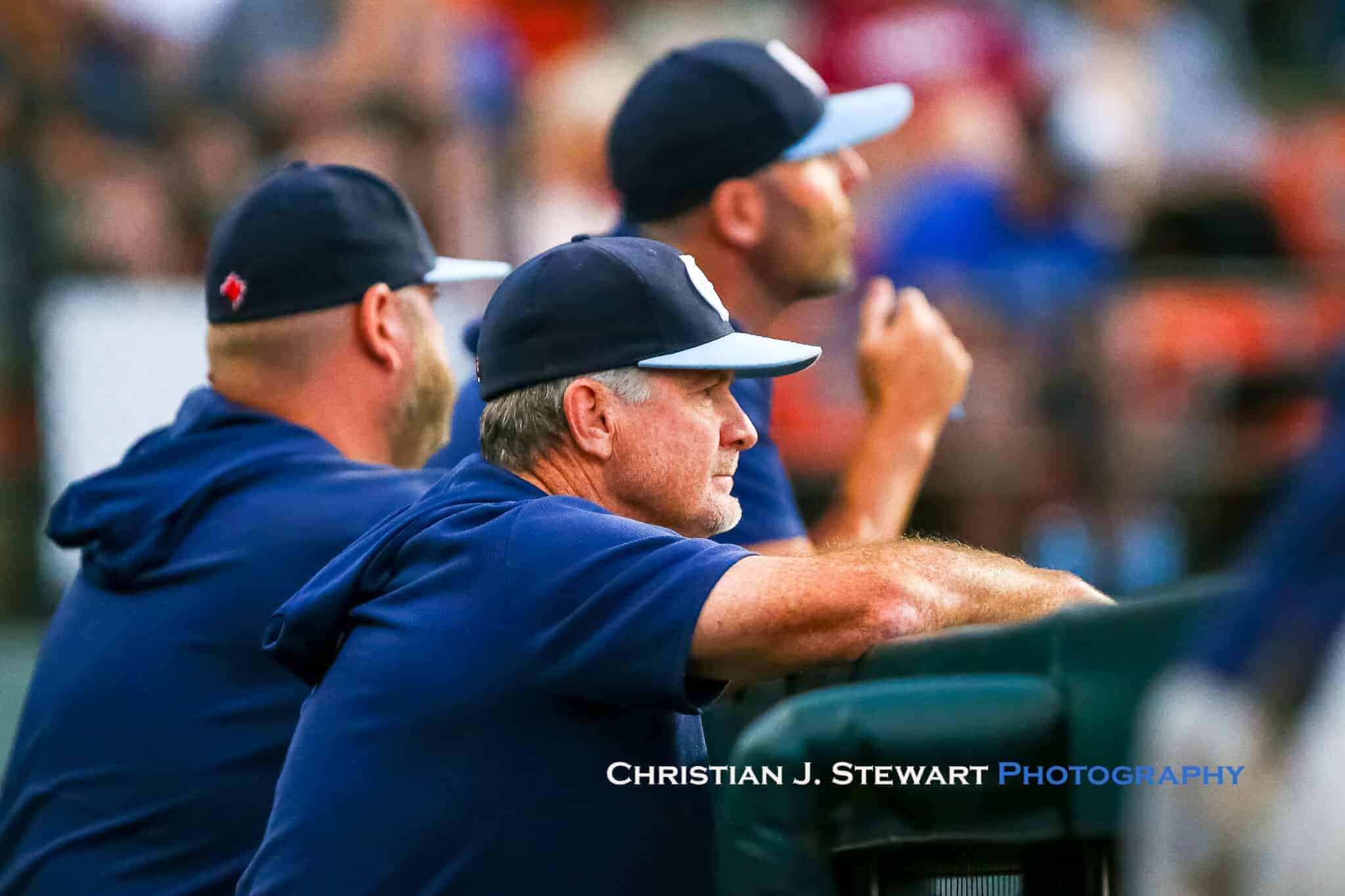 Head Coach Todd Haney looks on from the dugout of Goss Stadium in Corvallis, OR. (Photo by Christian J. Stewart)

Following a game one loss to the Wenatchee Apple Sox in the North Division Championship Series, the ‘Cats clawed back to defeat the Wenatchee AppleSox in back to back games to clinch the best-of-three series and set up the Final series with Corvallis. It’s the second time in three seasons the HarbourCats and Knights have battled in the championship round, as Corvallis defeated Victoria two games to one in the 2017 series. 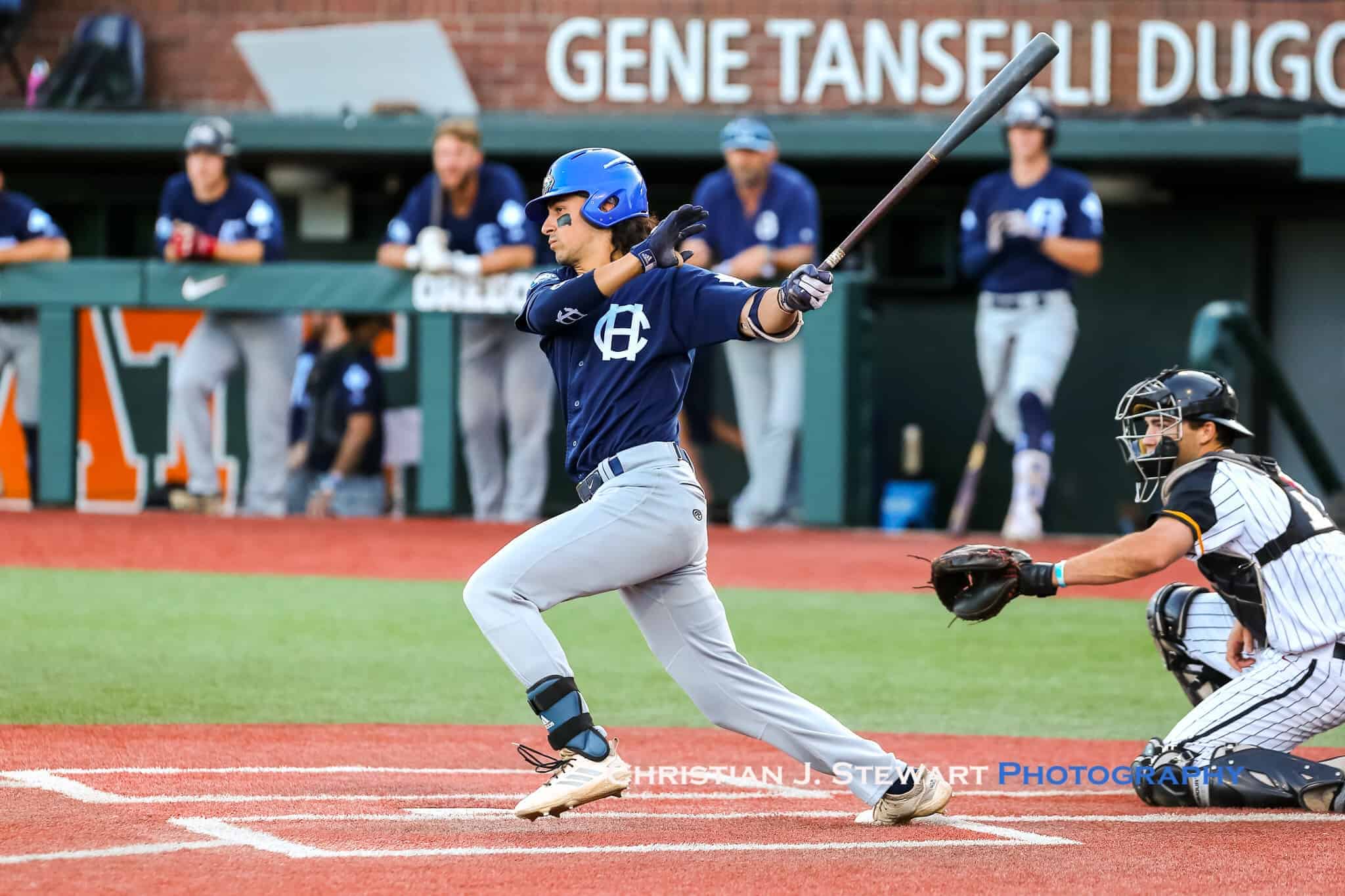 Nick Plaia had a hit and scored a run in tonight’s game two against Corvallis. (Photo by Christian J. Stewart)

Victoria started the action early in the first, taking their first lead of the championship series courtesy of Harrison Spohn.

Corvallis starter Eric Hill retired the first two HarbourCats to begin the game, however, with two outs Spohn launched a 3-2 pitch over the left field fence to draw first blood for Victoria—the homer was Spohn’s third of the playoffs, and second in as many days. 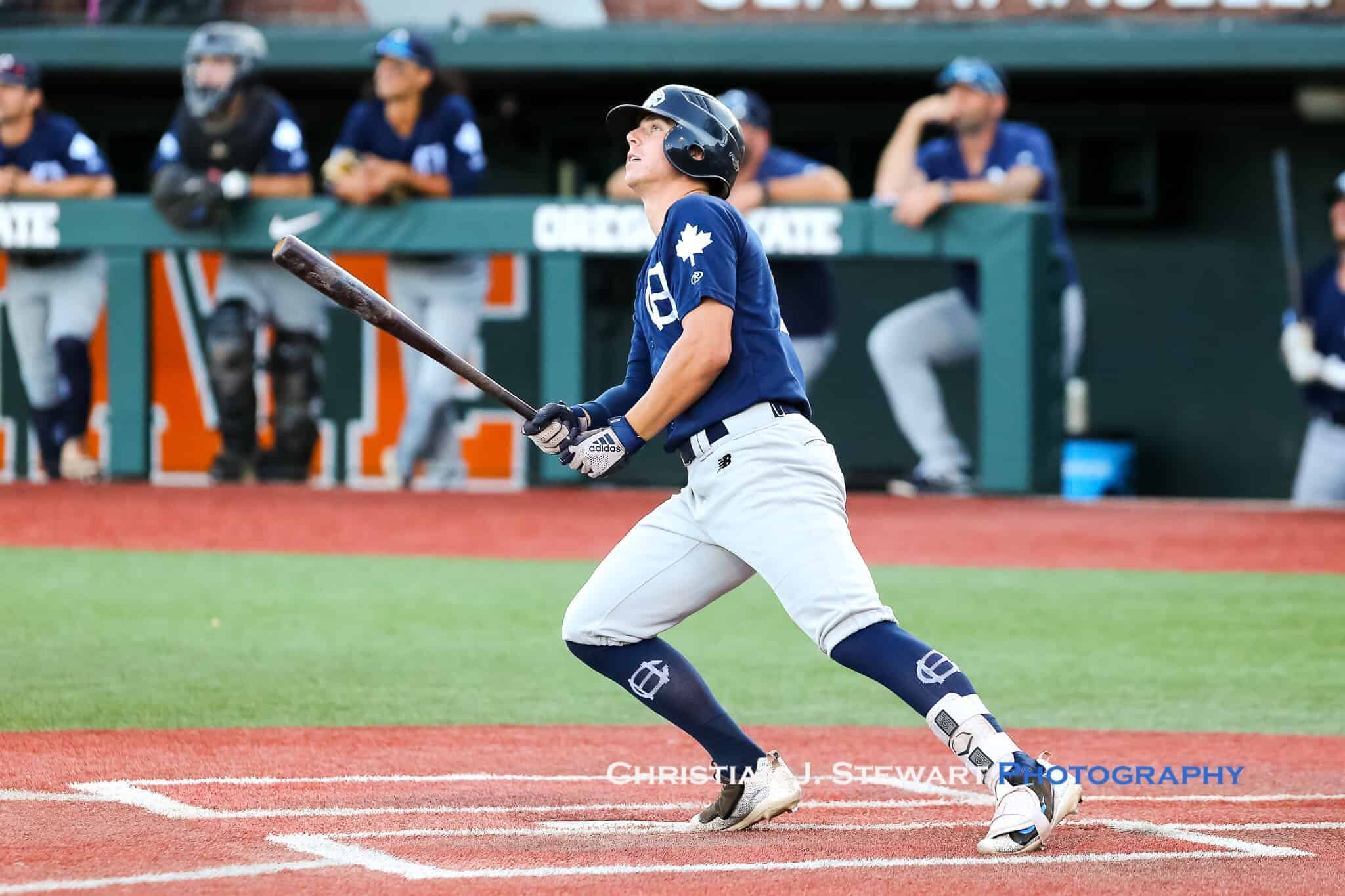 In the home half, though, the reigning three-time WCL league champion Knights would respond.

Jake Holcroft began the frame by drawing a walk, and advanced to third one out later, while Victoria starter Reagan MacDonald would put two men on the corners after hitting Briley Knight with a pitch. Then with Brooks Lee at the plate, MacDonald was called for a balk that allowed Holcroft to score from third and level the game at one. 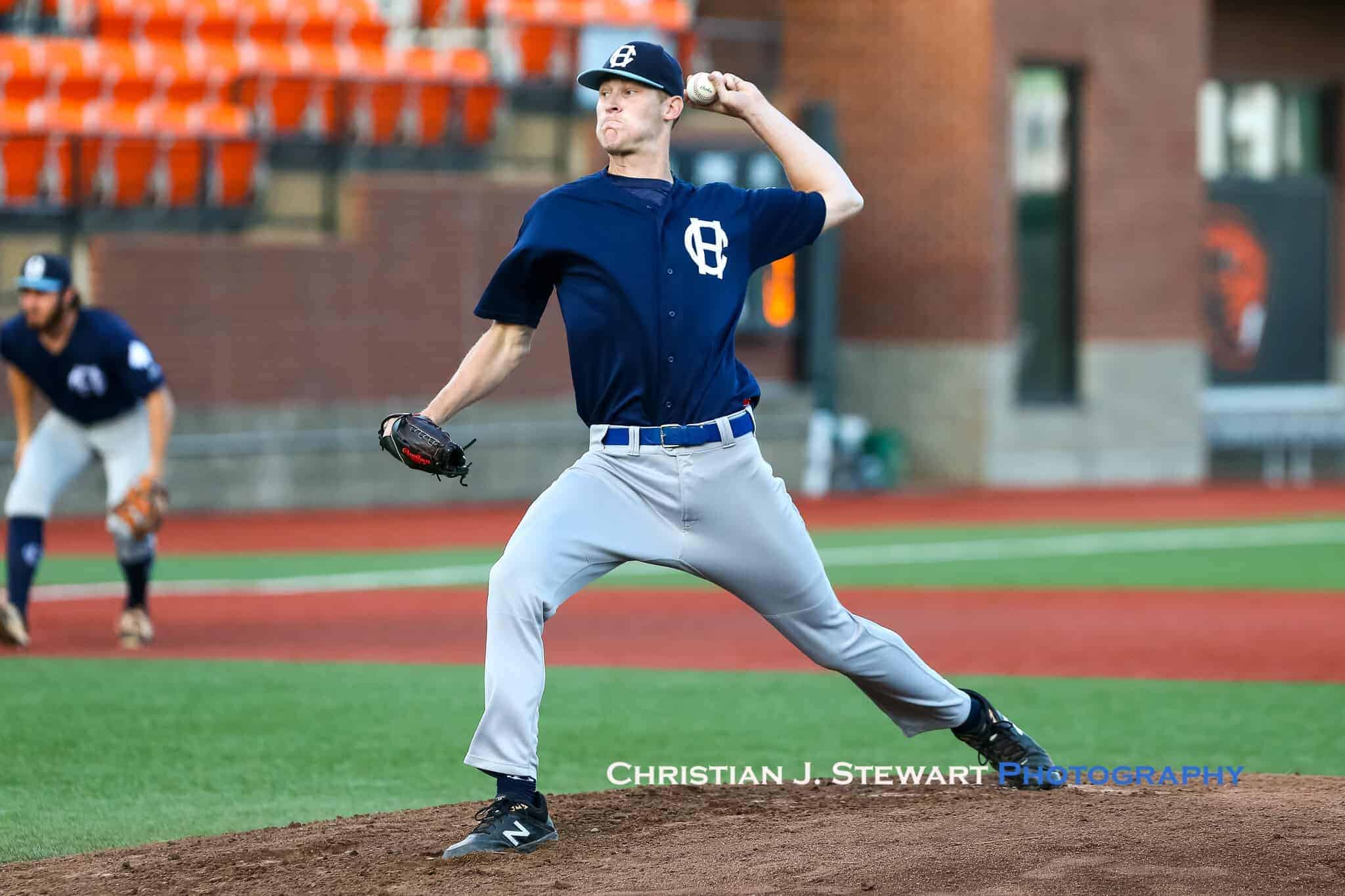 Reagan MacDonald got the start tonight, and yielded just two hits and two runs over 3 1/3—collecting five strikeouts in the process. (Photo by Christian J. Stewart)

One batter later, Zack Moeller collected his second RBI of the Finals with a single that made it a 2-1 game for the Knights. 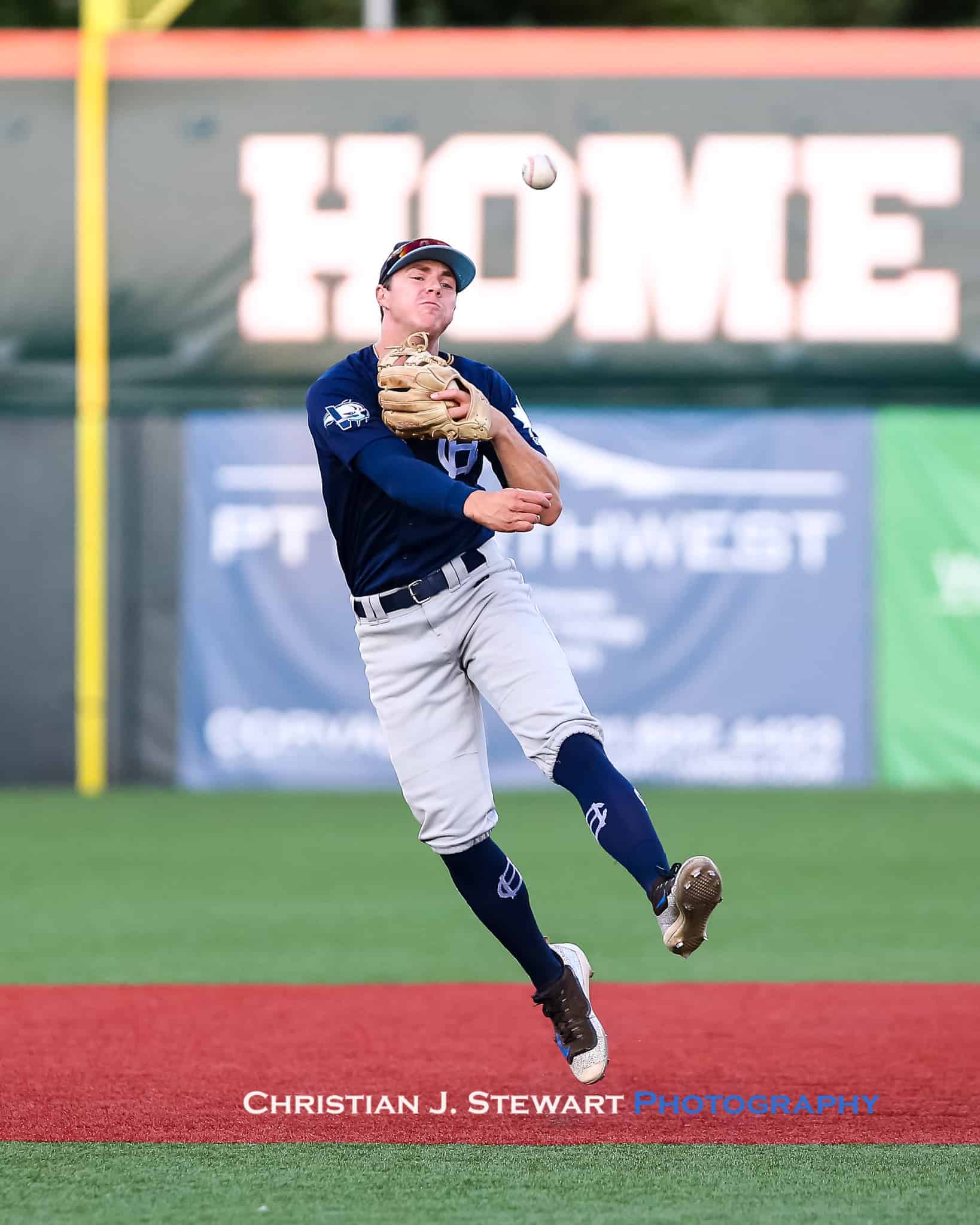 Harrison Spohn showed off his silky smooth defence at shortstop tonight, instead of the third base he’s played the most of the playoffs in 2019. (Photo by Christian J. Stewart)

MacDonald would limit the damage by striking out the next two Corvallis batters to keep Victoria within striking distance, and two innings later the HarbourCats potent offence broke through again. 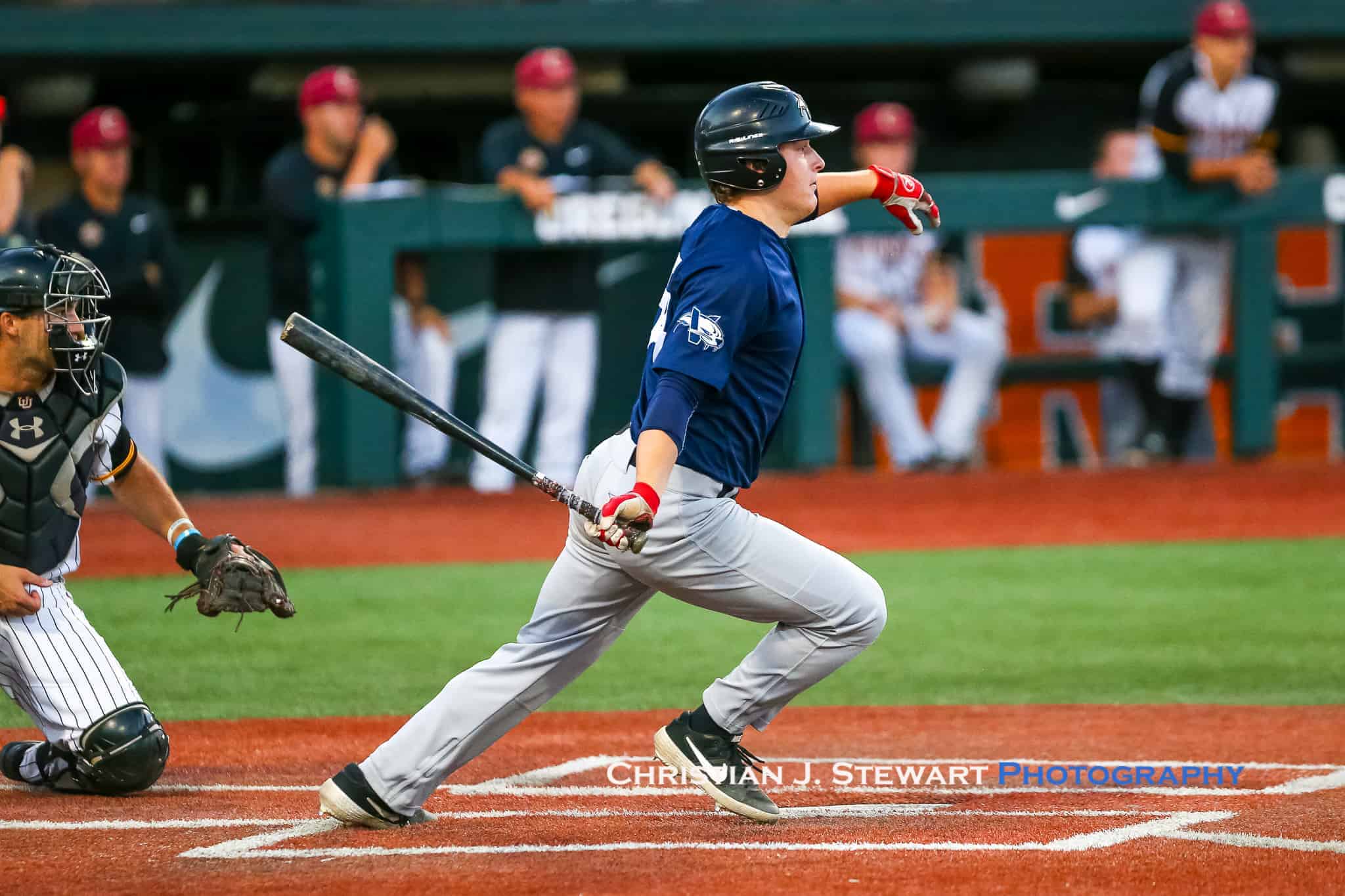 Andrew MacCuaig and Nick Plaia hit a pair of singles to put runners on the corners, and after Plaia reached second on a wild pitch, Hill threw his second wild pitch of the inning to score MacCuaig. Two batters later, after a Ty Schindel walk, Kyle Sherick hit a RBI single to score Plaia and Schindel to bring Victoria ahead by two runs. 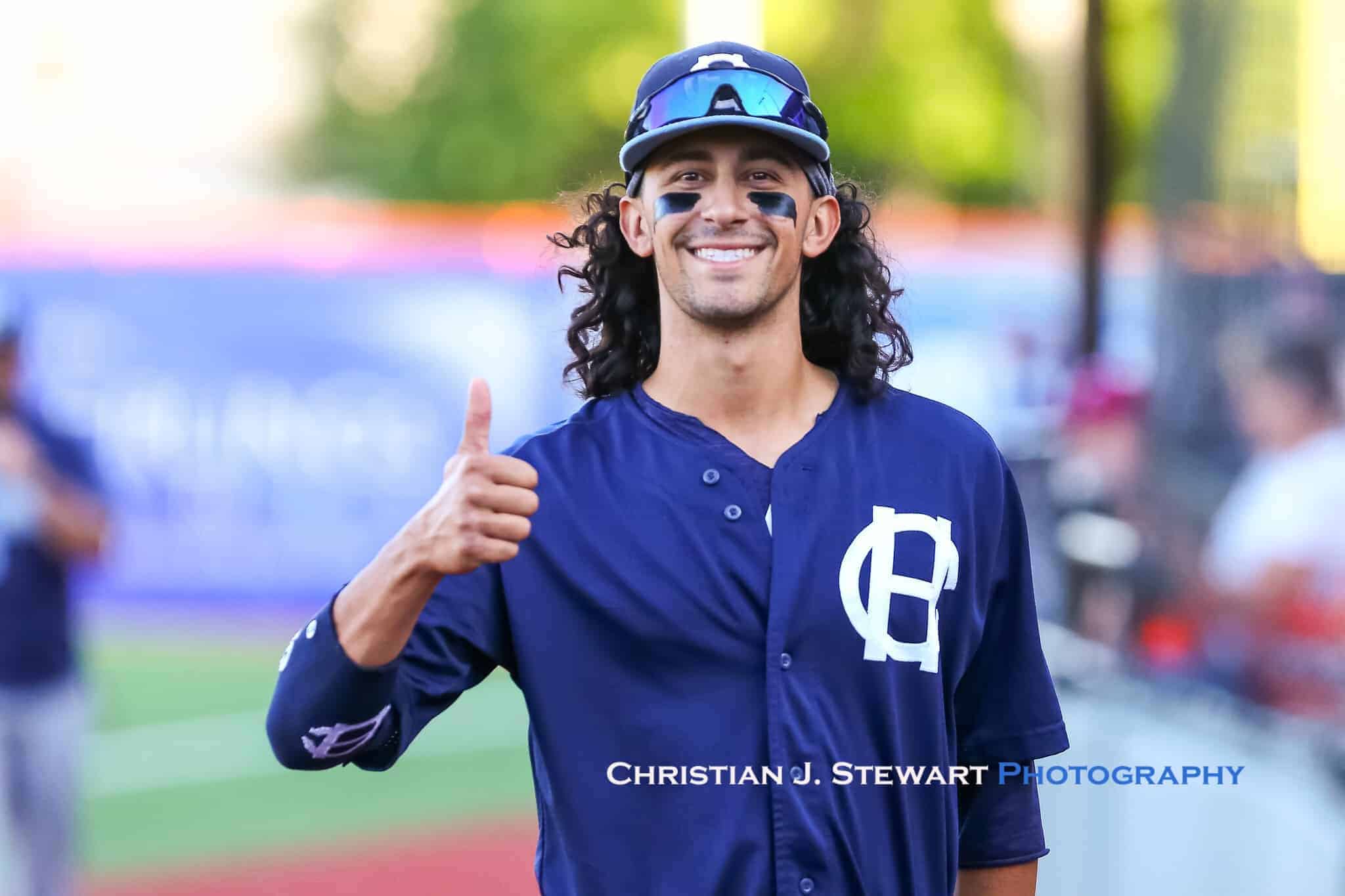 Nick Plaia gives his trademark smile and thumbs up before the game. (Photo by Christian J. Stewart)

MacDonald exited in the fourth, and ended up racking up five strikeouts in 3 1/3, before Hunter Omlid came in and shut Corvallis down in relief.

While Victoria added a run of insurance in the sixth to make it a three run ‘Cat lead, Omlid would finish the game—pitching 5 2/3 innings of three-hit ball.

Omlid would retired 13 consecutive Knights batters, before finally yielding back to back singles with two outs in the eighth. But the righty from Boise State would sit down Matthew Gretler with a strikeout to send the game to to the ninth, where Omlid came back out to the mound and notched the final three outs to seal the game two victory for Victoria.

Omlid has now pitched 8 2/3 innings of scoreless baseball in the postseason, racking up nine strikeouts and allowing just five hits in that span. 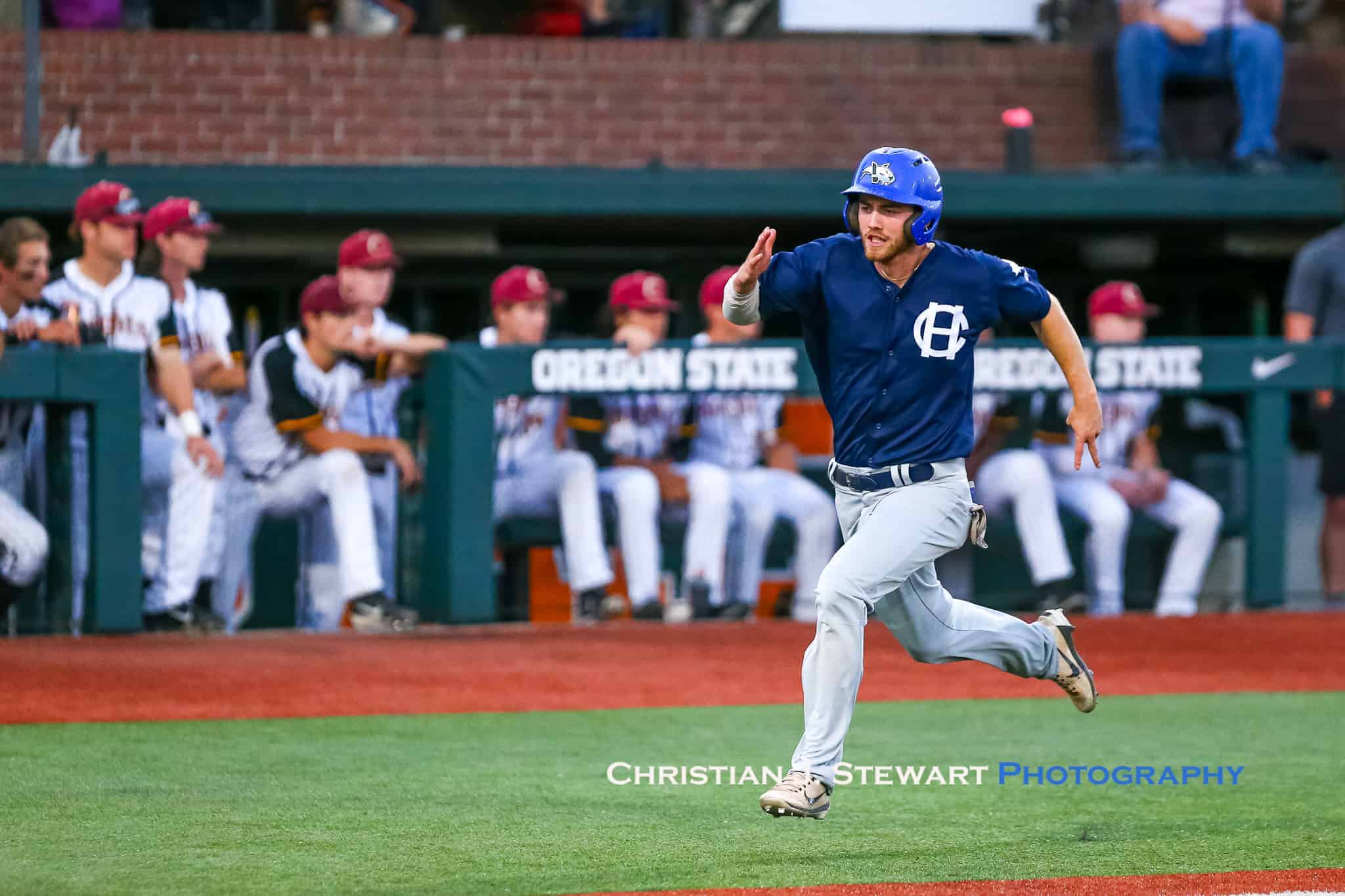 Ty Schindel hustles in from third to score a crucial run in the ‘Cats victory, the Victoria native scored on the second wild pitch of the inning from the Knights starter. (Photo by Christian J. Stewart)

With the win, the HarbourCats will look to earn their first title in franchise history in a deciding game three tomorrow evening. First pitch is scheduled for 5:05p.m. at Goss Stadium.

You can watch the game live here, or follow along to Mike Edwards giving the play by play on the HarbourCats Facebook page.