Parker Bramlett dives into second base for his record-breaking 20th stolen base of the season. The infielder from Angelo State broke Nick Plaia’s record of 19 set last summer in Victoria’s 12-3 victory over the Cowlitz Black Bears. (Photo by Christian J. Stewart)

Cowlitz, who won four of their past six games coming into this series to climb within two and a half games of first place in the WCL Second Half South division standings, made their first journey to Vancouver Island since 2017. 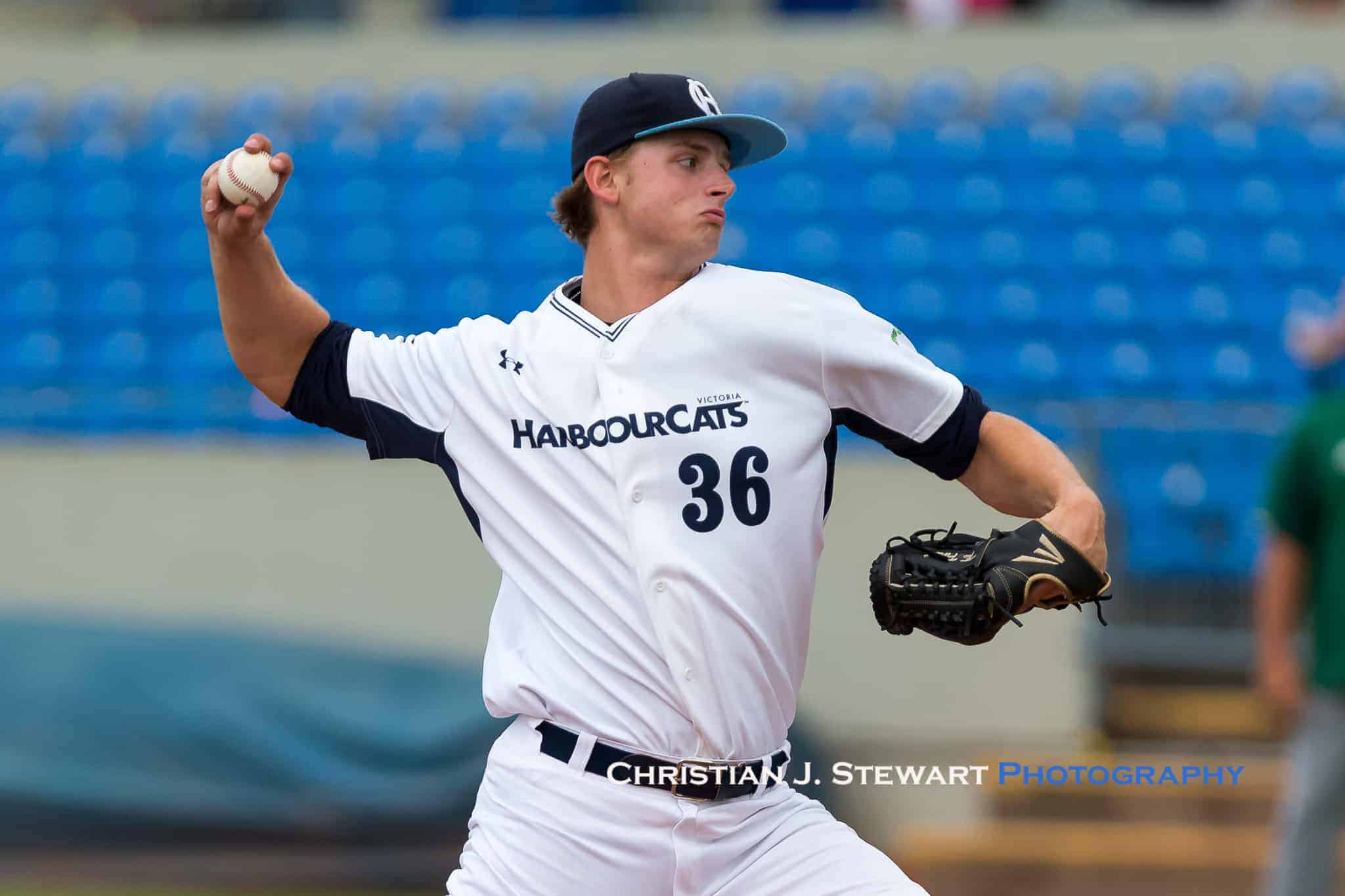 Calvin Turchin racked up a season high seven K’s through five innings on the night, falling just one inning short of his third quality start of the year. (Photo by Christian J. Stewart)

Although Victoria swept Cowlitz in that three-game set two summers ago, each game was decided by only a single run, and the Black Bears looked to gain some vengeance against the HarbourCats right off the bat tonight. 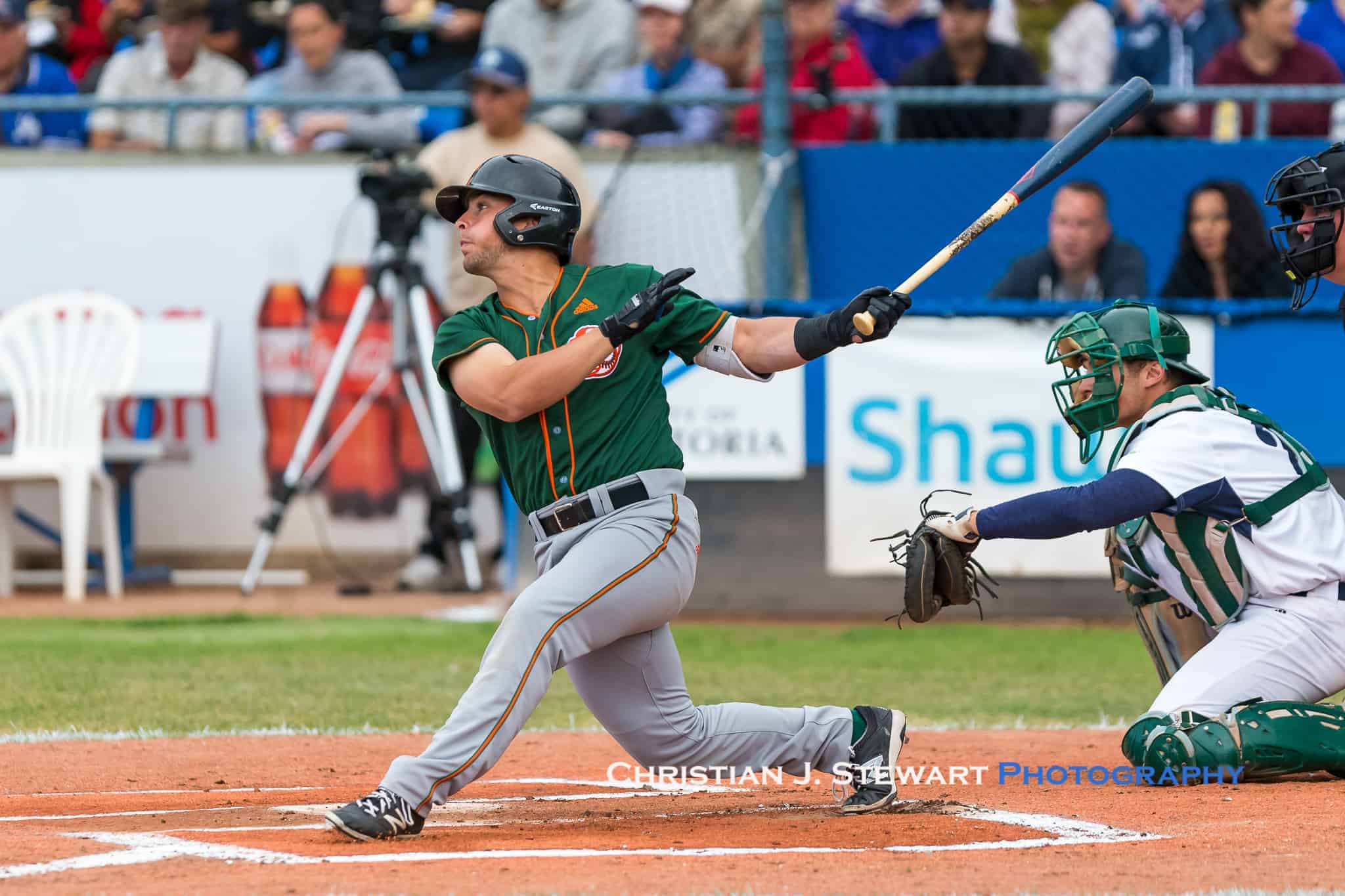 This homer by Andres Sosa in the first would prove to be the only blemish in Turchin’s outing. (Photo by Christian J. Stewart)

Emilio Nogales drew a one out walk, and one batter later Nick Plaia smacked Victoria’s first hit of the game over the fence in left field to jump the ‘Cats ahead. The home run was Nick Plaia’s fifth on the season, which brought him into a tie with Jason Willow for the team lead. 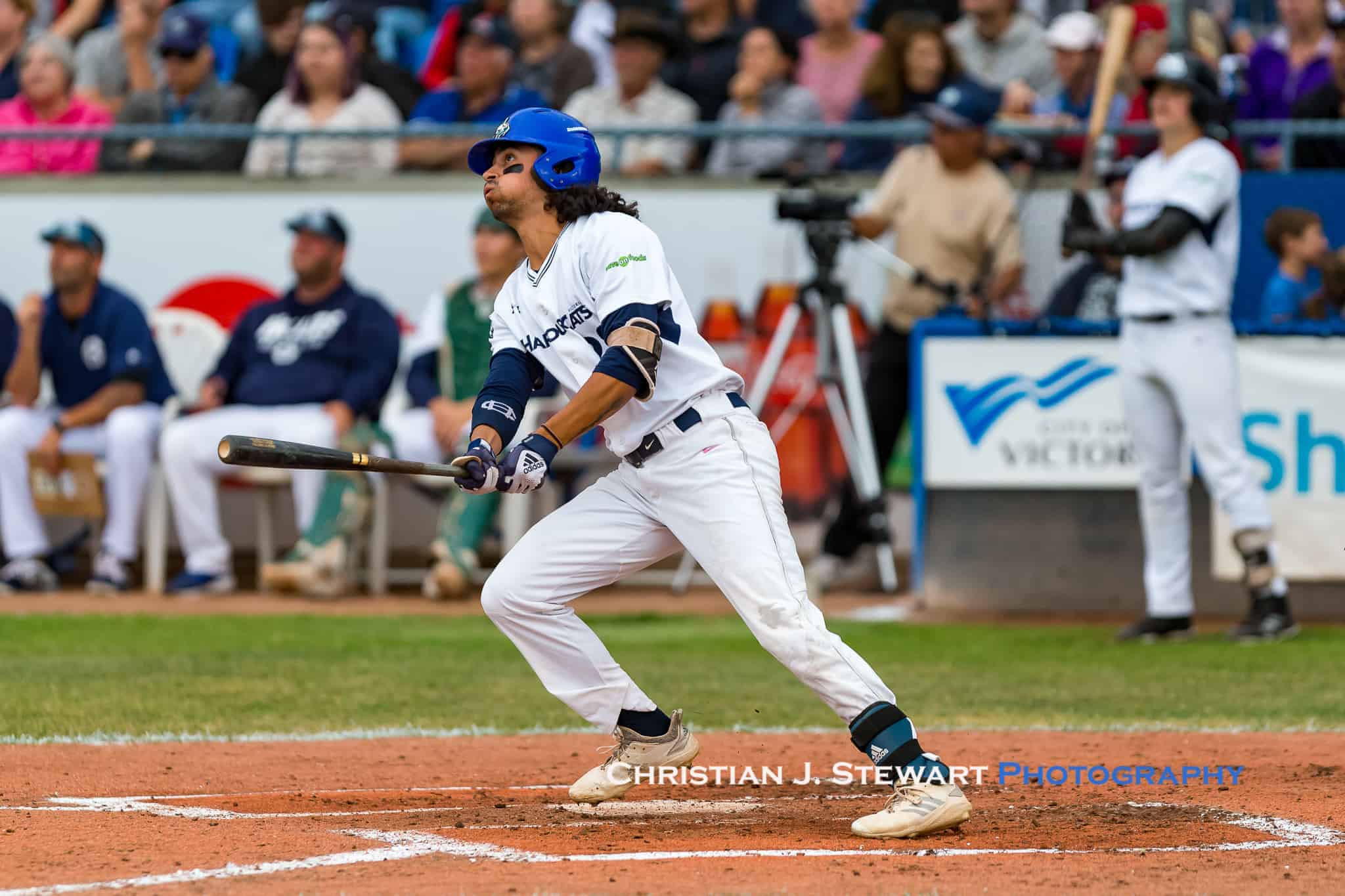 Nick Plaia watches his homer fly over the left field fence. The outfielder finished the night with two hits and four RBI in the game. (Photo by Christian J. Stewart)

After Turchin held Cowlitz off the board with the help of back to back strikeouts in the third, some HarbourCat history was made in the home half. 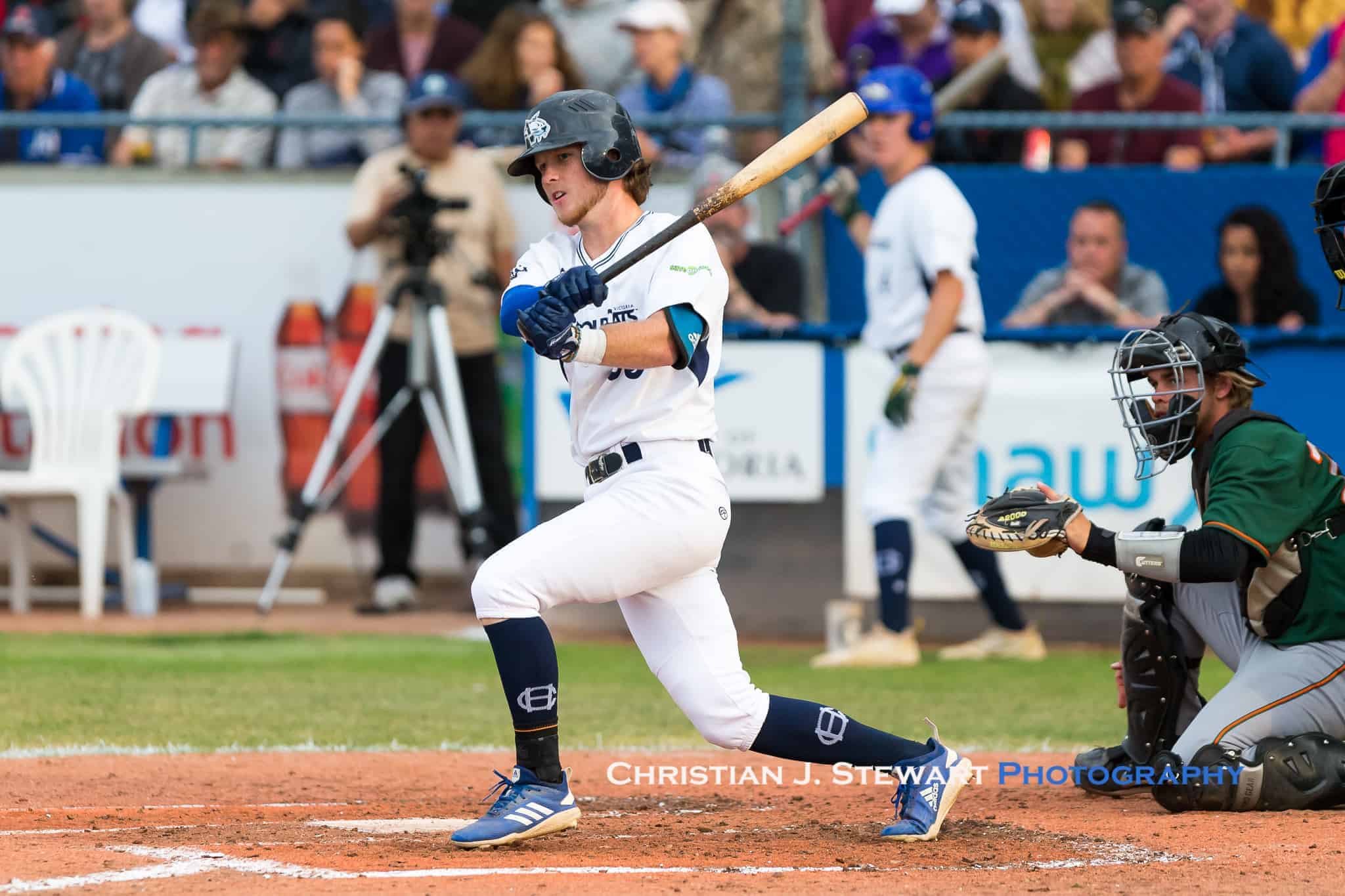 Parker Bramlett also finished with a hit and two walks on his record-breaking evening. (Photo by Christian J. Stewart)

Parker Bramlett reached base with a one out walk, and stole second base one batter later for his 20th steal of the year—breaking Nick Plaia’s single season franchise stolen base record of 19 set last summer. Bramlett advanced to third one pitcher later off a wild pitch, however, Frankie Niemann would strand the Angelo State product at third by striking out.

Coming back to the mound in the fourth, Turchin yielded a leadoff double to Josh Marchese but got back to back fly outs to put two outs on the board and ended the threat with another strikeout. The righty out of the University of Hawaii finished the night with a season high seven strikeouts, the most since he recorded a whopping six K’s in three innings of work on June 16 in Kelowna. 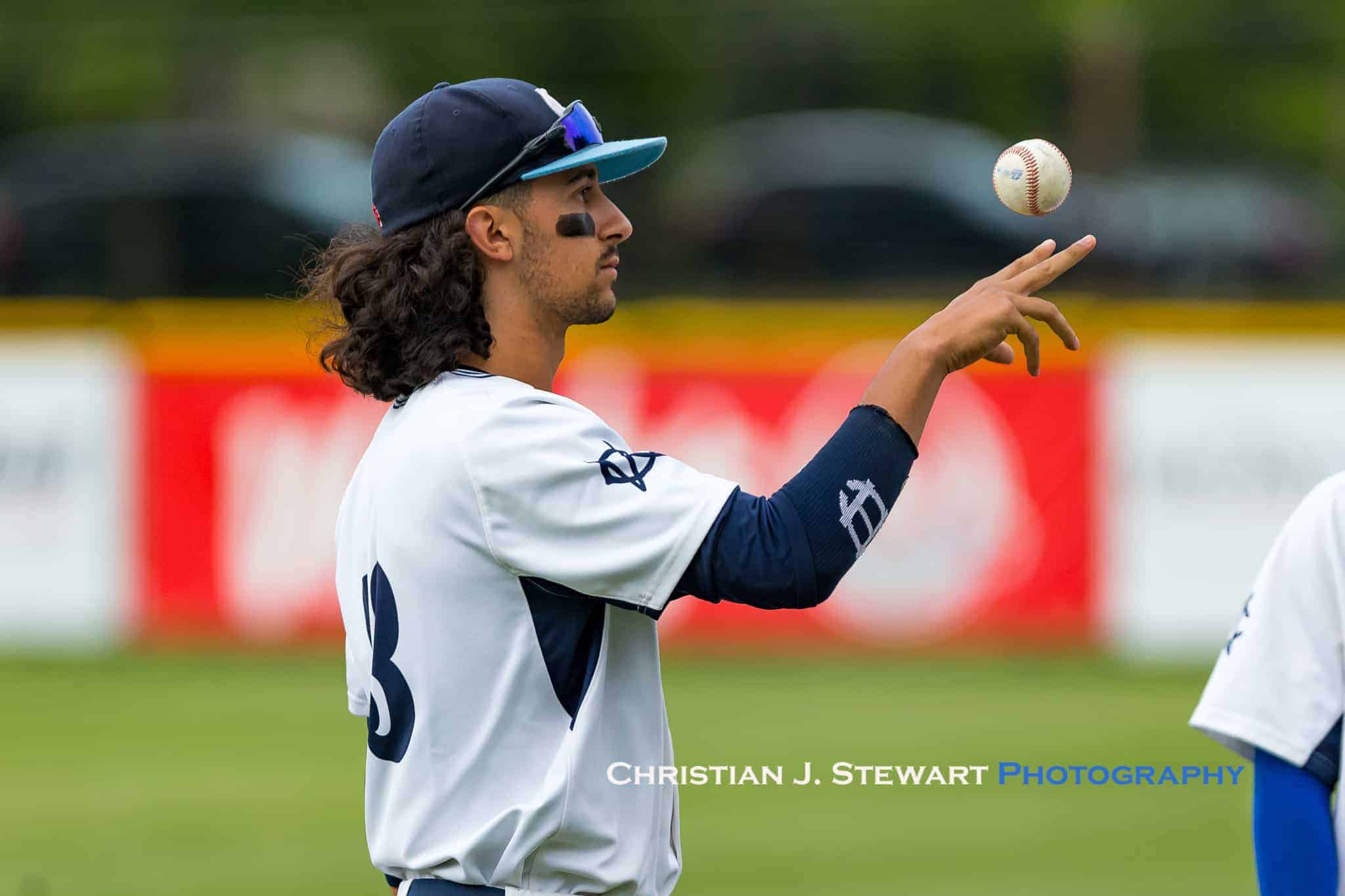 Maybe it was this laser focus in the pre game warmups that helped Nick Plaia have a huge night at the dish. (Photo by Christian J. Stewart)

The HarbourCats started to break away in the fourth, when Plaia started a two out rally. The Cal Baptist centre fielder drew a walk, and would steal both second and third with Nate Pecota at the dish to increase his career stolen base tally to 29—five behind Alex De Goti’s franchise record of 34.

Pecota would then score Plaia with a RBI double, and the ‘Cats poured on the offence in the fifth.

Victoria would bring nine batters to the plate in the frame, as Chase Meidroth made it a 4-1 game with a RBI single. Frankie Niemann busted the game open with a double to right field that scored Bramlett and Meidroth to give Victoria a five run advantage. 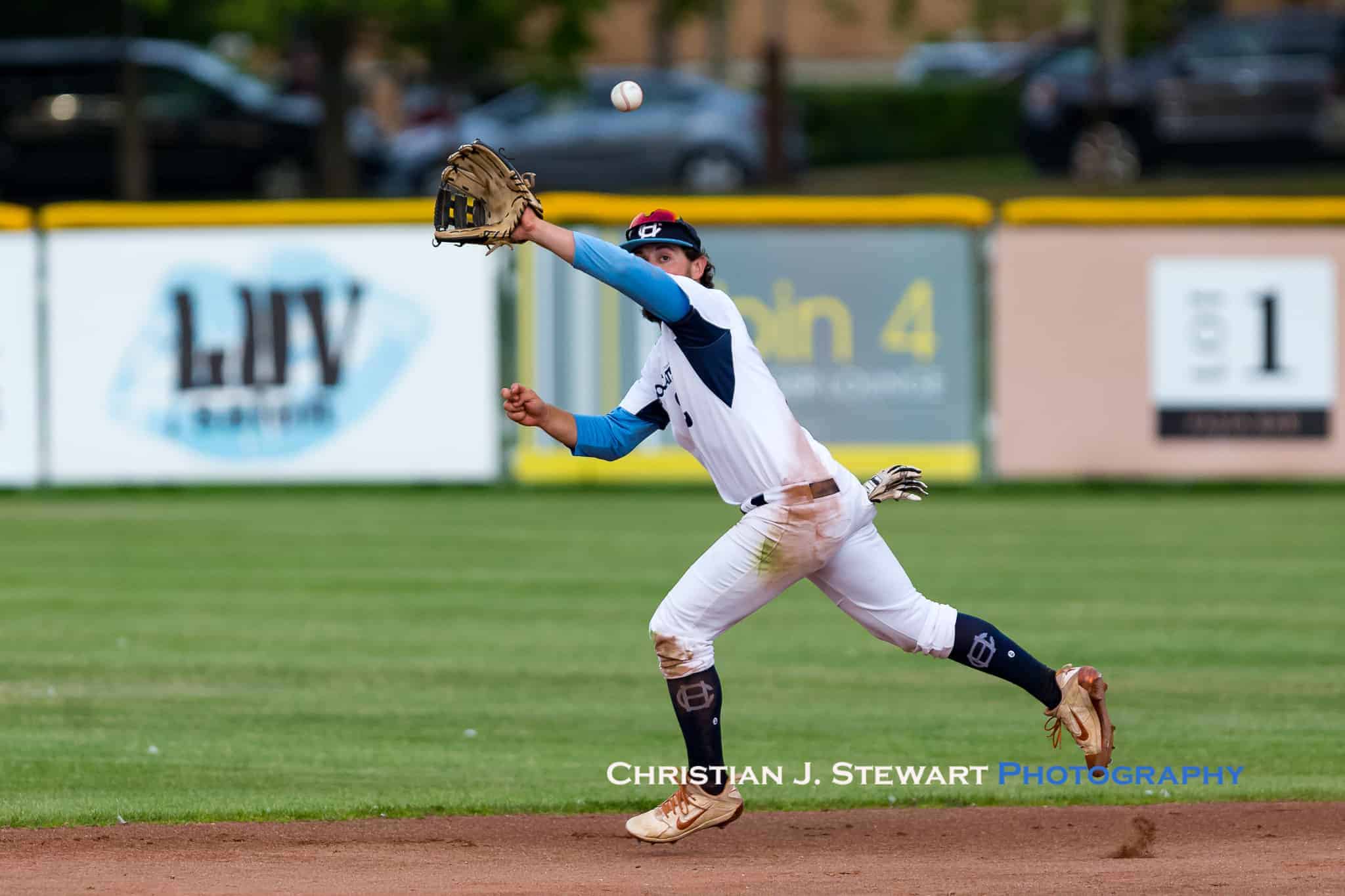 Tanner Haney leaves his feet for a ball at second base earlier in the game. (Photo by Christian J. Stewart)

Plaia and Pecota capped the five-run inning off with back to back RBI sac-flies to give Victoria two more insurance runs.

Manager Todd Haney decided to pull his starter after the fifth, opting for Derek Salata out of the bullpen. Turchin finished the night by allowing just the first inning home run, giving up just one walk and five hits, and falling one inning short of his third quality start of the summer.

Three separate HarbourCat relievers held Cowlitz to just two runs following Turchin’s exit, as the ‘Cats tied the Wenatchee AppleSox for first in the Second Half North standings with the victory. Victoria will look to clinch the series tomorrow night, first pitch is scheduled for 6:35p.m.