Parker Bramlett’s error in the first cost Victoria three runs, but the shortstop made up for it with a bases clearing double in the sixth that ignited a comeback victory for Victoria. (Photo by Christian J. Stewart)

VICTORIA — Following a costly error in the first inning, Parker Bramlett redeemed himself with a bases clearing double that sparked a 10-5 comeback victory for the Victoria HarbourCats (16-7) over the Kelowna Falcons in the middle game of a Canada Day weekend series at Wilson’s Group Stadium at Royal Athletic Park.

The win not only extended the ‘Cats six-game win streak — their longest streak since the summer of 2017 when they won eight consecutive games from June 27 to July 26 —but maintained a one game lead over the Bellingham Bells for first place in the WCL North division. 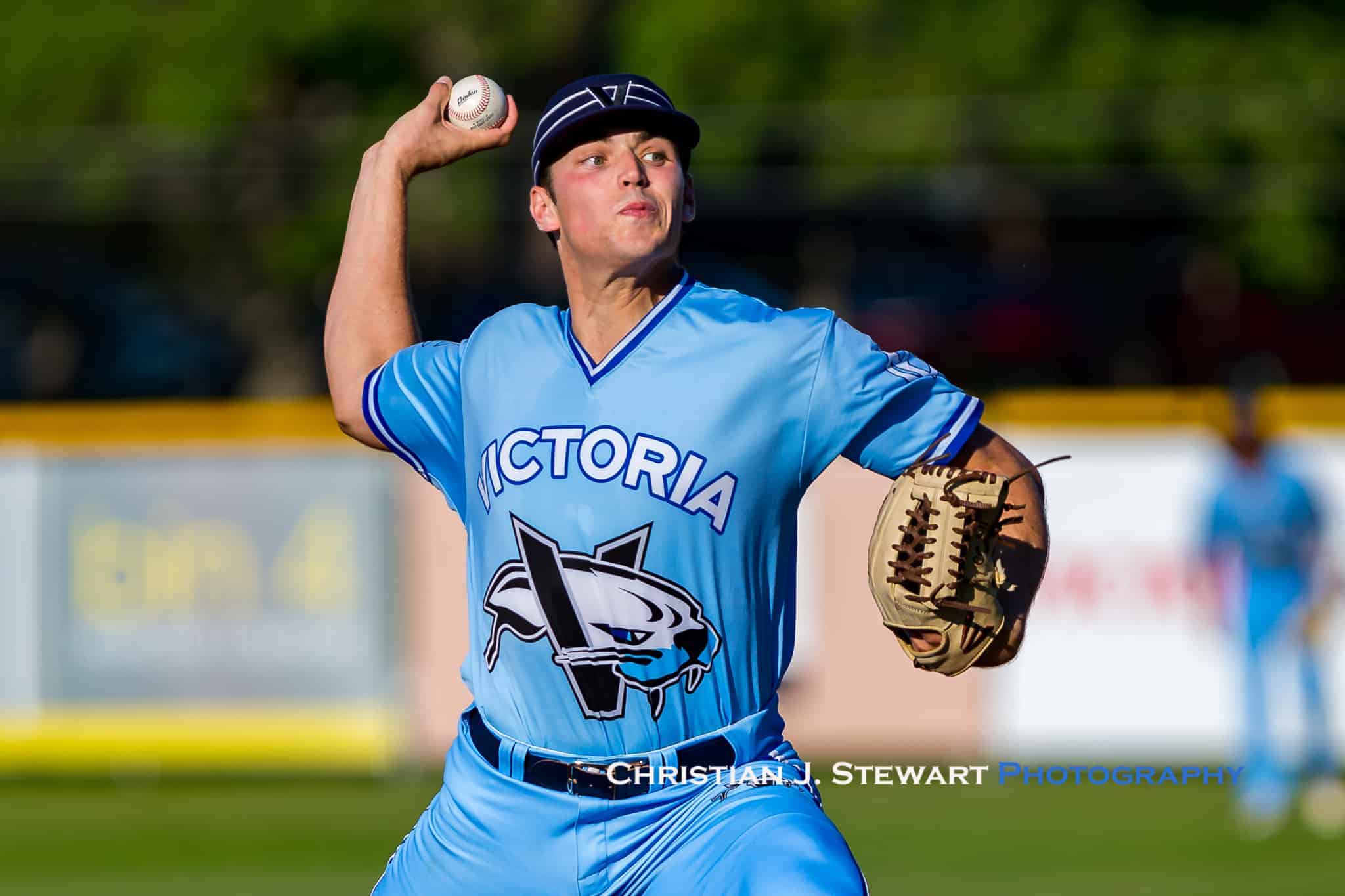 Starter Jack Hyde went 4 1/3 on his start, and collected five strikeouts that kept the HarbourCats within striking distance. (Photo by Christian J. Stewart)

Bellingham (14-7) trailed by a run with two outs in the bottom of the ninth in a game earlier in the day against Portland, but scored two and walked off the Pickles with a two-run homer to momentarily bring themselves within a half game of the division lead.

Roughly 100km across the strait of Georgia, however, the HarbourCats found themselves in a battle with the cellar-dwelling Falcons to restore the one game division lead.

Starting pitcher Cade Smith would collect five strikeouts over 4 1/3 on the night, but had troubles closing out innings. 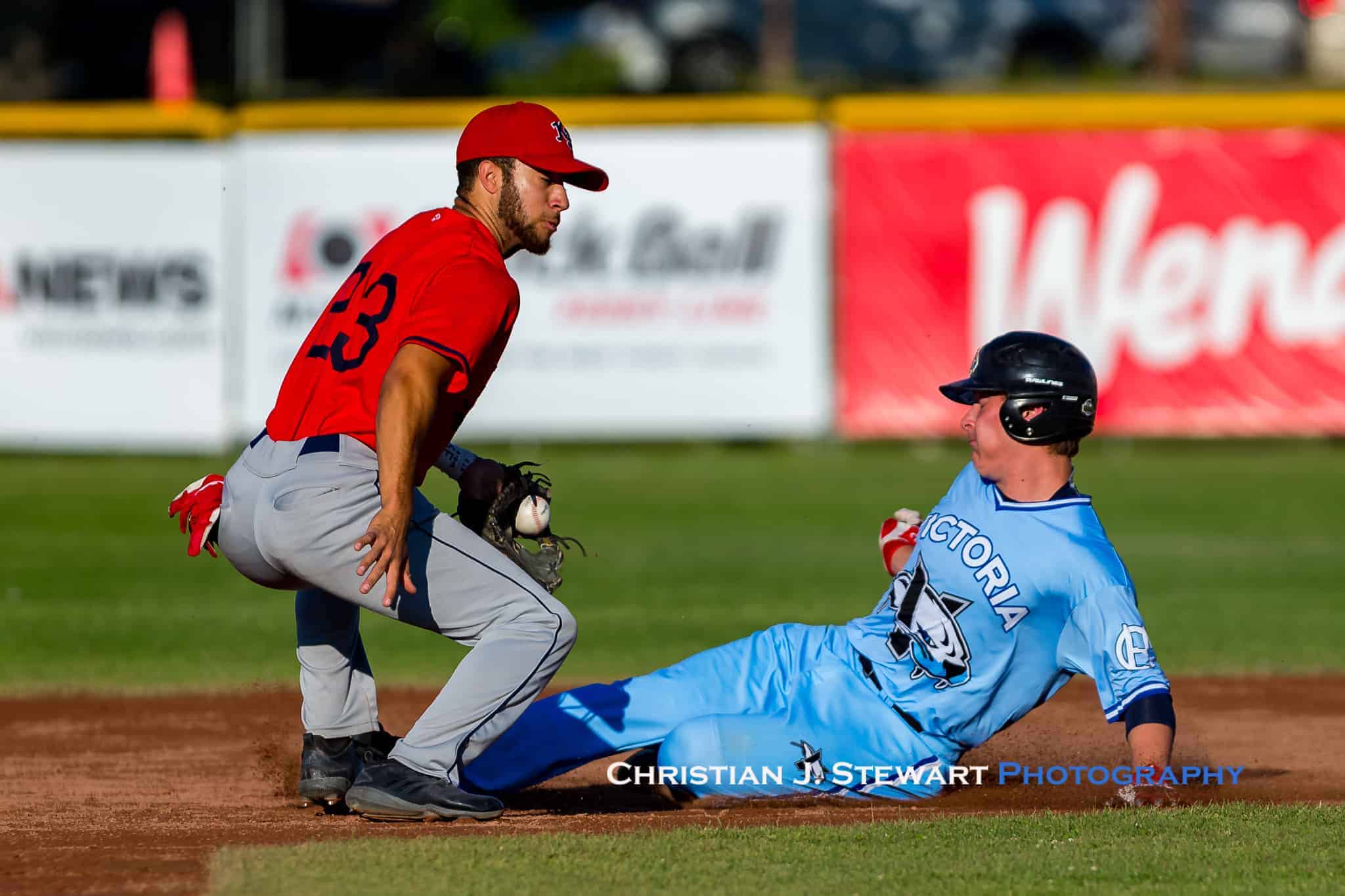 Kelowna’s Tyler Grissom tries to snag a throw and tag out a HarbourCat earlier in the game. (Photo by Christian J. Stewart)

After Smith got two outs in the first three batters to start the first, Conagher Sands reached on a liner that bounced off Parker Bramlett’s glove to put two men on. Following a wild pitch that advanced both runners into scoring position, Cole Cummings notched his fourth and fifth RBI of the season with a triple into the right field corner.

Two innings later, Kyle Sherick recorded his first hit as a HarbourCat with a single, and Victoria loaded the bases for the WCL league leader in batting average, Frankie Niemann. 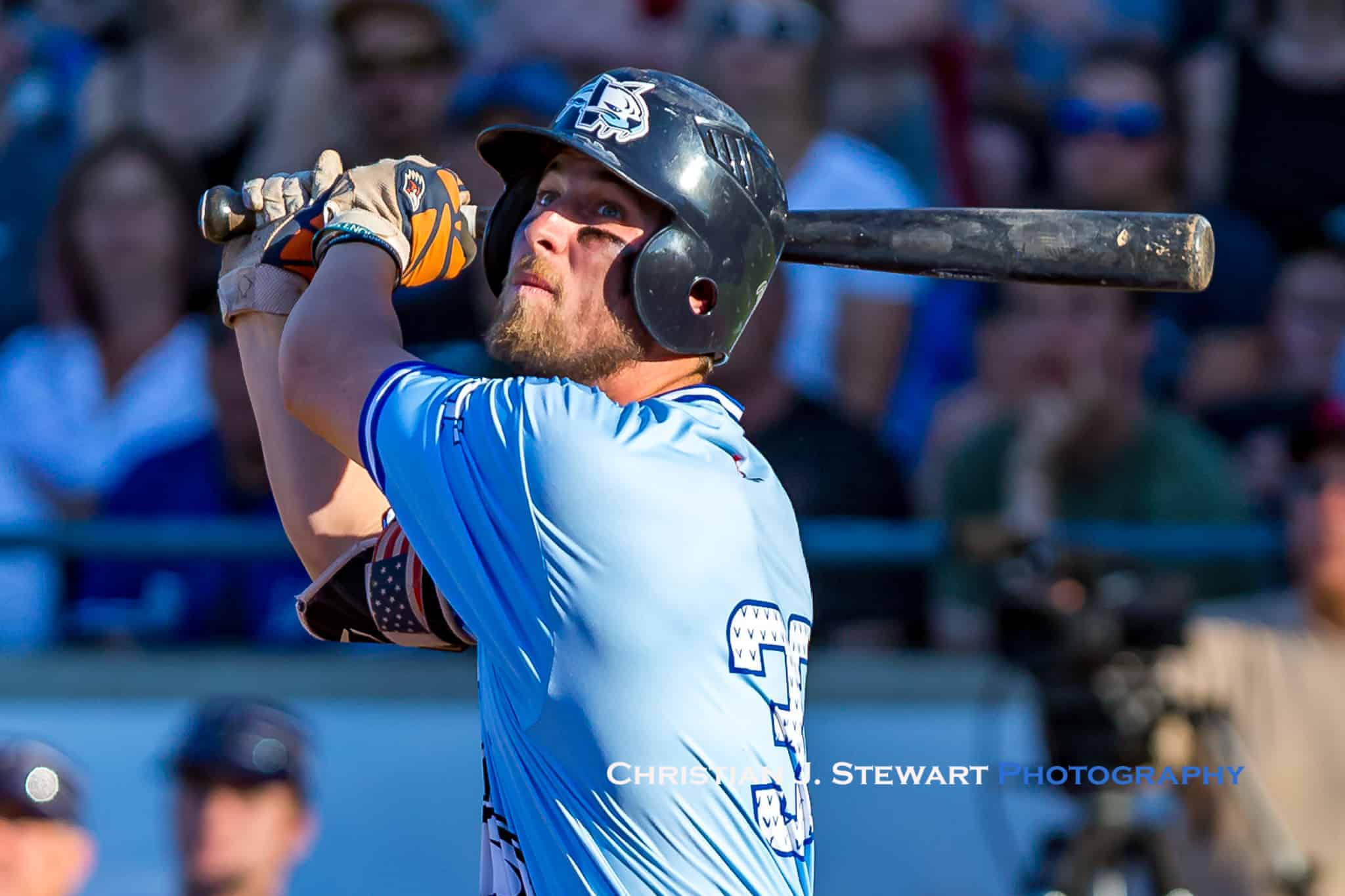 Griffin Paxton tracks his liner, and follows through with his hands before sprinting to first. (Photo by Christian J. Stewart)

Niemann, who entered tonight’s game with a .500 batting average and eleven game hit streak, got Victoria on the board with a sac-fly to make it a 3-1 game. Niemann extended his hit streak to 12 with a hit in the first inning.

The two teams traded runs again in the fourth and fifth, but Victoria jumped ahead for good in a five-run sixth inning. 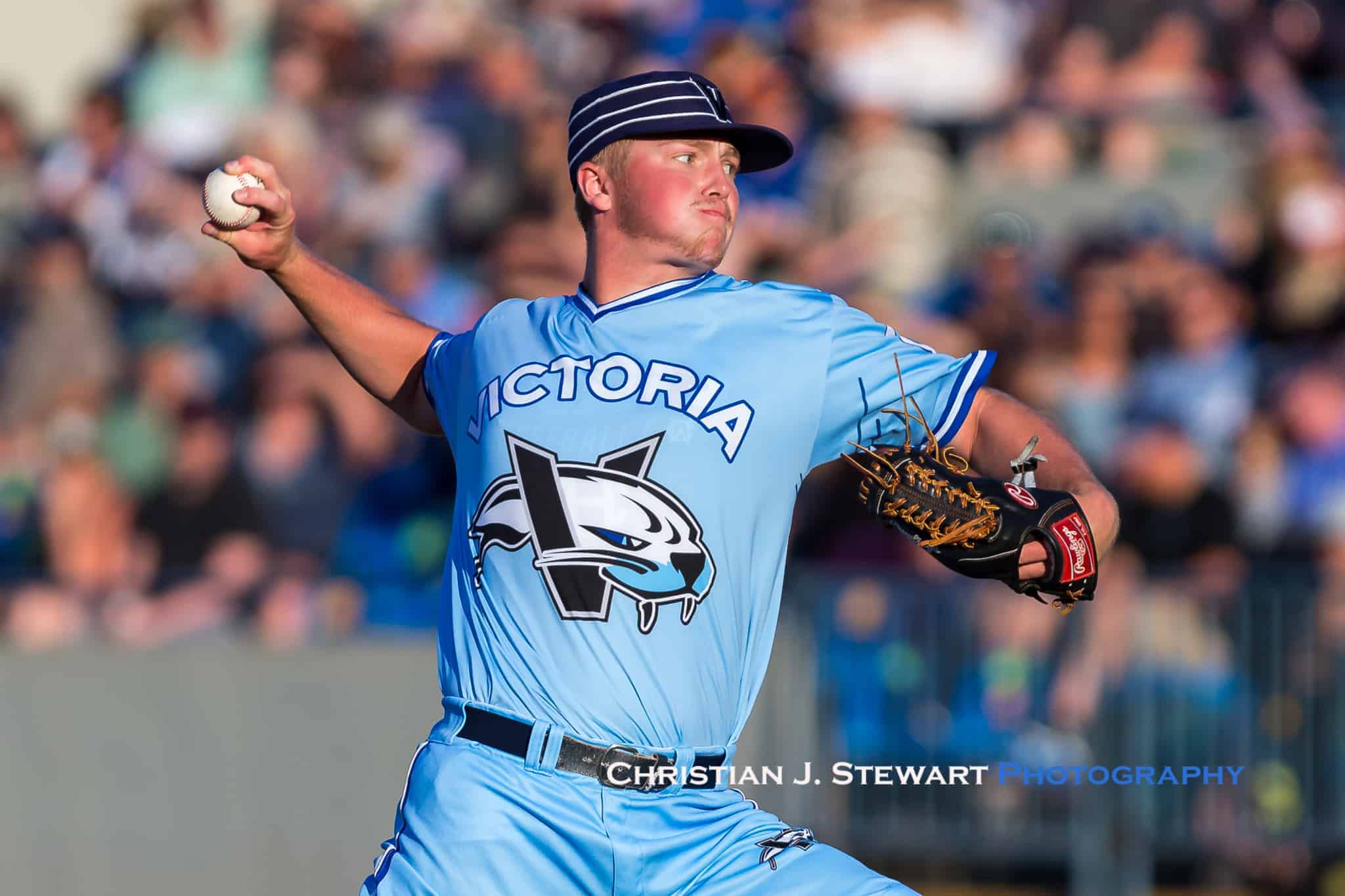 Derek Salata came on in relief for Smith in the fifth, pithing 1 1/3 on the night—collecting a pair of strikeouts in a solid relief performance. (Photo by Christian J. Stewart)

Nick Plaia started the frame with a leadoff single, while Tyler Pettit reached on a walk, and Sherick’s second single of the night loaded the bases.

Bramlett then took centre stage, and smacked a double over Brayden Merritt’s head in right field. One batter later, Jason Willow put an exclamation point on the inning with a two-run homer to propel Victoria ahead by three.

In the seventh, Sherick provided Victoria with some insurance with a sacrifice fly that made it a 8-4 game.

Kelowna climbed within three in the eighth, but the HarbourCats responded with a pair of runs in the home half of the inning to give closer Ryan Watson a five run lead in the ninth. Watson then recorded a 1-2-3 inning in the ninth that clinched Victoria’s sixth straight win.

The HarbourCats will go for their seventh straight win tomorrow afternoon in a Canada Day matinee, first pitch is scheduled for 1:00.