Bellingham’s Chase Illig was one of three Bells to have three-hit evenings Wednesday, notching the game-winning RBI in the top of the ninth inning of the 6-2 win over Victoria (Photo: Christian J. Stewart)

August 2, 2017, Victoria, BC – In the final home game of the season for the Victoria HarbourCats and one that had huge playoff implications in the West Coast League North Division, the Bellingham Bells would bust open a tense 2-2 tie with four runs in the top of the ninth inning, to escape with a 6-2 win over the HarbourCats in front of just over 3,000 fans at Royal Athletic Park in Victoria. 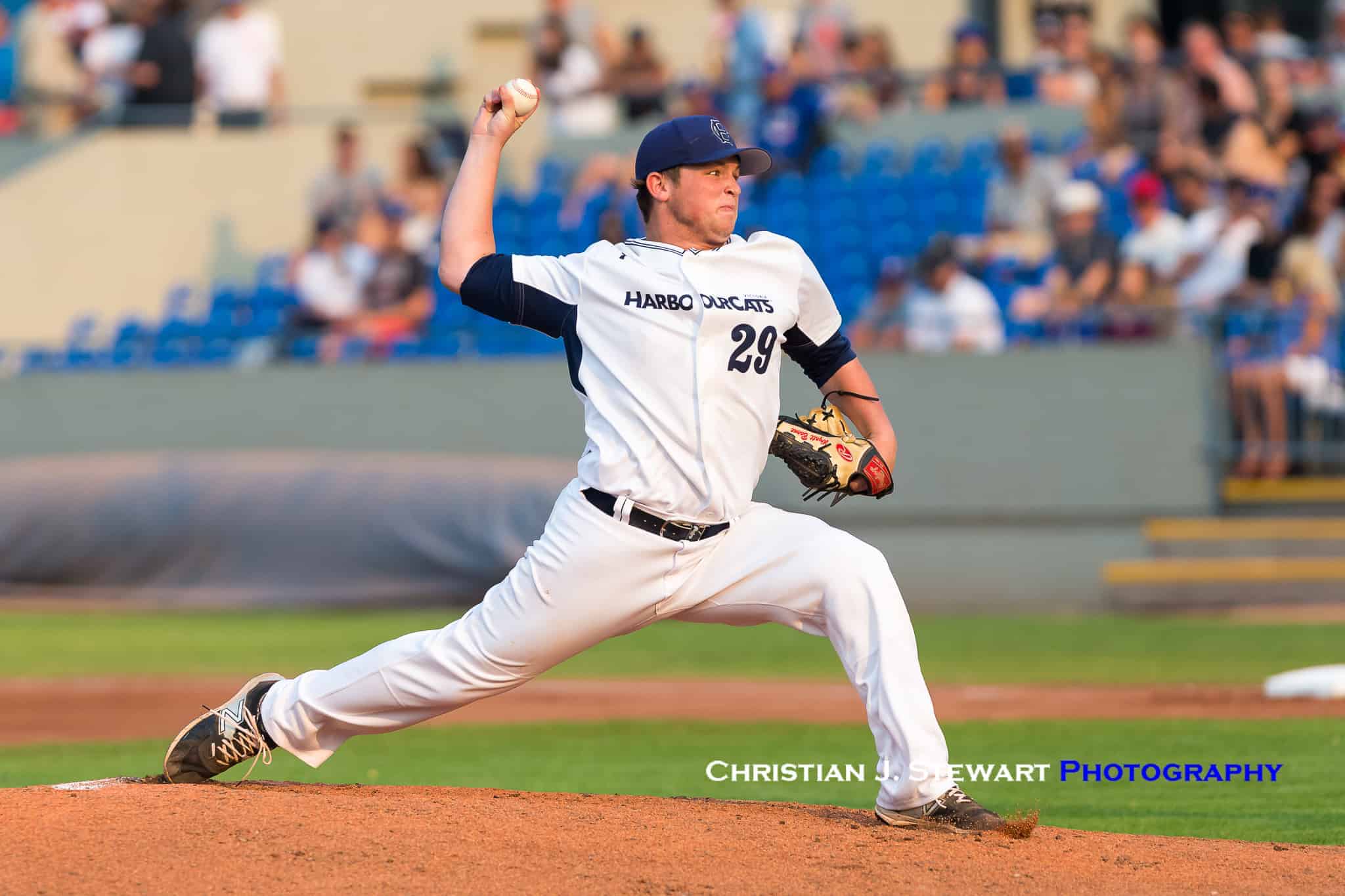 The Bells win keeps their North Division playoff hopes alive, as they now move to just a half game back of Victoria and the Wenatchee AppleSox, who are now tied with the HarbourCats for first.

The AppleSox were once again idle on Wednesday and could only scoreboard watch, as continuing heat and air quality issues in the Wenatchee Valley (due to smoke from BC forest fires), forced cancellation of the scheduled double-header with Corvallis. That double-header will now be played in Yakima, at the Yakima College Yaks field, at 11:00 AM on Thursday morning. The third game in that series will now be played, if it is needed to decide the Division winner, on Monday in Wenatchee. 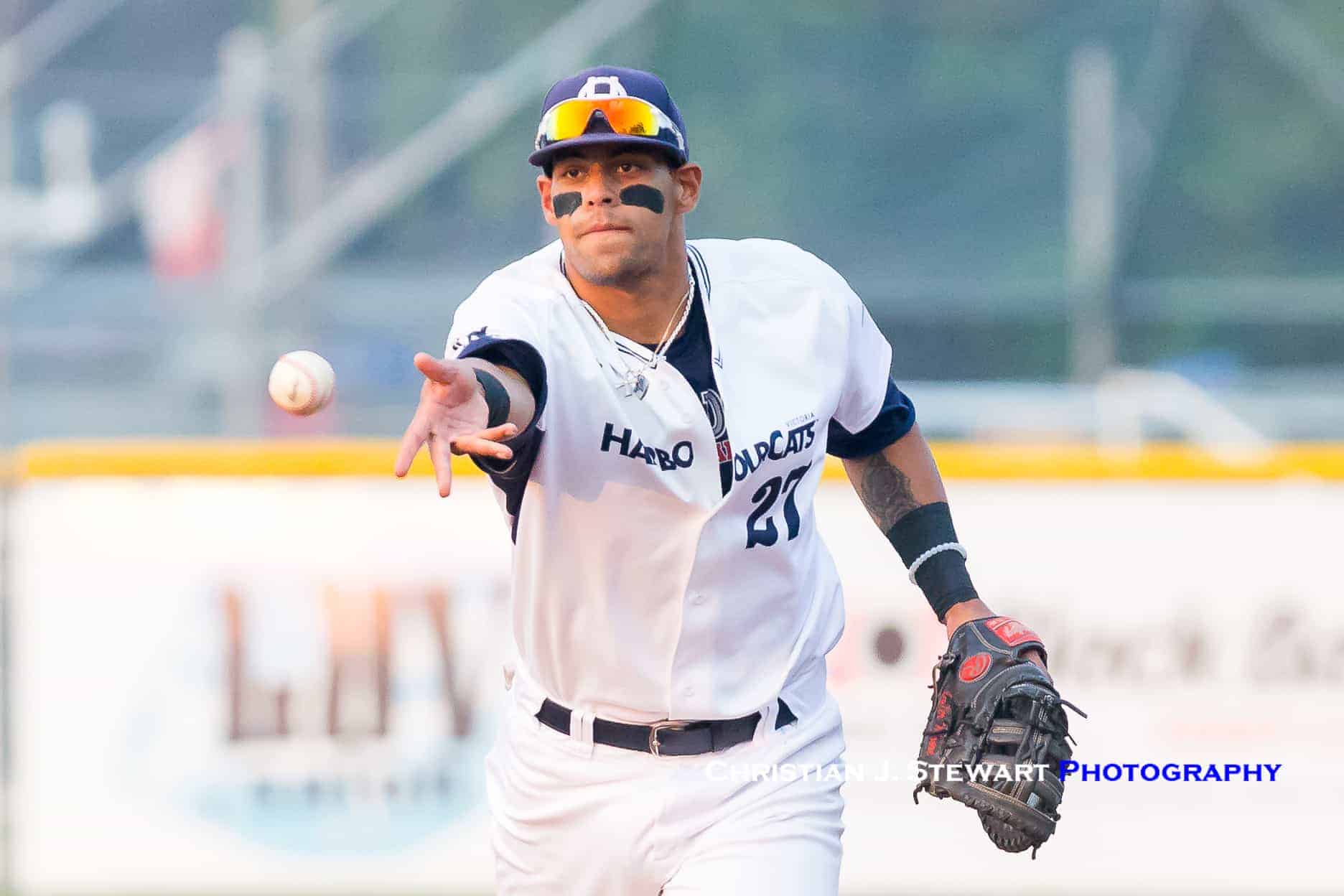 The Bells ninth inning rally came off normally reliable HarbourCats closer Travis Kuhn, who after pitcher Cole Masik walked Brendan McClary to start the inning, gave up a single to Austin Shenton, an RBI single to Chase Illig, his third hit of the evening, and then a two-RBI double to Max Flower. A sacrifice fly capped the inning and put the Bells up 6-2.

That was enough for the Bells top closer Josh Zavisubin to come in and retire the HarbourCats in order in the bottom of the inning to close out the key win. 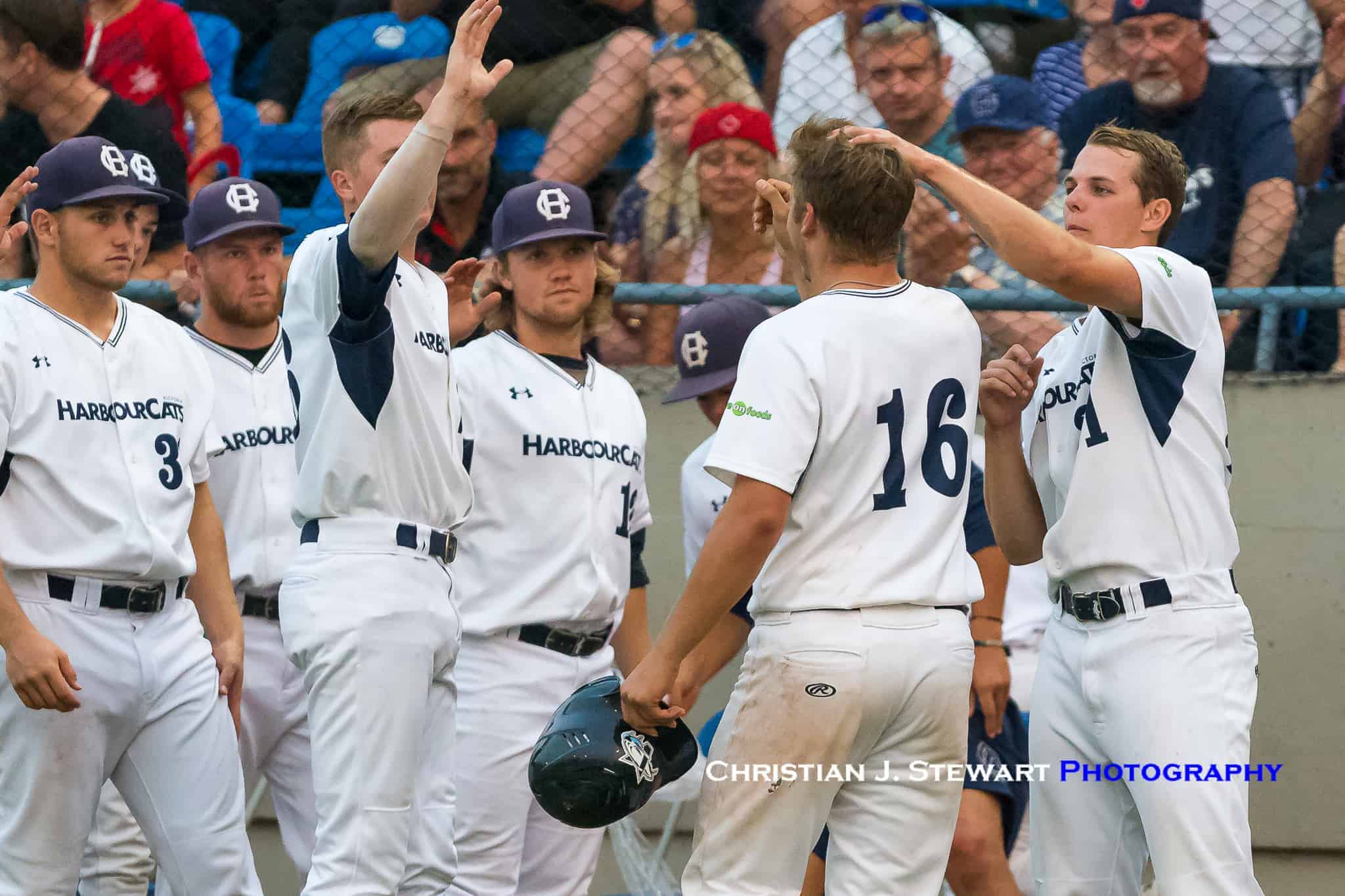 Shane McGuire (16) gets a pat on the head from Hunter Vansau (right) after his fifth inning home run tied the game 2-2 (Photo: Christian J. Stewart)

The late HarbourCats collapse ruined what was some great pitching from starter Wyatt Boone, who flirted with danger every inning, but managed to keep the Bells scoreless after four innings of play and thanks to a run by the HarbourCats in the bottom of the fourth, left the game with a 1-0 lead.

That lead did not last long, as the Bells, thanks to a two-run, opposite field home run from Shenton off HarbourCats reliever Dylan Thorp in the top of the fifth jumped back in front 2-1. 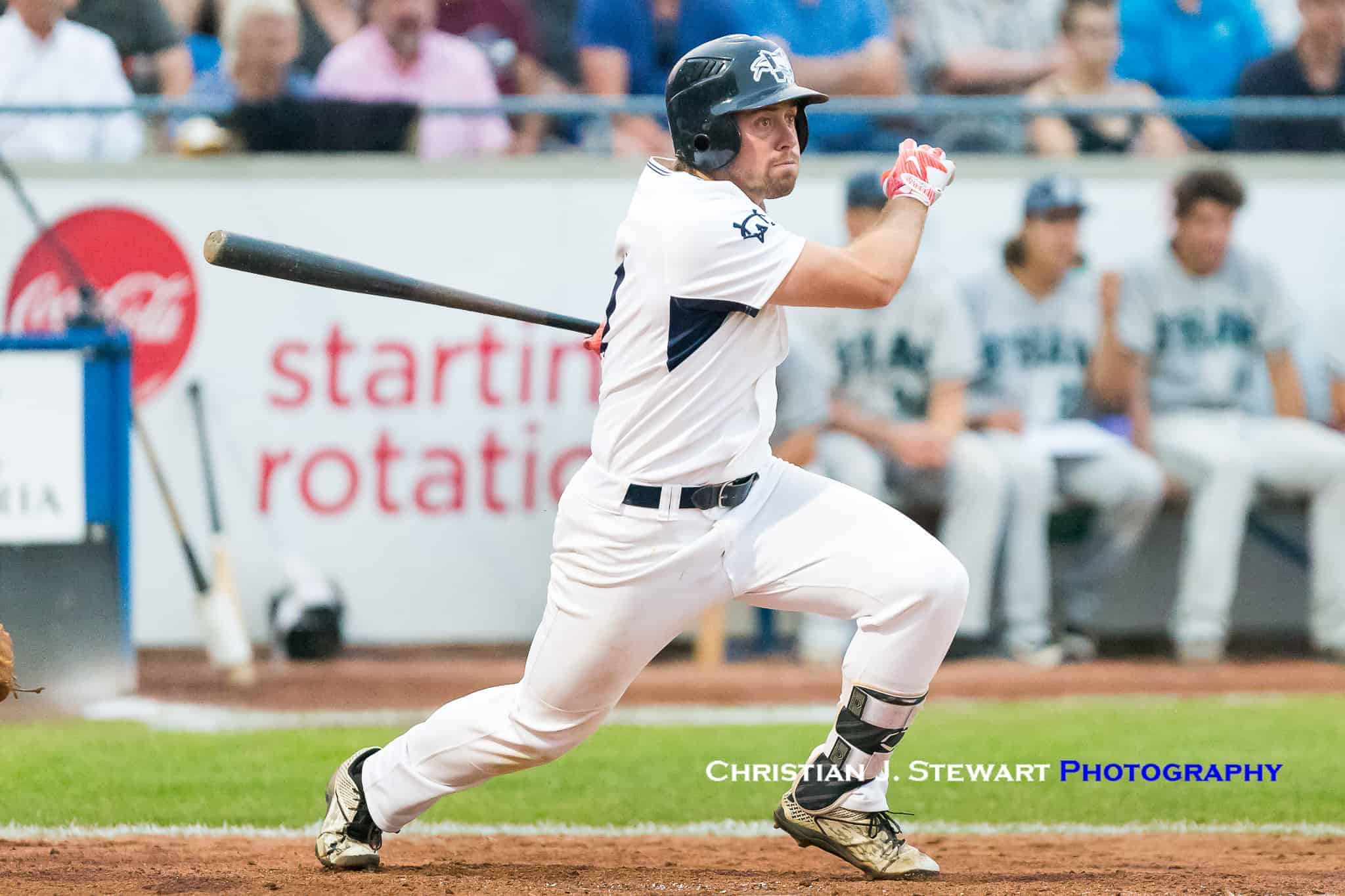 Tucker Johnson heads to first after a base hit during Wednesday’s game (Photo: Christian J. Stewart)

A solo home run from HarbourCats 2017 MVP Shane McGuire in the bottom of the inning would get the Cats right back into it and then some great relief pitching on both sides, including scoreless innings from HarbourCats reliever Garinder Sarana, Stephen Wade and Mikey Musselwhite would take the game into the pivotal ninth inning tied 2-2 and set the stage for the Bells’ late heroics. 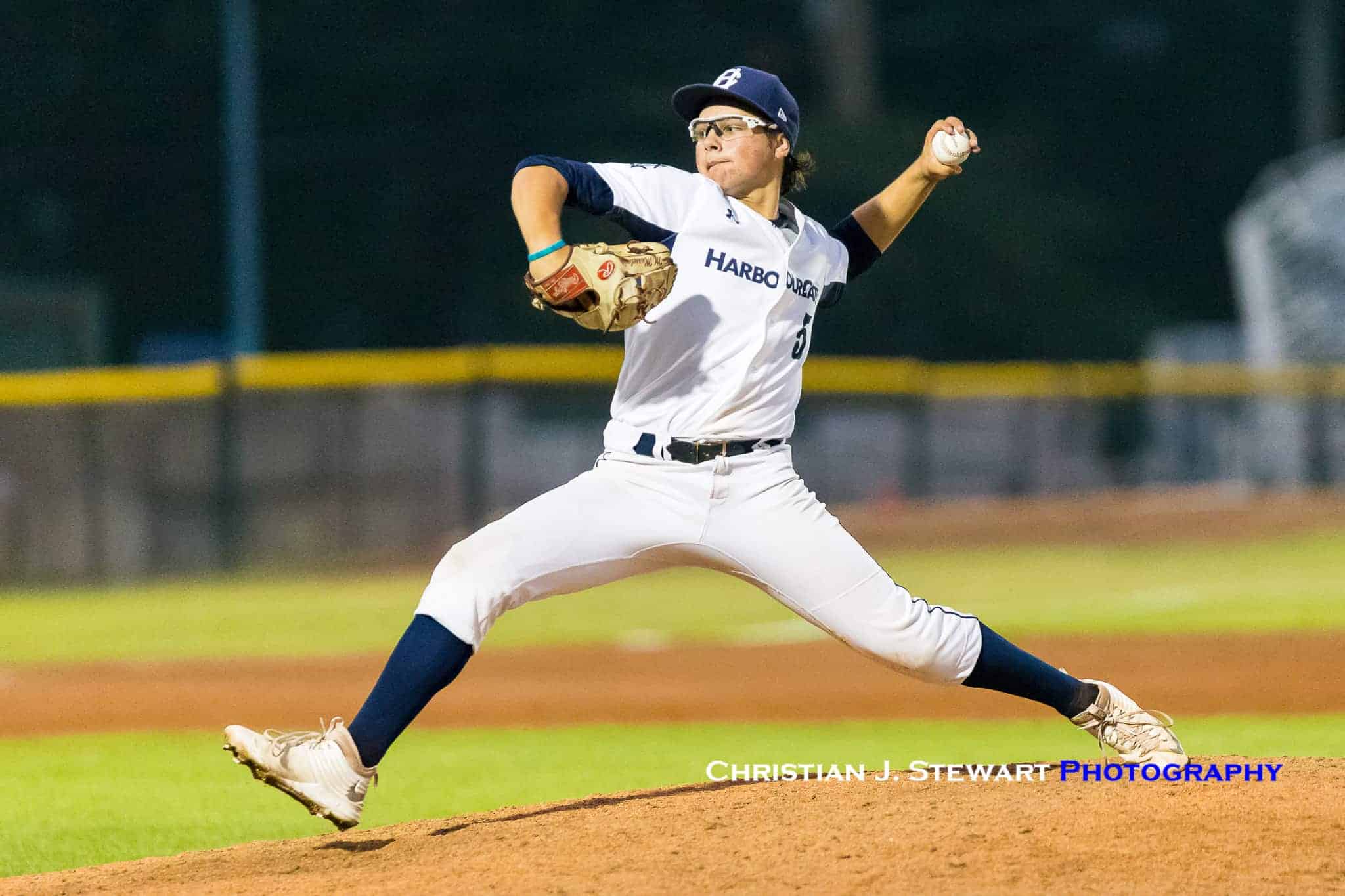 Mike Musselwhite was one of three Victoria relievers to spin scoreless innings on Wednesday night against the Bells (Photo: Christian J. Stewart)

The Bells two, three and four hitters – McClary, Shenton and Illig – did the bulk of the damage to the HarbourCats Wednesday, notching three hits each and scoring five of the six Bellingham runs. McGuire was the only multi-hit player for the HarbourCats adding an earlier single to his home run. 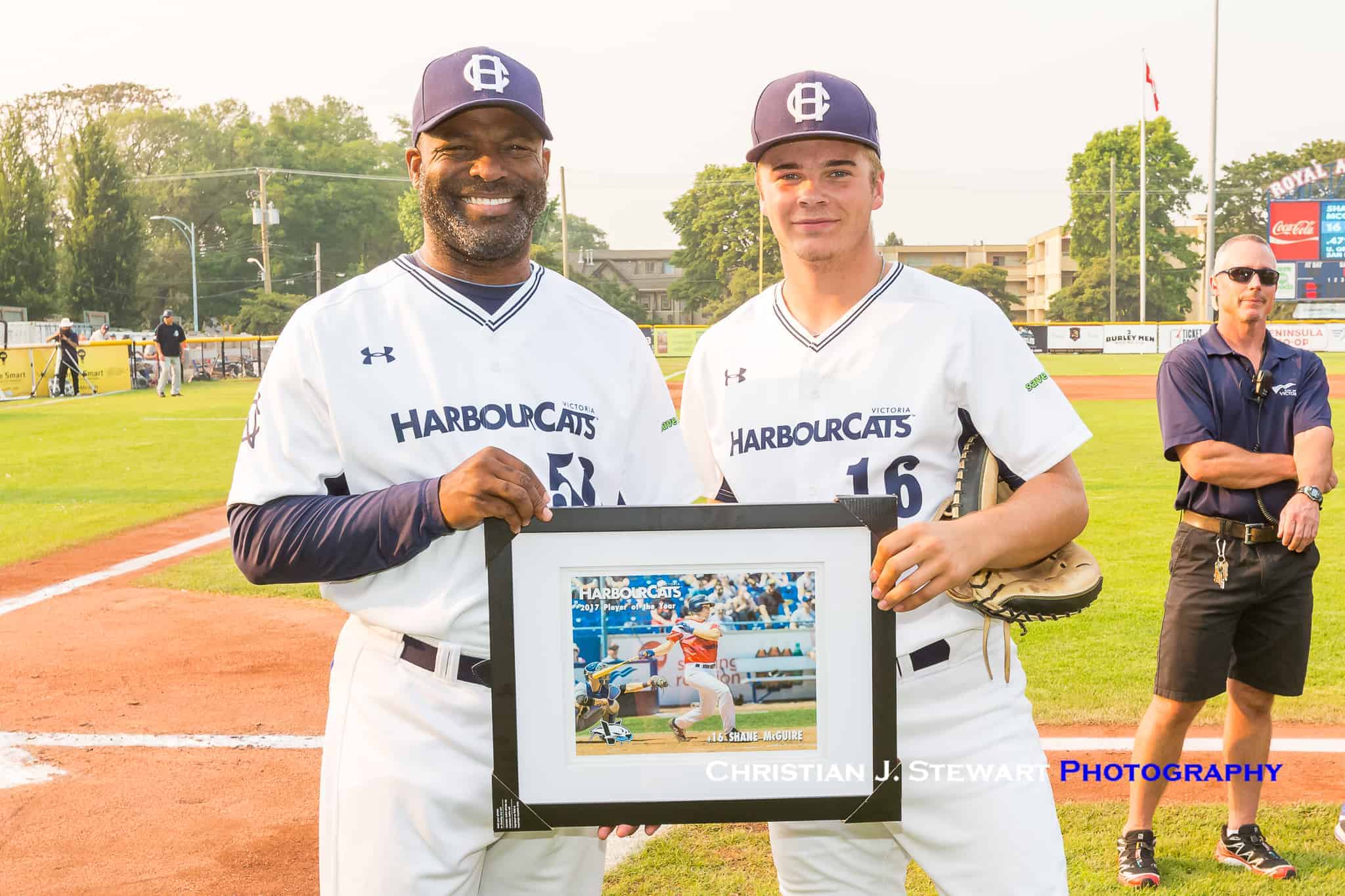 The Bells Keenan Lum, who held the ‘Cats to a walk and a hit over two innings of work, gets the win in relief, while Cole Masik, who was responsible for walking the eventual winning run, takes the loss for Victoria. 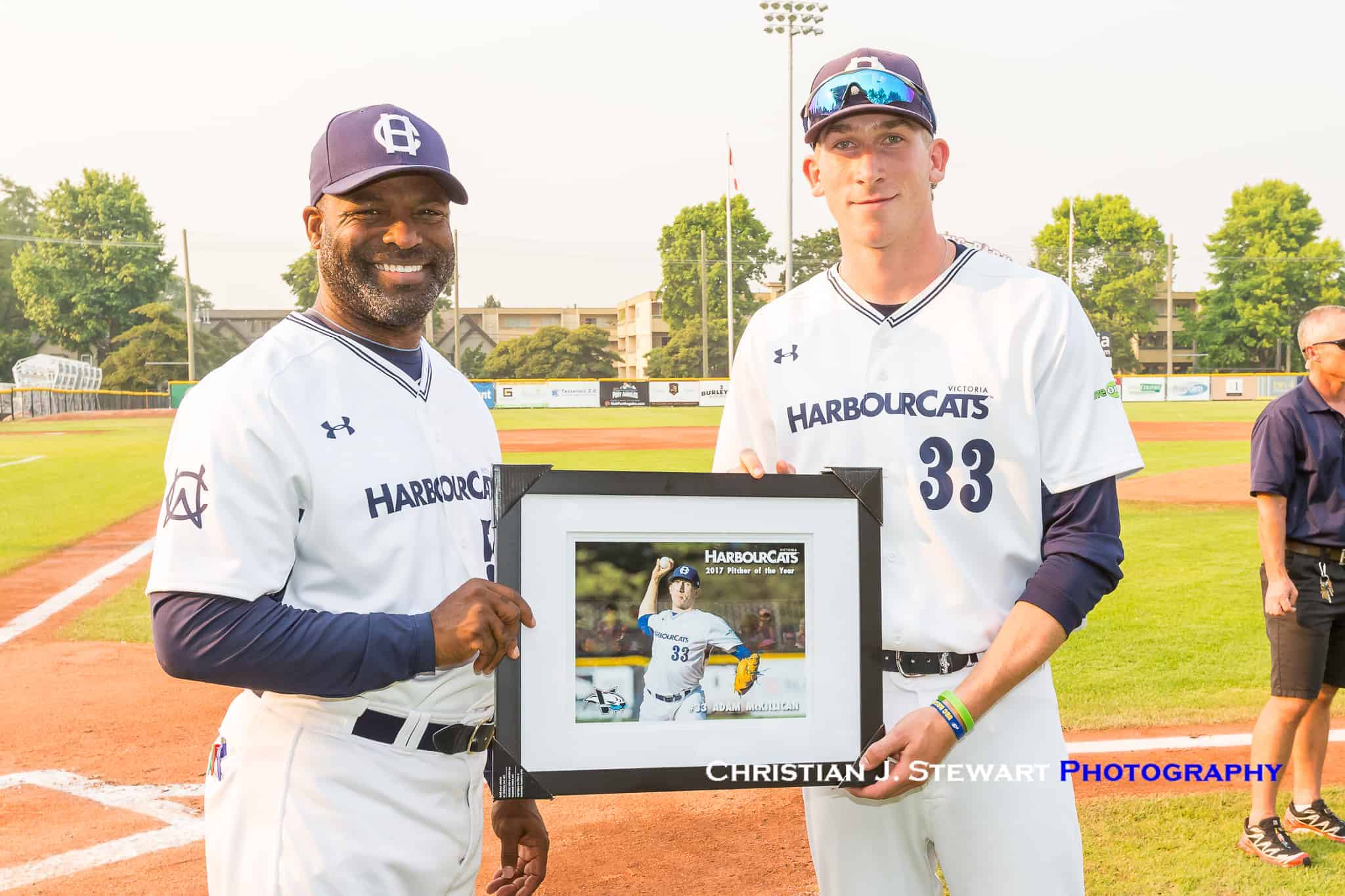 Adam McKillican was awarded the Pitcher of the Year Award prior to Wednesday’s game (Photo: Christian J. Stewart)

The HarbourCats now have a pair of days off to nervously scoreboard watch before heading to Port Angeles for two must-win games against the Lefties on Saturday and Sunday. The Bells also have a day off tomorrow, and then entertain Wenatchee in another pivotal three-game series starting Friday in Bellingham. Prior to that, the AppleSox will try to complete the first two games of their series with Corvallis on Thursday in Yakima, weather and air quality conditions permitting.

Game times in Port Angeles for any fans who want to take a quick trip over on the ferry to catch the final two days of this exciting nail-biting finish are 6:35 pm on Saturday night and 1:05 pm on Sunday.  Note, the final ferry back from Port Angeles on Sunday is at 9:30 pm.

Cat Scratches: The end of season attrition continues with consequences impacting game play.  On Wednesday night, newcomer Cole Masik was forced to start the ninth inning, instead of perhaps regular closer Kuhn, so that he could get in another appearance. Players need five appearances in order to be eligible for playoffs.  This is also a primary reason why Sarana, Wade and Musselwhite all came in for just one inning and that pitcher Garrison Ritter made a defensive appearance in left field with two outs in the top of the ninth inning. Things won’t get any easier for the dwindling roster in Port Angeles, as IF Cole Weiss, P Wyatt Boone, OF Riley Zayicek, OF Sam Cachola, P James Bradwell and OF/P Connor Whitney departed for school following Wednesday night’s game.