VICTORIA, B.C. – The Victoria HarbourCats are very pleased to release the team’s schedule for the 2017 schedule.

The 2017 schedule can be viewed in its entirety on the HarbourCats website– http://harbourcats.com/calendar/list/

The coming season will see the introduction of a new opponent with the Port Angeles Lefties joining the WCL. Port Angeles represents a new geographic rival for Victoria, separated by only a ferry sailing across the Strait of Juan de Fuca. The distance between the home plates — 22.29 miles.

The HarbourCats open the season in Port Angeles on June 1 as they provide the opposition for the Lefties’ first ever game at Civic Field. It will be the only WCL game played that day.

Opening Night at Royal Athletic Park is scheduled for Monday, June 5 with the Wenatchee AppleSox in town to begin a three-game series.

The HarbourCats will play the Kitsap BlueJackets at 1:05pm on Fathers’ Day Sunday, June 18. It will be the first non-league game of the season with Kitsap, a former long-time member of the WCL, now in the Pacific International League.

School Spirit Day, which was immensely successful in 2016, returns on Monday, June 19 when the HarbourCats play a special 12:05 matinee against Port Angeles. School groups totalling more than 1,600 students attended the inaugural School Spirit Day in 2016.

The defending WCL Champion Corvallis Knights will be in Victoria on June 20-22. It will be the Knight’s first visit to Royal Athletic Park since 2014.

HarbourCats fans will again have the chance to celebrate the Canada Day Weekend at the ballpark with the Cowlitz Black Bears in town for a three-game series June 29-July 1. Fireworks will again highlight ‘Canada Day Eve’ following the 6:35pm game on June 30 and will be followed up by a Canada Day matinee at 1:05pm on July 1.

Fireworks Nights are always a fan favourite and will return in 2017 with further dates to be determined. HarbourCats fireworks displays rival the best pyrotechnic shows in Victoria with a spectacular 18-minute display set up in centerfield following the baseball game.

The Burnaby Bulldogs will play their first-ever games against the HarbourCats, with a two-game weekend series on July 15-16. Game times will be 6:35pm and 1:05pm.

The all-star break will take place July 17-18. The Yakima Valley Pippins will host the 2017 WCL All-Star Game at Yakima County Stadium on July 18.

The HarbourCats’ Canadian cousins, the Kelowna Falcons are in Victoria on July 25-27 and the home schedule concludes with a series against the Bellingham Bells, 2016 playoff opponent of the HarbourCats, July 31-August 2.

The 2017 regular season concludes with a two-game series in Port Angeles on August 5-6.

A full promotions schedule will be released closer to the 2017 season.

Season tickets for the HarbourCats 2017 season are on sale now. 2017 Season tickets purchased by November 7 include free 2017 playoff tickets.

The offer is contingent on the HarbourCats qualifying for the playoffs, which they did in 2016 after setting a league record for wins. The HarbourCats have increased their win total in each of their first four seasons.

Seating location and pricing options are as follows—

*All prices listed are base price, and do not include fees or GST.

The HarbourCats Hotstove is returning and will take place Saturday, November 5 at Yates Street Taphouse. 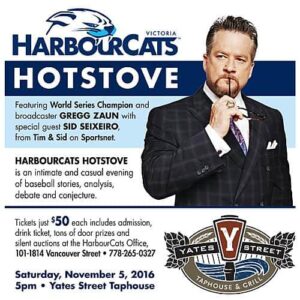 The event will be headlined by ‘meet and greet’ as well as Q & A sessions with special guests, 16-year MLB player and current Sportsnet baseball analyst Gregg Zaun, and Sportsnet personality Sid Seixeiro.

Local personality Mira Laurence will serve as the evening’s emcee.

Tickets for the event are on sale for $50 and include admission, drink ticket and door prizes. Silent auctions will also take place throughout the evening.

There will be special offers at the Hotstove on 2017 HarbourCats tickets (vouchers) and merchandise.

Tickets are available by visiting or calling the HarbourCats office: 101-1814 Vancouver Street/(778)-265-0327. More information at: http://harbourcats.com/packages/harbourcatshotstove/

The HarbourCats are staging their second consecutive fan vacation to Seattle in 2017 to see the Blue Jays take on the Mariners.

The 2017 vacation takes place June 9-11, 2017 and will include:
Travel on Wilson’s Transportation buses from to and from Victoria and Seattle. Ferry cost also included.
Field level tickets for all three Blue Jays @ Mariners games at Safeco Field.
Two nights at the Hilton Embassy Lynnwood.

Total cost is $798 per person (based on double occupancy). Different rates available for triple as well as single occupancy.

Registration for HarbourCats season ticket holders is $725 (based on double occupancy). The trip is not expected to interfere with the HarbourCats home schedule, as the team is expected to be on the road during this time.

Off-season hours are as follows: